Any tips or tricks

for getting a 17-foot, 48# kayak into webbed storage straps on a wall? Is this something one person (who is not a body builder) can do? Or do you need at least two? Not sure of the height of the straps yet as they were removed to paint the pool wall and haven’t been re-installed yet. I did make a request they put in at least one or two sets lower than in past years and hope that’s done.

Any reason you can’t get one end propped onto one strap then slide or pull the boat forward? Or are the straps anchored in a way they wouldn’t take that particular force?

If there are boats under your slot it’d make the pulling part harder, might have to just push.
Later add on that one - if the straps are too far apart to be able to balance a boat from the stern, may need to put the nose onto the front strap then slide it froward and back from the side. Where you run into if-there-are-boats-in-lower-slot issue.

With plastic boats I sometimes lift the bow into a high cradle with stern rolling a bit on the floor, then lift the stern up and secure it. If you threw down enough padding between your stern and the floor — yoga mats? AstroTurf? — maybe you’d be comfortable trying the seesaw with composite. Not ideal but better than a drop or injury.

2 suggestions - Use mechanical support of portable saw horses or similar to elevate and support kayak before being held by webbing. Or affix something between each web loop to keep them from sliding away from other and towards tapered end of hull. Each assumes webbing is hung from above. If attached to wall they are less likely to move.

"………… webbed storage straps on a wall? "
Kinda depends upon how the straps are hung from the wall.

Thanks, all. Wall is concrete block and the straps are bolted in. Floor is concrete, but carpeted. Only time I had a kayak in the straps was my Skylark ( in 2014) and the guys who volunteered to place it in the straps dropped it. Thermoform is tough and there was no damage, but I don’t think Kevlar would survive such an impact unscathed.

Since then I’ve used only floor space for storage, with foam blocks under the bulkhead seams. Not concerned about keeping the Fathom on the floor but thought maybe the wall straps would be a better place for the Prana as during swim meets, they do allow people in that area since the bleachers are in front of the kayak storage wall. And it wouldn’t be moved if there’s a boat in the slot above, as has happened with the Fathom. That’s no biggie so long as whoever moves it puts it back properly supported.

The other fly in the ointment is getting the boat off the wall should I want to use it for pool practice.

Unsure of the best option. Thermoform sure is easier to deal with than composite.

We store our two kayaks on straps against the basement wall. I’ve found that by putting the lower one very near to the floor (if you don’t need that floor space) I can get a 55 lb kayak into the straps myself. I can just rest one end on the floor while strapping the other one in. The kayak ends up being only a few inches off the floor.

A picture of your storage set-up might help generate more ideas. It sounds like it’s mostly awkward to try to stick one end in a closed loop while managing the weight. It’s possible that one rope loop suspended from the ceiling in the right spot might do the trick by supporting one end while you get the other end secure. I’d be curious to know how the boat is carried once it’s off the rack (just by you? Maybe holding it by the edge of the cockpit?). Another possibility is to use a pair of director’s chairs and put them up against the wall, set the boat on the chairs and then raise one end at a time into the straps. The chairs would also break the fall if something bad happened. They also fold up when not in use. 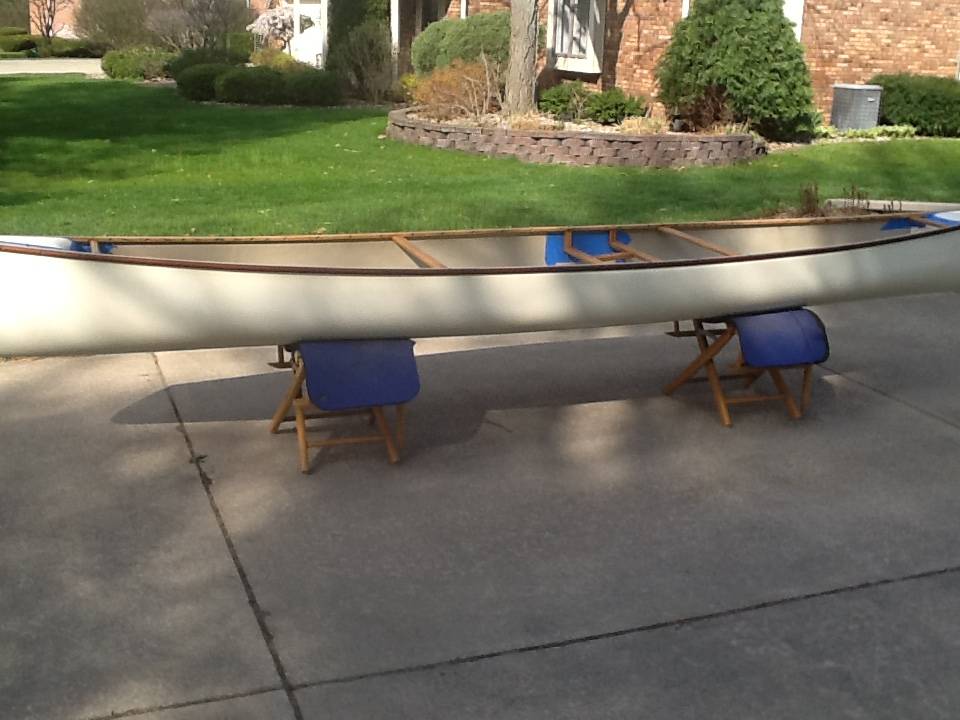 @Doggy Paddler said:
We store our two kayaks on straps against the basement wall. I’ve found that by putting the lower one very near to the floor (if you don’t need that floor space) I can get a 55 lb kayak into the straps myself. I can just rest one end on the floor while strapping the other one in. The kayak ends up being only a few inches off the floor.

That would be ideal, having low straps. Straps were set much higher in the past. If using the top set, you’d need to stand on a chair. Or be over six feet tall.

Lacking a garage, I suspend several of my kayaks in “trapezes” hanging from the ceiling in my walk-out basement. I’ve used nylon straps and poly rope and in both cases I thread the material through 2 to 3’ lengths of hard foam pool noodle to keep the loops open. This makes inserting a bow or stern into the loop much easier, especially solo, and also cushions the hulls. You can also buy or make split noodles (use a sharp paring knife to one side lengthwise) so you could slip the noodle over an in-place loop.

I don’t use fixed loops, BTW. One end is attached and there is a hook beside that attachment point. The strap or rope is twice the length of the distance from floor to the mounting height and has several overhand loops on the free end. I lay the straps/ropes along the floor and center the boat on them. Then I lift one rope until that end is off the floor and place the closest loop over the first hook. Then walk to the other end of the boat and lift and hook the second rope, hoisting the boat and again locking a loop into that hook. If the boat needs to sit higher, I go back and forth between the two ropes and “walk” the ends progressively up the wall, one loop at a time. This works quite well with long and heavy boats. When I do this in the basement to get a boat tight to the ceiling, I use a step stool to be able to reach to snag the final loop on the hook.

At the bolts do you think you can wrap a loop of 3/16" line around it to attach a small pulley to each. Throw two web loops around the kayak where you will lift them and pull up the kayak one line at a time. You’d need a tie off . Photo of the Wall?

Will stop at the pool after work and take a photo of the storage area and wall.

Instead of having help with the boat, maybe someone else can deal with the straps while you hold the boat and make sure it won’t fall.

Glad I stopped by the pool as the straps were re-installed and they’re lower, at least the bottom ones are. My recollection is that the walls were block but now they’re covered. Unsure if my memory failed me or if the wall covering is new, but glad it’s there. Given the location of the straps, I don’t think getting the Prana in them will be as challenging as I feared. I’ve got a set of 24" stands which will make it even easier to do on my own. Will bring some 303 as the strap buckles are balky. There’s five sets of double straps and storage opens November 1 - that’s the only downer as if I want to be sure to get on the lower level, I’ll have to bring the kayak in then. But will keep the Fathom at home until I’m iced out.

@TomL In the pool area I use a cart from where the boat is stored to where I enter the boat from the pool. When done I cart it to the rinsing area so I can hose it down well, inside and out, because chlorine is hard on deck rigging, etc. Blessings to whoever invented the wheel!

@Marshall I studied those attachments. With long enough rope, the bleacher rails could be the tie-off.

Thanks for all the help and ideas! 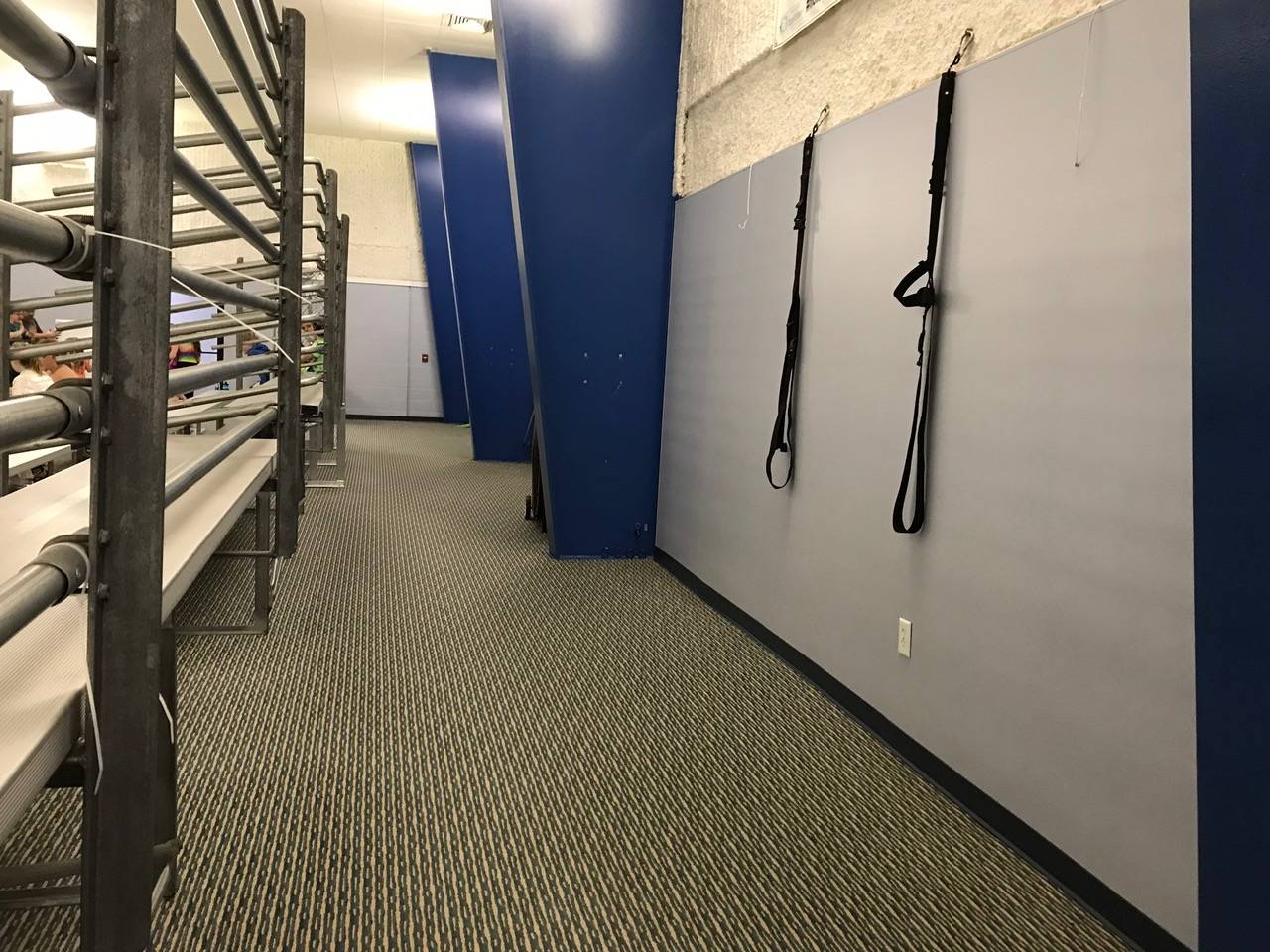 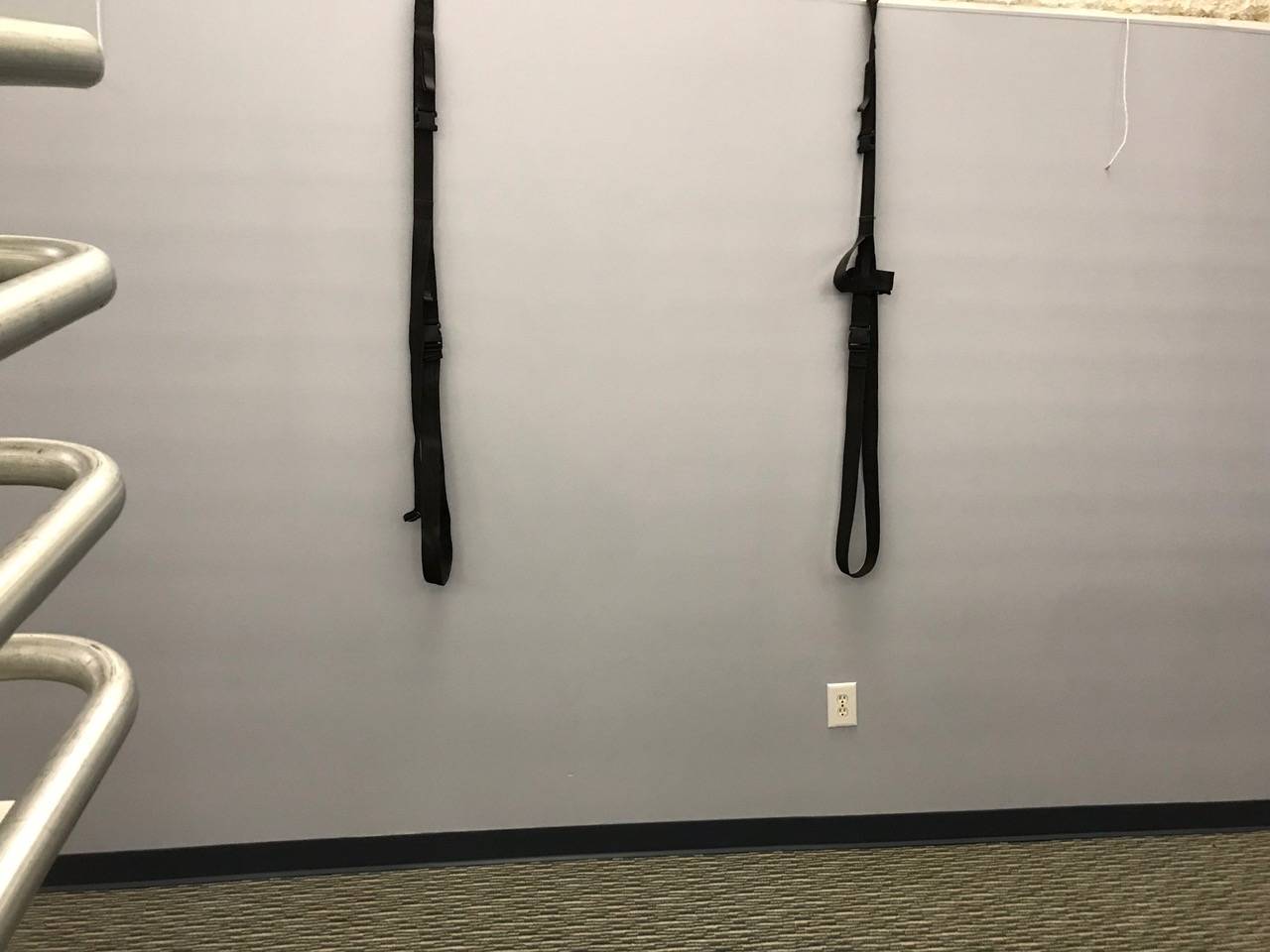 You’ve got eye bolts! Easy! If you go the pull route let me know. I’ll send you a pre-rigged system. Kayak sailing stock parts have other uses.

Marshall, you’re a great outfitter and MacGyver artist. If I don’t get in on the bottom floor, will give you a call. Thanks.