Anybody familiar with a Derek Hutchinson fiberglass kayak Naiad model or whatever this is?

Someone local to me is selling what they are describing as a 45 pound fiberglass British sea kayak they ID as a “Naiad, designed by Derek Hutchinson”. I can’t find any information on the model on line – they list it as 17’ x 20", seems to have an ocean cockpit, includes an electric pump and looks fast, gorgeous and very clean, almost un-used. At $500 I am very tempted to at least go look at it. Does this model look familiar to anyone? It doesn’t match any current models of P & H boats from what I could tell, unless it is an older Cetus LV. I know Hutchinson designed for many different makers. There appears to be a dolphin decal on the bow (as well as the Union Jack on the deck) but I can’t see any maker’s mark in the pics.

Not one I’m familiar with, but it looks like a great deal and a very good looking kayak. If I wasn’t 1700 or so miles away I’d sure go look at it!

Nice looking kayak. I’d sure check it out at that price. I think Wayne Horodowich was good friends with Derek Hutchinson so perhaps he might know something about the boat. He is a presenter at Canoecopia next weekend. They list the following email for him: study@useakayak.org

Gulfstream by Current Designs was a Hutchinson design, at least originally. It along with the Slipstream had dolphin logos and similar hatches. Less skinny than this boat, but a comparison of the original Gulfstream with this boat would likely show the hand of the same designer.

It looks close to the CD Andromeda…
Review…https://paddling.com/gear/current-designs-andromeda-kayak/

I love this one line from an Andromeda review…
"This is a perfect boat for an athletic intermediate kayaker who wants to learn courage and finesse. " 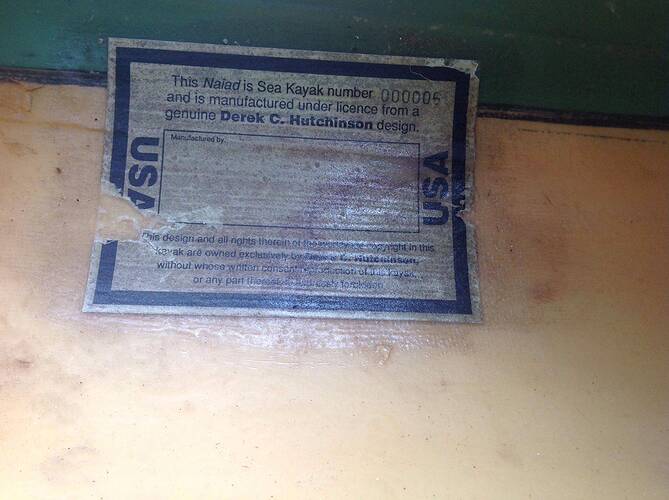 Found an article in 93 regarding it, but nothing significant

I messaged the owner last night but have yet to hear back – He’s only about a half hour from me. As I always tell the CL sellers, I show up when I say I will, I have a roof rack and I bring cash. Not a lot of demand for sea kayaks in Pittsburgh, so I am hoping I have a shot at this. Only problem this weekend will be that I just had to cancel my debit card due to attempted fraud (usage of account number detected in Hong Kong!) so I can’t get cash until my credit union opens on Monday. But I hope to snag this beauty if I can fit my middle-aged butt and cranky knees into that cockpit. My favorite boat is 20" beam but it has a generous keyhole. Honestly, even if I don’t fit it, I can probably resell it for more than $500 to an enthusiast. Hoping the shell is in good shape.

I agree that it does resemble a sleeked down Gulfstream.

At 20 inches wide, turning may not be its favorite activity. But it looks to be in great shape and slick thru the water.

My old Nordkapp HM came with a Chimp pump like that, which is most definitely NOT electric! Look at the fifth pic in the add to see it installed. You’re either supposed to reach back and pump the vertical handle (good luck emptying a full cockpit that way!) or have a partner do it for you, which is actually the intended method. About the only thing I found it good for was if I had water in your cockpit, I could lean the boat and use the pump to squirt water at my paddling companions. I removed it and replaced it with a day hatch, then added a third bulkhead, which to me is a far more useful setup than the pump. With the current setup, you could install an electric pump if you chose to, as the plumbing is already there. You’ll likely need it because the aft bulkhead is farther back, which increases the volume of the cockpit significantly (more to pump out), unless you stuff a float bag or inflated paddle float back there.

Another thing that the Naiad _appears _to have in common with the Nordkapp HM is a fixed skeg built into the hull (what VCP called a “modified” hull). On the Nordkapp, it made it very stiff tracking with a dangerous tendency to leecock, but that’s probably specific to that boat. Derek seemed to have a preference for relatively maneuverable boats, so perhaps there’s enough rocker built into the Naiad to make it handle well. There seems to be some indication of that in the photos. I actually paddled with Derek in my Nordkapp and he gave me a boatload of crap about it, so he was definitely aware of the skeg issue.

To me, the ocean cockpit is a huge plus, as that’s all I paddle. You have much better control and many more leg position options than you do with a keyhole. The narrow beam helps, too.

The wood stiffener down the center of the hull is something I’ve seen in older Necky boats. It’s a light, simple and effective way to stiffen a lightweight hull.

For the price and condition of the boat, I’d buy it just to try it.

Nope, it wasn’t me. Guy never responded to my message. Bummer. Not that I really “needed” another kayak.

I just hope it found a buyer who will appreciate it. A lot of people around here will just buy any shiny kayak under $500, without a clue about what it does or whether it fits them. I considered sending a followup to the seller to request that he pass my contact info on to the buyer and if they decide the boat is too scary for them once they’ve paddled it to get in touch with me and I’ll take it off their hands. The location where it was being sold is nowhere near any wateways, besides which it is sub-freezing here today, so I know they did not test paddle it.

Heard back from the seller and he said that an experienced kayaker who knew exactly what he was getting drove in from Columbus, Ohio (about 2 hours away) and picked it up. I need to check the CL listings more often – missed this one by 2 days.

About 20 or 25 years ago I bought a DH Reiver from from Southern Exposure kayaks down in Tequesta Florida. It was light grey or light blue as I remember so it may be the same kayak ( I cant open the Craigslist ad). I enjoyed paddling it but I found sliding in the small ocean cockpit a pain so I saved it for my daughter to paddle. The owner of Southern Exposure ( whose name I have forgotten ) was the sole importer of Dereks kayaks for a while and would have Derek ( and Nigel Foster) give kayak classes at his shop location for a number of years. After I took one of Dereks classes, I bought one of his kayaks. As I remember The Reiver I owned was made by one of the Florida fabricators that the Southern Exposure owner had picked under license to Derek H.
I’ll see if I can find a photo of my old Reiver

One of Dereks old books describes the evolution of his kayak designs including. The Reiver. I think I gave my book to my local kayak club

I found the book, Dereks complete book of sea kayaking which decribes the Reiver as “ the first kayak I designed completely in the US. The boat is 22 in wide and, considering its traditional narrow break. Has comfortable stability’s and excellent secondarry stability. Since it is a kayaks deck shape that governs its rolling qualities, the sheer line fore and aft makes the Reiver one of the easiest boats to roll”.
I guess I should have kept the Reiver
This book describes the evolution of the kayaks Derek designed, of which I owned 3.

Thanks for all the background on the DH kayaks, Joe. Always good to broaden the knowledge of excellent boat designs.