Anyone following the MR340 tomorrow?

Apparently the race had to be cancelled earlier this summer because the historic high water level made it too dangerous. It was rescheduled for November 12-15, but the full race was cancelled because of extreme cold air and water temps. In the cancellation memo the race organizers left the door open for any team or solo already entered who could do a sub 34 hour run on the 340.

There were three takers: a tandem canoe, a solo kayak paddler, and a pedal craft. Each one will be accompanied by a safety boat. Race starts at 7 a.m. tomorrow.

More than 500 boats and 700 people from all over the world signed up for the July race, but after it was delayed for months, that's now down to just four people.

My interest is in the Lake Superior canoe paddlers from the U.P. of Michigan.

Edited to add that one of the Michigan paddlers is Steve Landick. He and Vernon Kruger paddled the 28,040 mile “Ultimate Canoe Challenge.”

This is the current leader. He meets the rule that all vessels must be propelled exclusively by paddle power. Was averaging 12 mph earlier. Way ahead of the other two racers at present.

Looks like a pretty cool boat, especially if you have shoulder problems. No idea how it would handle wind and waves though. 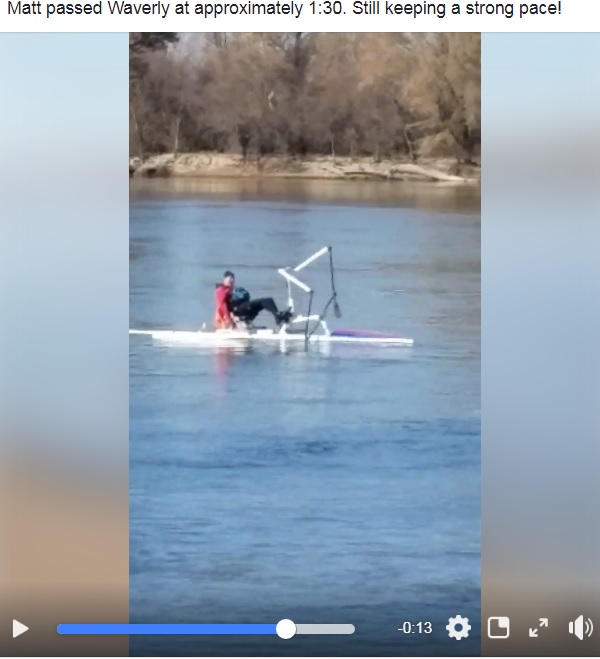 Race finished a few minutes ago. Solo kayak dropped out earlier today because of excessive icing on paddler and boat. The pedal boat, which held a hefty lead throughout the race, pulled out late afternoon because of racer fatigue and vision problems caused by UV rays. That boat is an amazing work of engineering.

That left the Michigan tandem canoe from the Upper Peninsula

. Their unofficial finish time is 35.27. The finish was live streamed and I was surprised the guys could even walk.

Three hundred and forty miles of nonstop paddling is mind-boggling. It’s like a Water Tribe challenge on steroids.

That’s quite a feat in those unfriendly conditions

That peddle/paddle boat was quite impressive.

That pedal boat had an eight mile lead and was 50 miles from the finish when it had to drop out.

Landick’s canoe was not your standard racing canoe. I’ve no idea what it’s made of, but it did have a working heater. 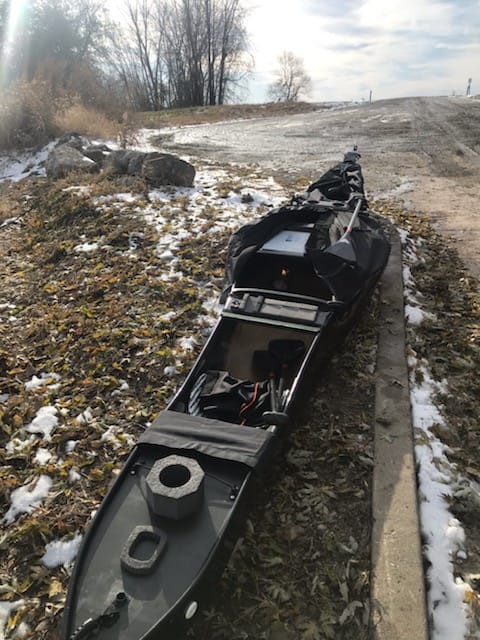 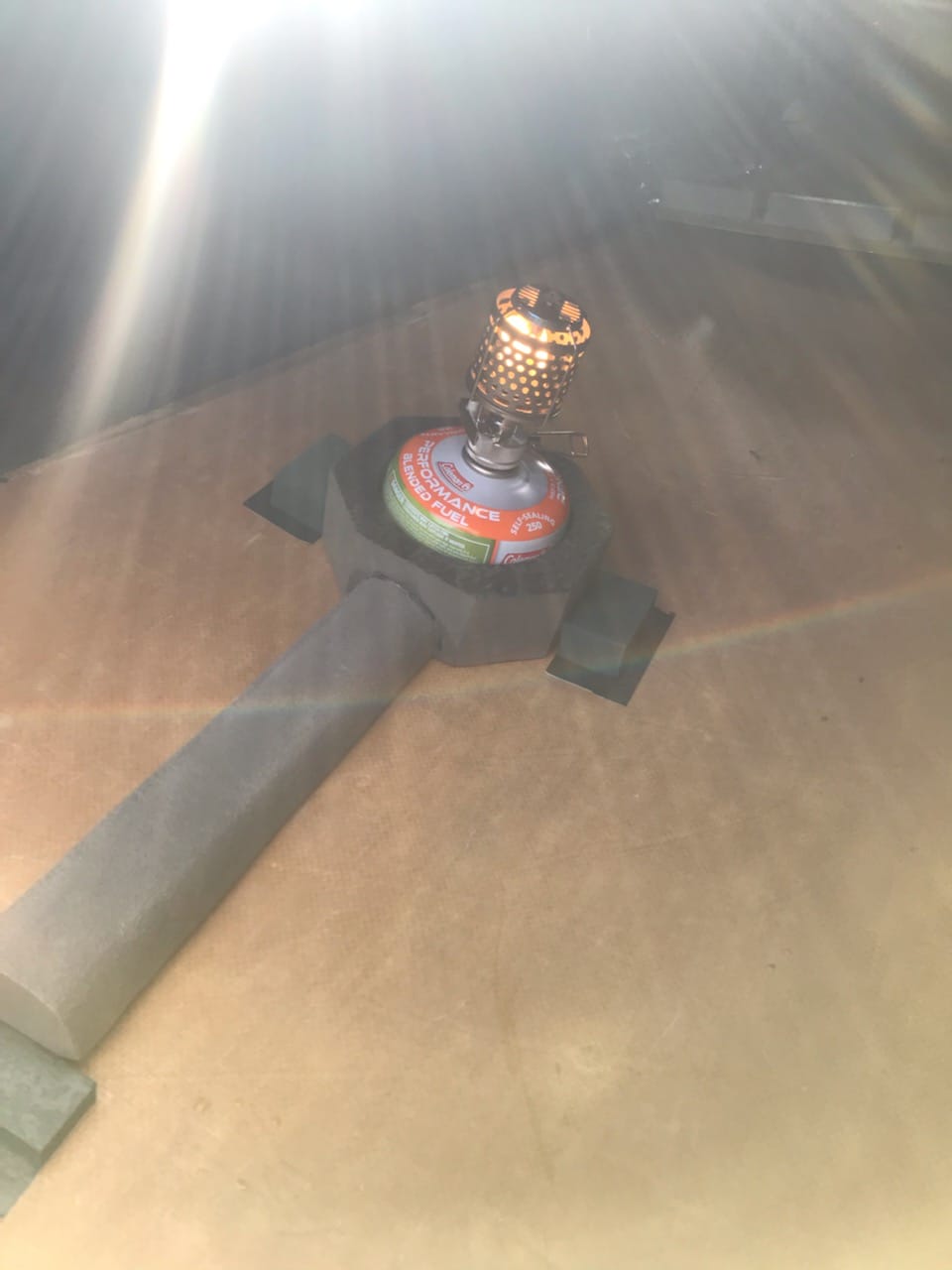 I was disappointed to see the pedal boat drop out as he was doing so well. His boat was an engineering marvel. I don’t know the full details, but he dropped out with complaints of poor vision due to what as been described as “day blindness” from the sun’s glare. It’s hard to see how this would happen with proper sunglasses, but again, I don’t know the details.

I’ve raced it before, and I was scheduled to do it again this year, but once it got pushed back to October my partner was out, and we didn’t even consider November. It’s a great race, and it really will let you know how good your paddling technique is!

Wow. Landick is a LEGEND. I mean, he already was, but this is one more feather in his 100,000+ mile cap. Verlin Kruger would be proud. How old is he now days anyways? Hes gotta be over 60, nay?

His boat looks like a 3x27 V1 pro boat derivative. the gunwales are tucked in so far forward though I wonder if its a V1 Corbin (which is basically a V1 hull with the gunwales further tucked in for the stern paddler). If they indeed did 35 hours in a V1, that’s an extremely impressive feat. Although they arent too bad stability wise, after a day of continuous paddling its a different story.

The boat appears to me as more or less a standard racing canoe. Looks to me to be either a Crozier or Savage River

Vore’s description of the boat: " It an oddball. Sort of a Landick/Jensen/Crozier one-of-a-kind. Hands down, the most versatile and best big-water C2 I’ve ever paddled. Steve and I have done 68 mile downwind runs surfing 3+ foot swells on the Great Lakes with it and it’s rock solid."

I’m fascinated with the heater. Was it to keep the paddlers warm or a boat de-icer?

Edited to add that Landick appears to be 66. Superman.

Steve Landick & his son had the canoe on the Hugh Heward a couple of years ago. It looked to be carbon fiber which makes sense. I think that they were training for one of the Yukon races.

I don’t know the full details, but he dropped out with complaints of poor vision due to what as been described as “day blindness” from the sun’s glare. It’s hard to see how this would happen with proper sunglasses, but again, I don’t know the details.

Saw a comment he made that he wasn’t wearing sunglasses or a ball cap. Swore he would never do that again.

Had to be painful and not just on the eyes.

I saw that as well, and I almost have a hard time believing it! I can’t imagine putting that much time in, both in training and in engineering, and be taken out by something seemingly as simple as putting on a pair of sunglasses.