****A friend is trying you talk me into entering a race. I stole this old thing from the rafters of my dad’s garage. It’s mine for now, as it hasn’t been properly hydrated in years. I don’t know what it is, or if it’s still legal by today’s standards.

The only identifiers on it are the remains of a clear sticker, center of the second pic (zoom in and you can see it), the blue mcra #38, and the shadow of a #88 beneath that.

I suspect the boat has been in Michigan it’s entire life. 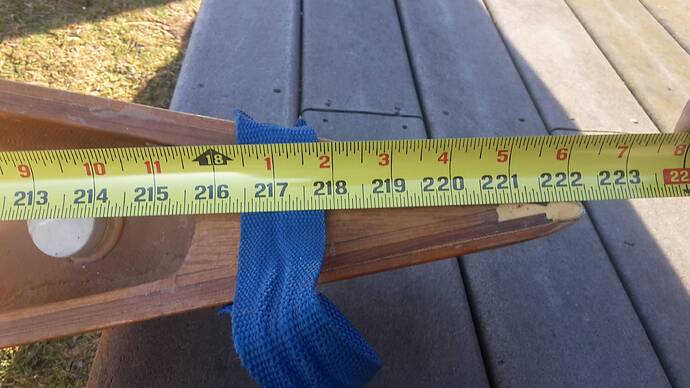 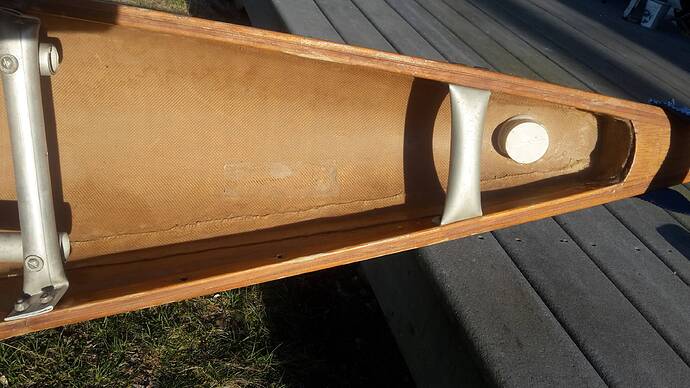 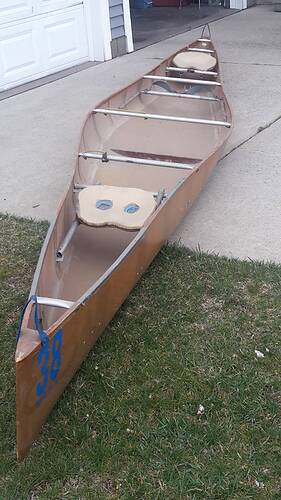 Was your dad a canoe racer?

Brother-in-law has an old Pro-boat that gets out on rare occasions. We call it Twitchy. It does get more stable the faster it goes.

Its definitely an old 3x27 pro boat. You can tell because in the center it flares all to the way to the gunwale. If it were a 4x32 it would have tumnblehome at the middle thwart.

Second, it appears to be a high volume adaptation of an old pro boat. You can tell this because most newer pro models have a very pointy nose and stern. If your pictures are not distorted, it appears that there is a lot of volume in the nose and stern compared to today’s models.

This will take away a little speed, but you probably wont notice if you dont race a lot. also, it may making jumping a wake / climbing a wave harder, but again, if you’re not trying to win the race this probably doesn’t matter.

On the plus side, higher volume ends will make the boat easier to trim, which is probably the single most important part of a successful race (or any paddle really). Also, the needle nose of some new pro boats means less comfort for the bow paddler (your feet get squished and the front station is quite cramped for me, with a 34x32" waist size 12 foot).

Have you paddled a pro boat before? If you have decent balance, it should be no problem but may feel tender at first. If you’re expecting a fishing canoe or kayak, stability wise, expect to swim. Pro boats are a reasonably stable craft in the grand scheme, but they quickly punish putting your head/shoulders over the gunwale. A strong brace will also get you out of a lot of close calls of capsize. I would highly recommend you paddle the boat a couple times with your partner semi-close to shore until you decode you’re happy with the boat. Paddling in some small waves is also good practice. If youre racing it will get bumpy.

Pro boats are amazingly fun to paddle, and a team in perfect sync is truly a beautiful thing. They dont like to turn without lean, they feel twitchy until you learn them, but when you master the boat and paddle with an experienced partner repeatedly, an amazing unspoken connection develops where you know exactly what the other person is doing without any communication. Your blade speaks. the boat glides. Zen.

Also I should add, if there is absolutely no name plate on the boat, it is very likely an old Crozier boat, built by the master builder Everett Crozier.

Crozier’s are some of the nicest racing boats ever made. You have a special boat.

I was hoping with that post to get lucky, and find someone here who might just recognise the Wenonah cousin Johnny used to race,

Rival, last time that boat raced you were in the bow. Placed third … from the other end.

If you zoom in on center of second pic you can see a little of the sticker that is the only maker kind of evidence. No plate of any kind.

Can I take another picture of some part of the layup/outfitting that would help?

As far as skills go, I’m dry right now, so must again be between swims. I’ve sat in that boat once.

@Tuna said:
I was hoping with that post to get lucky, and find someone here who might just recognise the Wenonah cousin Johnny used to race,

Rival, last time that boat raced you were in the bow. Placed third … from the other end.

Ah indeed. It’s been a while since that happened. I knew those seats had a familiar look. I was thinking second & I don’t remember why we wern’t first from that end. We were passed by some of the Amateur class that started somewhat later.

That boat was out on the Hugh maybe 10 years ago.

Stop down to the Dimondale Fire barn ~ 6 AM Saturday with it. Some of the folks getting ready to launch on the Hugh Heward might recognize it.