This has me wondering if watercraft made from ice have actually been used. 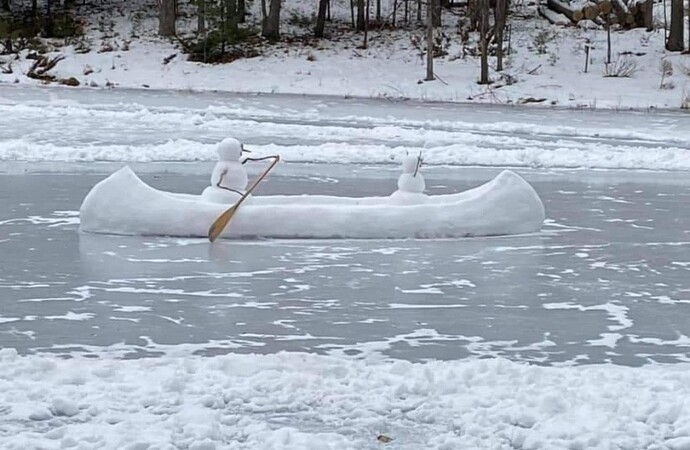 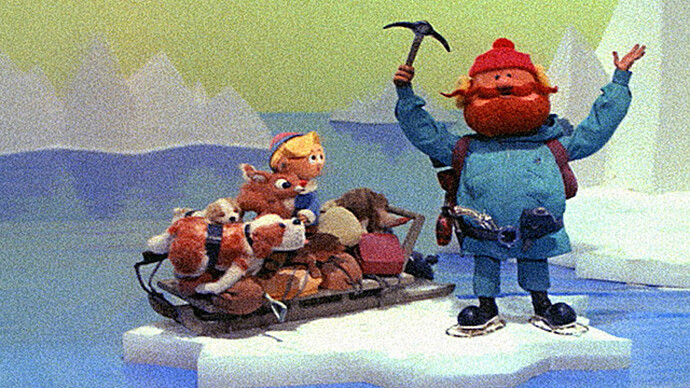 Too cold on the tush!

Have paddled on, thru, and around ice. And I think if such a craft were viable, cultures like the Inuit would never have bothered using driftwood and seal skin. 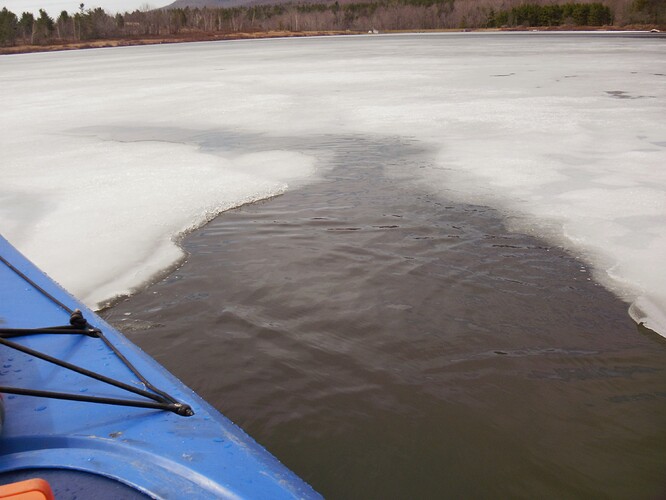 Nice sculpture. In SW Michigan the rivers and Lake Mcihigan are wide open which is a lovely status for mid-January. High 30’s tomorrow and 40 Thursday. Fingers crossed. 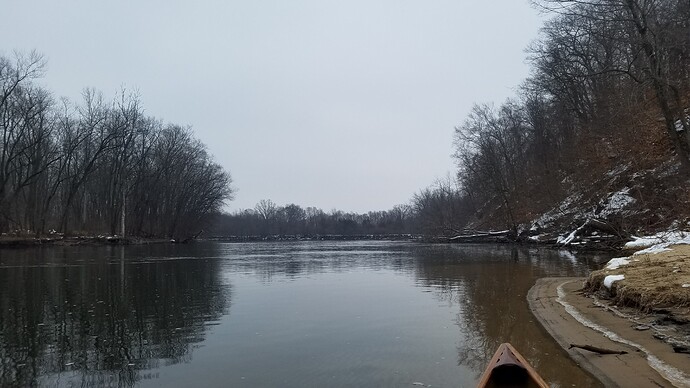 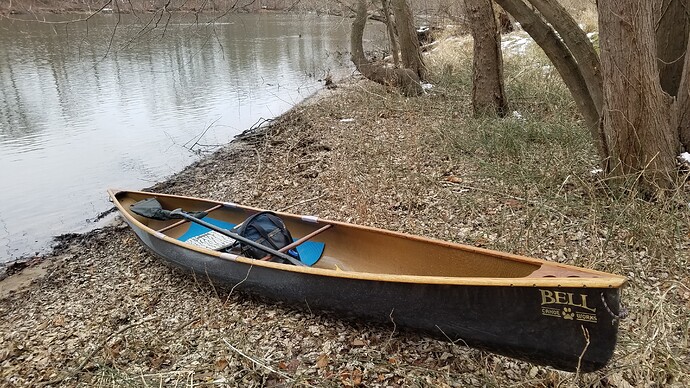 Since ice is less dense than water, it displaces well and is a viably buoyant material.

For several years in the late ‘80s and early ‘90s my outdoor club would join other such groups at the annual late Winter Ice Floe race on the Peterborough River in Ontario. Quite a weekend bash (Molson was a sponsor and there was a lot of their beer consumed. The organizers would cut 10’ by 15’ blocks of ice out of the thick build up along the riverbanks and the teams, all wearing wetsuits, had to pilot their floe down the river 2 miles to the finish line.

Our club was one of the early proponents of doing the race in costume theme which expanded the awards and resultant swag from the basic heirarchy of winners and “who drove farthest to get here” to judging on the quality and originality and even the acting of the costumed crews who rode atop or propelled the floes, much like frigid parade floats.

120" is just a little bit beamy for a river craft but with a dozen people pushing you tracking isn’t bad.

It was always a great on/in water event, especially for a lecherous old broad like me who greatly appreciated the “scenery” of the hunky Canadian firefighter and constable crews that often participated.

The Canadians actually get pretty close to this in real life - 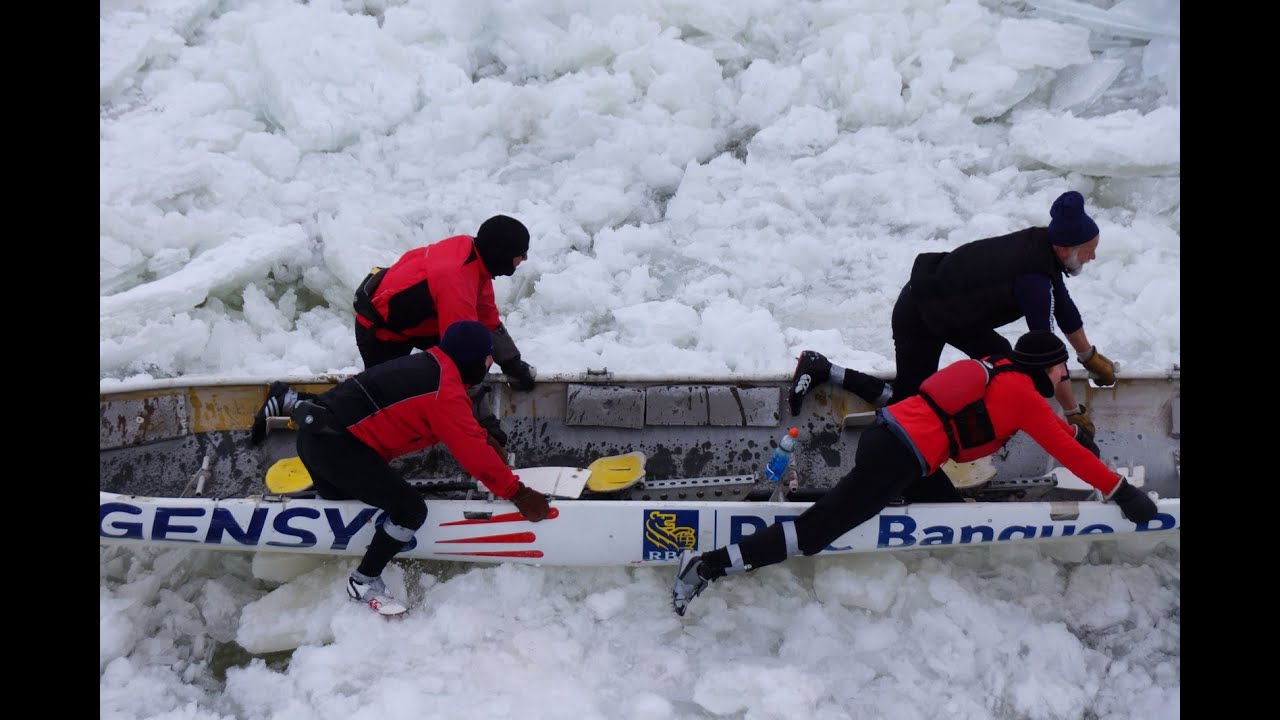 Somebody spent some time building that original ice canoe sculpture… looks like a fun afternoon. But the end result surely must be just as cold as aluminum to paddle in winter yet weigh even more. I think I like the Canadian’s approach better.

In WW2 the Brits experimented with an aircraft carrier made from ice with wood pulp built in. Unsinkable.

Very cool. It would be hard to prove if ice craft of some sort were ever used as all that’s left when they decompose is water.

The wood pulp was to increase strength and lessen the density so it would float higher. As I understand it the main idea was torpedo resistance - the material itself floated, so it couldn’t be sunk. All it had to be was big enough to land aircraft, not rollover in rough seas, and not break up if torpedoed.

I first heard of this project - and I bet you’ll get a kick out of this - when it was mentioned in a book I was reading in conjunction with a genetics class I was taking. (Bet you know why I’d be studying genetics…)
Seems it was a project for the war effort that was something of a distraction for Max Perutz. Perutz was an Austrian-born organic chemist who got involved in physics via X-ray crystallography. (A technique then used to figure out the molecular structure of minerals but not yet used for more complicated organic substances. Turned out his work and techniques were useful for others who later got to wondering about the structure of DNA.) But Perutz, if I’m remembering this story correctly, was in something of a race with Linus Pauling in trying to determine the structure of the protein hemoglobin… and answer the question of how the heck could a protein molecule containing iron, one known to pick up and later release oxygen, keep the iron from combining with the oxygen and rusting? So just how does that happen? Huh?

But this how constructing an ice/wood pulp aircraft carrier sidetracks someone (for a while) from closing in on the fundamental ways living things function at the molecular level. Torpedo resistant aircraft carriers were the more important thing for a genius to work on at the time. I guess everyone gets distracted, just a different levels of involvement…

Love watching those races. One year a team from Chicago got so misplaced on the bergs and were trying to find open water as their burg hurtled downstream( the tide really moves there in Quebec City) and wound up two miles downstream and got picked up by the rescue tug. Another time a team had to call it quits and while we were spectators we helped haul the boat up twenty feet up a bulkhead. They are made of steel and come in at 600 lbs. No kevlar!

And yes they wear crampons

In WW2 there was talk of making an aircraft carrier out of pykrete, a mix of ice and sawdust.

Pykrete is a frozen ice alloy, originally made of approximately 14 percent sawdust or some other form of wood pulp (such as paper) and 86 percent ice by weight (6 to 1 by weight). During World War II, Geoffrey Pyke proposed it as a candidate material for a supersized aircraft carrier for the British Royal Navy. Pykrete features unusual properties, including a relatively slow melting rate due to its low thermal conductivity, as well as a vastly improved strength and toughness compared to ordin Py...

And of course, Pauling went on to make successful canoes from Vitamin C!

Yup, he came to think Vitamin C makes everything better. Or something like that…