Anyone trip with an extra boat?

Has anyone on the list towed a smallish kayak just for tents etc??? I imagine that if it was filled up and then plastic covered the coaming it would be really waterproof. Would it be worth the effort?

Would that be a reasonable alternative to a pack canoe to ease cargo limits?

I canoe, so I’ve always had sufficient cargo space. However, on at least 2 occasions I’ve seen paddlers towing an inflatable raft laden with overnight gear.

The inflatable would mean ultimate buoyancy and easy transport to the water. I just wonder if it might pop or how it would tow. Kayaks are fast. Towing is a drag… (pun intended

I’ve seen rec kayakers towing another boat, usually carrying a cooler full of beer but I’ve seen them carrying camping gear too. I’ve never seen experienced kayakers towing anything at all. A towed boat tends to behave badly on the end of the tow line, taking off on a tangent every chance it gets and multiplying the drag factor in the process, so you’d need to keep the tow line very short. Even so, you will find that towing requires a lot more paddling effort than what would be needed if the all the gear were stashed in one boat that’s suitable for such a load.

A pack canoe isn’t your only option, and keep in mind that “true” pack canoes tend to be made by quality builders and thus they are expensive when acquired new. How big is the kayak that you have right now? A bigger kayak in the touring category might do the trick.

Terrible idea in current. Bad idea even on flat water. You will greatly increase windage and skin friction just to avoid sinking your canoe a little deeper in the water. There are plenty of solo canoes that will carry more gear than you will need or want to carry.

I don’t think that towing any other type of water craft(raft, kayak, or canoe) behind your primary boat is a bad idea; one I would never even consider doing.

Towing a boat of any sort behind you is always going to be a “real drag” literally. Winds. currents, and obstacles(including other boaters), will create issues you don’t want to deal with.

Think about how much fun it will be if your towed boat hangs up on an obstacle, and dumps. It may then cause you to dump your primary boat too. A real safety issue, and a giant hassle.

Delete the second word (don’t), in first sentence of my first post.
Should have done preview…

Think of towing another car behind your car with gear because it doesn’t fit. Even that is no comparison.

Yes. Of course there are safety considerations due to having a boat on tow, such as slower speed and you should stick to calmer conditions than you may when not towing.

Along with towing to carry extra gear, I have also seen people use the towing to bring a different boat out. So paddle your long boat towing a play boat or surf boat, and when you get to your destination, leave the long boat on shore and use the play boat.

Last year, in Alaska, we towed extra boats because we had so much gear. We were up on the northern tip of Kodiak Island for 2 weeks cleaning beaches, so we need stacks of garbage bags and heavy duty work clothes. Plus we were base camping (9-10 days at one camp site), so brought large tents and even a portable wood stove for comfort. The guy who put the trip together was an NDK dealer in his past life, so we had a fleet of NDK boats (and some Valley boats). Even with some in the group in large doubles and having a pair of Sea Wind canoes, we still towed 2-3 singles with gear. 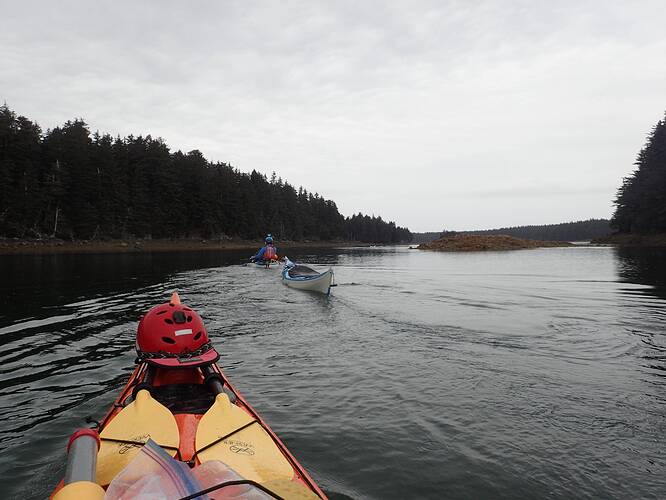 How long are you going out for and what are you taking along? One week for me in a 17’ high volume kayak is pretty easy. I’m pretty sure I could fit another week of food in there, and that’s the only thing that increases.

One club paddler did that. She regretted the tow shortly after leaving the launch and when the winds kicked up the second day.

Just to add to something that Pete said above, I wonder what your frame of reference is regarding canoes (hey, and I’m not using that term in a physics context, for once). I ask that because though a pack canoe would work, I’m not sure that I can infer a reason that you’d need a pack canoe instead of an ordinary solo canoe. General-purpose solo canoes are much easier to find than pack canoes, and many are reasonably cheap, and all can be propelled with a double-blade paddle, if that’s your concern (and that’s often the concern for someone new to solo canoeing).

At the put-in below Hover Dam, the security freaks give you 15 minutes to unload the shuttle, get your gear down to the water, load your boat and get away!
Or else!
If you are doing a day-trip hauling a smaller boat and a single backpack of water and lunch, it is doable.
For we who do multi=-day trips, it is impossible!!!
HS makes us load bags of gear ON THE DECK and paddle 500’ down river to a rock bar to repack.
It is dangerous and I really doubt that even one of those paranoid cops would do anything to save an overturned paddler.

When we complain, the guys-with-badges-on-their-dicks reply, “then don’t paddle the river!”.

I usually trip with acid

Towing anything requires practice and towing something with a sharp bow that can impale you in the back is really dangerous. If the seas come up in the stern your towed thing can overtake you and hit you or if it overturns pull you over too. When I was training for a Maine Guide license we had a workshop in March in highish seas on the ocean. Even a two foot wave was an issue if coming from the stern. Its imperative you have a quick release mechanism within easy reach. We were taught to tow with tow belts with that release. Attaching to you rather than your boat makes more predictable control possible but the tug as you accelerate and the towed thing is still relatively at rest( and this happens each paddle stroke) is at best annoying. For this reason to minimize the tug towlines incorporate an elasticized component.

Yep its possible and I have towed canoes with a kayak for island cleanups. Its no fun…
Stacking high on a deck really is a wind issue and also makes your craft more unstable
You can get a lot of stuff in even a fast solo canoe. But at about 400 lbs total for the usual solo your performance suffers.
I do stuff that much on 10 day trips in the Everglades cause of all that dang fresh water that I carry. The boat is like a log at the beginning.

Of course the other approach is to pare down your stuff if you can. Stuff in the cockpit covered with a coaming may not be as waterproof as you like. Twould work on a calm day… You have to figure out how when Murphy calls you will eject his butt… ergo preplan for the worst.