I’m sadly suprised this doesnt happen more often with Crew teams. When I lived in minneapolis we’d launch on the mississippi river just up stream of the UMN crew house. They were as hard core as the racing group I paddled with and practiced from ice-out to ice-in, just like us.

In the spring it always struck me as an ‘accident waiting to happen’ when they would send out two 8 man boats (18 people in sculls) with 1 support boat (a small center console zodiac). In the spring the current was often very strong (2-4mph), wind was blowing, eddies and such…the crew was in nothing but shorts and a t-shirt in 38* water, no PFD’s to be seen, just like this crew. I always thought to myself if a boat flips people are going to die. Looks like Iowa unfortunately lived this scenario.

If I ever have a kid on Crew, I’m making sure their coach takes cold water seriously. From what I have seen, Crew teams have made very poor/sketchy/unsafe/no backup plan safety decisions, which really suprises me in our Safety before everything lawyer driven culture.

Anyways, this one struck home for me because of its close proximity to MN and the non-safety culture of crew teams (at least according to what I have observed). I feel they have no excuse as they employ professional or semi professional coaches who should know better and an athletic department in charge of student safety. Wtf were they thinking… (the university or coach, not the athletes. They’re just going along with the program)

Anyways, as tempting as it is to get out early season, do it wisely. Dress for immersion. Wear a PDF. Check the forecast. Paddle in conditions well within your abilities. Stay close to shore. Pack a drybag with items to warm you up. etc. etc.

This is a very sad incident but like you I am not surprised that something like this happened eventually. I rowed for years (mostly non competitively) and saw little to no consideration of cold water safety (this was in Boston). I kept a recreational shell (Alden Ocean Shell) at the BU boathouse when I was in college and did carry a pfd in the boat but nearly all rowers in racing shells do not. I did have the crew coach strongly suggest that I not go out early in spring unless one of the coaching launches was also out so that they could help if I got in trouble. I admit to being fairly unaware of the dangers of cold water then (20+ years ago now) but as time has gone on I have realized some of the risks that the flatwater racing crowd take in the name of “speed” These boats have very little flotation and nowhere to store the necessary pfds (they are usually in the launch).

What a tragedy…my experience was the same as yours rowing in college…I never once heard anyone even mention the risk of frigid water…Im sure the launch didn’t have a lifesaver or rope to toss. I see that US Rowing is raising awareness and starting to publish useful info but clearly its not being heard by many of the teams (https://rowsafeusa.org) I need to get one of those minimalist pfd’s that wont interfere with the rowing motion.

We never wore anything while rowing with a thought of immersion. On the water as soon as the ice was gone and off when ice started to show up. Only consideration was keeping some semblance of dry from rain/snow/splashing, but that was only practice. Races were unisuits and nothing else. Pfd’s? Ha.

To be fair, it takes a massive amount of effort and stupidity to roll a crew shell, particularly an 8 man. In my four years of rowing competitively, I never saw nor heard of a shell rolling over.

It is uncommon to hear of a four or an eight flipping. Swamping maybe, but not a full capsize.

Granted it has been a while, but I rowed competitively for almost 10 years, and in that time I can never remember ever hearing about a group flipping a 4+ (which apparently they were in because the news article stated 5 crew team members were involved). As has been pointed out swampings aren’t unheard of, but still rare. Singles and doubles flip all the time. Racing shells are exempted from having PFDs aboard by 33 CFR 175.15. This is definitely a tragedy, and I’m thinking it was a case of spring fever after a long winter off of the water. I rowed in upstate NY, and we would hit the lake as soon as it was open. If those wind reports were anywhere near accurate, I can’t imagine going out on the water unless the lake was extremely sheltered.

I don’t why a Type V PFD is not required. Minimally restrictive and with a small profile. Like the Potomac just below Great Falls, a PFD is required to be worn when he water temperature is below a certain value.

I’ve always been amused by the chase or “safety” boats used for crew. In this area generally two vastly overweight men in a tiny outboard. It’s unlikely they could get even one rower aboard without capsizing.

Several years ago a George Washington University crew coach in a chase boat lost his balance and fell overboard head first into cold water with the PFD in the boat. Classic disappearing swimmer event. Never resurfaced. His body was recovered several days later.

Have you ever rowed competitive crew? Any pfd would have a significant impact. Not saying it is right, but it is what it is.

There are also shells designed for rough water. I’ve rowed a flat water boat on ocean inlets (head of the mystic) and it is sketchy as anything, but still never came even remotely close to a capsize.

Good reminder about cold water in early Spring. I used to paddle often on a stretch of water used by University of Michigan sculls…actually had two collisions over the years where a 4-person scull zigzagged at me at high speed and I had to deflect their oars with my paddle. Made me a little grumpy. One time a woman in a single fell out in an area full of plants and although she was embarrassed and didn’t want help I stayed close by until I was sure she was safe. Another time two coaches in a chase boat took off from a stop and threw a good 3 foot wave just as I passed 10-15 feet away in my canoe. That made me grumpy too. Based on my limited experience I’m not surprised by a college scull accident.

This was taken April 27 2017 I was wearing my drysuit. I think the air temp was about 45 F that day and the water was around 38 i think. They do have light jackets on but no pfd. 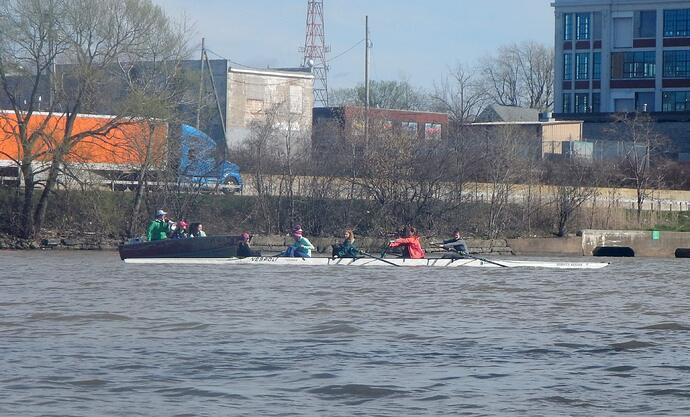