Are we able to cook on a sit inside kayak

You can always tow this along I guess. 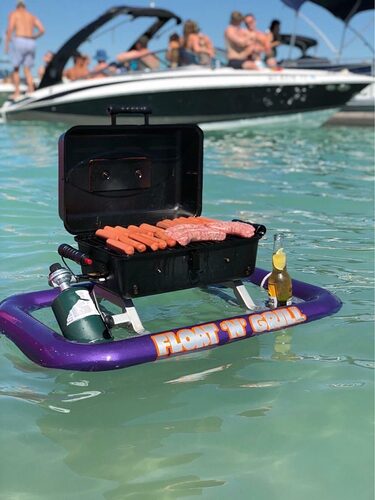 Look at all those happy, non-pfd wearing people just waiting for their hot dogs.

The real question here is “why would you want to cook in your kayak?” Can’t you just go to shore and cook there? It seems that the risks of fire and/or scalding are too great to be worth it. It’s bordering on qualifying for a Darwin Award.

going to need a bigger boat

All of my cooking stoves on boats were gimballed. I can not envision a gimballed stove on a kayak in ocean waters.

I’ve seen enough videos and read enough horror stories of boat fires that this sounds like one of the most inane things anyone would do in a kayak.

Wave comes along, bungee cord holding stove slips off, hot pan and open fire fall in lap with resulting immediate third degree burns and sets boat on fire. Sure, somebody did it and lived to tell the tale and posted a video. Does that make it less of an idiotic idea?

Numbers vary some but generally a boat fire doubles in size every 7 seconds. On a typical fiberglass cruising boat you have about 1-3 minutes to get it under control before it is a loss. Meanwhile, the fire belches out toxic fumes at you. And somehow this is considered by some to be an acceptable risk, in a kayak no less, so you can cook food?

OK, I came back. Appears little response to the idea of cooking a bluefin tuna over a camp stove, let alone catching and gutting three to four foot of fish in a kayak. Or catching salmon which is most successful in a rather high current situation just under a water ladder or a falls up a river mouth. Where there are likely bears in the water with you.

I really cannot believe this post is serious. Unless someone really wants to try to catch a Great White, arriving to eat the bloody tuna entrails.

Yes I can cook on shore depending on where I am located and what the local laws are.

But I want to be able to cook in my kayak only in an emergency for example.

I can’t see the shore line

For an emergency, take food that does not need to be cooked and a VHF. If you do not need a VHF in that situation, it is not a real emergency.

Well there is this old chestnut - Two Eskimos sitting in a kayak were getting cold so they decided to light a fire in their boat. It promptly sank, proving once again that you can’t have your kayak and heat it too.

Jetboil is another stove like the MSR Reactor that does not have an open flame, both can heat a quart of water in about 3 minutes. If you just need hot water for a freeze-dried meal, that is a good option.

On trips, I tended to use the aforementioned ‘solar microwave’.

About an hour prior to lunch, I would pour water into a tupperware container with dehy(or freeze dried) food in it and put it on the front deck to ‘cook’.
Dinner was a little more difficult, as the sun was pretty low, but still worked.
(never did carry a stove, but most of my miles have been in warm climates) 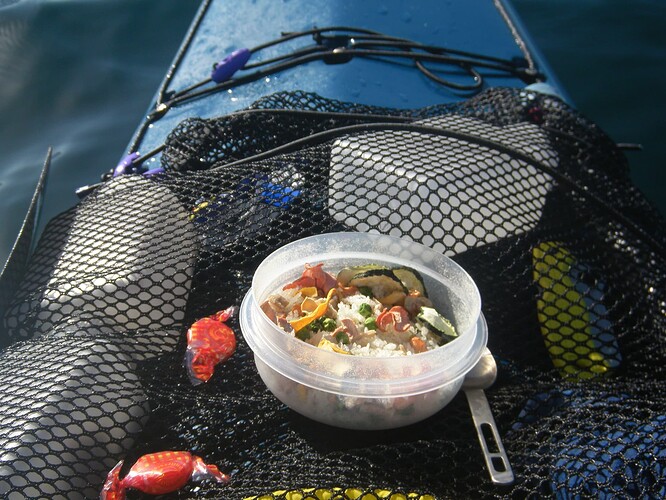 I thought he said bluefin tuna at first glance too, which I thought maybe was a joke, but he actually said bluefish. With “tuna” listed separately, but there are small species of tuna. Still not something you’d really want to attempt, but hey, I don’t know the backstory for the question. For all I know he’s writing a novel about someone’s miraculous survival while adrift at sea and wants to make sure the details are plausible.

I grew up catching bluefish in the Chesapeake. Great fight, especially in the 8 to 12 lb range, but I would have to be real hungry to eat one. My favorite recipe is cedar plank Bluefish

Make a mixture of apples, and Pepperidge Farm Cube Stuffing, al little white wine to mix it.
Salt and pepper to taste
Place on blue fillet skin down on a cedar plank
Put the stuffing mixture on top
Add another blue fillet on top skin up
Bake in a 300 degree oven on in a closed grille on indirect heat for about 30-45 minutes
Remove from oven
Discard the fish and eat the board
Bon Apetite! Its an old Maryland favorite

A good rule of thumb when on any trip…don’t bet your eating on being able to catch fish on any given day.

You would want to cut away from you cleaning a fish, but I would wear a Kevlar glove that covered the wrist of the the hand not holding the knife if trying to clean a fish on the deck of my sea kayak! Don’t want to become crab bait.

There have been a few instances of kayaks being test bitten by great white sharks close to shore in Catalina island, I remember at least one of these was a kayak fisherman who had cleaned his catch from his SOT.

About six years ago there was some commotion near the boat ramp at Lajolla Shores, with people claiming there were hammerhead sharks following boats to shore. I didn’t believe it since I had never even heard of a hammerhead near here, but it turns out some fishermen were cleaning their fish and dragging them in on a stringer, and they did indeed manage to attract hammerheads. After the sharks learned that kayaks carry nice fish on a stringer they started patrolling for other kayaks with fish. A few days later a hammerhead checked me out while surfing in Lajolla Cove. Here are some kayak fishermen getting checked out… 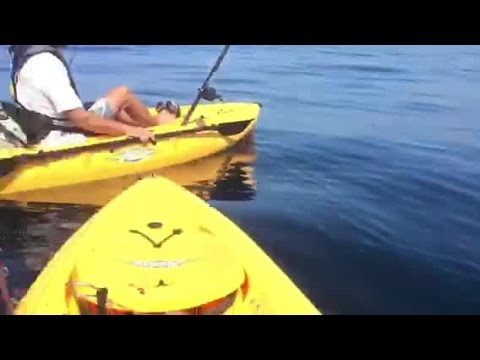 Deep Trouble had one story of a guy who had the back end of his kayak bitten by a Great White in Cape Cod, fairly near shore because he and his friend paddled like hell and landed on a beach as his boat went into sinking mode. Bite marks were undeniably a good sized White.

A ranger came along and started trying to fine them for landing on protected federal shoreline. Until she saw the kayak.

My recall is that they were not doing anything involving fish, but it has been a while so I may be forgetting some part of the story.

Lobster in your lap in a kayak. That sounds like an interesting time…

Where there’s a will there’s a way! This guy has even color coordinated his grill and kayak, now that’s commitment! 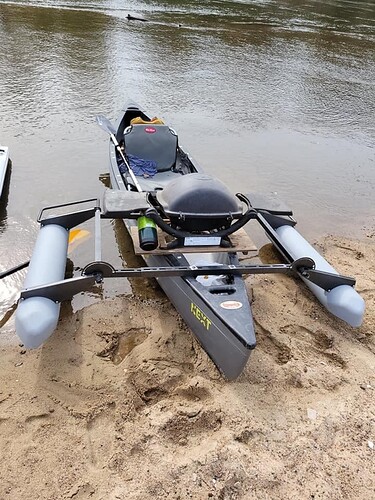