Are you underestimating hypothermia risks? I have been.

I was considering kayaking on my local lake a few days ago. Now I’m researching the purchase of a wetsuit. Temperatures have been in the 40s F with water temperature about the same. A doctor friend basically said, “what if you fall in.” Since I only go with very light winds and don’t fish I thought the “chance” of falling in was very slim. That’s probably not a wise perspective. Although I’m generally less than 100 yards from shore, on nicer days I like to paddle across the lake ( about 6/10 of a mile each way) and around a small island.
Since this lake is only above 60 deg F May through mid-October, I’m thinking of limiting myself to those months and getting a 3 mm wetsuit with boots but no gloves or hood. 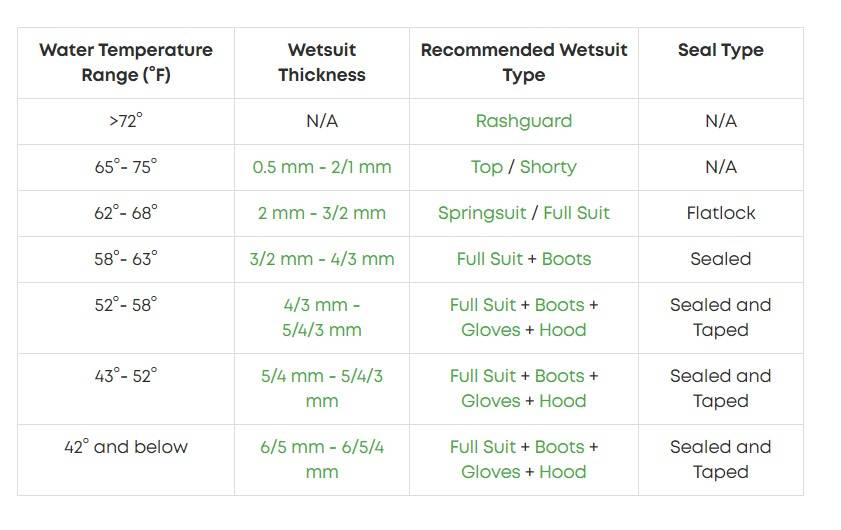 Good for you for considering thermal protection. Very important. Lack of protection is often an important factor in the paddler deaths which get posted on this message board.

The Evo wetsuit guide you posted is actually meant for those who are immersed more in water, like surfers. Kayakers may downplay the thickness a little from what they recommend, and are more likely to just use something that just covers their legs and core (like a farmer john style wet suit). Or, as the second chart shows, in very cold or if further from shore, may switch up to dry suits.

The second chart talks about paddle jackets. That is because wet suits do a poor job of keeping you warm when they are wet (which could be from sweat - doesn’t necessarily mean from a swim). You don’t necessarily need a paddle jacket, but having some sort of wind protection like a wind breaker could be important.

I’ve been thinking about this wetsuit, ( Seavenger Odyssey 3mm Neoprene Wetsuit with Stretch Panels) and it could also be useful for snorkeling. My only concern would be flexibility in paddling. Wetsuit boots would help during the wade to get on the kayak. I’ve thought about throwing my swim fins in as a safety device but to do that I’d really need to leave my little fold-up kayak cart on shore ( it rides behind me during paddling sessions ) 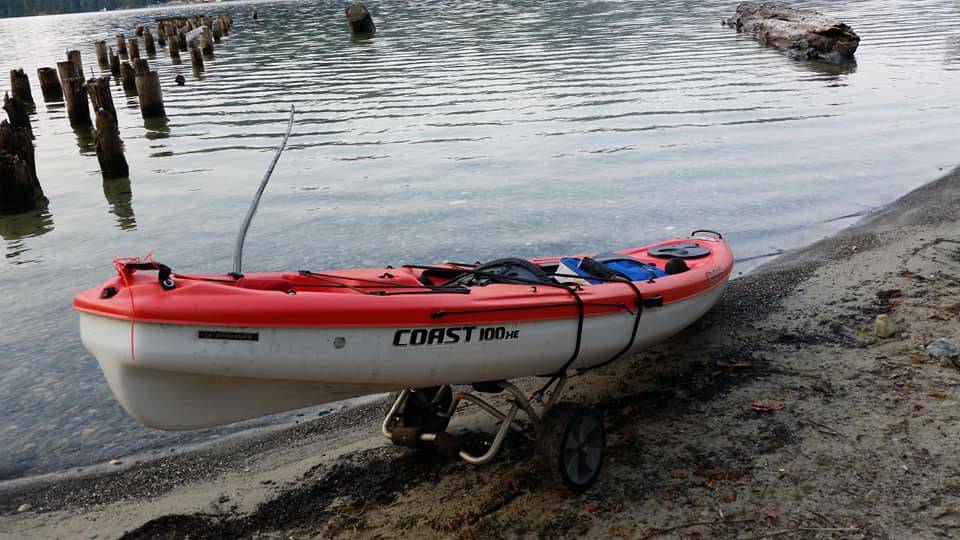 Hypothermia isn’t your only concern…

@carvinae185@gmail.com said:
I’ve thought about throwing my swim fins in as a safety device but to do that I’d really need to leave my little fold-up kayak cart on shore ( it rides behind me during paddling sessions )

I think a better safety device is learning how to self-rescue (get back into your boat). The quicker you can do it, the less time you spend in the water. If you paddle a SOT, it will be easier to do and something enjoyable to practice on a hot sunny day.

You’re on the right track, no doubt. But continue to dig deeper and learn more before you take action. You know just enough to be dangerous to yourself at this point.

I’m probably more guilty of underestimating my chances of getting wet than anything else. I do wear a wetsuit in the cold months, but I’ve never needed it, except to keep warm out of the water. My plan is always to stay dry and that has worked for more years than I can remember, except for a couple of times when I got sloppy getting in, or out of the boat. I doubled up on not being sloppy.

I’ve been wet many more times while sailing, or canoeing than I ever have while kayaking.

I think you ought to at least bring a hood with you IF you go when water and/or air is cold. Put it on when things get rough.

The hood will make you warmer overall, not just on the head. It also protects you more from cold shock during an unexpected capsize. Necks are very sensitive to cold wind or water.

You should stand in shallow water by the shore and stick your head and neck under water to see what it feels like. And then factor in that that is an EXPECTED dunking.

Follow Rookie’s suggestion no matter what clothing you wear. If you limit your trips to days when the water is at least 60 degrees, wear the 3mm wetsuit, and practice self-rescue skills, that’s a good start.

I have the philosophy that the only safety which works is the one you have practiced. (With a few exceptions of course).

So it is good that you think of what you would do if you get into the water. But it is even better to practice it - with a good backup plan so the practice doesn’t turn into a real case.

So when you have bought your wetsuit, test out if you will actually be able to swim the distance needed in the water temperatures you expect, with your kayak on tow. Remember the part about the backup plan - probably better to swim along shore with someone ready to rescue you.

It is very likely that you will discover that you will not be able to swim the distance you would need to rescue yourself from a capsize at the middle of the lake. In which case you need to change your rescue plan and practice that plan instead. The self-rescue mentioned by Rookie would be a good idea - even if you find out that you can swim the distance.

Hadn’t seen that video before. Contains some good stuff. Thanks for the link.

Carvinae185, it can be pretty individual. I tried going into winter in some healthy layers of wet wear and found it wasn’t enough for me, at least when I was wet. But I easily handled winter water temps with the right layers under a dry suit. You have to find what works for you.

For the occasional/casual lake kayer like me, dry suits are too expensive. I’ll just skip the months where a modest wetsuit is inadequate.

@carvinae185@gmail.com said:
For the occasional/casual lake kayer like me, dry suits are too expensive. I’ll just skip the months where a modest wetsuit is inadequate.

I think a sealed seam 3/2 plus a splashtop can cover above 50 watertemp (if you are cautious about your distance from shore, or good with self-rescue) and windchill pretty well.

For ME if the water is below 55 F I use a drysuit . For me my hands and the ability to use them to any degree goes first.

I found a nice middle ground that has worked quite well for several years. I found a closeout on a semi drysuit for around $280 and have paired it with a very light, racing style of wetsuit underneath. Depending on conditions, I may use fleece or wool instead of the wetsuit. Not only was this a pretty inexpensive way to deal with the cold, but it’s pretty comfortable and offers a little more protection against any seepage. Also, when it warms up, I shed the semi drysuit and have a perfectly good wetsuit to use. I highly recommend unless you are in a boat that flips you upside down if you capsize, spend a lot of time in surf zones or plan on doing some pretty extreme open water stuff without a net.

Winter is a wonderful time of the year to be out kayaking. No doubt special attention to detail must be followed when it comes to clothing/gear being used - albeit a dry suit or tuilik, but if you happen to be in a sea/touring kayak specifically, it is just as important to have a good steady bomb proof roll in one’s skills set in order to minimalize exposer to frigid temps should capsize occur.

Take a look at this awesome historic video clip of some old Inuits, and members of the 1930 British Arctic Air Route Expedition practicing their sculling & rolls. Learning to roll [Watkins Last Expedition by F. Spencer Chapman 1934 Penguin Books] was paramount before even thinking about venturing out in such harsh conditions -

Great video - kind of long to sit through, but I watched most of parts one and two.

I don’t have a roll, so when I swim my head usually stays out of the water. There is always a lot of talk about the gasp reflex, but I have never heard of anyone actually experiencing it (fortunately). I have had number of friends experience the vertigo you get from cold water in the ears - they say that’s scary.

I always thought that incapacitation was result of hypothermia. Interesting that it can also be caused by the initial cold shock as well, and that you need to start to be concerned with water temp’s in the mid 70’s - yikes. Around here it takes a long time in the spring for the rivers to get to the mid 70’s. Does the ocean ever get that high?

I tested out my drysuit a couple of weeks ago with water temp’s in the low 40’s. My drysuit was fine, but I wear thin gloves with holes in the fingers so I can take pictures. It only took a couple of minutes for my hands to go numb and actually hurt. I couldn’t keep them in the water, and wouldn’t have been able to do anything that required dexterity. I didn’t put my head underwater - not that brave. 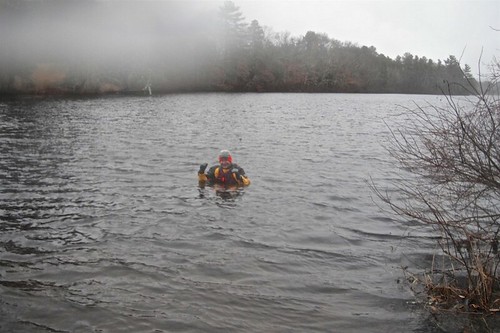 As I was watching the video I was thinking of the difference between sea kayaking and river/whitewater paddling (which is what I do). In river paddling the concern isn’t long swims, it is getting pinned, or recirculated in a hole, or flush drowning. It’s usually a short swim to shore, so if you are in the water a long time, you probably have more immediate problems than hypothermia. I guess it is the same with sea kayaking.

Erik - Moulton describes the “gasp reflex” a little differently than I’ve seen it here in the past. Not just an initial involuntary inhaling - but a reflexive ineffective shallow and rapid breathing on inflated lungs (I forget his actual words), that inhibits deep and rhythmic breathing necessary for efficient swimming. I will be the first to say that I have had exactly that experience in a swim I took in 50°f-ish water on a 100°f day, without the benefit of the drysuit (never again).

People obviously react differently. I was tossed out of a canoe into 41 degree water on a 70 degree day.
I had time to realize what was happening and held my breath as I went in. I went under for a couple of seconds until my PFD popped me to the surface. It was a shock but I swam to the shore and climbed some roots to get out of the river. No respiratory distress that I could tell.