Just picked up an older Impex Montauk. As it was missing its 3 hatch covers, I purchased Sea-Lect replacement covers. They fit nicely… (although I didn’t know until yesterday that these hatches require a push down and then a second step of setting the ring all the way around the hatch…)

I’m working on a retention strategy for these covers. They each have a small two hole tab on the rim (outside) and a single small tab with a hole on the underside.

It looks like the day hatch had been retained with a length of bungee attached by p-clamps. Inside the p-clamp was mounted to the underside of a deck fitting bolt. The other end had a nut/bolt, p-clamp and washer that looked like it had been attached to the hatch, perhaps with a hole through the middle of the hatch.

I’m thinking that I can mount p-clamps in the front and rear bulkheads the same way and fasten deck line (rather than bungee) to the tab on the bottom of each hatch. No extra lines above deck. I’d like to be able to connect/disconnect the line from the hatch for storage or travel, so I’m thinking about a small ring to go through the hole in the underside tab (it’s quite small) and then a clip on the end of the line to attach it to the boat…

Others have talked about gluing mounts inside the hatch, not sure why the idea of the p-clamp hasn’t come up before…

Thoughts on this approach?

On my Assateague they’re just clipped to the (external) deck/perimeter lines. The day hatch was connected inside as you’ve described.

@Sparky961 said:
On my Assateague they’re just clipped to the (external) deck/perimeter lines. The day hatch was connected inside as you’ve described.

That’s weird, why not do all three the same way?

Many day hatch covers don’t have the external tab to tie off, but have the internal ones. Without external tab, tying it off inside is easier. Many actually don’t add a P-clamp, but instead just tie off to the skeg slider tubing. Don;t pull too hard or it could damage the skeg.

@lml999 said:
Others have talked about gluing mounts inside the hatch, not sure why the idea of the p-clamp hasn’t come up before…

Perhaps because the nuts for the deck fittings aren’t always accessible from the inside.

I have Sea-lect hatch covers on my '84 Nordkapp and used a small loop of bungie cord to connect the exterior tab to my deck line. I left a few inches so I could lay the covers on deck when I was accessing the hatch. Fed the bungie through the deck line then through the tab then knotted each end so it’s easy to remove a knot should I wish to store the hatch cover elsewhere. Don’t know if you can get any easier than that. 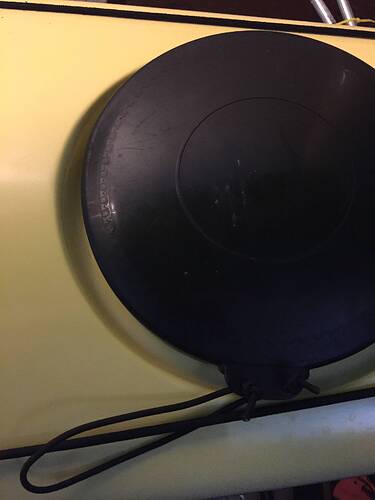