Lakes can be so deceiving. Solo I get out before grinding on shore… I think I can get out and stand on a rock cause it looks so close… More than once I have wound up swimming… the rock is six feet down

Lake paddling is not always innocuous and I realize we have people here with only river experience who have trouble visualizing this.

But on the river sometimes wave trains have hidden pyramids. We were on a run in Wabakimi enjoying the wave train and bam… hit the embedded rock spike. Yard sale… We were only a day out of the base but had a whole roll of duct tape. Which we used. The canoe was not leaking but we did not trust it hence it got lots of duct tape. I tore an aluminum thwart out with my leg while being ejected and the canoe gunwales were shot but we continued on another 11 days .

glaciers are notorious for littering

Oh yes, lakes can be very deceiving. I’ve run into rocks on Sturgeon Bay of Lake Michigan. They either looked deeper than they actually were or I just didn’t see them, even with polarized glasses. Maybe that won’t be the case this year since the lake is 36" above its normal April average.

The stepping stone I mentioned that I thought I was getting out on was on a lake up north, but I had a friend do the same on a pond in Connecticut. We ended up having to dive for the camp stove on that one. Clear water can be tricky. Those scraped-clean shores north of the litter left by terminal moraines are the worst. Often there’s really no gradual place to land - you have to get out on a rock a couple feet above the water and if there’s no stepping stone, or something like one, or a log - something - it can be awkward. Especially if there are waves as well. I’d think it would be worse from a kayak than a canoe, also. Hat’s off to those who can do it with precision and grace.

Glacial silt is great for sanding off pond scum? And it smoothes out the scratches from rocks!

Speaking of rocks. You bet we stole his kayak and left him standing there. 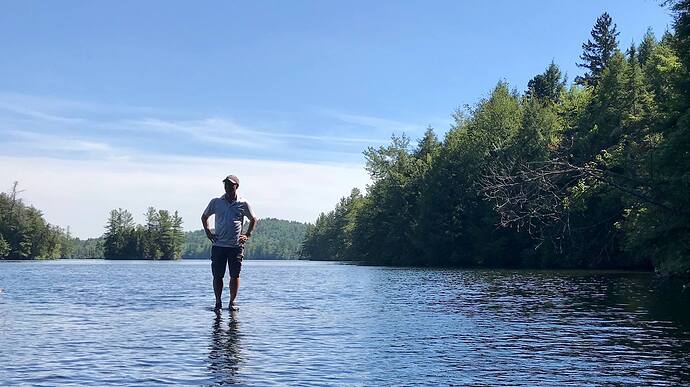 Great photo. So is there a log or something just under the surface that he walked out there on? It looks like there may be a little line going back toward shore where the ripples are slightly different…
Willard Pond?

I like just a little water to go with my rocks. I’ve followed a few canoe trails- blazed yellow, red, or green depending on the color of the abs canoe. Even aluminum canoes and plastic poly can leave its mark.

Tannins, mud, and glacial silt can change visibilty and cause one to “peg” hidden rocks and stumps. While mountain streams may look too shallow due to their clarity they are often floatable. Once, when speeding down a mountain stream in idaho my bow paddler complained “I’m getting dizzy.” “Stop staring down at the riverbed” I shouted…and magically the dizziness went away. If seasickness was only as easy to cure.

We held his kayak in place as he got out of his kayak onto the giant boulder. Then we took off with it. He’d have had to swim to shore as it’s quite deep there.

It’s Grafton Pond. If you’re local? Hit it during blueberry season. The islands are covered in blueberry bushes and mostly inaccessible to the local deer & bears (unless they want to swim to them).

Well, it speaks well of you that a friend would put himself in that situation and trust that you’ll return his boat. lol
Not local. I’m in Wisconsin. I spent a season (in 1969) doing landscaping work, scraping barnacles and painting a yacht hull, and generally poking around in Connecticut. Explored and camped few ponds back then and they were nice. I haven’t, alas, been back to the northeast since the mid-70s. Love Acadia.

There are SO MANY nice lakes/ponds w/in an hours drive of our home in SW NH!

Grafton is probably my favorite after Lake Umbagog (much farther north & east on the Maine line). Willard Pond is less than 20-25 minutes–no camps. It’s all conservation land. I love it even if it is small. The other awesome one nearby is Nubanusit lake that connects with a very short portage (50’) to Spoonwood. Motorized vehicles are allowed on Nubanusit, and the western side is built up. The boat launch can be quite busy. The east side? Not as much. Spoonwood is 100% pristine and no motorized boats.

If that is a rock attack zone, forget about running rapids.

I wasn’t in a boat that’s suited for rocks. Or, rapids. :