You think I’d remember it’s an attack rock zone. You would be wrong.

We call those Jesus Rocks.
Cause when you hit them ( and you never can see them) you say OH JESUS… or some variant.

Just get out and line your boats. When there is little current there are few problems.

You would not willingly get out of a boat to line up through rocks you can’t see. Northern waters are tannin stained and rocks just below the surface are invisible. Sometimes visible too late to avoid in just the right sun angle

Ouch, I feel your pain. Sure glad I took out the plastic Capella today instead of the carbon/kevlar Explorer. Oysters and shell banks make similar sounds on any composite kayak.

You can line boats from shore.

Agree, but will also add that polarized sunglasses can help a lot here. I know when I don’t have mine on because I’m left wondering why I can’t see anything below the waterline.

Not in the rain LOL! We often encountered unseen rocks when scouting for historic and not used for a hundred years portages in Wabakimi… We were looking for tree blazes on shore in the woods sometimes made by the voyageurs. Paying attention to trying to think like a portage , peering at the GPS to find the narrow part between two lakes and the driest topography. I spent 8 years hitting unseen rocks working on opening old ports in Wabakimi.

Rec paddling is not quite so distracting. Then you can pay attention to subtle wave discrepancies that sometimes herald unseen lunkers.

It was roughly hip deep at that point and 45F°.

If my glasses were polarized I’d have them on! Next time I get the 'script updated it’s on my list of features.

Quriser says to the club , "Follow the guy in the wood boat . He won’t hit any rocks!. "

I prove her wrong a lot.

Or just follow someone at a discreet distance and if they suddenly disappear and crunching sounds or swearing is heard, take a different line…

But seriously, when you mentioned “remembering” those attack rocks I figured you’d paddled through there before and knew there weren’t any monsters laying in wait for you on that stretch. I don’t know about others here, but the “attack rocks” that are apt to get me are the ones a few inches under in relatively still water… the ones that don’t, or hardly, raise a ripple. When approaching a little drop I’ll be looking for my route fifty feet ahead and fail to notice the rock three feet ahead - or I’ll come through some little chute and think it’s done only to bump something hiding in the ripples at the bottom, or even in the eddy I was hoping to catch at the end. I doubt that experience is unique to me.

Your post reminds me of a paddle that some of us here were on that was suggested by WildernessWebb (Terry) - Big Creek near the St. Francis in the Ozarks. TheBob and I were paddling through a pool next to each other in the lead and we came upon some rocks sticking up - like teeth in the water. Just the kind of place that one would expect there might be “attack rocks” around. We chuckled and remarked that it looked like the start of Boyscout rapids - a pretty tricky set on the Wolf River in Wisconsin. But we thought we’d just paddle between the rocks and be done with it.
And it just got more and more complicated after - not big water and there were many paths through, but each path led to another set of complications, some of which led to dead ends, so to speak. We found ourselves paddling through what might be called a scree slope that had poured over into the creek. A “shut-in” was what Terry later told us it was called down there - and there were two of them.

All the solo boats got through, but the tandem paddlers all got wet before it was over… 45% casualty rate, we called it.
Here’s a shot of where it finally ended. That’s Bob pointing the way, Dougae and his dog Roxy coming through, and DuluthMoose and PuffinGin wading through in the background. Happy days. A trip and dear friends to remember - thanks to all those “attack rocks”. Wish we could all go back and do it again. 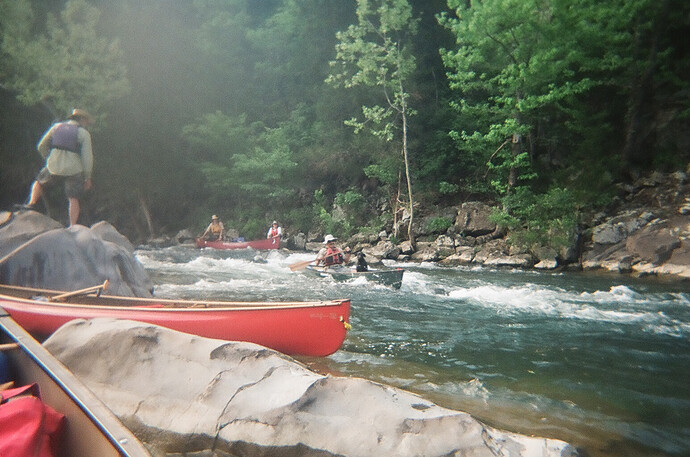 We’ve been to this spot only 1 or 2 times before a year or two ago. Rocks aren’t unusal here. Just about every body of water has rocks/boulders here, lakes & ponds moreso because of the glaciers that used to be here. Also, we only paddle flat, quiet waters so rocks don’t generally cause ripples are almost always invisible.

There’s a gorgeous gem near here called Willard Pond in Antrim NH. The water is crystal clear. You can, practically, see to the bottom of the water. The spooky part is you can also see the abundant rocks. But you have no idea how deep down they are—it could be inches or 10 feet below you. It’s nearly impossible to tell.

PJC that is a great pic! A bit more lively than what I like to paddle though.

Well, we had no idea that’s what we were in for either

I agree, clear water can sometimes be tricky, too. I remember once when landing glancing out and seeing a shallow stepping stone. I soon discovered, alas not by inspection, that it was actually about four feet under. It wasn’t a pretty landing. We’re all just between swims.

Difficulty is totally relative.
Rivers and streams have rocks. We can all agree.
PJC’s example might terrify some people.
River runners probably would not even stop to look at ii first.

We’re all just between swims.

True. While I haven’t swum, I have been flipped out onto my side while entering Paul’s boat. There is no video of that event. Fortunately!

I have a friend that used to run rapids. We are 180° on opposite ends of the spectrum for paddling preferences.

You’re right. We didn’t stop to look at it and it probably wouldn’t have changed a thing if we did… To the best of my knowledge no one was terrified either.
We did fall into the routine of the lead paddlers stopping to make sure the tail paddlers were getting through OK. One canoe got pinned in the first shut in and we Z-dragged it off the rocks. One of the tandem crews tried to line down from the bank - and tripped while clambering over a bunch of boulders with wild rose bushes in between. Lost hold of the painter doing so. The unmanned boat made it through just fine and there were plenty of hands to catch it at the bottom. No biggie. It was a fun day. Wouldn’t trade that little adventure for anything. We still laugh about it at camp fires at the 'vous. Two of us who were on that trip have since passed away. Can’t go back but the good times we had can never be taken away.