Back to Grand Teton NP - Jackson Lake this time

We’ll be headed back to GTNP in just over a week. We’ll give the eclipse watchers time to get home. Paddling on Jackson Lake for the first time. 4 nights in the Colter Bay area. Camping at Little Mackinaw Bay, and Hermitage Point. I’ve got my fingers crossed that the heinous skeeters that we encountered on Leigh Lake in early July are gone now. I planned this trip as an easy exploratory with short distances just to get a feel for Jackson Lake for future longer trip planning. 2 kayaks, 1 tandem canoe.

Just got back last night. Great trip and we were happy to be heading home as the holiday weekend crowd was arriving. We launched from Colter Bay and stayed at Little Mackinaw Bay camp on the first and last nights, and at Hermitage Point camp on the second & third nights. This was an exploratory trip to get an idea on the paddling at Jackson Lake, and I’ll definitely be going back there in the future. Paddling distances were short and we didn’t have any long open water crossing. I did learn that the wind & waves really pick up in the afternoon so paddling in the morning is key. We had one mid day paddle back to Hermitage Point camp from Signal Mountain area that involved some wind & waves. We all did fine, but it was a workout to negotiate our way back to camp. We had one tandem canoe, one 16 ft. sit inside kayak, and my 14 ft. SOT. There weren’t many power boats on the lake this time of year, and we were there mid week which helped in that regard. Weather was great. No rain, a little cloudy the first two days on & off, and spectacular the last two days. Night time temps were mid to upper 40s, daytime temps. in the mid 70s to low 80s. We were visited by a bear at the first camp. Large black bear near our toilet area. It was about 20 feet away from one of our group members as he was at the toilet. He heard a noise, looked around, and there it was. It didn’t seem the least bit interested in us, and ambled away down the lakeshore. We also had a nice otter show one evening. Two adults & three slightly smaller otters. We guessed maybe mom, dad, and the kids based on their behavior. The two larger otters had a fish and brought it on shore to eat it. They growled at the three smaller otters when they approached, so the youngsters frolicked in the water until they were allowed to join the feeding. Interesting to watch. Eagles, Osprey, Pelicans, Sandhill cranes, and beaver were also seen. We paddled all around the Willow Flats area, but saw no moose.

This was a good time of the year to paddle, and next year I’ll plan for a longer trip. Maybe a bigger loop trip starting & ending at Colter Bay with stops at Little Mackinaw Bay, Hermitage Point, South Landing or Spalding Bay, Deadman Point, Elk Island. 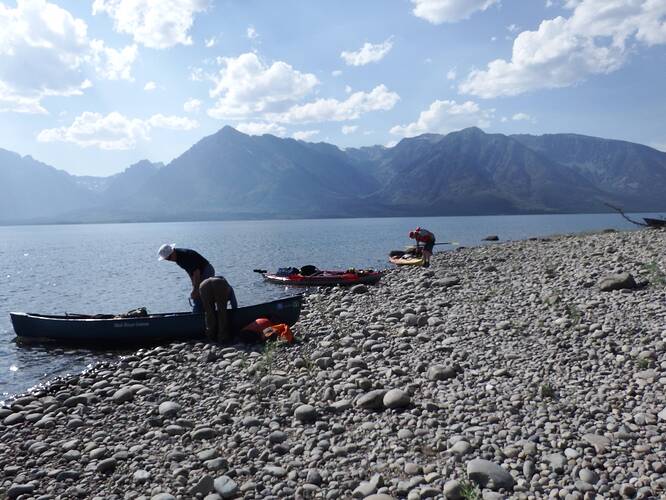 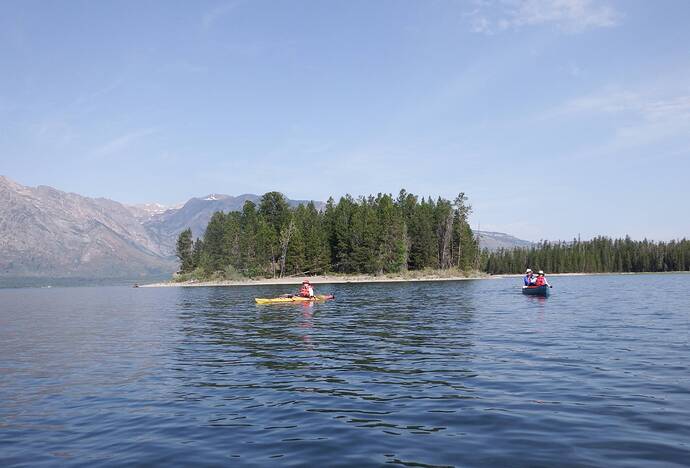 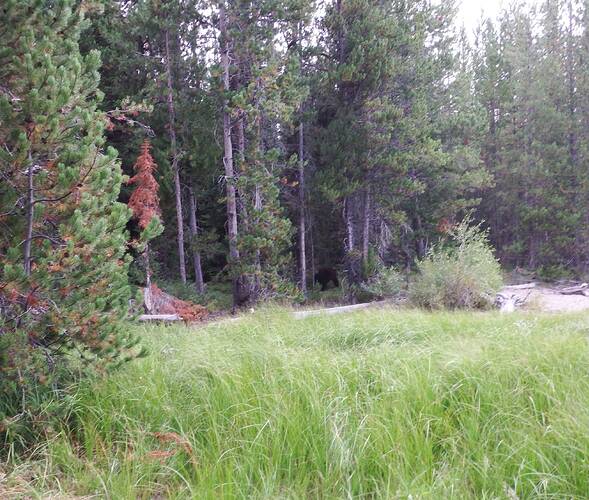 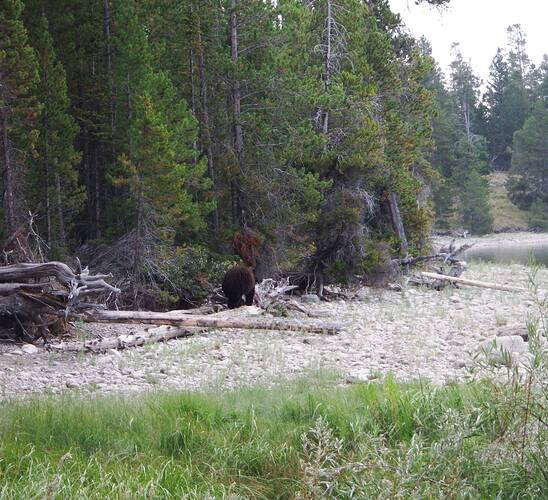 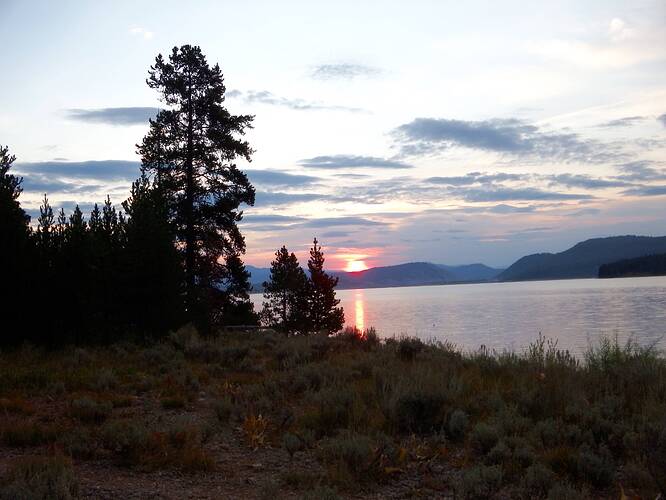 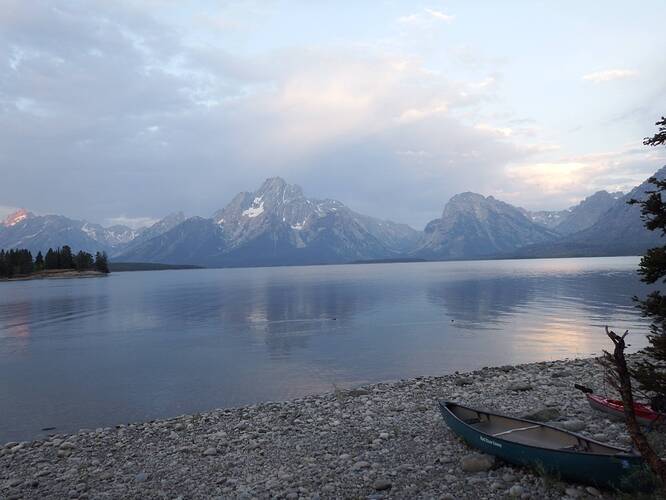 Sounds like biting bugs weren’t an issue. Beautiful area you paddled. Lived for a while in Colorado and northern New Mexico and miss the mountains.

Mosquitos were minimal this time, thank goodness. I definitely can see the danger of being far from shore when the wind and waves pick up. My Eddyline SOT handled small to medium waves without any problem, other than just being a workout to maintain my bearing & momentum. However, I’m sure glad I opted for a rudder on this kayak when I ordered it last year. That really helped a lot. Jackson Lake would be suitable to camp at the Colter Bay campground and do day paddles. We saw lots of rental canoes and kayaks out for short paddles. But I much prefer to leave the crowds behind and use the backcountry camps on the lake. There’s enough power boat activity and day paddlers not to feel like a true wilderness adventure, but that’s ok with the gorgeous scenery and occasional bear encounters. 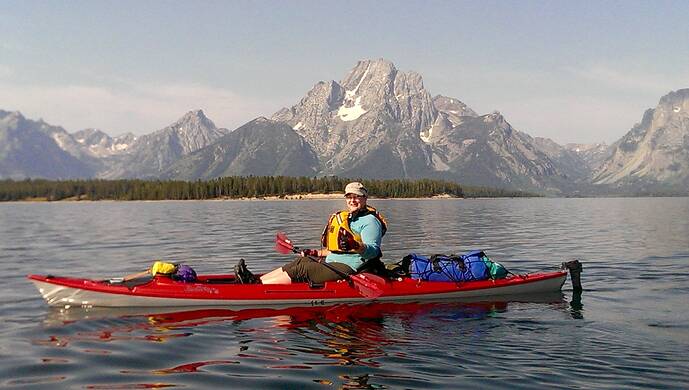