I recently bought a BV-500 but although it fits in my canoe, how the [bleep] do kayakers deal?
I mostly camp in non-bear areas so worry about raccoons, skunks and mice. On those times I camp in bear country, there is always a forest service bear vault handy, the ones made from steel and large enough to crawl into.

So you who paddle in bear country, do you use bear-vaults or the standard toss-a-rope-over-a-branch bear-bag system? 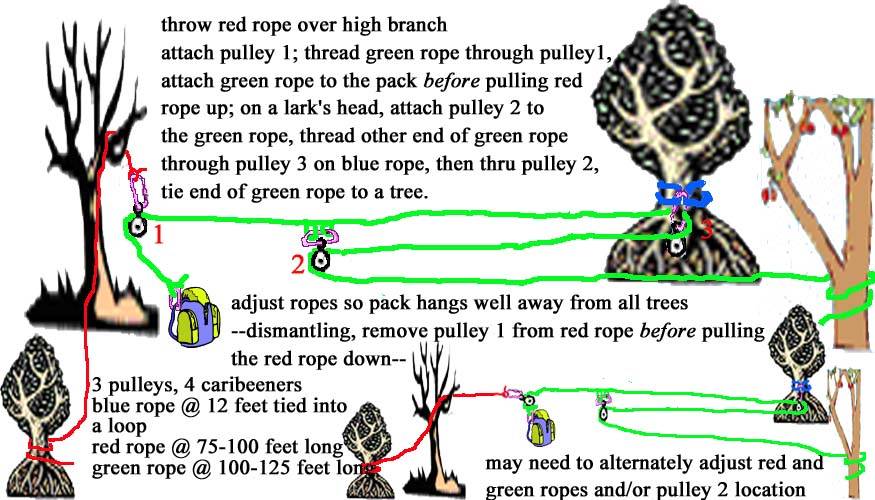 when I can’t hang, I use a Garcia canister …fits just under the rear hatch lid on my Nordkapp and the hatch has room to close too.

I should also mention clean hands before handling ropes and when not in use, store in a dedicated bag and not alongside any food.

My BV-500 fits in the back hatch of my Pygmy. It is a deep hull with a big hatch though.

Ursack with odor bag inside. No trees big enough in Georgian bay to hang from. Tie to tree.

I bought one and used it once for camping in the Apostle Islands. It just fits in the rear hatch of my Grand Illusion SK. I suppose I could fit another in front of my feet. I’ve mostly kayak camped on offshore barrier islands with no significant bear activity (to my knowledge) but am planning a multiday trip down the Altamaha (in Georgia) in another couple of months so may need to think about bear precautions some more.

Some ideas for thought.

(1) Camp on islands wherever possible, on the theory that although bears can swim, they “might” be less motivated to swim to an island than to investigate your camp on the mainland.

(2) Hang your food and don’t let others in a group do it for you. The only time I lost food to a bear was when someone else did the hanging. Use a hanging method and materials that also keep out rodents and raccoons.

(3) Be careful but not paranoid. The thought that “bears can smell food in a can” brings on thoughts like, “Oh no! There was a can in my hatch! Are they going to tear up my kayak to get to that smell?” Or “Oh shoot, these are the pants that had bubble gum in them last week.” I don’t think it’s possible to eliminate 100% of all odors. The only thing you can do is make it as hard as possible for bears to get your food and don’t go to sleep with hamburgers in your pockets.

(4) Don’t camp with people who don’t hang or canister their food. This one is controversial because some canoeists like to camp with large coolers, which attract bears and make it necessary to have something to fend them off (firecracker, gun, whatever). If it’s a gun, this brings up further issues.

(5) Don’t camp where others have camped. This is also controversial, because one line of thought is that all campers should be concentrated in one place to minimize the environmental impact. In the Adirondacks it’s downright terrifying to be at a group site where 75% of your fellow campers are not handling food safely and where the guy before you left hamburger grease on the table. These sites are magnets for habituated bears.

(6) Get a kayak with a large hatch and large hatch cover that can hold a bear canister. This might rule out some brands that have a low deck, like Eddyline.

Bears LOVE to swim… And islands are garden stepstones for them…They do like to rest… I avoid island campsites because the habits of those that have gone before me dictate the likelihood of another ursine visit. New campers almost universally go for islands as they feel safer…

Bring bear spray if you feel the need.

Hanging is not always feasible. The intent of hanging is to minimize injury to you should a bear become interested in your food. Dispersal is another way to accomplish this and in the Arctic about the only way save for an electric bear fence.