I’m purchasing an 2003 Bell Northstar that is Kevlar with gelcoat. What were the layups available at that time? I seem to remember White gold, Black gold and Kev crystal.
Any idea what this boat should weigh with wood trim. Thanks.

Did Bell have both black gold and Kev crystal available with gelcoat, and how would one tell the difference?

HI Rob. It’s already getting hard to find info on Bells. The link shows advertised weight for the lightweight Kevlar and black/gold (39/44). I think the Bell catalog said wood trim adds 3-5 pounds. Plus they fibbed about the weight. My black/gold Northstar with wood trim weighed about 50 pounds. They also offered color in the exterior gel coat as an option and that added another 1-2 pounds. A white gold boat with wood would most likely be 55-56 pounds. I think the lightweight Kevlar models were closer to their rated weight. I don’t know if they offered gel coat on lightweight Kevlar boats and I don’t know exactly when they stopped using gel coat on black gold boats. My 1999 Merlin II has a thick (glossy) gel coat but I have a newer Yellowstone solo that either has none or it’s much thinner. It’s not at all glossy.

The easiest way to tell if it’s a black/gold boat is to look at the thwarts. They are (dark) black walnut in black gold boats only…the decks are also walnut. In the other lay-ups the thwarts are ash like the gunnels. The interior color also shows the black/gold but you need to know what you are looking for since some of the other lay-ups look close in color. 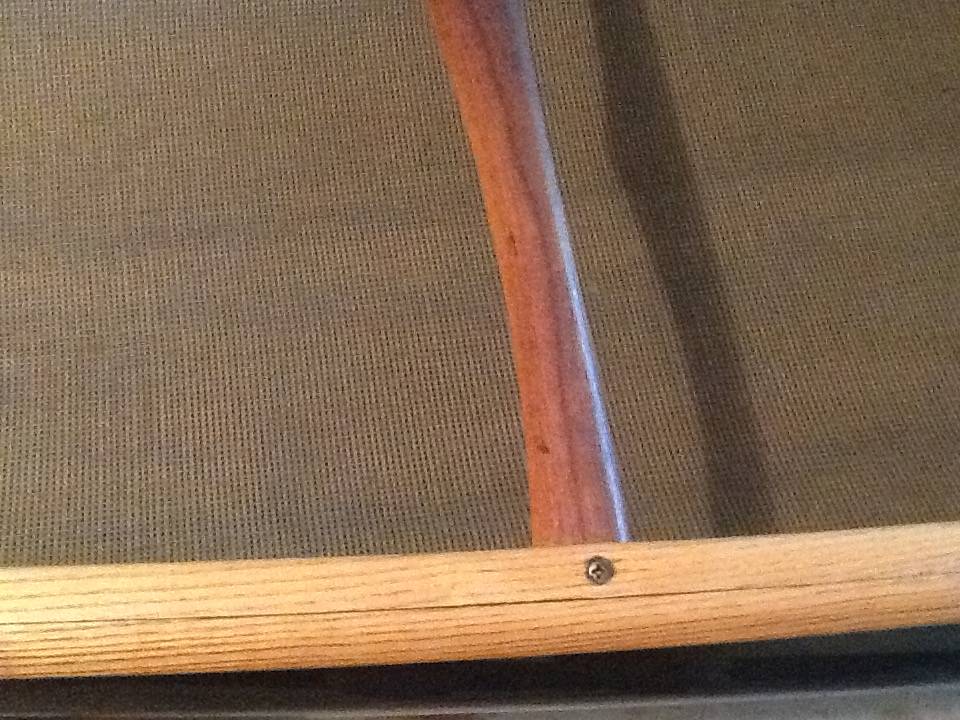 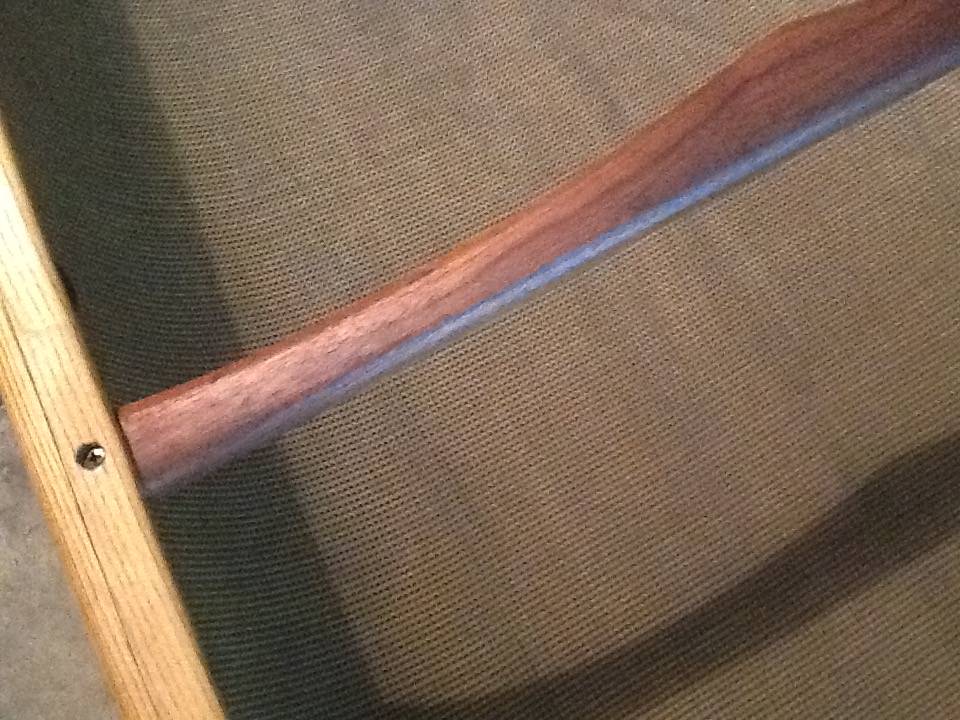 Thanks, guys, that is all very helpful. Its hard to tell about the thwarts from the picture I have, but will be no trouble to tell when I see it in person.

The center carrying yoke and kneeling thwart should also be black walnut in a black gold boat…unlike the ash parts in the catalog shot from Steve. If the wood is dry and bleached out you can just lick your finger and touch it and the walnut pops. I also just remembered that I had a black gold Northwind at one point and it just happened to be a 2003 and that boat (pic) had a nice thick clear gel coat. Good luck! 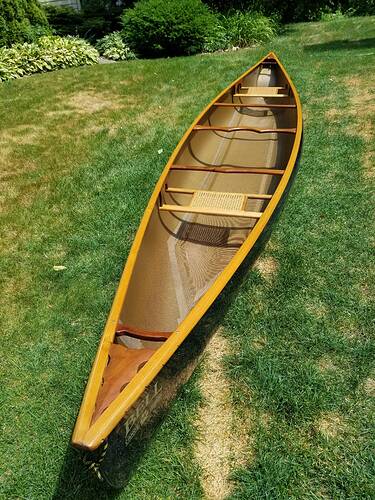 That’s a beauty. The Northwind has a spot in my heart. We we did a BWCAW trip in one years ago.

This Northstar has green gel coat. You can make out the decks, seat trusses and kneeling thwart as darker than the gunnels. The light reflecting from the thwarts makes it hard to tell but they look more like the gunnels.

This thread should be useful:
https://forums.paddling.com/discussion/1227389/which-bell-canoe-layup-is

Good thread kona. I think it still leaves some ambiguity around boats built in 2003. I’ve also seen quite a few ads for used Bells that claim to be black gold but aren’t.

Rob - maybe you can ask the seller to send you more pics of the interior. Feel free to post or send to me as personal message and I’d be happy to give you my two cents.

The decks and seat drops don’t help identify the lay-up since they were same for all lay-ups with wood trim.

My read of that thread is that by 1999 they were skin coating most of the black boats. Why anyone would order a black gold boat with colored gel coat is beyond me, but then again I don’t understand why anyone would order gel coat ever. North Star canoes is moving away from it now, I believe.

p.s. that link only opens on my laptop, not on my iPhone.

And on the layups:
"BG BlackGold Combining the stiffness and abrasion resistance of carbon fiber with the excellent tensile strength of Kevlar®, BlackGoldTM is the finest canoe laminate available. It is light and stiff enough to move your Bell canoe through the water quickly and efficiently. It also brushes off impacts that send other composites to the bottom of the lake. If you need a laminate for the long haul, BlackGoldTM is it. Available with clear gelcoat.

WG WhiteGold Long a favorite of Bell solo paddlers, WhiteGold is a smart midweight laminate choice. An outer layer of fiberglass provides good abrasion resistance and ease of repair. Cross-hatched Kevlar® inner layers and a sturctural core round out this affordable performance package. WhiteGold pro- vides all the advantages of composite construction for the budget-minded canoeist.

KC KevCrystal The lightest laminate our workshop offers, KevCrystal inserts a custom bi-weave layer of Kevlar behind a durable gel coat. This process is why our KevCrystal is renowned for its stunning moiré pattern. Foam core ribs, and internal reinforcements increase stiffness. Beautiful, yet lightweight, KevCrystal is for those pad-
dlers concerned with maximizing their weight savings. Available with clear gelcoat."

and on the topic of trim (for posterity):

"TRIM
Bell Canoe Works offers several distinctive trim options. These trim
packages are selected to complement the design features, hull material, color, and appearance of our canoes. Like our hulls, the trim and outfitting installed in every Bell canoe has to meet our stringent quality standards.

For those seeking the perfect union of beauty, form, and function, our wood gunwales have an appeal that is subtly alluring. We use solid strips of premium white ash for our wood rails. These are shaped to a profile that allows an easy grip for portages and keeps weight down by removing excess material. Sculpted walnut deck plates crown each end of the canoe. Thwarts and yokes are white ash (walnut on BlackGold models). Walnut seat drops are interchangeable for height adjustment. Everything is cut, sanded, and oiled to perfection. Wood trim is available as an option on all composite and some Royalex models.

Our two-piece bronze anodized aluminum gunwales offer the sleek profile of our wood rails in a low maintenance trim package. Anodizing pre- vents oxidation and complements the classy Bell hull shape. They provide much more stiffness than the typical one piece aluminum gunwale. Rivets are placed from the inside of the hull for a clean look with no exposed rivet heads. Thwarts and yokes are white ash (walnut on BlackGold models). Walnut seat drops are interchangeable for height adjustment. Aluminum trim is available on composite models only with a weight slightly less than wood trim.

My 1999 BG Merlin II has a clear gel coat and so did my 1999 BG Northstar. I looked at a number of them at the time and never saw a skin coat BG boat at the 3 dealers I shopped. Personally I’m happy to have the abrasion resistance and my Merlin II has taken a lot of abuse without ever getting damage near the fabric. Older Bell catalogs also stated that BG was fine for mild whitewater but they do not mention whitewater capability for current Northstar black lite boats; I don’t know if it’s because of differences in lay-up or the fact that they now offer an even tougher IXP lay-up. The black lite lay-up in current Northstars is sure nice…stiff and light.

Look at CEWilson post from 2010… He is a pretty good historian. He worked for Bell in a high up position in the 1990’s… He left sometime early 2000’s IIRC… There were so many experimental layups I give up on keeping any of them straight

Turns out this jewel weighs in the mid 50’s. Even subtracting 2-3 lbs. each for the green gelcoat and the wood trim it is hard to get that back down to the listed weight for KevCrystal. So it is BlackGold or maybe even WhiteGold? Interestingly enough the outwales are cherry! I’ll try to post a couple of pictures. 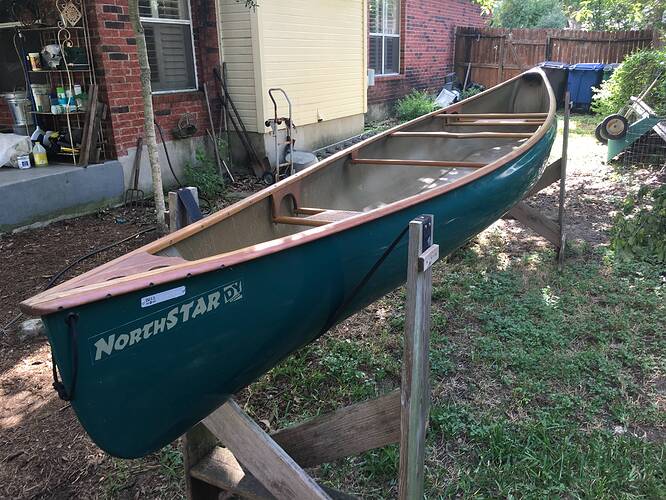 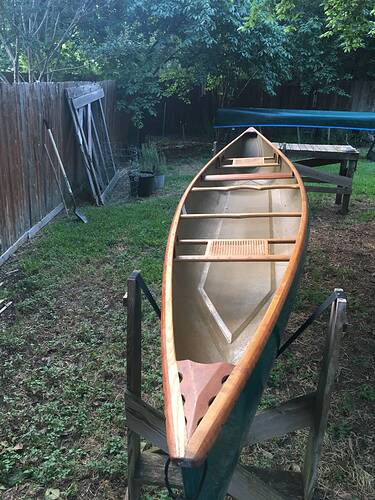 seems to be WG
This is what Charlie Wilson wrote several years back "
Bell’s Fiberlar was a three blanket E glass lamination with a gel coated exterior with an arimid partial bottom with a polyester core-mat center and some arimide stem pieces. Fiberlar was discontinued when ABS came on line, ~2000.

White / Gold had an e glass outer blanket under a gel coated exterior, an arimide bottom with a core mat center, an arimide blanket, an arimide diamond and another arimid inner blanket that, after the mid 90’s was 25% black Kevlar 29 and 75% Kevlar 49, the Bell “tweed”. I use the term arimide because Bell started purchasing European goods which must be Twaron, not Kevlar, in the early 2000s. Every other woof strand is black aramide #29.

Pre 94 Kel Lite and Kev Delux Hulls had a 30" longitudinal section of s glass immediately under the gel coat, this was dropped for cosmetic and weight reasons in 1994.

Black/Gold started with clear gel, which could be special ordered opaque and is now often skin coated. The lamination starts with a carbon blanket, carbon bottom and center diamond, all black, then a tweed blanket, a tweed bottom and diamond and another tweed inner blanket. Newer black/gold hulls may have foam cores. Almost all tandems and Magic have foam cores replacing several layers of fabric to reduce weight.

The above from my Word Perfect file “Bell Lamination Schedules” dated 1994, later converted to Word and last updated 1999."

That it has cherry gunwales is nice… Bell sometimes did that. It seems to be in very nice shape.

My Bell Magic (solo), black gold with wood trim weighs about 35 pounds. You can see a few glimpses of the interior in the short video on this page.