Hello everyone. Heading up to the Apostle Islands/Bayfield, WI area in a month and am looking to see if anyone had any good experiences with an outfitter while exploring the caves up there? Too new to go by ourselves…just looking for a good recommendation about which outfitter is worth the money. Half-day or full-day trips. Thanks for the input!

recommended outfitters
Living Adventure - Gail Greene’s outfit. In summer they are based in Bayfield. Trips of various lengths. They supply kayaks and gear or bring your own.

Woods & Waters Ecotours based in Cedarville MI (eastern UP) takes groups up there too. Your kayaks or theirs.

Uncommon Adventures run by Michael Gray, a renowned instructor and guide who is just back from Greenland, is also a gourmet chef. An added incentive.

Also a couple of outfitters I can’t recommmend. Their absence from this list is intentional.

3 big local players
Full disclosure, I worked for Gail way back in the day guiding those trips and longer trips into the islands. I have first hand experience seeing not only the culture of the company I worked for, but that of the other groups. If you took the time to compare the three local outfitters, you’d see that Living Adventure emphasizes staff training, good equipment, and has many extra perks in their trips that the others do not. I’ll always recommend them first. Lost Creek Adventure located in Cornucopia is run by a friend, and is also running a tight ship. They’re located much closer to the mainland caves so the trip length doesn’t tack on a lot of drive time, but you still need to get yourself to Cornucopia. Trek & Trail in Bayfield didn’t use to get my recommendation, but they’re under new ownership and have turned around. I won’t elaborate on what they were, but I can say that their training and professionalism has greatly improved. I know many of their senior guides and they are good people. All three are a great choice for an enjoyable and safe trip. They all abide by the extra strict regulations that the National Park and local municipalities have enacted due to some less than stellar operations putting people at risk. You may end of making your decision based on availability of dates.

I hope ltrautman, the OP, found his outfitter. This is an old 2015 post. I would say though it likely still applies given what I saw in July 2018. These outfitters put wet suits on people and gave them some instruction. One of them had a safety boat trailing the pack at the mainland caves on a day that really didn’t need it.

I didn’t get up to Living Adventures in Red Cliff but I did get to Trek and Trail. They had a barn full of sea kayaks and a nice well stocked store.

These 3 were much better than the outiftters I observed at Painted Rocks. They must have been one of those business man operations.

@Overstreet said:
I hope ltrautman, the OP, found his outfitter. This is an old 2015 post. I would say though it likely still applies given what I saw in July 2018. These outfitters put wet suits on people and gave them some instruction. One of them had a safety boat trailing the pack at the mainland caves on a day that really didn’t need it.

developed with those same local outfitters, said conditions were for intermediate to advanced paddlers. I advised the young guide that those 2 to 2+ foot waves were rebounding to make much much bigger waves off the cliffs, and he basically called me a pussy or words to that effect.

So they’re no different than the ones at Painted rocks.

@Overstreet said:
So they’re no different than the ones at Painted rocks.

Don’t know why “painted rocks” makes me laugh, but it does. It’s the PIctured Rocks National Lakeshore.

@Overstreet said:
So they’re no different than the ones at Painted rocks.

Well I hesitate to extrapolate my experience with that young dude to every guide and every outfitter. That was one experience I had, and I haven’t had any other experiences with the area outfitters on the water.

Painted…pictured…wasn’t a favorite either way you name it.

@Overstreet said:
Painted…pictured…wasn’t a favorite either way you name it.

Did you paddle it and not like the area, or not paddle it because you didn’t like the crowds?

@Overstreet said:
Painted…pictured…wasn’t a favorite either way you name it.

Did you paddle it and not like the area, or not paddle it because you didn’t like the crowds?

Seas were “washing machine” like at 2 ft, and 3 sec. going to 4 ft. We did 1.25 miles and decided it was no fun. Colors on the rocks were less vivid than Apostles Islands. Caves at AI were more interesting than cliffs. We had better food experiences at the local restaurants in Bayfield than Muninsiing. (sp). I liked the camp ground in Bayfield better. 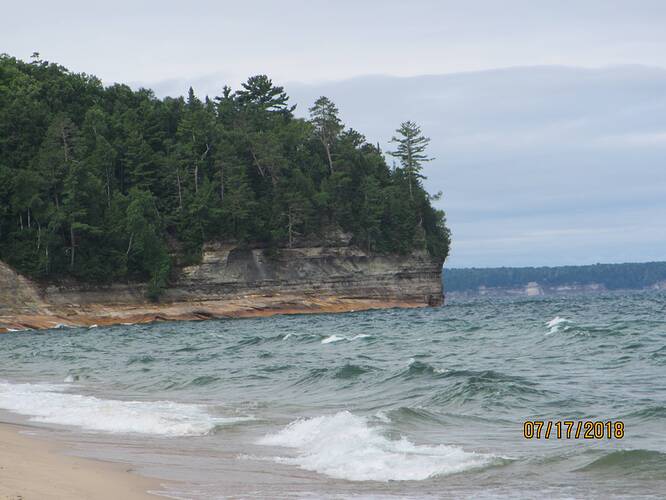 4000×3000 849 KB
Of course the outfitter launched out bunches of kayaks with rookies and not a wet suit among 'em into the same stuff. But this was the outfitter that sometimes lost one and needed the assistance of the local authorities. 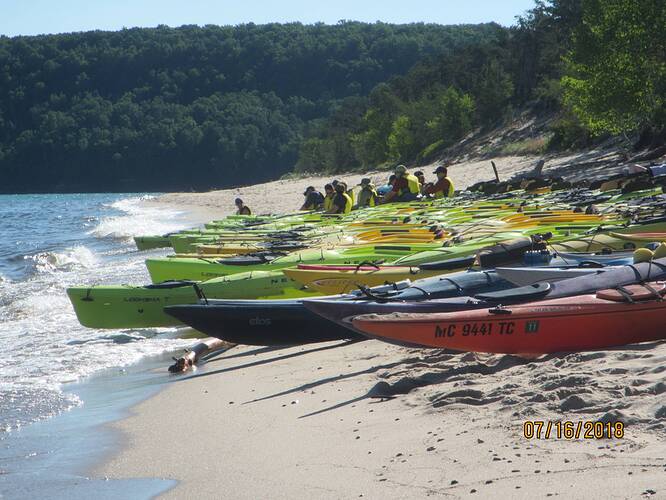 It was time to move to other land based pursuits. Falls were nice. The dunes at the upper end of the park were cool, literally. On top of one of the dunes the NW breeze camp off the lake and generated clouds right above us. 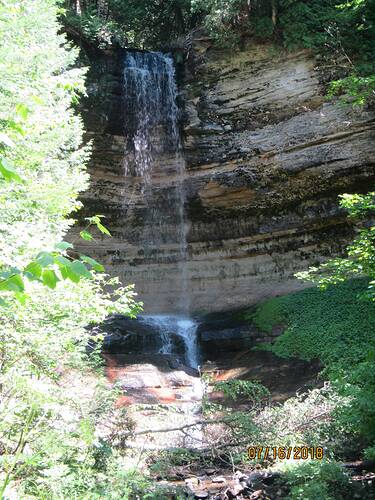 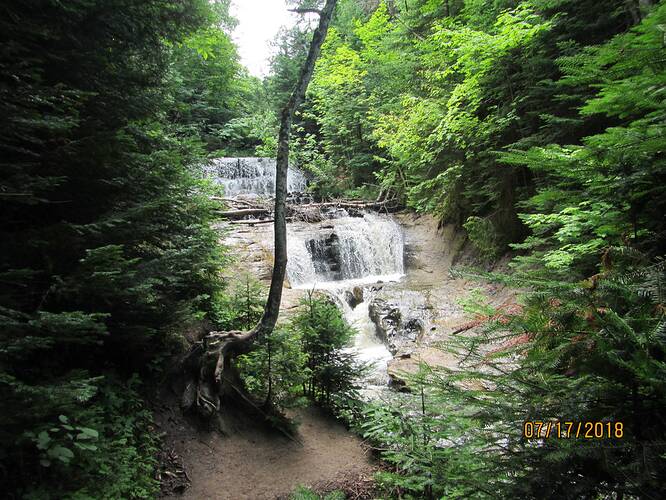 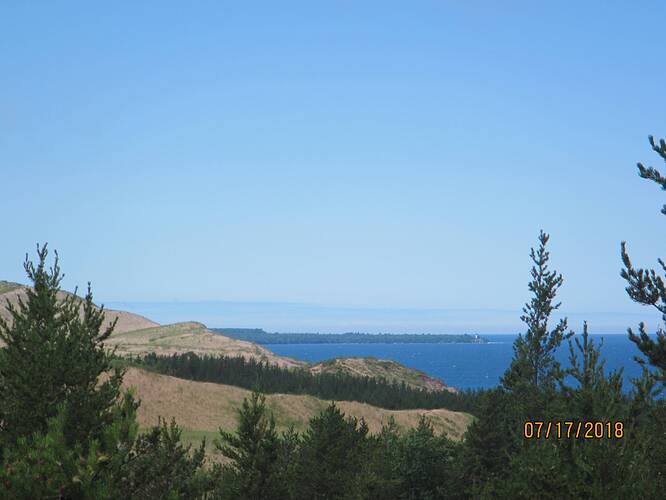 Either way were five weeks into our trip and a little weary. Both are worth the trip. But our experience was better in the Apostle Islands.

@Overstreet Great photos. You must be referring to “Uncle Ducky’s,” the infamous tour operator whose “guides” once abandoned about 17 tandem kayaks (and paddlers) when weather got rough. Tour boats and SAR had to pull them out.

Here’s a nice video about the Hiawatha Water Trail and Sam Crowley.
https://www.outsideonline.com/2331761/michigan-trailbuilder-sam-crowley

This post is from a while ago but still comes up at the top of the search, so thought I’d comment.

There are several listed outfitters in the area, and unfortunately some of them not great. (Safety, gear, honesty…)

The Park Service website has all approved outfitters listed here https://www.nps.gov/apis/planyourvisit/commercial-services.htm No one who has had trouble in the park makes that list or lasts long.

You can also look at review sites like Yelp, Google, Trip Advisor and read the reviews and responses from the owners.