Looking for a starter for a 4 yr old. She loves sitting in mine, but kinda tight for doing anything but a 5 min paddle. Thinking of a short 6’ sit on top maybe?

I have 2 Wilderness Systems Picollo’s that the grandkids use. They are no longer made, but used ones come up for sale often. My granddaughter in the photo was 6 when it was taken. 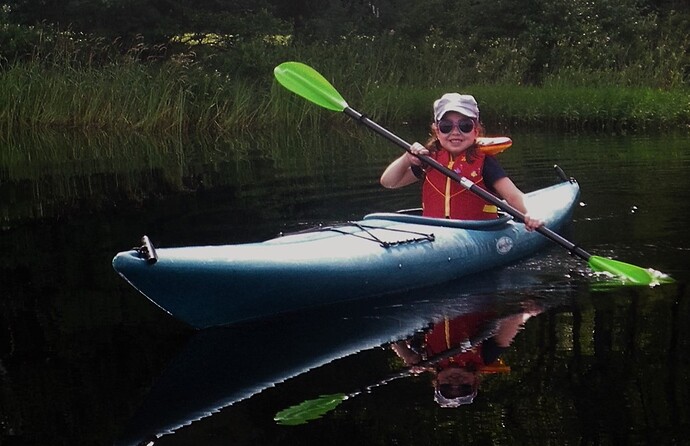 I have tandem kayaks for my family. If I picked up singles for them they wouldn’t be able to keep up with me. When they’re older and stronger they’ll get their own.

If you can find on used I’d recommend a Tsunami SP. WMCKA uses them for the kids program at the annual (but not this year) Memorial Day symposium. You might also consider building a SOF like a Yost Sea Put or a Kudzu Craft Tadpole: http://www.kudzucraft.com/web/boat-designs/boats

I do for kids what was done for me. I get a cheap but sea worthy kayak and let them have at it. Probably pick one up for cheap on Craigslist or Facebook Marketplace.

When I was a kid, we used whatever we could get our hands on an always had fun. No need to spend a lot.

I got two different kayaks for my grand-kids to paddle. My grandson paddles an EPISEA . My grand-daughter {that lives close} paddles a CD Raven. 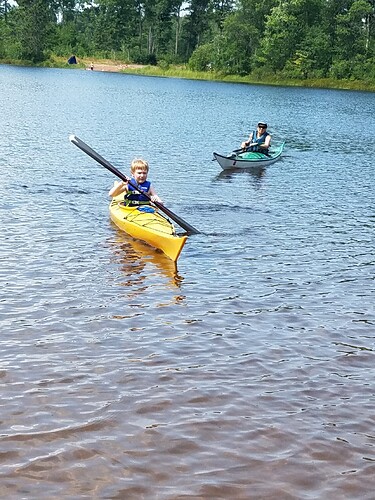 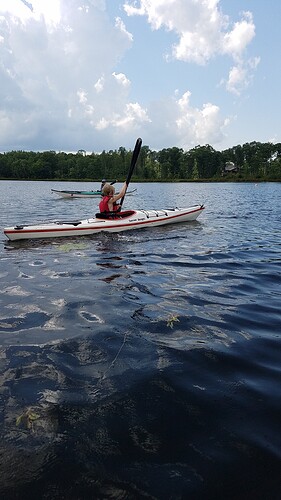 You might consider a Perception Prodigy XS. Length, width, deck height, cockpit are designed for a successful experience with small paddlers, minimal banged knuckles, decent speed and tracking. The design affords performance to paddle with a group, with the occasional opportunity to get wet. Oldest grandson has now outgrown into my eddyline, but the Prodigy XS is still good for the next 3 grandchildren, ages 7-12. Retail price is now over $400, but there are deals, and a used one would probably not have been abused like we adults sometimes do. Specifications: Length: 10’ Width: 23" Weight: 26 lbs. Deck Height: 10.5" |Cockpit Length: 28" Cockpit Width: 18" Max Capacity: 150 lbs.

Where are you located? There’s a local guy (northwest of Pittsburgh, PA ) who is selling two nice-looking wooden ones he made for his own kids: one is sized for ages 5 to 10 years who weigh up to 60 pounds for only $275.

Two handcrafted wooden kayaks for kids. In addition to high quality wood construction, both are...

I’d also check out the new wave kayak by lifetime designed by the original sit on top designer Tim Niemier. Small children love swimming and playing with their kayak as much as going anywhere and they rarely want to go far. This is an ideal first kayak.

My son started out on a Lifetime Wave at about 4. 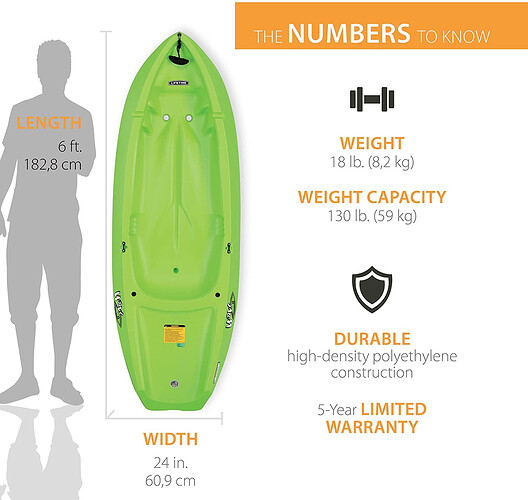 As he really liked the SOT’s and the Banzai, has (Unlike most SOT’s) a V displacment hull so it’s fast unlke the Lifetime which was “Stable” He liked that as it had a swim in back so he could bail out on the water and get back in Even at 4 years old.

the Banzai is nice as it has a built in Towing cord for when he gets tired, though now not so much. Both are good boats as SOT’s go. The appeal of the Wave, is it’s cheap. $99 USD even cheaper if you find it on sale or on craigs list, so even of it turns out the little ones do not like kayaking you haven’t invested too much.

Both Boats are unsinkable and fairly thick roto-molding if you do any river running so you don’t have to worry about punctures.

Recently we took our boats to FLA, to tour the Mangrove Tunnels and See the Manatees, and after my son got tired in the Chop in the bay near Crystal River, My wife took over his boat and he hopped into the tandem I had brought. The Banzai with it’s 230Lb weight limit may be the last boat you need to buy for your kids. (I have two so he can go out with his friends.)

Vagabond Kwando is the best sit on top for kids. Sold at sitontopkayak.com in America.

Thanks willow leaf , but I’m in southern Ontario.

I found a used Perception Dancer for my significant other’s grandson. Tracks well enough for cruising and he can grow with it as his river skills develop. For now he can paddle/camp with us while being the “captain of his own ship”. I’m hoping that as he gets older and tires of paddling with the old fuddy duddies he will in due course find friends his age who paddle. When I was young those adventures with friends built enjoyment that has never worn off.