Do you have any special memory of a particular meal someone cooked on a multi-day trip that knocked your socks off, so much that you remember it to this day? If so, what was it? It is often said that when your knackered after a long day, even the most basic meal tastes great. But I envy those talented souls who can work magic, even with the most rudimentary stoves in less than ideal conditions.

I remember an incredible dessert while in the Broken Group Islands, essentially an Austrian pastry roll vaguely resembling our apple turnover - it is often called Der Pawlata 360. In Austria the oven is so hot that they use something like a pizza paddle (with a very long handle) to retrieve it from the oven. This extended paddle is named after its developer, ‘Edi’ Pawlata.

Yes. Lots of them. My friends can really cook. Lasagna, green chile enchiladas, pizza, Great Asian food.
We had a large group on the Willamette River in Oregon. The weather was pretty warm so my friend hacked a way into the woods from the beach next to the river. We moved everything into the woods in the shade. It was Italian night. We had Pasta, anti-pasta, garlic bread, salad, red wine and homemade banana bread. Italian Night in the Grotto. Splendid.

Hmm, backpacking not paddling, but we’d had a chilly windy day, threatening rain. Cooked up some pouch chicken, dehydrated veggies, loads of noodles, and some really basic seasoning.

But it was hot and filling and no chicken noodle soup or stew or casserole has measured up since. It was amazing. I can still taste it.

Wife is occasionally inspired to pack us some fancy meals, and kid has been the dinner cook for her canoe camping group the past 2 years, so maybe some year something will taste better?

The killer dinner of all time was a few years ago in the Ruby Mountains of Nevada at 9,800 feet. I backpacked in with some new people my friend knew. They brought steak and lobster packed in dry ice.

We made ice for the bourbon. Salad with vinaigrette and smoked trout. We had three backpacking stoves going. Steak and lobster with fresh vegetables. Then ice cream with homemade chocolate sauce. It was hard to believe. I thought they were crazy, then I wanted to be crazy just like them.

I think the best (so far) was marinaded elk steaks grilled on an open fire and served with a fresh herb salad and 2 sides of Mac-and-Cheese and pan fried breaded green beans and then having cherry pie for desert. My wife and I did that meal, but when I go camping alone I still revert to canned foods for the convenience of it. Chunky soups, chili, fruit cocktail and so on. So any fancy meals are a real treat for me when I am kayak camping.

Many years ago I was working for an elk hunting outfitter in Colorado. We had an elk down and I put the heart and liver in a plastic bag in my saddle bags and led 2 mules out with the meat, head and hide. Back in camp, my brother was the camp cook. While we drank some bourbon and warmed up in the old wall tent with the wood stove going, he proceeded to cook the sliced liver right on top of the stove with bacon and onions. Even people who said they didn’t like liver had two helpings until it was all gone. The tent smelled like perfume. .

A Campbell’s Chunky soup, heated in the can next to a camp fire.

One of my favorites is a dutch oven baked chop, served with a side of yellow rice, pork gravy and whole berry cranberry sauce. Takes about 10 minutes to prep and 45 minutes in the dutch oven. Quite an attention getter in camp and I have no problem getting food partners on long trips. 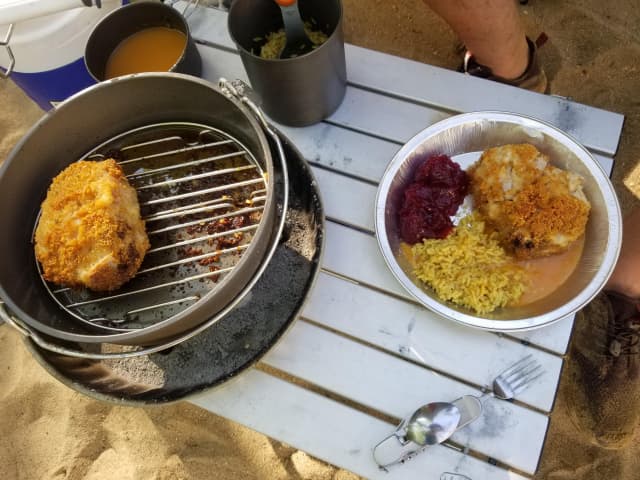