Cruising craiglist, I find for sale ad for 2 paddles.

One is a Bending Branches, decently priced at 60 bucks, in like new condition. Retail for over 100 bucks. Not interested; have several different models already.

Then I look closer at photos of the paddles. I hadn’t read the description of the 2nd paddle yet. I’m thinking, “Is that paddle what I think it is”???
If it is, that 40 dollar asking price “must” be a mistake made by the seller ???

Anyway, I start trying to make phone contact with seller; can’t let that slide without making sure.
If seller had 10 of them @ 40 bucks each; I’ll take all 10!!! When, where do you find a like new condition Blackburn Design paddle for 40 bucks???

Can’t make contact with seller; leave multiple messages. No return message…
Next day I get a return call. Nice guy, with not so fun message. Paddle had been sold. I’m thinking somebody jumped on that deal like white on rice, shortly after it hit Craigslist.

A tear trickles down my cheek…

Like the Rolling Stones song says, “You can’t always get what you want”!!!
Oh well; I don’t have to answer the wife’s question,
“Why do you need another paddle”??? 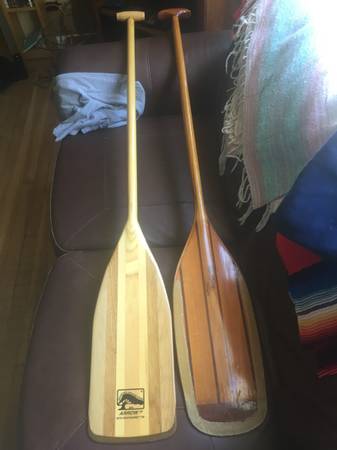 Cause I wanted it; I needed it…
Sometimes we confuse want, and need.
I was not confused!

“I needed” that paddle!!!
It would have looked great as a companion for the Blackburn hanging next to my computer. 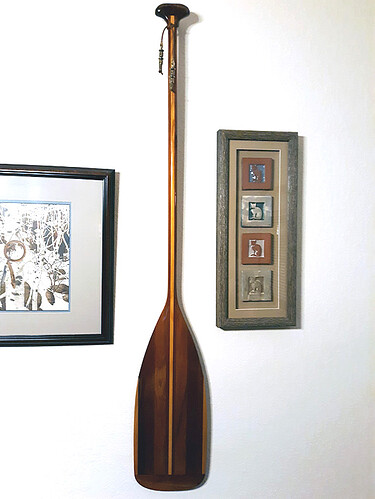 The Blackburn on the wall is the prettiest. The Bending Branches belongs in the boat shed. It shows too many production methods and lack of individuality (charactor)

I want. Just in case it goes missing…

You would have felt guilty for stealing that paddle for $40 anyway.

Maybe?
Probably not for very long…

I somehow think Bob does not possess guilt

Be kind; I helped you find your camera on the bottom of the river, after you pulled out of front of me, and I in my Whitesell bulldozed you…

Ah, how soon we forget…
Hope you two are well; have missed seeing you.

I was thinking of you but not of THAT incident which was entirely my own fault for exiting eddy without yielding to traffic… I remember our drawn out efforts to try and get a little orange camera that was seeable but not gettable. We got it. It worked. Lots of effort for a little Pand S ( or later POS) camera!

Bob…what model is your Blackburn? I have 4 that people keep trying to buy from me…haha.

Model of Blackburn?
I have no idea which model it is, but would appreciate any information anyone could provide.
It is not “really important” to me to know the model.
Seeing it hanging on the wall, next to my computer everyday is good enough for me.

I “really need” another Blackburn, as a companion for the one I have.

Have one I might turn loose of. It was one of their most expensive paddles. Called the “Lutra”. They considered them all seconds, cause they were so difficult to make, and expensive …they labeled them all 2nds. It is a cool design, with a double dihedral design on both sides of the blade… Was made as a solo style paddle, so could spin it and use either side in your strokes, or transition from one stroke to another Has carbon fiber on both sides of handle for strength in the shaft.shift. Will send you some pics of it shortly. Might consider letting it go, as I don’t use it much, as part of payment on the shadow?

Here it is…she’s a beauty! 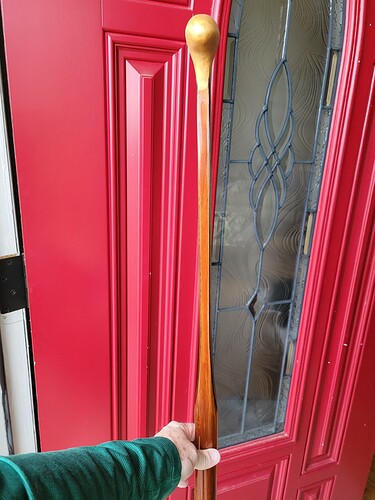 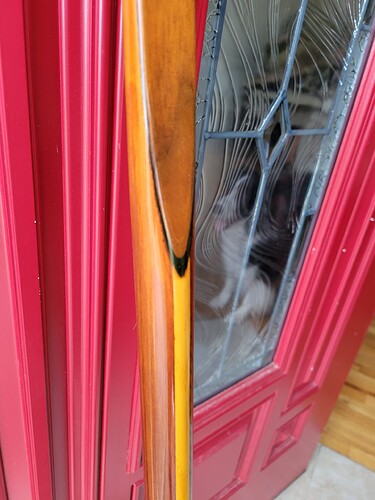 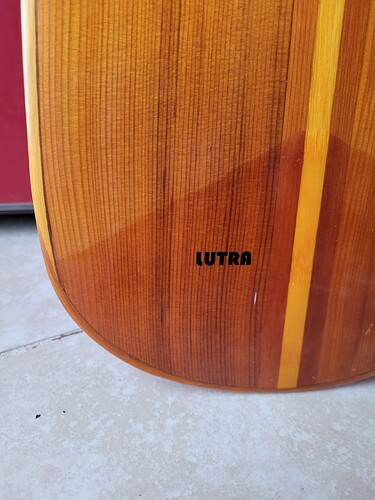 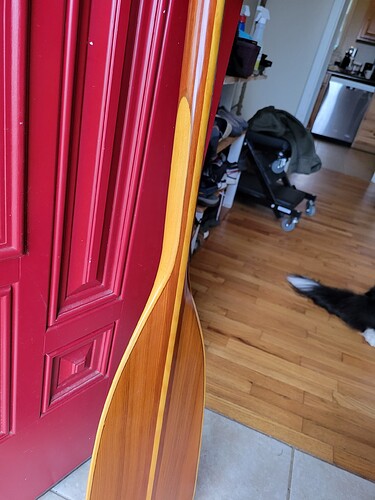 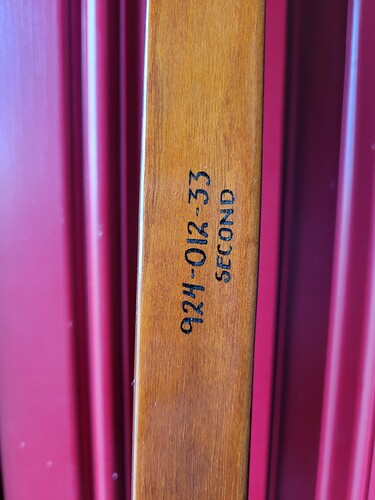 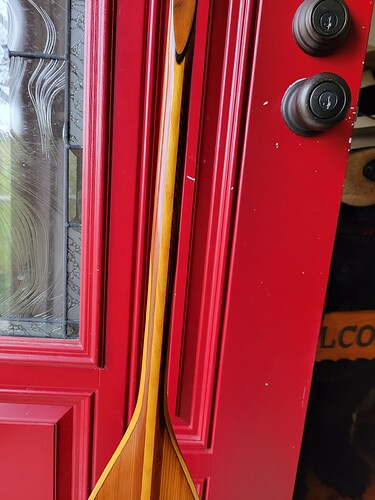 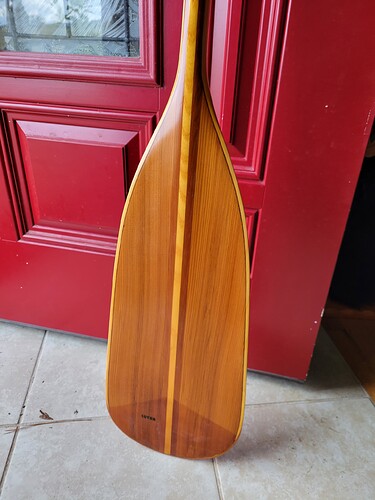 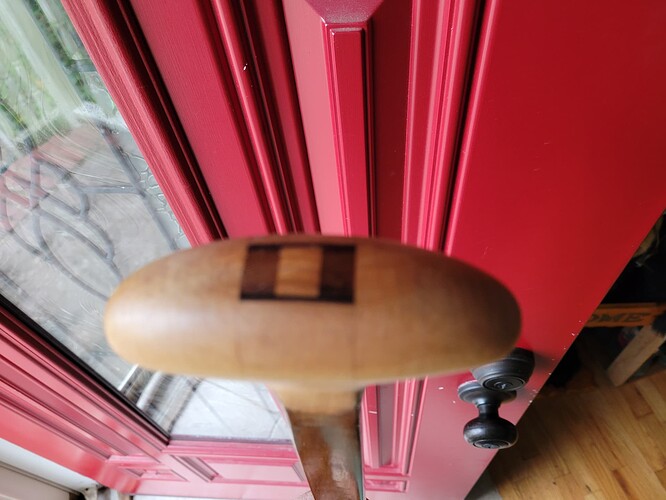 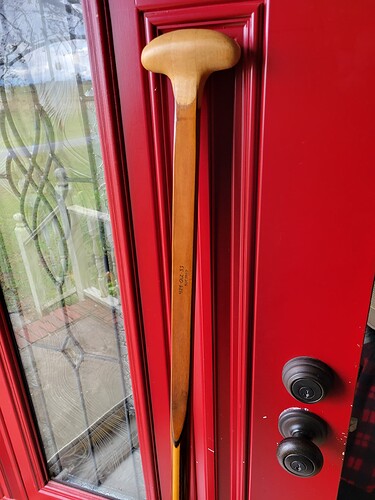 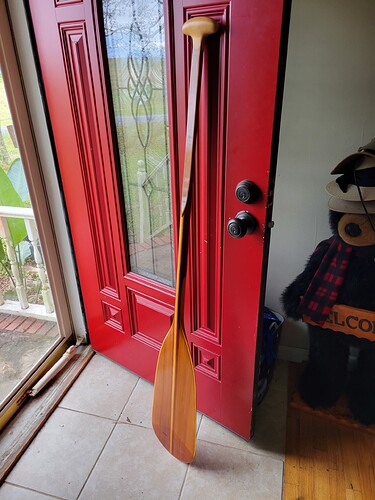 I also have an S 2.5 bend, which I use a lot, a 5 degree bend, a 15 degree my wife uses, and the Lutra. At one time, I had 2 nighthawks, I bought from a canoe shop in Houston, TX. That is where I also bought the Blackburn paddles from. The owners name was Bruce something…can’t remember his last name, but they were big into the freestyle solo thing. I paddled at an event Bruce put on, and Charlie Wilson was there. Wish I could remember the name of the shop…heck, I was around 30 then…haha, now 62…time Flys. I miss freestyle paddling, and those Nighthawks. I also have a Blackburn catalog form that same period in mint condition.