I paddled a vintage Blackhawk solo earlier this year that I found under my neighbor’s house on the Satilla River in Georgia. I immediately fell in love with it. Very nimble and very quick. I asked to buy it but they said it was their friend’s. I was disheartened, but just got a call saying I could have it for free. Needless to say I am excited to go get it. However, it needs some tlc. There are no cracks or structural damage, just cosmetic. I am going to sand it down and repaint it because they put a crappy camo scheme on it. Does anybody know much about Blackhawk canoes? I want to get Blackhawk decals for the front to put back on after I paint it but I haven’t seen much about them at all on the internet. 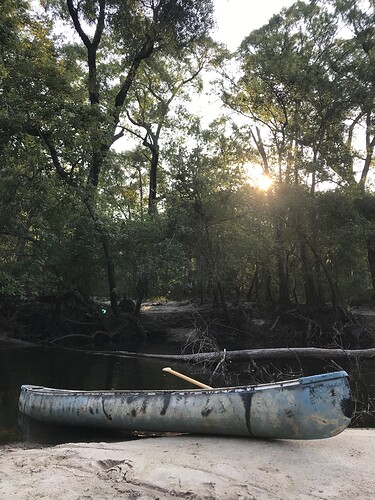 Greetings OkefenokeeRambler87!
Blackhawk Canoes were made in Janesville Wisconsin, near where I live and went out of business in 96 or 97 by my (admittedly sometimes flawed) recollection. Most were designed by a fellow named Phil Sigglekow, though there were a couple models, the Proem and Covenant among them, that were designs by the freestyler Pat Moore. The Proem and Covenant were very strongly flaired at bow and stern. The Sigglekow designs, according to my very few and brief conversations with him, were influenced greatly by John Winter who is most closely associated with Swift canoe. They were very well made boats and they made several “series” designed for various usages. Many folks feel that they are “tippy” when they first try them out, though they have a ton of secondary stability and settle down some with a load. After 20 mins or so of seat time most folks get used to it and learn to love it. That is, I believe, at least the case with the Adventure, Hawk and Pat Moore series designs.

The wilderness tripping (“fast cruising”) were the “Adventure” series and can be recognized by a lower, longer rear deck, almost kayak-like, and have a sort of parallelogram stem and stern lines when viewed from the side on the water. I own two of these, a green Starship and a beautiful blue Ariel. The Zephyr (~14ft) was the smallest of this series and the Phantom was an 18ft tandem in the adventure series. The boats in this series are relatively low volume, low windage, and very mildly “fishform”, having their widest point along the waterline slightly in front of the centerline. At the gunnals this is not that visually apparent. They’re great cruisers but if you try to push them past their hull speed, the stern will drop and you’ll start throwing a heck of a wake at great effort with little reward in speed. They have a great glide and you can paddle them all day long without much effort if you don’t try to exceed their “speed limit.” They’re great cruisers, but not racers.
I have less experience with the other series, though perhaps “TheBob”, who posts here as Jedi, can help you more with the “Hawk” series, which includes the Shadow (in several lengths), Nighthawk, and Kittyhawk. These were also very lively boats but designed for more general usage. They, too have basically straight, sharp, bow and stern stem lines.
There was also a “Combi” series which have more traditional re-curved bow and stern lines. (Not unlike the one you have pictured.) As I recall they had a sharper entry line than seems to be pictured… Also those deck plates and gunwales are atypical for all the Blackhawks I’ve seen, but the Combis are the ones I’m least familiar with, so I’m unsure. There should be a serial number engraved in the stern which would help at least in determining the year of manufacture. I have a friend who paddles one of these and they are nice boats also, but for more generalized usage. They were the widest and most stable of the Blackhawks. I think all of the Combi series (and I’m not sure how many there were or in what sizes) were set up to be paddled either solo or tandem (with an extra seat). Check to see if there are brackets to take extra seats. I think also in the Combi series, unlike the other Blackhawks, Sigglekow took a page out of Volvo’s book and built cup holders into the flotation tanks. That would make a positive ID on the boat. I believe the Combi series was symmetrical at the waterline, though I’m not certain of this either. Perhaps there is someone here who knows Combis with greater certainty than I.

Blackhawk had two logo designs depending on the vintage. The earliest said “Blackhawk Canoe” and had a stylized recurved bow logo, like that of a voyageur’s Great Lakes canoe wrapping around the “B” of the name. As I recall these logos were all gold in color. The newer logo was the silhouette of a hawk, as seen soaring, with the name “Blackhawk” cut out of the wingspan. The silhouette was black and some had gold shadowing in the letters. That is the logo on my Starship and, as I used to work in a sign shop and am still in contact with my old boss, perhaps I could make a tracing and cut a copy logo to add to your boat if you want to try a bit of restoration. I couldn’t help with the older logo as I don’t have one to trace. I don’t think there would be any copyright or trademark issues since it is restoration, not for commercial use, and of a company that is no longer in business. Heck, any Blackhawk (that hasn’t been broken in half or something) is worth an effort to save and, if its free, its almost a no-brainer.
Hope this is of some help to you, and Happy New Year!

PS: If you google Blackhawk canoe and select “images” , on row 2 colmn 4 there is a picture of the old logo on a Moore Blackhawk. Also Row 2 colmn 1 is a purple Zephyr that GuideboatGuy and Rena renovated. That’s me in my Ariel on row 3 colmn 1&5. Darned if I know how they got there… I think some of the Blackhawks on stands are “TheBob” "Hawk"projects, though he’d have to identify which ones are which. 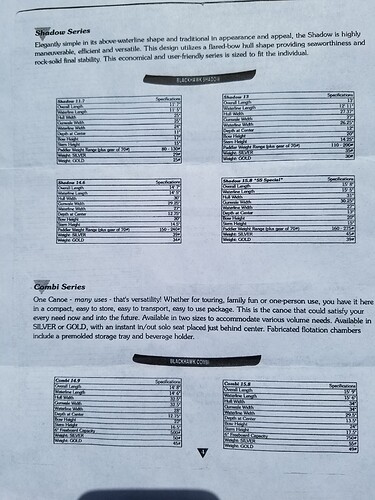 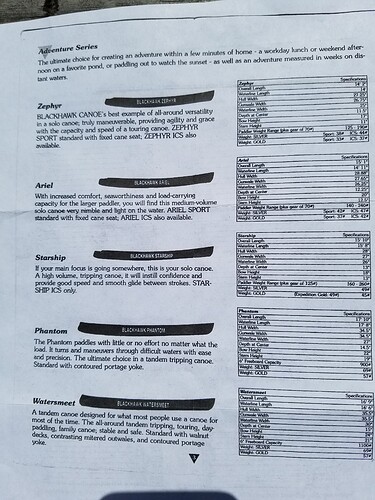 The logo on the canoe may be an outfitter, not the manufacturer. Look in the stern for ID # or manufacturer plate.

I am with sedges and Tom L as this doesn’t look right for a Janesville Blackhawk canoe. Google revealed that there is a BlackHawk livery, Yes the MIC on the outboard stern ( three letters at the beginning will tell all)
No matter what it is glad you are having a good time with it.

I’m late to the party here I guess. I’m also in agreement that it does not look like any Janesville Blackhawk I’ve seen. I was also thinking that looked more like an outfitter decal.

I did see the the little video you put on instagram of you paddling it. The sides look a little more rounded than the picture seems to show, but it could be the paint job throwing off either views. I would very much like to see the HIN#, you’ve got me curious!

More pictures of the inside/outside, different angles, etc. can also help if there’s some construction design unique to certain brands.

The most important part is you like paddling it, that’s exciting!

Well, I agree (and mentioned) that the entry lines, gunnals, and deck plates don’t look typically “Blackhawk”. That recurve on the bow looks a little more extreme than I recall also. I don’t think its an Adventure , Hawk, or Shadow of any sort. Or Moore. Combi, well maybe. BUT one thing about Sigglekow’s boats, though, is that he was always always experimenting. I’ve seen Starships with deck plates that are in contrasting colors, Blackhawks with different labeling on the sides, I’ve seen a Covenant with a mast step that sure looked like a factory build… there are quite a few atypical Blackhawks floating around. I sure wouldn’t want to call anyone a liar and say it definitively is NOT a Blackhawk based on the photo. Blackhawk did contract work for other companies also - rental kayaks for example. Canoes? Maybe…I don’t know… The serial number might tell a lot. And I don’t know if the serial number would reflect Blackhawk manufacture if it was produced under contract for some other company?

Don’t think it’s a Blackhawk in any way, shape or form.

Looks as if your canoe has cheap, one piece, thick plastic decking on both the bow and stern. They might be replacements for busted decking, but I doubt that.
Have never seen a Blackhawk that had plastic decking.
Also the gunwales don’t look like any gunwales I’ve ever seen seen on any model of Blackhawk.

That’s just my opinion; not the definitive answer.

P.S. At one time or another, I’ve owned about 18 Blackhawks. Currently own 6 or 8 of them; they multiply if you don’t check on them, or paddle them on at least a semi regular basis. 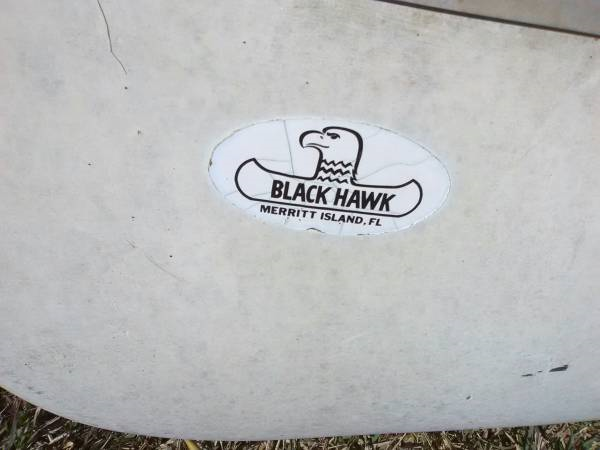 Another one popped up on Craigslist in your area. Although there was a Black Hawk mfg listed on the EIC database (HIN prefix:HHK), it was in Sumter SC, not Merritt Island FL. I doubt you would ever find decals now, but the design is so simple you might be able to have it duplicated.