I have a Blue Hole canoe with Serial Number 17A-7965 and a hull ID: TBH17319H788. Does anyone have any idea when this boat was manufactured and what are its specs? Also, I’d like to know what the S/N and HIN coding conventions are if there are any. I’m new to this website so please pardon me if I’m in the wrong forum. Please direct me to the proper page if I’m up the creek without a paddle…

Thank you for any advice that you can give me.

The boat was certified (built) in August of 1988 for the 1988 model year. The first three characters of the 12 character HIN is the manufacturer’s ID code and TBH indicates the Blue Hole Canoe company. The model is the 17-A which was more or less a longer (17’3") version of their iconic first model, the OCA (15’ 9"). As you undoubtedly know, it is heavy (78-80 lbs).

As far as the Blue Hole Serial number is concerned, it is unique to Blue Hole. Obviously, 17A denotes the model. I suspect they numbered boats sequentially as they were certified, irrespective of model, since I doubt that anywhere close to 8000 Blue Hole 17-A canoes were made. The HIN used by the US Coast Guard has undergone a number of format changes over the years which you can read about here, if you are interested:

So …tell me about this Blue Hole Canoe. It’s not heavy at all. Lighter than any Aluminum canoe and way lighter than 60 or 70 pounds. 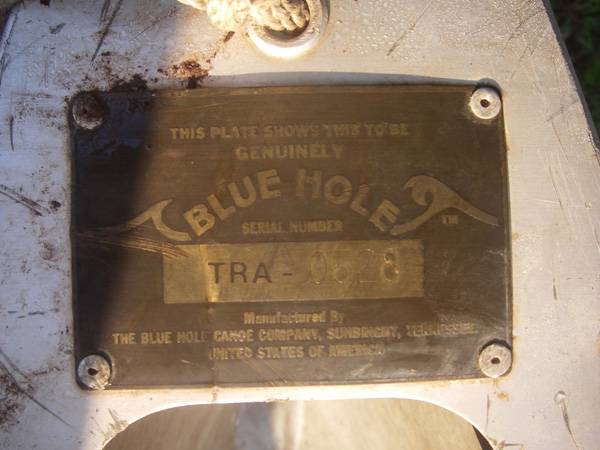 I believe the TRA prefix designated the Blue Hole Starburst. Measure its overall length. If it is 16 1/2’ long, it is a Starburst. But assuming it is a Royalex tandem (which the Starburst was) there were very few 16+ foot long Royalex tandems that weighed less than 60 lbs. The Old Town Penobscot 16 RX (16’ 2") was one of the lightest at 58-60 lbs. And back in the day, Blue Hole used quite thick Royalex sheet. Blue Hole specs for the Starburst indicate an estimated weight of 75 lbs.

Pblanc: Thank you very much for your comments and suggestions. Yes, my 17-A is a beast but very well built. I’ll check out the USCG link shortly. Thanks again. Very informative.