Yesterday I took my family out for our first paddle in a new to me canoe that has quite a back story. I found a canoe on FB marketplace labeled as a Short Hill canoe. The price was right so I went to Google to find out more. I found a Washington Post article from 1997 about a canoe store in Northern Virginia called Short Hill Canoe Company. The article said they sold Old Town’s but also had a line of canoes made by John Williamson of Blue Hole Canoe in Gordonsville VA. With a little more Google help I tracked down the previous owner of Short Hill. He confirmed a Short Hill ~ 16’ canoe would have been an OCV/ OCA. OCV had vinyl gunnals and OCA had aluminum gunnals. He also told me a bit about the canoe and its high sides for heavy loads or rough water.
So for the lump sum of $200 I picked up a new to me canoe. It appears to have been used very little. It has no bleaching, and only light scratches on the bottom. I should probably replace the thwart since there is a little rot where it bolts in. It was kept outside but under cover.
Yesterday’s trip was paddled up river to roast hot dogs on an island, 2 adults, 8yo and 6yo kids and food stuffs. Hopefully a few more paddles before winter hits and then my first overnight in the spring.
If you want a canoe, learn more 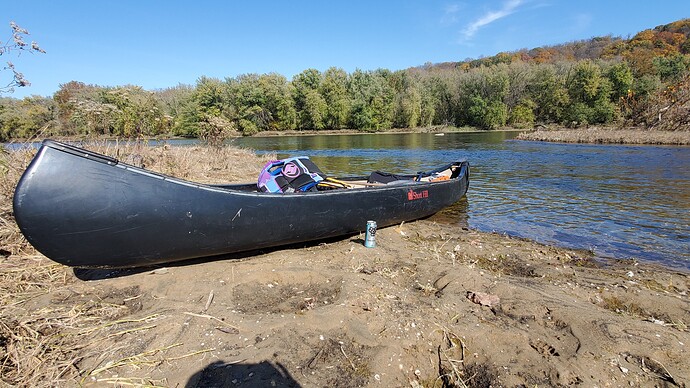 The OCA/OCV is actually 15’ 9" in overall length. The history of Blue Hole canoes goes back quite a bit farther than John Williamson and 1997.

The original Blue Hole Canoe Company was founded by Bob Lantz and Bill Griswold in Nashville, Tennessee in 1972 or 1973. The first 175 boats they sold were “Warsaw Rocket” hulls, molded at the UniRoyal Royalex manufacturing plant in Warsaw, Indiana. This was a generic Royalex hull and a number of manufacturers other than Blue Hole purchased these hulls from UniRoyal and outfitted them for sale.

Blue Hole Canoe moved from Nashville to Sunbright, Tennessee in 1974. At this time they were still outfitting and selling the Warsaw Rocket hulls. But in 1975 Blue Hole introduced their first model designed and molded in Sunbright, TN. This was the OCA. Although its dimensions were similar to the Warsaw Rocket hulls, the OCA hull had more fullness in the ends and a bit more depth and freeboard which made it a bit dryer in whitewater.

In 1990 the original Blue Hole Canoe Company ceased production. Around 1997 John Williamson, having purchased some of the original Blue Hole molds and the right to produce the designs and use the Blue Hole name, began producing boats in Gordonsville, Virginia. The reincarnated Blue Hole canoes had a slightly different logo decal. Williamson did not produce all of the old Blue Hole designs. He made the CCA/OCV which he called the Prowler, the TRA Starburst tandem, and the SRA/SRV Sunburst II solo. I can’t recall how long Williamson remained in business but I think it was less than 10 years.

I have seen and paddled many of the original Blue Hole canoes including OCAs. I don’t think I have seen any of Williamson’s boats but they were formed on the same mold. The outfitting is different with different deck plates and seats which are dropped from gunwale level. Otherwise it is the same boat.

Good info! Yes the boat is actually 15’ 9", just listed and an even 16’ on FB. And Hugh Grubb the owner of Short Hill did say Prowler which was the first time I heard that name and was able to cross reference to get OCV. I found this link https://www.gapaddle.com/blue-hole-canoe/ that talks about Mr Williamson selling Blue Hole due to health issues around 2003/2004.
I haven’t paddled enough different boats constantly to rate how it paddles but $200 bucks for good royalex, a good storied past is a win in my book.

Great find! I bet the kids loved the picnic on the island, sounds like fun. The story of the boat and it’s history is cool, but cooler is you taking your kids on an adventure!

The original Blue Hole canoes including the OCA were molded from uniformly thick Royalex sheet which made them heavy, but their strength was somewhat legendary. After its introduction in 1975 the OCA rapidly became the most popular whitewater canoe in the Southeast and was paddled both tandem and solo since there really weren’t any Royalex solo canoes until Mad River introduced the ME around 1980 and the Nolan Whitesell Piranha and Blue Hole Sunburst were introduced in the mid 1980s. Before that whitewater open boaters in the Southeast were usually paddling specialty made aluminum Grummans reinforced with extra ribs and a shoe keel.

Obviously canoe design has advanced a bit since 1975 but the OCA is still a very capable river canoe with great capacity. It can also be paddled on flat water obviously, although the design is better suited for river paddling. The considerable depth of the canoe and the high, recurved stems, while providing dryness do tend to catch a lot of wind.

Years ago I had a Blue Hole Prowler which I foolishly sold. Maybe 8 years ago I bought a 16’ Buffalo canoe to replace it. At the time my research suggested that it was popped out of that same mold. Buffalo is now producing these things in T-Formex. Am I correct that this is the latest in the history of the OCA/OCV?

The T-Formex Buffalo canoes are very similar but I do not believe the hull is identical to that of the Blue Hole OCA. I could be wrong.

My memory is not what it was, but I think I recall talking to the people who build the Buffalo in Arkansas when I bought the one I have and hearing that it was the old Blue Hole. At any rate I did just shoot them an email asking about the provenance of their current offering. If I hear back I will post here.

I got a reply from Gary Gordon, a spokesman for Buffalo Canoes. He says the Buffalo 16 is the OCA and that it is made on the original mold from Blue Hole. That is quite a run for that mold. It is currently made with T-Formex for which they claim better flotation and improved durability.

I do a twenty minute paddle, on a pond behind my house, almost every day in mine. And then I transport it once in a while if I am going on boney water. I think of it as a Chevrolet, it is not flashy but it gets the job done.

Since this post might attract Blue Hole fans. I figured I’d post an FB screenshot of what looks to be an OCA for sale in Harrisonburg VA. Geographically this is pretty close to where they where being made in the mid-90’s early 2000’s and the price is right at $150.