This 6’8”, 290 pound fellow recently captured his “white whale” . . . a Necky Pinta (2000). During a deep restoration (it was in pretty bad shape), I tried to remove the bow eyestrap. One machine bolt was coming out fine, which led me to think there was a set block or something similar beneath, but then just started spinning halfway out. Now the first bolt won’t tighten back up, while other bolt won’t turn. Sigh. When I check out the inside of the bow from the hatch, there looks to be two globs of MarineTex around whatever is holding the bolts in.

Anyone have any insights as to what exactly is up there or solved this challenge before with other similar models? I know that later models and years have a horizontal hole all the way through the front of the bow for the carry handle, but that alternative makes me shudder a bit. I might just dremel through both bolts, patch, and call it a day, but a secure bow handle would be nice, if not for carrying then at least for roof transport. Appreciate any wisdom. 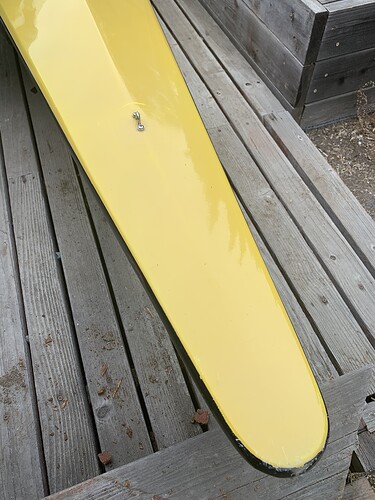 I just took a look at my Arluk 1.9. Same situation as what you described, but in addition to the two globs of something like Marine-tex, there is a 2" wide strip of what looks like black vinyl tape under the Marine-tex.

Looks like a bear of a job due to accessibility. The only thing I can think of is to drill out the screws. For the one that is loose. you may have to cut off the head and use a punch. Then try to chisel off the Marine-tex if it will come loose, or use something like a Dremel tool fastened to a stick and grind it off or at least flat. Fabricate a stainless backing plate and tape two stainless nylon insert lock nuts to it. With the boat upside down, take the backing plate and nut assembly and tape it to a stick and slide it into position. Have a second person start new machine screws on the nuts. Then take a wrench on a stick and have the second person tighten the screws while you hold the nuts in position .

My guess is that there are nuts and washers under the Marine-tex and they applied the Marine-tex to keep them from coming loose. When you were taking the first screw out it probably jammed and the nut began to turn.

While I topped all of my through deck fasteners with acorn nuts and tightened them after I tore a drybag on one, I never touched the front toggle fasteners. Now I know better.

I’d probably cut it off, punch it through and start fresh.

I like this suggestion, but would suggest threading the holes in the SS backing plate rather than trying to deal with separate nuts. I do like nylon lock nuts, but would probably opt to use loctite on the screws directly into a plate with threaded holes.

The backing plate will need to be pretty thick to have threading be effective.

The backing plate will need to be pretty thick to have threading be effective.

That’s a good point. I’m not familiar with rivnuts, but after looking them up they look pretty useful.

Another option is to fabricate a backing plate with machine screws threaded up through the plate to protrude through the hull from the inside. Use nylon acorn nuts topside to hold the fitting. The plate acts mainly as a washer for the machine screws - the threads in the plate hold the screws in place for installation and wouldn’t carry the load, so thickness is less important.

I was also thinking rivnuts for the new install. They are available in stainless as well.

Great suggestions and many thanks. You are a helpful crowd for my first posting. Now I just need to make the time to get back to this work!

I like the plate/rivnut solution . . . I wasn’t familiar with the latter. I think the surface is flat around the eyestrap, so that would allow a simple flat plate to distributed force. Hopefully, the current hardware is what is holding the MarineTex onto the hull . . . last thing I want to do is damage the interior fiberglass in that hard to reach area!

My enthusiasm to refinish every cm from bow to stern clearly got the best of me . . . Next time I’ll work around anything that doesn’t have a simple washer/nut on the inside. Glad I could serve as a cautionary tale for other folks!

Rivnuts require a serious and expensive rivet setter to work with stainless rivnuts. They have an unfortunate propensity to strip out if they are not designed to work with stainless, especially for the 10-32 machine screws present. Aluminum or steel rivnuts, which are more common, are a poor choice if dealing with salt water or dissimilar metals…

If using rivnuts you will still need a backing plate. The toggle eye U-bolt is too short and the threaded ends are too close together to use fender washers to back it up. The toggle U-bolt will have to be replaced if the Marine-tex is still present, unless the U-bolt is replaced with a longer U-bolt toggle fastener, as it will not protrude through the existing Marine-tex.

Threading the backing plate is an option. but as noted you would need a thicker backing plate. Threading stainless usually requires a tap designed for stainless. Locking the machine screw is probably not an issue. A sealant or O-ring will be sufficient and in the rare event that the screws become loose, they would be easy to retighten.

With my boat and the presence of some sort of tape below the Marine-tex, it should be somewhat easy to remove the Marine-tex without damaging the hull.

Might be easier to go with plain old blind rivets. The 1/4 inch rivets have around 500 lb strength. I’ve seen them in stainless. The tool is like $20 at Harbor Freight.

Easiest way to do with the backing plate is glue it in and then drill, but watch out the heat doesn’t degrade the hull.

Knowing the distance between the holes, it would be better to pre-drill or drill and tap the backing plate. You need to use low speed and high pressure to drill stainless and preferably a cobalt alloy bit. I’m not sure that glue would handle the pressure. In addition I’m not sure that getting lubricating oil in the fiberglass or Kevlar fabric wound be a good idea.

If you are planning to reuse the existing eye, it uses 10-32 pan head machine screws and the holes in the eye are too small to drill out for ¼" screws.

That is also way, way more rivet than is needed for this