I’ve been traveling for the last two weeks. We went to see my son and his family in Bentonville, Arkansas. We drove there from NJ because we had to bring a bulky item to them. On the way back, my wife asked me if we could go to a Quilt shop in Cortland Ohio. Of course I said yes. While she was in the quilt shop, I went to a nearby lake, Mosquito lake. When I got there I came across a large group of paddlers, all of them in small kayaks. They told me that they had come from across the lake and we’re now going to paddle across the two mile wide lake. The wind was blowing hard and they would have to paddle into the wind. Going to be a long day for these boys and men 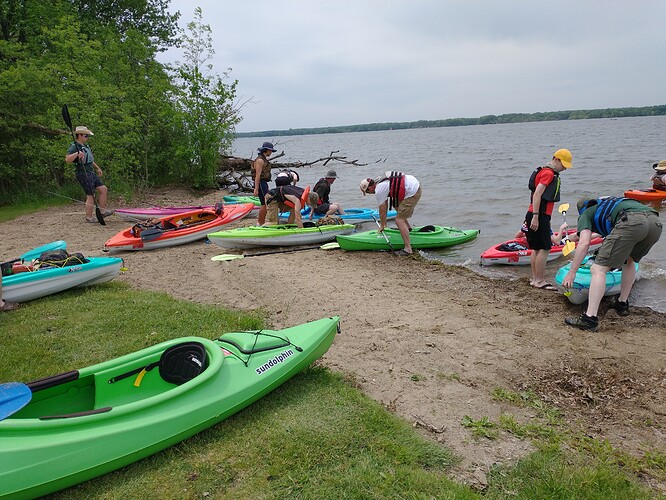 Two miles into the wind with cockpits that look like bathtubs. Rough day for sure!

Any distance in a base model Sun Dolphin is a long way.

Glad they are wearing PFD.

I showed the guy I was talking to a photo of my Artisan, he said “holy shit that’s a long kayak”.

Ya gotta give the leaders props for getting them out. Volunteering isnt cheap, easy, or gratifying. At least immediately.

I’ve got 4 Eagles pushing 50 from when I was a Scoutmaster. We had a lot of fun in those years. The only trips I missed were Philmont and BWCA but they were 17-18 by then.

I bet they all made it.

I live in Cleveland and paddle that Reservoir occasionally. You must have been on I80… I was out this weekend and was amased how many sold out(last year) Walmart yaks were being used

You drove right past some great Ozark Rivers and didn’t stop to paddle?

Didn’t have a boat with me. Did flyfish on the Buffalo river last year.

Was Boy Scout troop “volunteer instructor” for about 3 years. Some fathers wanted me to replace do nothing scoutmaster.
Nah! I ain’t going there, but I would teach them some outdoor skills.
First meeting I attend consisted of about 16 “wanna be” scouts: totally out of control/ bored/spoiled rotten kids in attendance. All the adults had their eyes on their watches, and a please God, let this be over quickly look on their faces.

I love a challenge…Basically I just treated them like mini recruits in one of my Army Basic Training platoons (I’m an ex Army Drill Instructor).

First meeting I had with them it was snowing like crazy. 5 or 6 of those who could not follow simple directions, or control their behavior got kicked out of the building where meetings were held, and out into the cold, cruel world of about a foot of snow.
They were out there the remainder of the meeting.

The Scoutmaster and a few dads had that, “Can he do that”? look on their faces. I had that “adapt or hit the highway look on my face”. Play time is over! The next meeting we had you could have heard a pin drop when I started talking.
Now we could start teaching something.
Scoutmaster and dads are all smiles…where the hell did this guy come from???

To make a longer story short…

We backpacked, canoed, rock climbed, rappeled, caved, hiked, did community projects, and all scouts were required to pass Basic First Aid, CPR, Tandem canoeing, Basic Water Safety, and Orienteering classes. Outings were conducted year round. They prepared their own food, set up their own camps, and were assigned to small food groups. Each small group was supervised by a staff member. Staff members had their own food group.
The did not prep food for the scouts.

No one was ever seriously injured; no one was ever evacuated off an outing. Soon, the scouts started confronting the grab ass; recognizing it as a waste of their own time, and it brought down natural consequences on those who tested limits.

Examples: Test limits on the river; lose swim time.
Wrestle or aggravate other in your tent; you end up setting up, and sleeping in a rainfly by yourself.

The grand finale was a 14 day expedition at Philmont. After our first night out, our “guide” left us on our own. He stated, “you don’t need me”!
Most of the the original “grab ass boys” were there; 4 of them made Eagle Scout. Most all of them are married with kids, and successful as far as I am able to asertain. I still see a few of them on occasion, and a lot of “do you remember this or that Bob” comes up in the conversation.

It was fun, but not enough fun to start with a new group, who equated scouting to playing “grab ass”!

We had sort of separate duties. Dan, the primary SM handled the discipline problems. I never met a man who could lead young men like Dan could. He was an Eagle who had a busted wing from Vietnam.
The troop we inherited were a bunch of fools, as teenagers can be given the chance. Within a month they were either gone or with the program.
I was the outdoor SM. Planned the trips and they weren’t to city parks. Our philosophy was " An outing planned is never cancelled". Our first it rained 4" that night. Had kids stacked in my covered truck bed 2 deep. We camped in swamps, on the beach, in the mountains through freeze and snow , through tornado warnings, and mud.
Almost every time we had a tough weekend, a new kid or two would sign up. Only had a couple of small injuries in 8 years.
I didn’t make the big trips because work was wide open most of the time.
I’m glad the boys got to experience those trips.

I was conned into leading a den in cubs and really disliked it. When my son went to scouts, I stepped back, for a bit.
They made the mistake of putting me in charge of the camping merit badge. I have no idea how any of them earned it prior, but they earned it while I was there. (USMC)
They learned about packs, how to pack, how to make fire with fire steel, how to feed themselves without resupply for days and how to poop in the woods. Camped in Aug and Feb (in PA) Every month except for Dec. I semi joked that I wanted to hire them out during droughts because when we camped, it rained. Had an EMT teach first aid. We lost our fundraiser so the fact that we only had enough money to charter ended the car camping stuff and the scoutmaster quit. I became Committee Chair We lost a few scouts and parents. Lost a lot of scouts because it was now hard, lost parents because whenever they would say “You should…” I followed it with “Ok, let me know how you are going to run that next meeting” We built a food trailer. Passed the inspections and had a fundraiser that could run the troop.
Started using the packs. Since we live near a river, borrowed canoes (that is what started me on the whole paddling thing) We were the first troop in our council in 40+ years to make Boys Life with a 107mi self supported canoe/kayak trip in 5 days. One of the funniest stories was at camp a “leader” was touting his troop and that everyone should strive to emulate them because they were true scouts because they had done a 50 mile canoe trip, in 11 days, with support vehicles. One of our kids put his hand up after this went on for a bit, and asked “What did you do after lunch?”

One of the best parts was that if you have ever been to a scout camp to pick up your kid, it looks like a yard sale. When I first started with the troop, our guys did to. The last time I picked my kid up, the place looked like a yard sale, except for our troop. They had their trash packed in their packs and they were all set around the same tree near the parking lot when we pulled in. That told me I did something good.

there is a fine line between challenging young people and putting them in danger.

I had a pack of cub scouts many years ago and living close to Lake Erie we would hike to the beach about a quarter mile from my house and explore the beach for a few hours hiking a ways up the beach. We would gather fire wood and I would show them how to get a small fire going and each boy could cook a hot dog for lunch. We would stop at the creek and look at the fish and hike home for their parents to pick them up.

These boys are now 45 years old and they still recognize me when we run into them and to be honest they are a lot different looking now. But every time they mention doing those hikes and how much they remember the fun.

At the time I sometimes felt I was just a babysitter but that wasn’t the case.

If there is no risk, there is no challenge. So far what I have seen is adults giving kids the opportunity to take the bubble wrap off and learn that they can do more.

There can be plenty of challenge for kids without much risk.
Same with adults.