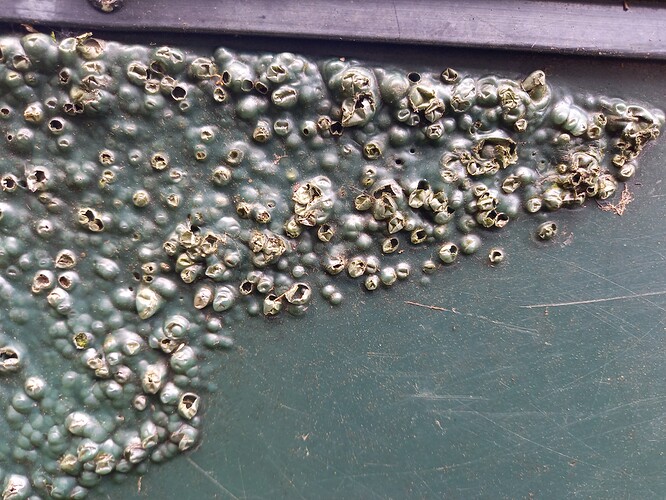 Can you tell us a little about how it got there if you know?

Something is amiss here. I have never seen anything like it.
Poly is not so easy to fix like fiberglass and kevlar.
I would pass on it.

Thank you. We were looking at it to buy second hand. A few people told us to avoid, so we have passed on it.

I have not seen anything quite like this either. I am assuming this is a three-layer, roto-molded polyethylene canoe.

I think you would need to grind/sand off the blisters which might possibly take you into the central foam core. Polyethylene boats can be repaired using West System’s G Flex epoxy and I have done repairs to several using it, including one Old Town three-layer poly canoe.

But to get a good bond you must pre-treat the surface of the hull with flame oxidation just before applying the epoxy. This is not difficult but requires the use of an inexpensive, hand-held propane torch. If necessary with appropriate pre-treatment you can successfully bond fabric to PE using G Flex.

We are seeing a very small area and it is very odd it stops just short of the gunwale. If the damage was just over a small area and the price was right and the rest of the canoe was good I would buy it and just live with it or just grind off the high spots and skim it with epoxy per above. Then put a bumper sticker over it.

If it is over a wide area then run away.

It looks like some out gassing in the process but if that was the case it wouldn’t have left the factory. Maybe someone put heat to the spot unintentionally like sitting it close to a space heater.

The foam center is 90% air trapped in a matrix when it gets hot it expands and has to go someplace. The gunwale was sinking heat and or blocking heat the outer poly was mostly a liquid and the out gassing had a place to go.

Up there I doubt a small area would have a great structural impact. It looks awful though and may be a reason to get a great deal.

The gunwales are not in place when the canoe is roto-molded and not attached until after the molded hull has cooled.

Oh I didn’t think it happened at Old Town. They would have never left that out the door. I think it happened in someone’s garage in the winter when they had an electric space heater sitting next to it and it got turned somehow and cooked that spot. The gunwales were on at that time.

Yes, I am inclined to believe that never happened during production. I am no roto-molding expert but from the little I know about the process I believe it to be very consistent and fully automated.

An external heat source is possible. I was thinking that the hull was damaged as a result of some type of chemical substance or solvent that partially dissolved the PE, although polyethylene is quite resistant to most solvents and chemicals, at least at room temperatures.

Yes a heater is the most likely. A campfire is a possibility. It depends on how drunk the camper was that wanted to use their canoe as a seat. It doesn’t take much imagination to visualize either turn of events.

I thought about that also but the area is really defined and nothing like running down would cause and nothing up under the gunwale. It is like that was blocking the heat and with IR that’s just how it would be. It would take a lot to do that to the poly with a chemical and then not have it dripping and running.

“although polyethylene is quite resistant to most solvents and chemicals, at least at room temperatures”

That thought is what had me thinking heat and expanding air. It sure had the bubble and burst look frozen in place.

So would it be best to leave the bubbles, but use the propane torch to soften the poly. Perhaps use a fork to pop the bubbles. Maybe a metal putty knife to flatten the poly. Have the G-flex ready to go. Have some cling warp ready to cover it all when done, and masking tape to keep the cling warp flat.

Two things will cause that that I know of. One is high heat, being too close to a fire or something, the other is a petroleum base solvent or chemical. Left an old can of bug spray sitting on my boat one day unaware it was leaking and the resulting dribble coming from the can caused my outer vinyl to bubble up like that. I would just sand it smooth , patch and paint it.