I’m planning to do some kayaking the Buffalo River next Tues. Weather suggests air high temp at noon to be around 65-70. Do I need a wetsuit in this temperature?

I’m planning to do just some class I-II portions. A few options I found on AW are: Ponca to Kyles, Kyles to Pruit, Pruit to Hasty, Woolum to Tyler, Tyler Bend to Gilbert. Are any of these portions runnable this time of the year? If not, what other portions or areas with class I-II do you suggest?

Check out the USGS site for stream flow volumes and water temperatures. The only temperature gage is near Boxley which is upstream from Ponca.

It shows the water temperature to be in the mid 40s. You need protection, how much I will defer to others that have cold water experience.

The stream flow gages are here:

How much water flow is needed for a successful trip will need to be answered by folks with experience on that river.

I’d try giving the Buffalo Outdoor Center (BOC) at Ponca a call shortly before your dparture. They usually judge the river by the height at the bridge at Ponca rather than USGS gage heights, but their experience is great and they can be counted on to give good advice - if any one is there this late in the slow season.
Probably best not to go above Ponca (Boxley/Hailstone) unless with an experienced group, especially in cold water conditions. As far as I know below Ozark is nearly always passable, perhaps with the occasional short carry or drag. IMHO, better to stay off if the water’s high - over about 5’. It drops fast following a storm, though.
I’d want a dry suit to be on the safe side.
Pblanc or Bob know the river much better - perhaps they’ll jump in.

Water temperature is the most important number.
I used to raft our local rivers starting in the spring in late March, April and May.
Spring snow melt was really cold in the low 40s. We had many swims in those conditions, most people had full wet suits and did fine. Some had dry suits.

If the Buffalo R is in the 40s there is no question that you need to dress for immersion. If the weather is warm and the river is at low flows, you could probably get by with a shorty or farmer john.

One of the first things you need to do if you are serious about becoming a competent whitewater paddler is to become familiar with the on-line resources for assessing water levels in real time. You have a great advantage in that regard compared to when I started out paddling. Back then there was no internet and water levels often had to be ascertained by calling the TVA or some other agency, and listening to a long list of water levels for many different rivers and much of that info was many hours out of date. Or calling a “talking gauge” that reported stage in feet and inches through a series of beeps and you needed to know the “code” to make any sense out of them. Or by calling a friend who lived near the stream and asking them to go look. Or by driving hours to go look yourself, only to find the river was too high or too low.

While there are many streams that still have no USGS gauges reporting to internet web pages, many do including most of the popular ones. On the Buffalo National River there are six USGS gauges. One reports in stage (feet) only. The others report both stage and discharge (cfs). CFS is flow rate past the gauge in cubic feet of water per second and you need to develop a visual sense of what different volumes of discharge in cfs mean for streambeds of various capacities.

Here are a couple of convenient websites to get a quick visual sense of what all of the gauges on the Buffalo are reporting at the present time.

Stay informed about the water levels in our rivers.

The graphs of stage and discharge over time give you a much better appreciation of how the water level is changing over time. The rate of rise is particularly important when the water is coming up. The rate of fall is important if you are planning on a trip on that stretch sometime in the near future. Also note that the gauges typically report only once per hour and the updated information usually does not appear on the web page for another 15 minutes, so the last reported values that appear can be as much as 1 and 1/4 hour old. That is of particular consequence if the river is rising rapidly.

Now to answer your questions specifically I do not know of anything that would rate above Class I on the Buffalo anywhere downstream of Kyles or maybe Erbie at any level at which the upper Buffalo is normally run. There are Class IIIs on the “Hailstone” section above Boxley, which rarely has enough water to run, and when it does usually only holds for a day or two. There is also Class II-III action in the Boxley Valley between Boxley and Ponca. There are a couple of rapids between Ponca and Kyles in the Class I-II range, the difficulty of which vary greatly with water level. Below that everything is pretty much Class I unless the water is very high.

If you checked out that gauge information you will see that Ponca is already “very low”. The stretch from Pruitt to Carver might be doable right now but the levels are dropping and unless there is more rain between now and next Tuesday it probably won’t be by then. And you wouldn’t find anything more than Class I on it even if it were.

I concur with what pblanc and pjc have stated; can’t disagree with anything they’ve written.

Personally, I believe that the Buffalo is going to be “water poor” for the coming holidays.
Doing any of the river above Ponca, will likely be a very poor decision; especially the Hailstone section. You get up there, and get into trouble; don’t expect help to be available. Poor chance of seeing any Ranger, and few if any other paddlers.

The “I’m planning to do some” statement sounds as if you might be soloing? Bad idea in my opinion’ no matter what the water level is.
Dress for immersion in cold water; not for air temp.
I’d seek another paddling venue.

If Ponca is “very low”, Pruitt to Carver will be tight as well. We did Ponca to Carver last May and the gauge was at 2.6ft at Ponca when we started and dropping. Today, its at 2.5 and it has not rained lately, so its going to drop more. It was slow going down to about midway between Pruitt and Hasty. We camped across the river from Hemmed in Hollow the first night and in between Erbie and Ozark the second and between Pruitt and Hasty the third. That’s about 8-10 miles a day with camping gear it was a challenge getting that much. Narrow channels, lots of strainers and more than a few spots where we had to drag.
Were it me, I would look downriver. Maybe Bakers to Gilbert or Tyler Bend to Maumee or Dillards for water by next Tuesday.

My experience has been that the stretch from Ozark or Pruitt to at least Hasty can at times still be paddled even when Ponca has dropped to too low. I have paddled from Ozark to Hasty at the present level with some occasional scraping. But there is a limit, of course especially for loaded boats. I would not count on that stretch remaining high enough for a tolerable paddle in even unloaded boats by next Tuesday.

But I agree that if I were committed to paddling the Buffalo early next week I would not plan to put in above Bakers unless there happens to be a significant amount of rainfall between now and then.

I have too or I would not have tried it last May with a big group, but the folks at Lost Valley told me after the fact that at that time the river was seemingly lower than the gauges and conventional wisdom would usually dictate. Today, Ponca is at 2.12’ and Pruitt is at 4.02’ but there is only about a 20 cfs differential between the two. When I was there in May, Ponca was about the same, but Pruitt was only like 3’. May have just been fluke.

Right now the Buffalo is at 2.13’ and 57.4 cfs on the Ponca gauge and 4.01’ and 90.7 cfs on the Pruitt gauge. Both levels are too low in my opinion to have an enjoyable paddle putting in at either access. But the difference is that 57.4 cfs is way too low to put in at Ponca while 90.7 cfs, which is more than half again as much flow (58% more) than at Ponca would probably allow you to scrape down to Hasty if you were so inclined, but I wouldn’t want to try it in a loaded boat. I would consider 100 cfs to be an absolute minimum flow level for both stretches but personally I wouldn’t care to do either with less than 150 cfs even in an unloaded boat.

I would consider 2.4-2.5 feet on the Ponca gauge to be an absolute minimum for that stretch although I have heard of people attempting it as low as 2.0 feet. I’m glad I wasn’t with them.

Water levels on the Buffalo at Ponca in May are highly variable. The graph below shows the discharge on the Ponca gauge for this past May. Flow ranged from 70 cfs to 1700 cfs and some years the range is significantly greater. The little red triangles show the median flow levels for that particular day over the last 13 years so half those years the flow was less than that indicated by the triangle and half greater. There is often enough water to put in at Ponca in May most years, but it is never a given and there is sometimes too much. 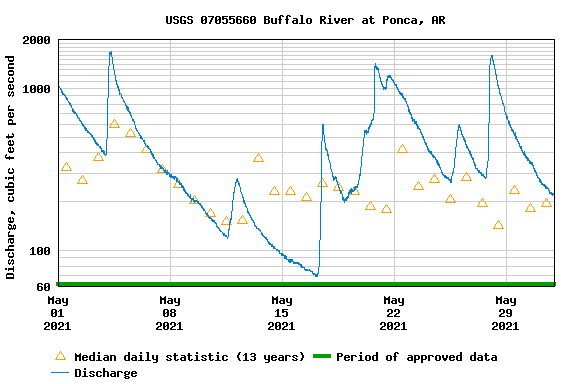 It’s a fairly classic misconception to think that warmer air temperature is a factor when paddling on cold water. If you’re doing New York rivers in December, you should be intimately familiar with cold water safety and the gear you need to paddle in those extreme conditions. Even if the air temperature is in the 80"s, an unprotected immersion at those water temps is extraordinarily dangerous and immediately life-threatening due to cold shock. I invite you to visit the National Center for Cold Water Safety’s website: www.coldwatersafety.org. Also, read this [article].(Cold Water Paddling Gear - Google Docs). And watch this video. And this video too.
Paddle safely and have fun.