Busted On My Way To Park N' Play 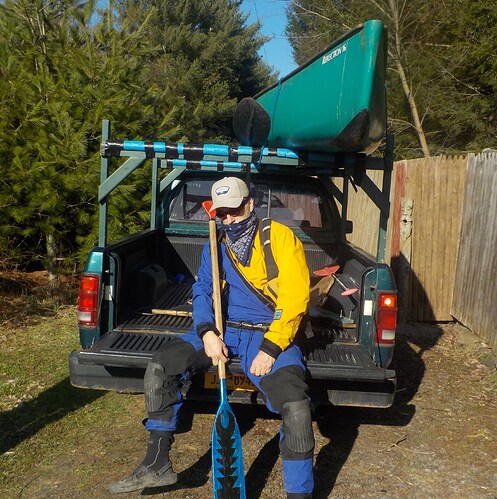 Well it was a nice thought and a simple plan
A bright sunny Monday, just the ticket to break me out of the Corona-lock down funk: So I throw the canoe on the truck and head for that ideal spot I haven’t even told my closest paddling pards about. The out-of-the-way fisherman’s access where the little river opens up like a lake for a bit. I could do some canoe sailing there–But hey, it also provides a nice little rapid set to practice skills in, not to mention nearby shallows to get in a little poling. On a “normal” weekday in a “normal” time there’s usually not another soul for miles. Maybe a trout fisherman or two. When I rounded the park and got on the back dirt road to the launch site–Who do I find waiting there? A New York State Trooper parked in a cruiser. Oh no, this can’t mean??? Yep. No paddle-play today. I was shocked…This was not some highly traffic’d country town/city park. The Officer Lady was very courteous and frank. “The town don’t want anybody here.” (Was she kidding? Nope. I mean usually there’s not many people EVER here.)These are strange days indeed. I turned around deflated and headed home. (But I may try another location very early tomorrow;-)

Was it a village or town owned park? Curious because I checked and NY parks are open to the public.

I guess I should be thankful that Michigan specifically allows paddling for recreation, not that rec boat paddlers are out since most inland lakes are still frozen.

-Village. But that turned out to be irrelevant, because here was the real deal which I didn’t find out until I left and went on-line:
I said to the Officer, “This is a DEC public fishing access…What’s going on?” She said it had to do with events over at the Kaaterskill Falls. I said, “But those trails are almost 20 miles from here.” Didn’t matter. She was posted there and was told to turn any one away. On the way out, I did see a nearby playground, basketball courts and exercise station-area cordoned off with caution tape. (Nobody really uses them much regularly anyway.). Bottom line, I attribute the whole thing being something of an over reaction and connected to this story:

State closes Kaaterskill Falls and nearby trails in Greene County due to...

HUNTER, N.Y. — The state Department of Environmental Conservation has temporarily closed Kaaterskill Falls, the viewing platform and connecting trails in this Greene County town due to the coronavirus outbreak.

Sounds similar to the Michigan DNR shutting down the Tippy Dam Recreation Area because of overcrowding by people from all over the state.

Too many folks don’t have the self-discipline to follow the physical-distance guidelines.

Twenty years ago the state built a bike path along my home river the Blackstone. They put in parking lots and improved river access - it is great. But now it is a state park and the state has closed all parks and beaches. I took ride last night to see if the parking lots along the bike path were closed, and to my surprise they weren’t. Lots of cars, lots of people walking on the bike path - they will get around to it eventually. There are a couple of local spots that I can go to that don’t involve parking at the bike path, but I am going to get sick of those pretty quick.

NY parks are being shut down where they tend to encourage congregation, the Katterskill Falls part is likely because of the viewing area. I haven’t tried but would not be surprised to see the resident ranger patrolling a couple of spots in a nearby state park, where anyone who paddles knows of the free put in. This morning’s check of the web site says they are open, but all it’ll take is a gathering of fools for a picnic to change that.

Some town parks around here handled it by banning parking inside the park, and they are enforcing no parking reg’s on adjoining streets. So there are ways to walk there but it’ll be more like a 4 plus mile loop to do it rather than the usual mile or two.

FWIW, I am guessing that NY will be past the top of it about when Cuomo says. I checked county by county yesterday, and it is only a couple downstate that are not slowing down. Doesn’t mean a full return but might loosen up some of the restrictions.

Don’t bet on a speedy loosening. That would not be wise. The virus would be back. Sort of like taking some of the course of antibiotics and then cause they are horse pills stopping. The backlash could be tremendous or not. Who knows? We haven’t had deaths in three days and the caseload seems to be leveling off but… who knows the shape of the real curve? It could just be a stall out like pork does on the smoker

OOPs! My post in another thread… does not anticipate what I would call a speedy loosening.
I also said that I expected it to return in further cycles. The whole immunity idea is NOT supported by subsequent testing, 20% about are low level postive after recovery.

The difference between later and now is that the trifecta of presymptomatic transmission, lack of testing and overwhelmed hospital beds is likely to be less so on the second round. Our area is opening up more test sites as soon as they have the test kits and that should gradually improve.

Measures like wearing a face covering and continuation of good sanitary habits should allow some of the most dire measure to be loosened at that point. In fact places that were earlier on the curve are beginning to talk about what is possible. We are seeing that kind of thing be doable in places like Wuhan where they are thru the first round.

The shape of the likely curve can be gauged from NY, NJ and some other states that have hefty case loads and were earlier in the timeline.

Where a state has released the projections for that state, so far the worst sin has been that the maximum limit came out to be too high once the state imposed a statewide lock down. I haven’t found any exceptions from states that have real time in on a shut down, but am happy to get examples of being wrong.

I earlier said I would like to see modeling for Maine, I have to retract this because their CDC just released some modeling results.

Funny that - I stopped at a liquor store on my way home to see if I could get a nice bottle of red wine to go with dinner. I walked in and the clerk said, “Please, just take the money.” I said okay and went home with ten thousand dollars. (Musta been the smell from the dry suit, gonna have to do something about that for next time. 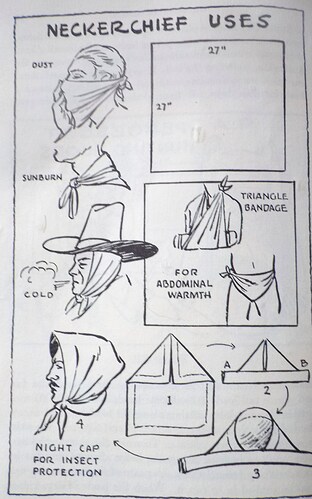 the Katterskill Falls part is likely because of the viewing area.

The viewing area and the trails leading up to the high falls are always a problem, even during regular times people are getting hauled off on stretchers. Kid you not, I’ve seen whole bus loads of Japanese tourists and women wearing high heels trying to make that climb. Years ago, my nephew(a professional climber) and I were about to start a rappel in Platt Clove when we had to stop and go help get a family off the Kaaterskill trails. They were terrified and holding tight to loose saplings.

I am guessing that NY will be past the top of it about when Cuomo says. I checked county by county yesterday, and it is only a couple downstate that are not slowing down. Doesn’t mean a full return but might loosen up some of the restrictions.

I’m going to get around any parking issues today, even if I have to leave the canoe home–More than one way to skin a cat! 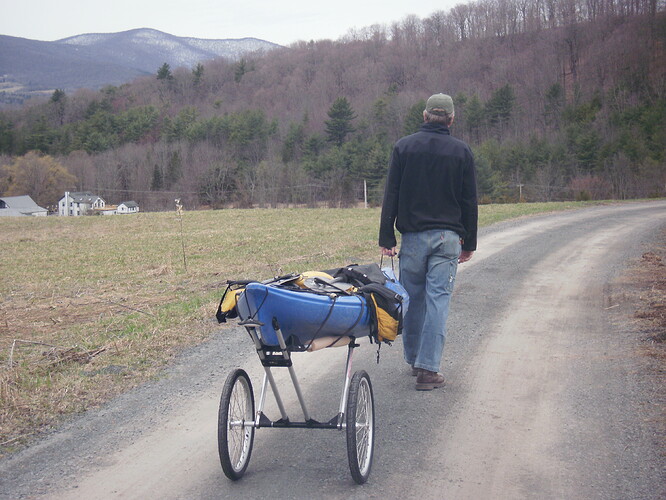 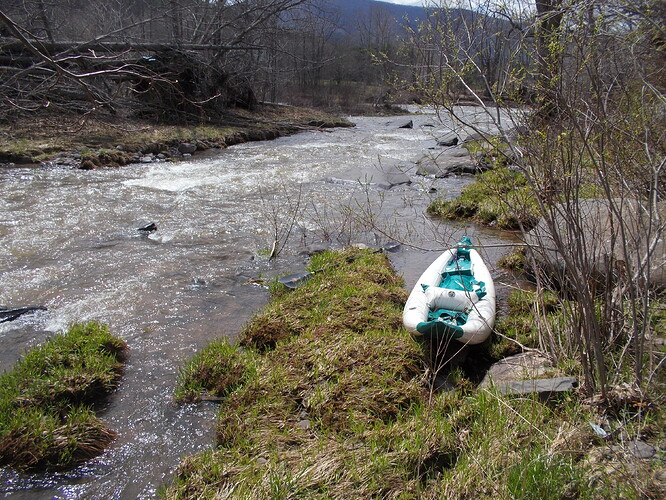 Thanks. I do suffer from optimism, but in my own defense I called this one as the really bad science fiction movie barely a week into reading about it exploding in China. I had a number of people telling me I was being too pessimistic. I replied my spider sense was going off and I have never found it to be wrong even once.

But I am also a fast reactor, and what I am seeing in the details the last few days for NY state is a major improvement over 2 weeks ago. It’ll take time but we will be OK if damaged economically like everyone else. Will just have to wait out the same happening in states around us.

I could get away with what you show even in the city here if I made it a longer walk. But I end up much in the view shed of civilization, and I don’t know if local authorities would feel the need to come and check on me.

More than one whitewater season could be canceled if the attached article holds true. Pessimism walks hand in hand with… 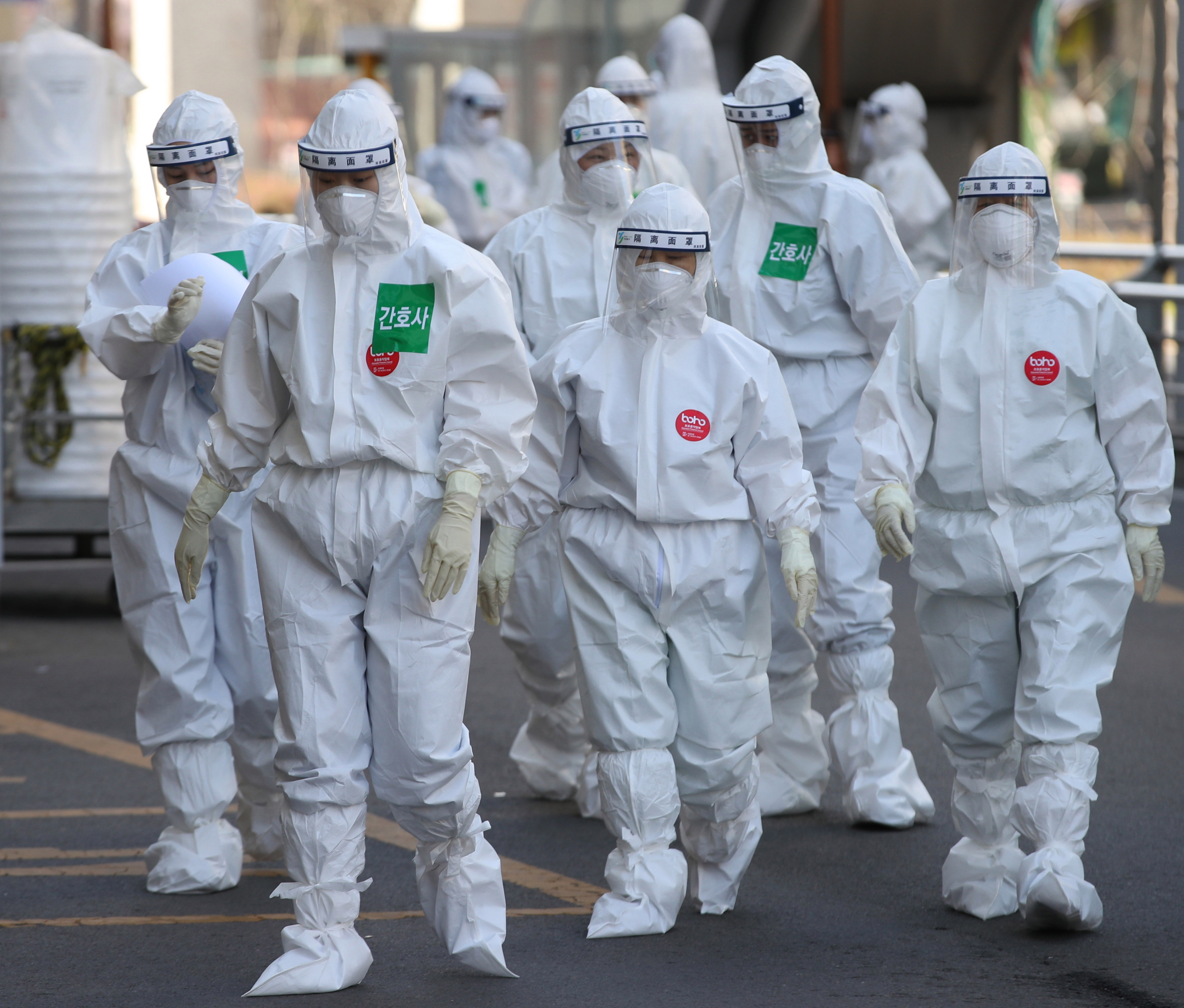 FEARS have been raised that the coronavirus may be able to remain in the body and “reactivate” later after 51 recovered patients tested positive again.   The patients, from the city of …

I assume it can re-emerge, have for a long while because smaller leaks out of China suggested that. Since they have such a long history of transparency - not - if it is even suggested I assume it is so.

I also read some earlier articles saying that it bound to the receptor cells in a way that more closely resembled HIV than SARS, which points to the whole acquired immunity theory being a bust.

That does not mean it is entirely unmanageable if people adhere to social distancing guidelines and other basic good habits. But no contest, people HAVE to all agree to that or we are not going to feel any weight lifted for a long time.

Subsequent add - Cuomo just said in today’s presser that his exec order coming out today will include $1000 fine for violating social distancing rules, and some other things from the last two days. If that is used aggressively I suspect it will improve behavior.

That stream/river looks really nice to me. I’ve also been using the boat cart strategy to get some quality social distancing. 70 degrees today in SW Michigan (pics) and gonna hit only 45 tomorrow. 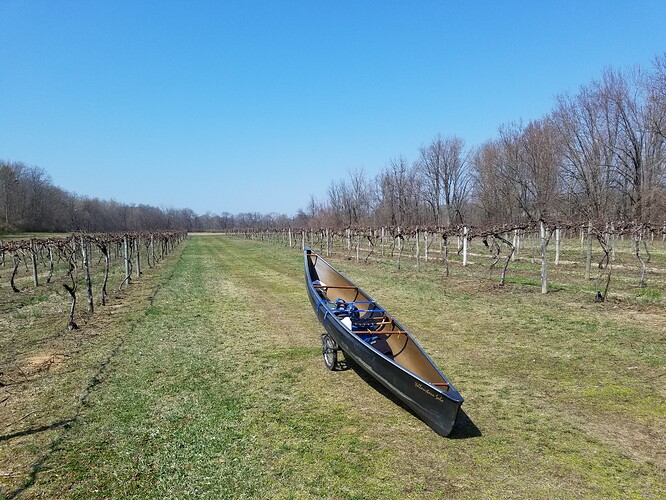 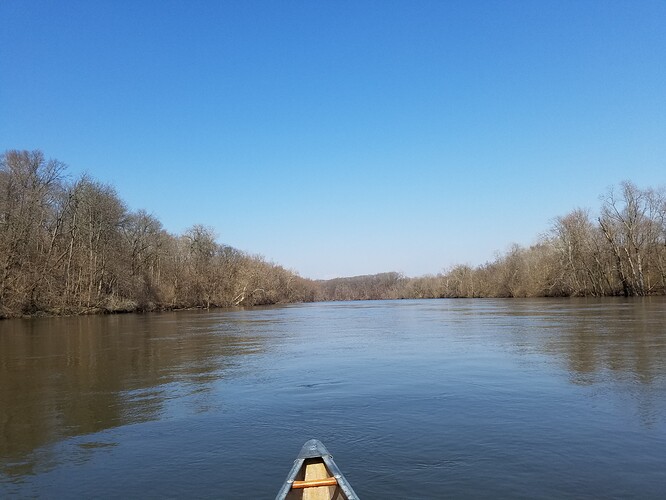 Cart hike through a vineyard? Save a bottle for me!;-