I’m in the market for a used canoe (probably the best used canoe for my budget will be an Old Town in good condition). I have seen some that look nice but the seller says there has been a crack repaired and gives pictures etc. How much of a deal breaker is such a repair? I’m new to the more in-depth aspects of canoeing and don’t want to buy a headache. I know used canoes will not be perfect. But, again, some that have been repaired are very nice models in general, but I want to be smart about it. One I am looking at is a Jensen 18 which is reviewed very well in general. It’s actually in my budget but this specific one has had the hull repaired a few times “but not since 2014 and doesn’t leak a drop”. Any guidance would be greatly appreciated!

Jensen 18 is a great tandem. A composite canoe that has had a small to moderate sized crack repaired might well be good as new (if slightly heavier), but it depends on who did the repair. If you could get and post some pictures you might get more solid advice.

Here is a picture of the Old Town crack repair. The repairs on the Jensen are not specifically photographed but there are some of the hull in general. I will attach those as well. (I apologize, the photos didn’t post in the order I selected them so the two canoes’ photos are mixed together, but they are easily distinguished). Also, the Penobscot 16 in the photographs comes with a small outrigger setup for fishing stability.

Also, I should mention that the purpose of this boat will be family camping/river trips with two adults and one kid who is currently 5 years old. Also will be used for lake fishing, exploring, etc.

Others I’m considering, not shown below, are an Old Town Tripper 172 and an Old Town Discovery 174, each in “good” condition, no repairs stated. 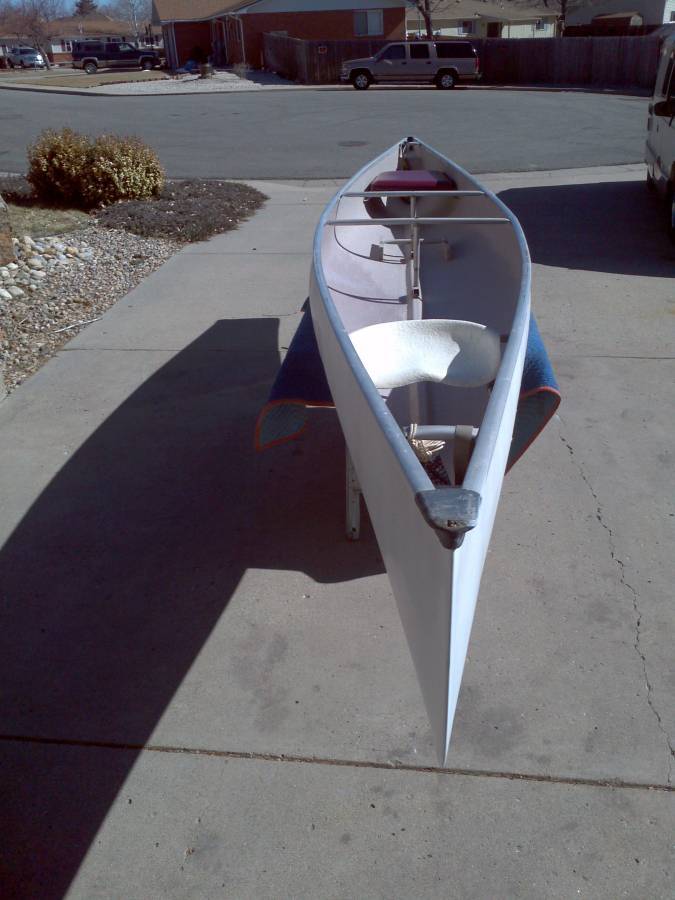 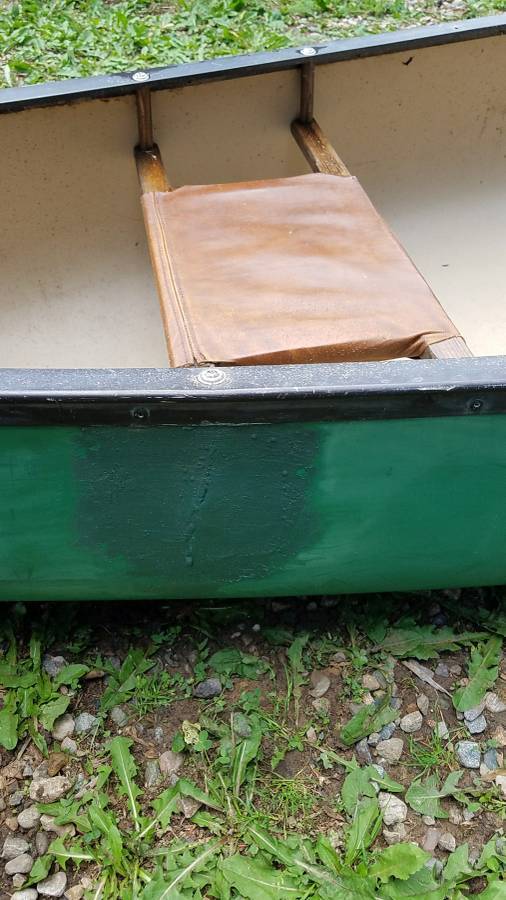 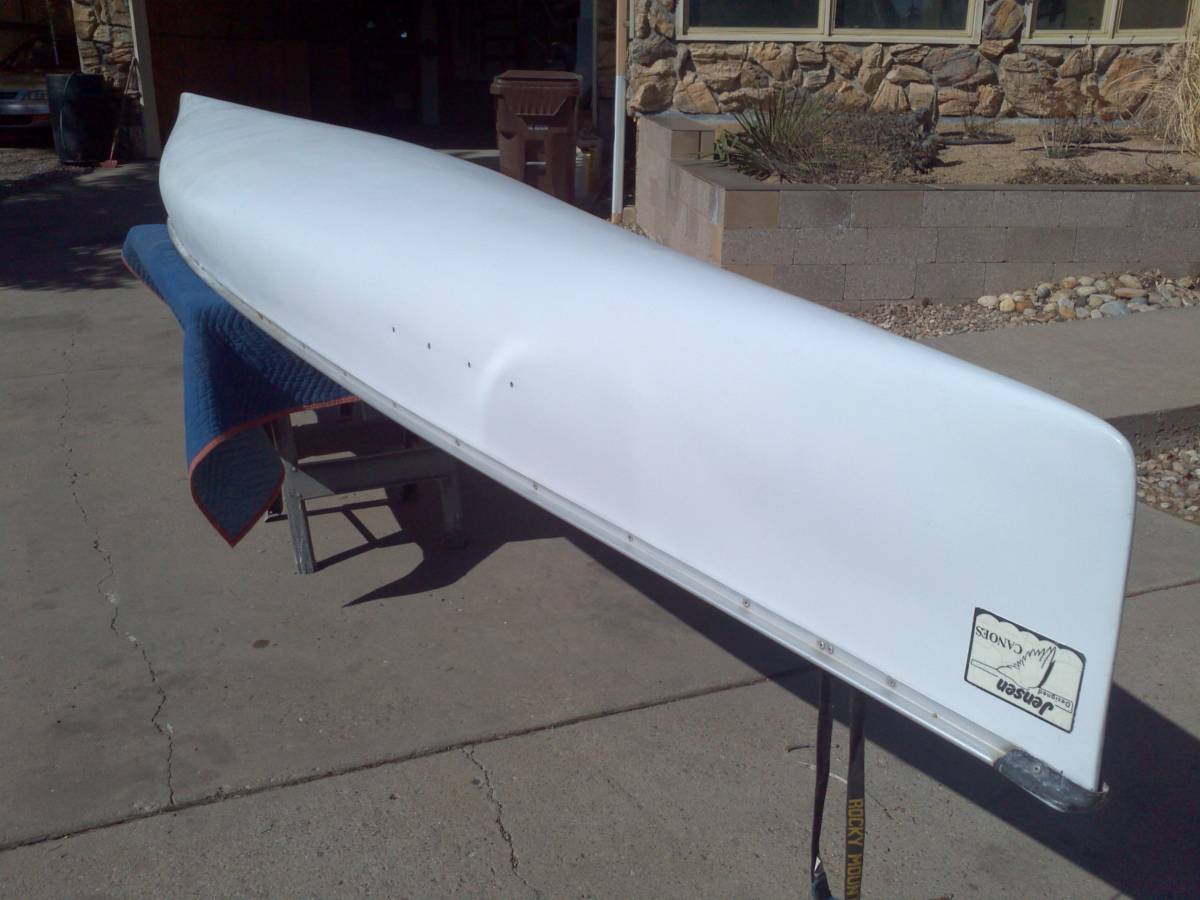 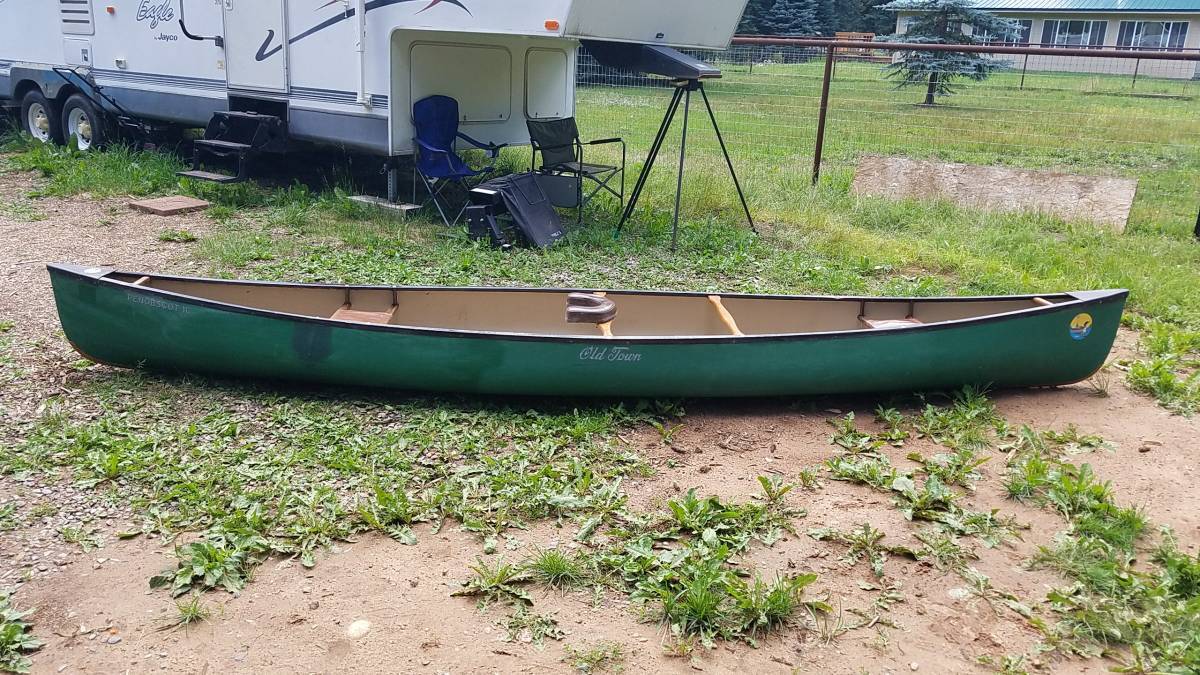 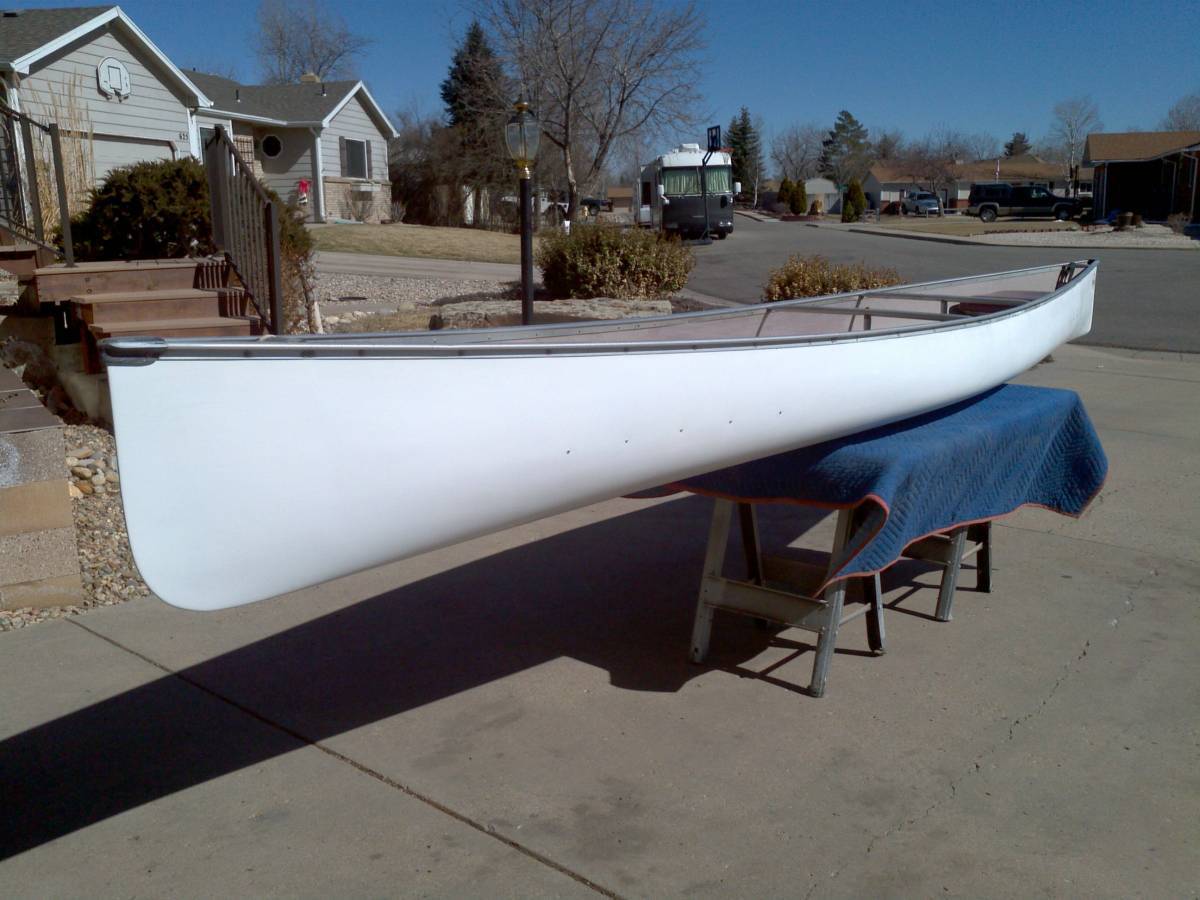 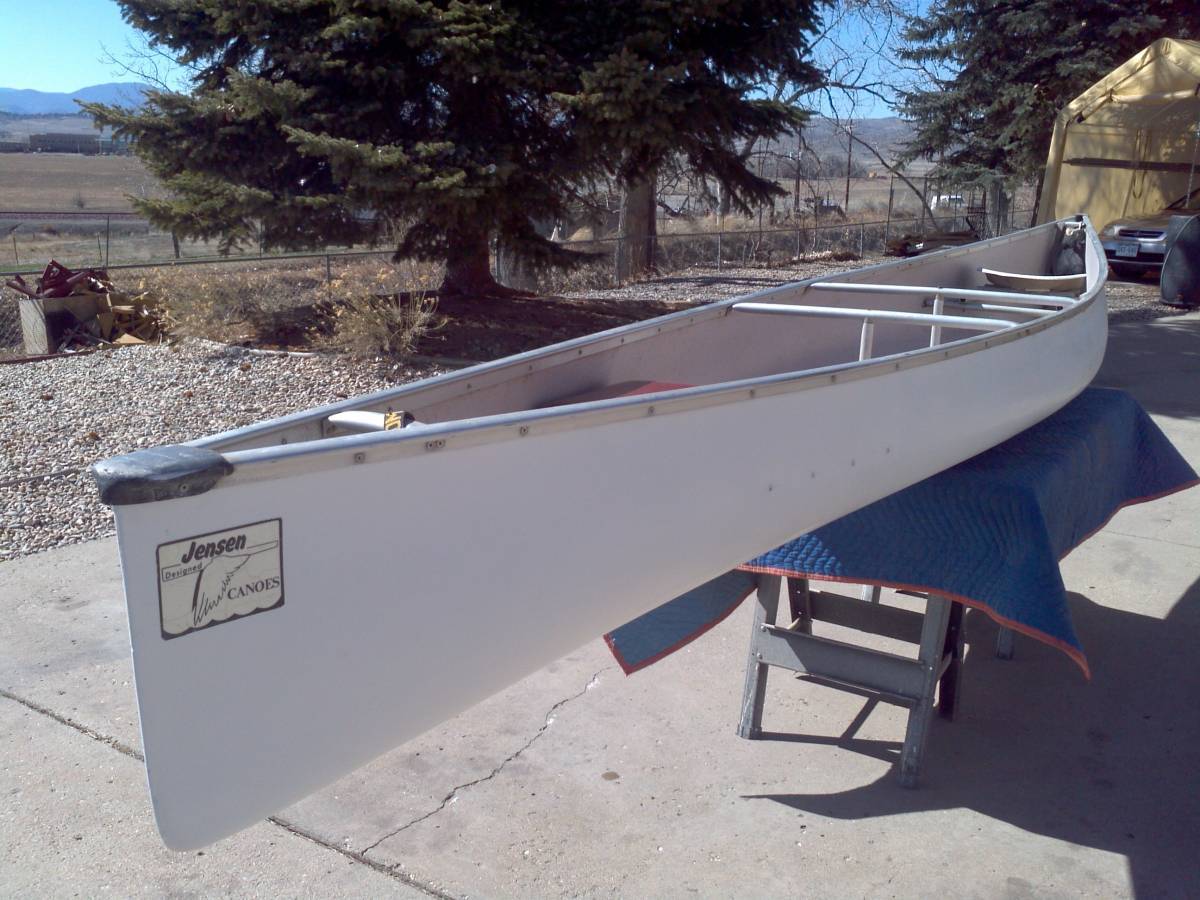 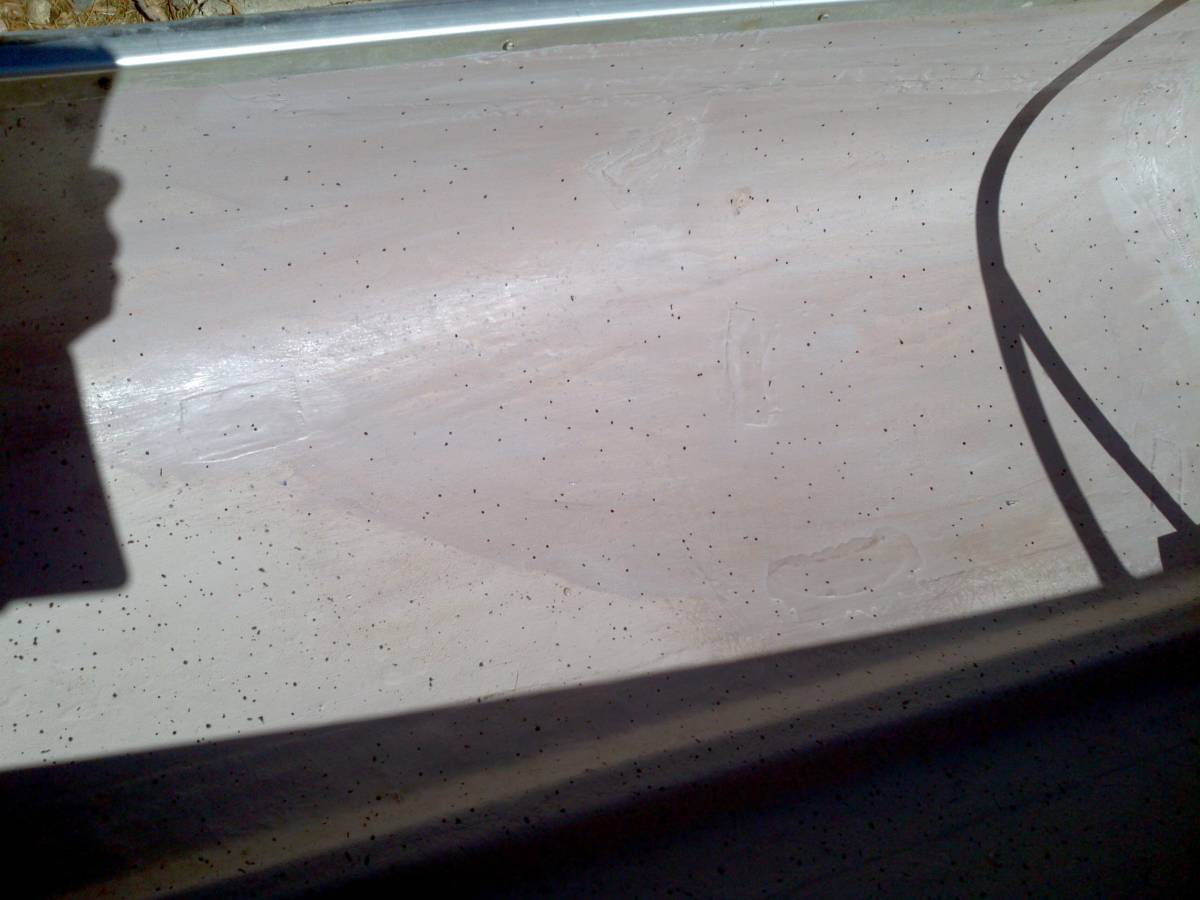 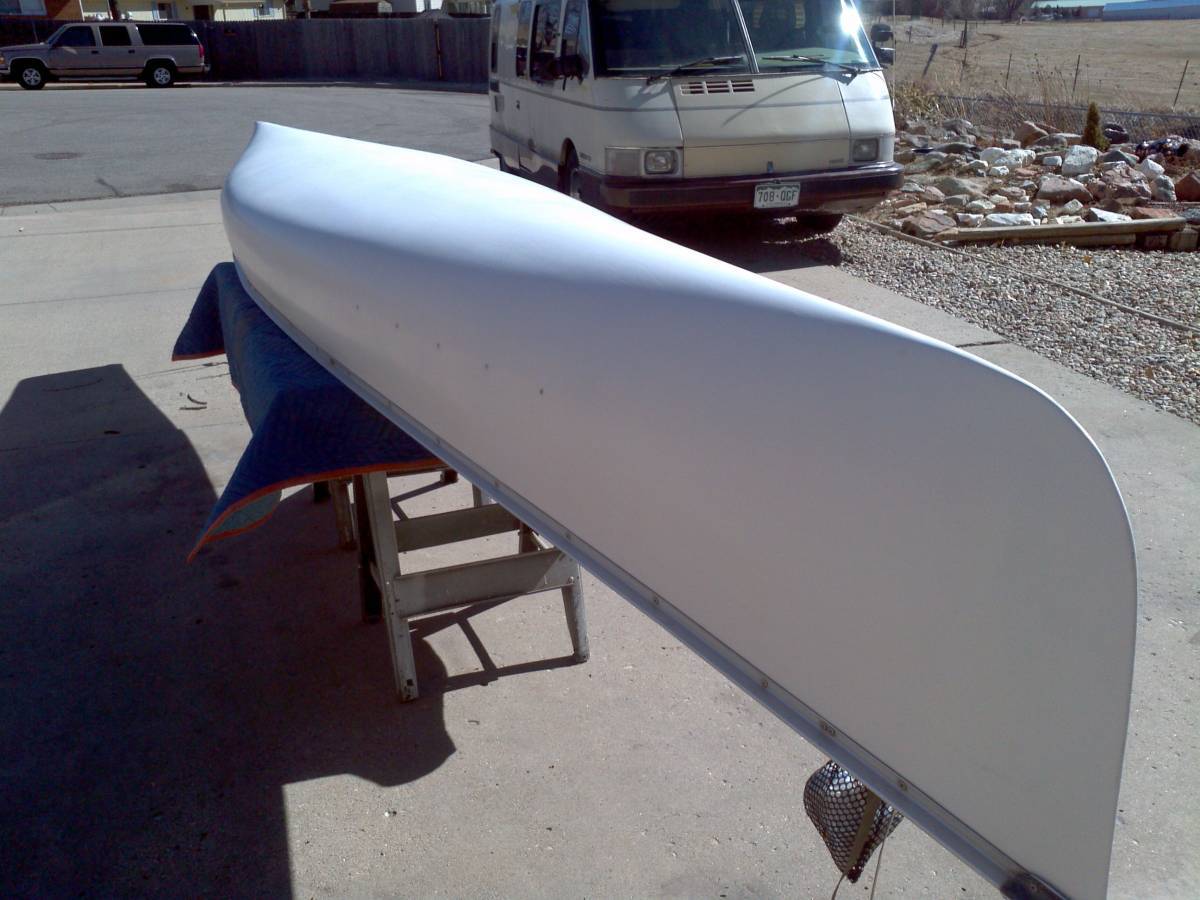 As far as the photos go, I do not see anything on the Jensen 18 that would be a concern. The rear seat is not stock and there are some areas of erosion through the front deck cap but the gunwales and hull look fair and true. That boat is either Tuff-weave (fiberglass/polyester) or fiberglass depending on the date of construction which you could determine if you got the hull identification number (HIN). It show Wenonah’s center rib construction method (which is tough but no longer used). The boat will weigh around 66 lbs.

The Jensen is a very fast hull but not very deep. Not deep is good for not catching a lot of wind but it won’t be as dry in rough water. As long as it is used on protected inland streams and lakes and not overloaded, it should be fine.

If the Old Town is a Penobscot 16 it is a Royalex hull and will weigh around 65 lbs. The Penobscot 16 was a very nice design but a 16’ tandem could be a little tight if carrying two adults, a child, and camping gear. It might work but would depend on the size of the paddlers and the bulk and weight of the gear. I can’t tell what kind of repair was done. It looks as if something was gooped on to an external crack and painted over with spray paint. I would ask the owner if they know what was used. If I was considering buying that boat, I would closely examine the hull interior opposite that area for any sign of weakness or damage and push in on the hull at that point to see if it is soft.

When looking at Old Town Canoes be aware that those models which have three numbers after the model name, such as the Penobscot/Allagash/Discovery 169 or 174 were generally three-layer rotomolded polyethylene boats, rather than Royalex hulls. An exception is the Old Town Tripper 172 which is Royalex.

While the two different hull materials may look much the same, there are significant differences. Polyethylene hulls are much heavier than Royalex and harder to repair. Conventional epoxies and vinylester resins bond very well to the fabrics and resins that most composite boats are made off, but less well to plastics. This is especially true of polyethylene which has been notoriously difficult to repair durably in the past. I would pass on any three-layer poly boat that has been repaired. And be aware that any three-layer polyethylene canoe that is big enough for your needs is going to be very heavy. For example, a Penobscot 174 will weigh around 85 lbs.

Thank you for all of the information!

Here is the Tripper 172 that I am also considering. The owner says the discoloration inside the hull is just due to an unfinished paint job that was halted by the previous owner at the primer stage and could be remedied with a can of paint. Because the outside is painted (and I don’t see the Old Town authenticity emblem on the deck), I would need to make sure based on the HIN (if I can find it in person) that it is an Old Town and thus truly a Tripper 172 (I would prefer Royalex to polyethylene if its in good shape). I would add another thwart and probably paint the inside. In the picture of the outside of the hull, I see some blemish by the skid plate to the right of the photo. Can’t tell if it’s merely cosmetic or not. Would need to check that in person too. 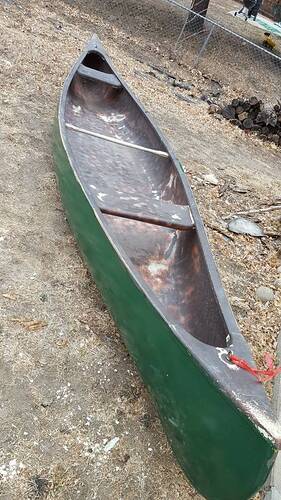 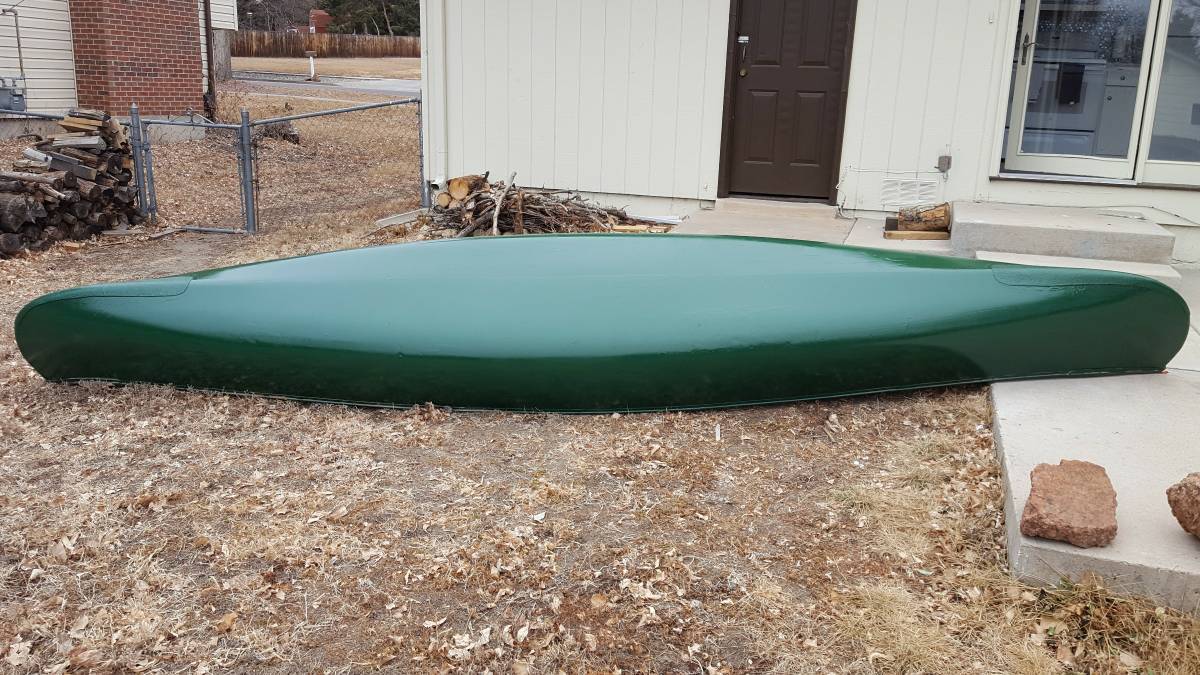 First, I love Jensen 18’ canoes but as a family camping canoe you should have some experience and be comfortable with balance and know how to use positive strokes to turn. The green Old Town may be a better choice even though heavy. It looks like somone has put skid plates on the ends and then given the outside a paint job.

Yep. That’s what the seller said: that he finished painting what the previous owner did not on the outside, but has not on the inside.

The Jensen was widely used as a stock class Marathon tandem racer. Yes, it likes to go straight ahead and fast and there might be a bit of a learning curve to making it turn. The green canoe has the hull shape of an Old Town Tripper. The Tripper was a well-liked boat for river use and even whitewater. I suspect the area of irregularity near the one abrasion plate is just some excess resin that leaked out when the plate was applied. The green paint, whatever was applied to the interior, and the skid plates will add a few pounds to the original weight of the boat which Old Town listed at 80 lbs, so be aware that boat will be a load to carry and car top. The paint will also get scratched off the bottom. But it could always be repainted if you can match the color.

I think I would get one of those one-person canoe loaders for car topping.

@PsychPaddler said:
I think I would get one of those one-person canoe loaders for car topping.

You might want to bring this up as a separate question, because I don’t know what kind of loader you might be considering or how much it might cost, but there are a few methods and rack modifications that are very simple.

@PsychPaddler said:
I think I would get one of those one-person canoe loaders for car topping.

You might want to bring this up as a separate question, because I don’t know what kind of loader you might be considering or how much it might cost, but there are a few methods and rack modifications that are very simple.

I might do that. The ones I was looking at are the kind that you put one end of the canoe on and while it rests, you can walk around to swivel the other end to the front of your vehicle and then secure with straps, ropes, etc. I have found a couple of these types used on craigslist in the same area as the canoe for $40 and $50. I may start a new question on that topic to learn more about the DIY options.

Regards the tripper, the skid plates look a lot like the factory-installed skid plates on mine. Otherwise, the outfitting looks very different, but they made those things for decades and the outfitting probably changed through the years. My Tripper, made in 2000, has grab handles integrated into the deck plates, came with a carry thwart and the seats were dropped several inches below the gunwales. I’ve never seen a Tripper with plastic seats, but I suppose they are out there. Mostly I see those on OT Discovery. It is disappointing the hull is painted because we can’t really see what shape the hull is in.

There’s not much reason to paint the inside of the hull, is there?

You don’t say how you plan to use your canoe. The Tripper is a great, but heavy-ish, all-around boat whereas the Jensen is for going fast and straight. So, very different use cases. Outfitters on the Rio Grande love Trippers. I had three offers to buy mine when it was there in March.

I am planning more for family tripping with little to no portaging. I did end up grabbing this Tripper and it seems like its a bit old, but in good functional condition. But there is only one place for a center thwart (I was thinking maybe there was a missing thwart closer to the stern, but there are no holes in the gunwales to indicate such). I will probably replace the current thwart with shaped yoke an make install another thwart further back. Not sure about the painting either. But, I think the age explains the seats etc as well. It looks like in general this is an older configuration.