The canoe I’ve just begun rehabbing has metal end caps. There is a lot of decay in the wooden gunwales and deck especially beneath the cap, and when the canoe is stored upside down, water that runs down the underside of the outer gunwales pools in the cap until it evaporates. I’m guessing this is a common issue - would the best bet just be ditching the end caps when I replace the gunwales/decks? Other solutions? 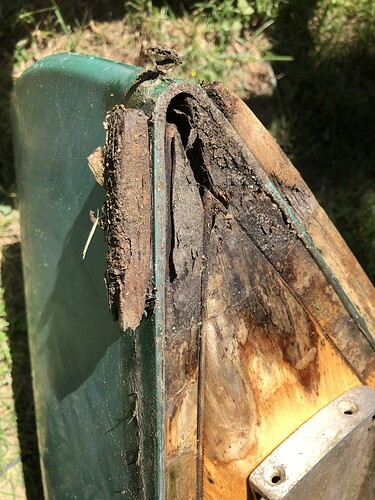 Water on the decks is a common problem. You can drill some weep holes to let the water drain.
The canoe is the photo is suffering obviously from ground contact. Moisture from the ground has compromised the deck and the gunwales.

I drill a hole right at the tip of the wood trim as close to the hull as I can get to allow the water to drain.

Thanks! The last owner had been keeping it upside down on sawhorses, but I’m not sure for how long. I’m thinking that drilling holes in the tips of the metal plates/caps is worth trying, as that is the lowest point when the boat is upside down and otherwise will lead to more rot. Here’s a pic of the canoe with the plate attached (and full of water) 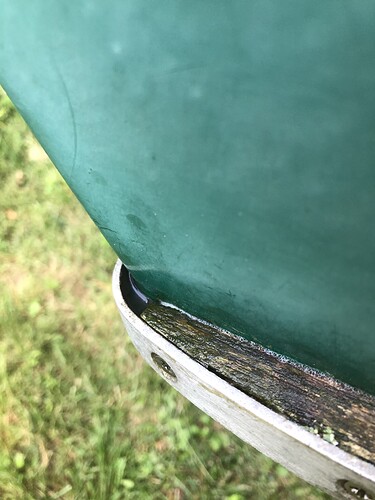 Metal end deck caps are pretty uncommon. And I have never seen a canoe with inlaid wooden deck plates and deck caps. I suspect the caps were installed to cover up the rot once it had occurred.

I don’t like end caps/decks for the reasons you’ve discovered and have removed them from the canoes I own(ed). I actually prefer the aesthetics of a canoe without them.

I had am 18 1/2 Sawyer Charger that was an early kevlar boat. It had decks that were extremely long, more than 2 1/2 feet. They had a drip edge molded into them and helped keep water out of the boat.