A fellow p.com forum member is interested in buying my canoe-kayak trailer and brought up some questions about hauling a canoe on it that we could use some feedback about. The trailer was home-built by a guy who designed it to haul a pair of 17’ sea kayaks. I have only used it a couple of time to transport a 15’ and 17’ kayak and never a canoe. Since the location of my home is on a steep hill on a single lane dead end street with a dead end gravel alley 150’ in the back, it proved so difficult to store and hook up this trailer that I developed other transport options.

Attached are a couple of photos for reference. The prospective buyer wants to transport an 18’ 6" tandem canoe. The overall distance from the license plate to the front of the tongue is 14’ 9". Space between the cross bars with the adjustable cradles is 9’ 10" center to center.

Buyer is concerned about the rear overhang of a boat that long on the trailer. How close is practical to have the bow to the tow vehicle? With two boats it would be less since the farther to the edge of the front crossbar a boat sits the more closer it will be when the vehicle is turning and the angle changes between the car and the trailer. With the ball extension of about 3" there is about 5’ of actual clearance from the front crossbar to the back of the vehicle.

In our state PA (both buyer and I live here) you are allowed 6’ maximum overhang of a load off a vehicle. So that canoe could be loaded with a minimum of 2’ 6" (30") of extension beyond the front crossbar, putting the nose 30" from the vehicle. Presumably it could be slid forward a bit more than that, maybe 12" to 18" but that seems risky.

Do those of you who trailer canoes see potential problems with this set up? Is the 10’ spacing a problem for carrying on cradles or would it be better to haul such a long canoe upside down (how I have always hauled canoes)?

I had originally planned to build a treated wood or Trex platform to deck the central rectangular frame so I could use the trailer for hauling too, but ended up buying a 4’ x 8’ utility stake-side trailer shortly after getting this one so I didn’t bother. But I wonder if adding a third middle crossbar to the frame would add better support, or adding the deck and perhaps a box built onto that to store gear and paddles and to act as another mid-trailer support structure.

I have not tried it. but it is possible that the wing brackets on the narrow front crossbar could be moved to the front of the rectangular frame to allow closer spacing on the support and to allow mounting two wider boats. As set up now, the canoe would have to be centered and there would be no room for a second boat. I’ll try that out today to see if the bracket elevates high enough.

The trailer was inspected by PennDOT for safe construction and is registered. Pretty sturdy welded frame with good quality wiring and nice leaf springs on the axle. It tows nicely, better with heavier boats than I now have in the fleet.

Anyway, I can’t really advise him on how well this would work for his large canoe so some feedback from trailer using canoeistes would be welcome before he makes the trip across the state to see and possibly buy it. 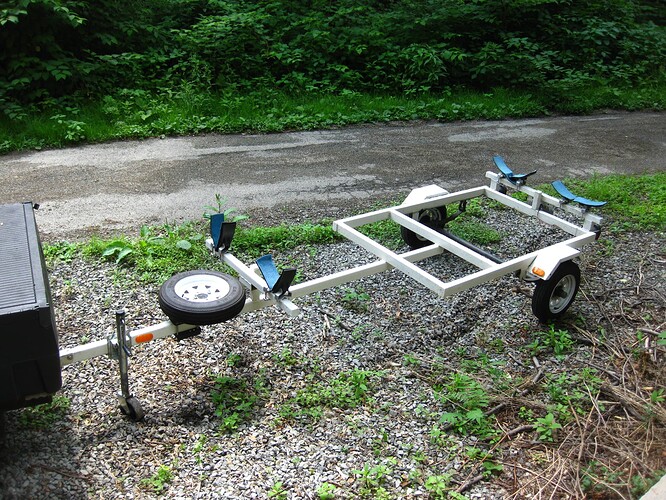 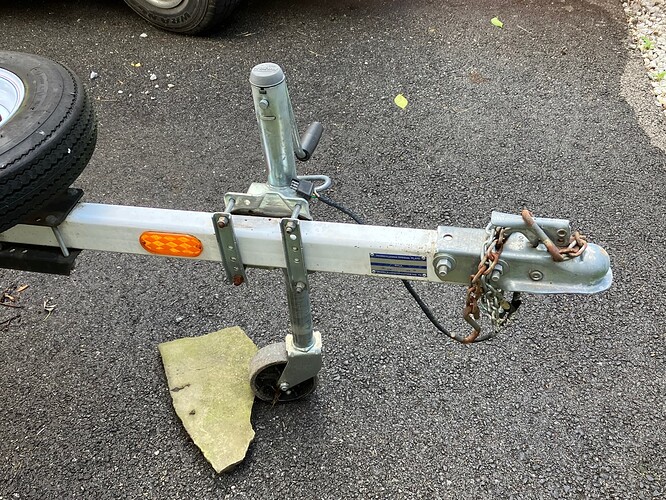 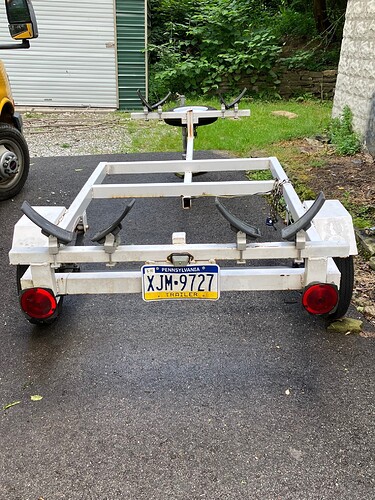 Here is a simple mod to make it canoe friendly.

Four trailer bunks to attach them to the trailer.

Here’s my boat trailer modification. Can carry three kayaks or two canoes. I carry the canoes upside down and use Minicel blocks to protect the gunnels. The ones I made i9n the photo are for kayaks the big one is custom made for the tandem kayak in the background on the stands. 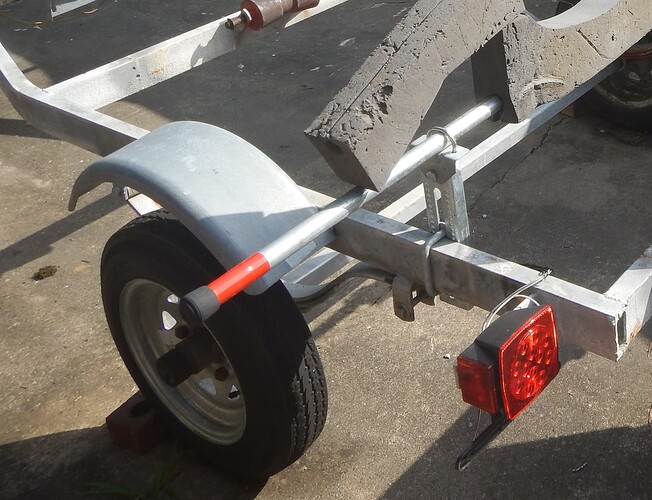 Those cross bars can be extended with 2X4s as well. I used carriage bolts epoxied into the wood with pieces of steel drilled to accept the bolts under the existing steel bars. Carpet attached with waterproof glue helps protect gunwales, as can bits of pipe insulation. Protruding dowels glued into the underside of the 2X4s are a good idea to help prevent straps from sliding off the ends of the crossbars. The same can be done on the top , inside the gunwales, as load stoppers, as long as you load the canoes the same way each time. It is certainly best to keep the width of the crossbars less than that between the outside of the trailer’s fenders so its less likely that you hit the overhanging canoe sides on trees and such when trying to back into tight spots. Care must be taken not to run the overhanging canoes into stuff when backing and, of course, flags (perhaps even red headlamps) hung on the back of the overhanging canoes, as required both by law and prudence. I don’t see a lot of room for cargo boxes on that trailer though, unless you raise the crossbars quite a bit and that would require some welding, I’d think.
PS: I started with quite a bit different trailer than is now being considered but, for what its worth, my solution looks like this. 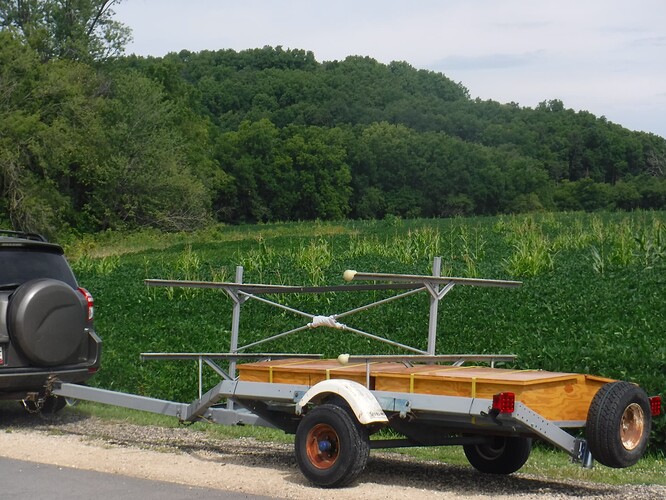 Looking at the way your trailer is built you could just remove the kayak saddles and bolt a carpet covered 2x4 directly to where the saddles were.

Yes. Remove the kayak cradles. Pad the cross bars.
It should be possible to extent the length of the trailer tongue. It is the best solution. It could be ordered from the trailer company or made out of channel.

I have always liked big canoes, so I ordered a new trailer with the trailer tongue extension.

I have seen 18’6" canoes on top of Mini Coopers, so I don’t see a problem with the spacing. I do think they would travel better hull up.

Remove the saddles and put some pipe insulation ( the foam kind) on the cross bars. Don’t trash the saddles, they are getting rare out in the world, neither Thule or Yakima makes saddles anymore.

I never use pipe insulation on racks. The foam degrades quickly in UV. Pool noodles are closed cell and hold up much better – some people object to the neon colors but sometimes you can find more subdued shades. (I actually like that the colors make it easier to find my generic grey car in parkiing lots.) They are available in many different diameters and cross sections and most have hollow middles some even already split. If not split, a serrated steak knife works quite well for splitting them.

One problem traveling distances (as the buyer would like to do) with canoes right side up is that they can fill with rain.

I suppose the tongue could be extended by a welding shop but it is already nearly 5’ long. As I mentioned, the guy who built it designed it for 17’ kayaks.

Might not be a bad idea to move the tail lights out further to the side as well. I bet two overhanging canoes would pretty well hide them from view as they are now placed.

I used old fire hose for padding.
Notice the length of the trailer tongue on the homemade trailer.
These trailers carry little weight.
You need clearance between the bow of the canoe and back of the truck in order to make turns.
You don’t want 7 feet of canoe sticking out the back of the trailer.

I am not especially experienced with canoes on trailers, but very experienced hauling a variety of bulky loads on trailers with a variety of vehicles. Ideally, you want the front of the canoe (or lumber, or steel sheet, or roof trusses) to be 1/2 vehicle width from the center of the hitch ball. If you can do this, you will have no problems with the canoe ever touching the vehicle. Practically, if the canoe is centered on the trailer and close to the level of the hitch ball you can do with much less. A canoe centered on the trailer and at the level of the tongue could be 6 inches behind the hitch with no problems for all but the most extreme backing maneuvers.

You can check my math since I am winging this as I sit in a waiting room with my iPad mini but I think these figures are right or close enough. If the boat can be 6” from the vehicle (presuming added clearance by the reciever and ball stem is about 3”) the maximum front extension from midpoint of trailer is 7’ 2”. that means 11’ 4’ of the boat has to be behind the midpoint. 11’ 4” minus 7’ 5” is 3’ 11” of rear extension. The state allows 6’ 0” overhang so that is well within the law. That will be about a 60-40 weight distribution. For a load only around 100 pounds that does not seem to me to be a prospective issue. Could even be balanced by placement of a second shorter boat and/or by lashing loads ahead of the mid point. And the pivot point of the trailer is not the midpoint since the axle is so far back anyway.

Most of my trailering experience has been box trailers full of rock band instruments and amps, stakebeds full of hundreds of pounds of construction materials or up to a ton of demo debris, a 4200 GVW camping trailer or a flatbed with a gymkhana sports car on it. I am used to having to consider load balance and even adjusting tire pressure for high speed safety.

Compared to all that, a couple hundred pounds of boats is almost like towing an unloaded trailer. Other than being under the 6’ extension law and making sure everything is securely fastened and properly flagged, there really is no need to fret about the load’s effect on the tow vehicle.

That looks like it started life as a Harbor Freight trailer, the tongue can easily be extended with a piece of steel spliced in, either bolted or welded. the forward cross piece can then be moved to center the canoe. It’s not a lot of work to modify it to fit the need.
I used a similar trailer for a small sailboat. The biggest problem will be remembering it’s there when towing it.

Six inches is not enough clearance between the bow of the canoes and the tow vehicle, especially when hauling two or more canoes. That is why I mentioned the tongue extension which is no big deal to execute.

I have been carrying an OT Guide 18 for 30 years on a trailer because it is a heavy canoe. It would not fit on a conventional trailer.

Definitely NOT a Harbor Fright trailer. Only their dinky little 6.5’ version has a straight tongue – the larger ones are vee yokes. And you can tell all the welds are home done. He may have swiped the axle and suspension from some other trailer but the guy I got this from built the frame himself and the tubing is heftier than the HF versions.