Hi there! I’m going to be moving to Santa Fe from upstate NY and would like to know whether there’s any backcountry class i/ii canoeing in the area. Also, are there any good guidebooks on the subject for the region? Thanks!

I lived in Taos, NM for a while but my interest was downhill skiing at the time, not paddling. It’s a beautiful state.

A quick search found the following link; probably more out there. http://southwestpaddler.com/indexNM.html

Look at the lower Rio Grande below Alb, and parts of the San Juan River. There are some big reservoirs around.

NM rivers will be a bit different from what you’re used to. Most are small, fairly quick-moving, and the flows vary widely depending on the time of year. I haven’t paddled the rivers in that area specifically, however. You’ll have reasonable access to some decent lakes: Cochiti should be the closest and would make for a decent paddle. Abiquiu Lake is north of Santa Fe and has some nice scenery (think Georgia O’Keeffe and Ghost Ranch). Further north is Heron Lake, which is a good-sized reservoir dominated by sailboats as it’s a no-wake lake. The campgraounds are clean and well-maintained. It does ice-up in the winter. Next to Heron is El Vado lake which is popular with powerboats and jet skis. If you continue north and west you’ll find some nice mountain lakes near Pagosa Springs, Bayfield, and Durango, Colorado.

The Rio Grande “Orilla Verde Run” above Pillar is nice, but you have to get out at the visitor center in Pillar, or you end up in The “Race Course” which is a 3 mile up to class 5 at time whitewater run.
Also the lower section of the Rio Chama between Chavez Canyon and Big Eddy is also nice, but is expected to have low water the next 3 years due to repairs being made on El Vado Dam. 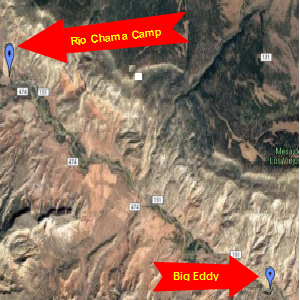 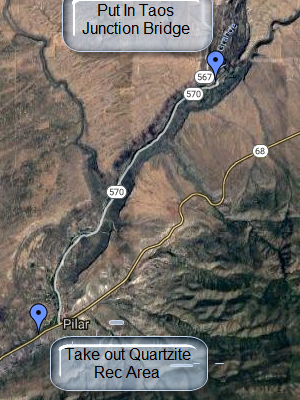