Put the MR Explorer in on Big Creek and paddled it and the Little Saluda River a few days back. It was hot and humid. High Temp was 98F, but a light breeze and partly cloudy skies helped. I find it is always a bit more moderate close to the water. We saw more wildlife than I though we might, Great White Herons, Coopers Hawk, Blue Heron, Red Headed Woodpecker, Prothonotary Warbler (bright yellow male), Wood Ducks, Musk Rat, and numerous Long Nose Gar. There was profuse Duck Weed with some Azolla mixed in covering the surface of back waters. Paddling up Big Creek a large tree had fallen completely across blocking the way. It was too hot to want to portaged. We saw a white variety of Marsh Mallow with a leaf that is different to some that grows at our pond. We ate lunch on a small rise above the Little Saluda River. It was good to get out with a friend.

The Azolla fern is the dark green scattered in the lighter green Duck weed. 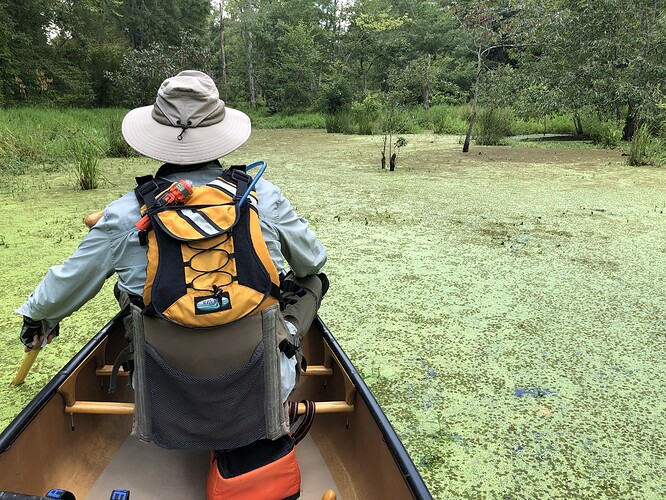 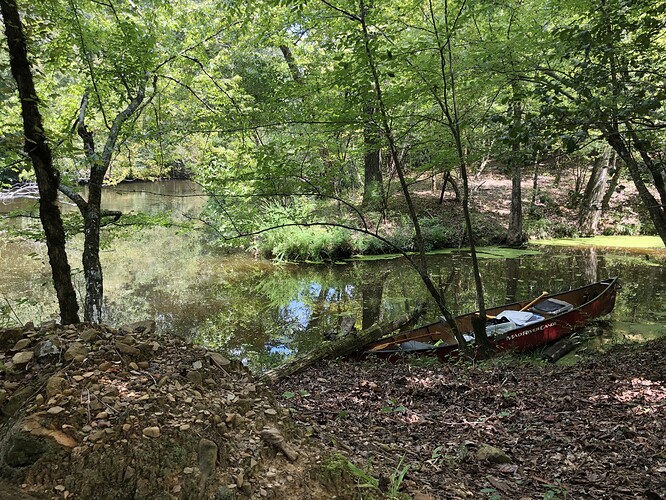 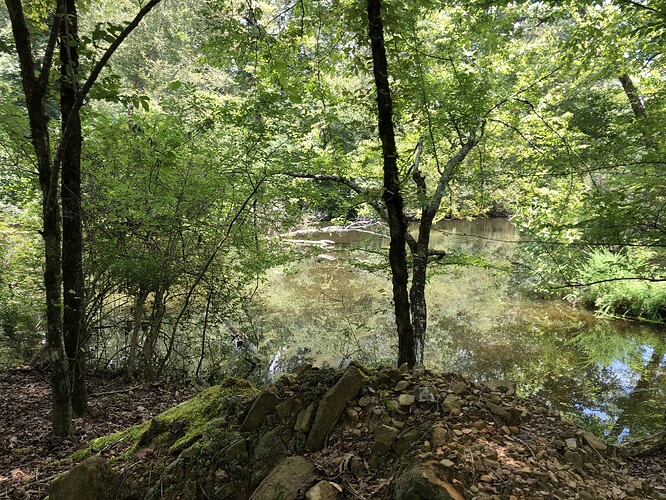 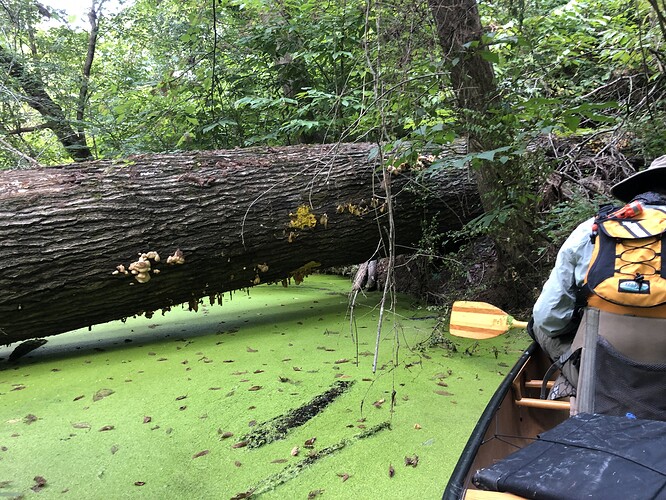 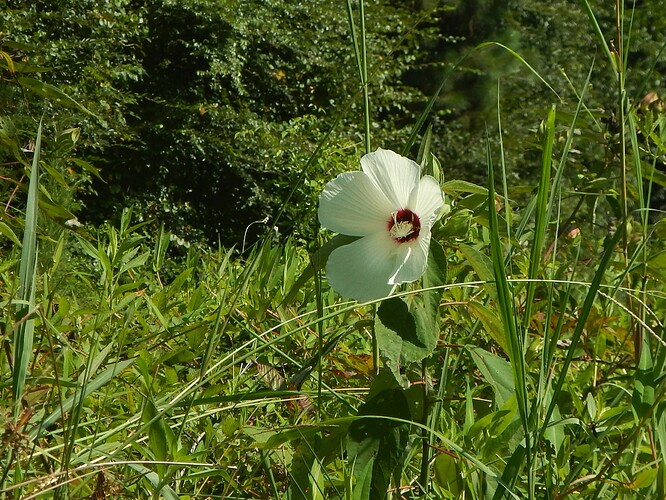 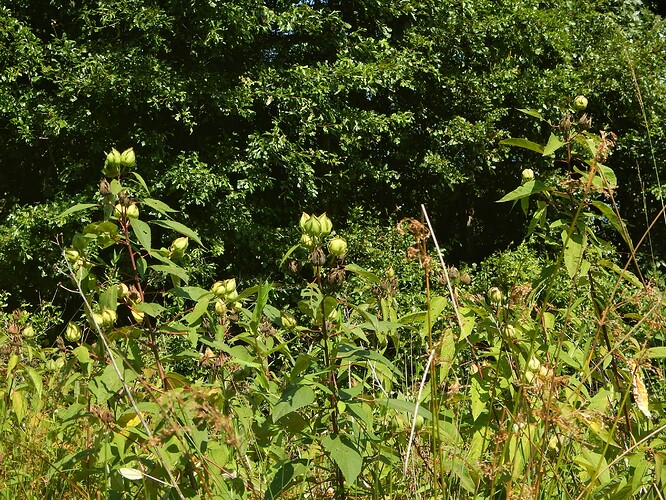 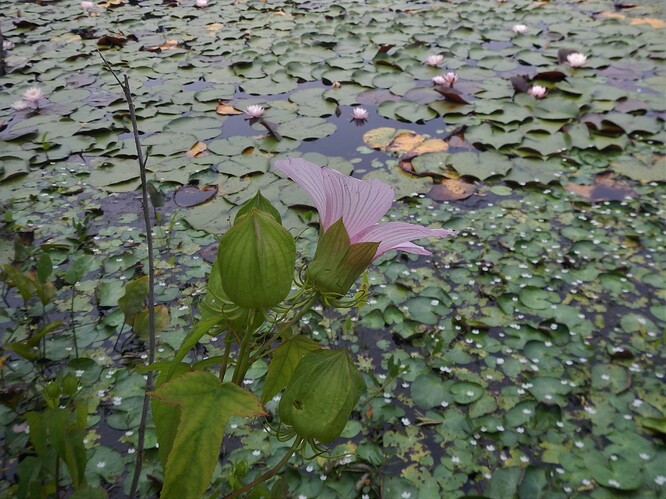 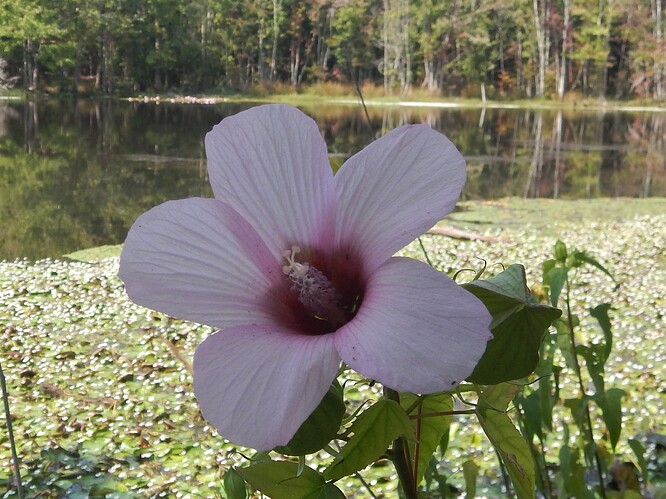 You didn’t have your saw along? That is some snaky looking territory.

I don’t know why, but Cottonmouths aren’t found in the waters of piedmont and mountains. It is good habitat for snakes. A photo of the Little Saluda River looking up stream as you leave Big Creek 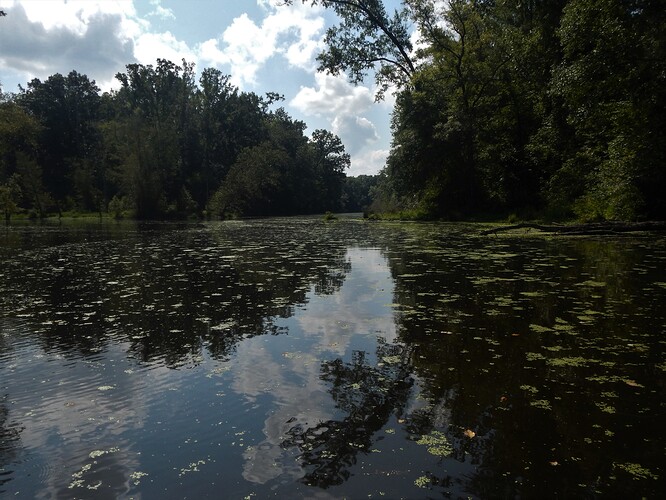 If you don’t mind slimy green stuff. Cottonmouths not needed. Plenty of other biting beasts.
I should have been there.

Saturday in New England - Wood River/Pawcatuck River in RI. Crystal clear water, short rapid for a little excitement, and a rope swing for a swim. Two swings and my ab’s were killing me. Absolutely no Cottonmouths - snakes freak me out 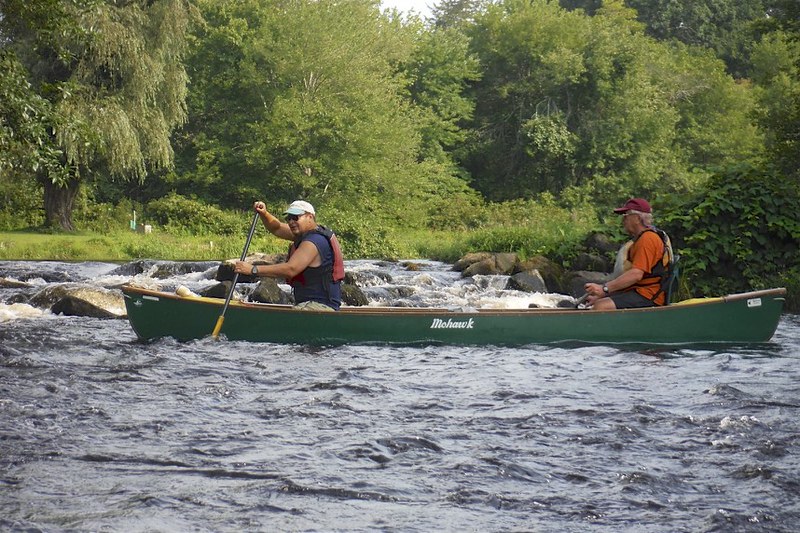 Nice photos - thanks. From where I sit it looks kinda’ hot, close, and humid but that has its attractions, too.
Went out on the Wisconsin for a couple days last week with a fellow from the Ozark group who was wishing to escape the temps in Kansas. We lucked out on the weather (missed two EF3 tornadoes by two days) but it reminded me of the Pnet trips GuideboatGuy and I used to lead (9 consecutive years we did that…) in August. Though we didn’t this time, a paddler can simply fry in the August sun out there. There’s not a bit of shade and the sand can seriously burn your feet.
Swimming is the respite. (I searched my photos from those days to post and noticed they’re all on floppys which I can’t even read on my set-up anymore, though I still have the hard copies.) We planned the trips so there would be a mid-afternoon ice cream stop each day though - try doing that in the Boundary Waters… Stuff for the lazy, hazy, crazy days of summer.
Even just setting up the camp chairs in three feet of water and letting the river carry the heat away could be relief from paddling in the (sometimes) baking sun. Once while doing that one of the folks I was with exploded from his chair in terror. He thought a snapping turtle hit his foot. No, it was a full bottle of Corona that someone far upstream had lost. I’m not counting on that ever happening again…

It makes hot, humid, and close seem really attractive in its way. But its all good.

I once found a pack of Summit wine in cans hunting in some high Mountains in Colorado. Not on a trail or looked liked it had been purposely placed there. I rescued it.

Another friend had run out of water while paddling his canoe, and came across an unopened can of beer floating in the water. You might get lucky again.

I found a can of Coors beside a mountain road. It had been there so long the label had almost faded out. It was a hot day and the local plant looked thirsty.

… it reminded me of the Pnet trips GuideboatGuy and I used to lead (9 consecutive years we did that…) in August.

Another name from P-net history - GuideboatGuy. Hope he is doing well.

Another name from P-net history - GuideboatGuy. Hope he is doing well.

Haven’t seen him in a couple months. He went down to the Buffalo this spring, we did a day paddle on the Wisconsin, and another on a small creek near here this year. But I believe he’s doing well. His employment situation has changed but I don’t know what the most recent situation is.

The photos remind me of paddling in the East as a kid and watching all of the water snakes hanging in the brush and swimming the water. I don’t miss it.

I went to forestry school with a guy from Mississippi, that told the story around the campfire one night of the day a cottonmouth that fell out of a tree and landed in his canoe. It bit him several times in the leg before he threw the snake in the water. He spent a while in the hospital, but was okay.