Can't Decide Between A Dagger or Pelican

I am VERY new to kayaking. After doing lots of research I found 2 (used) tandem kayak’s I’m interested in. I’m only going to be using them to take my very young kids around, but would prefer it to last and not be easily tipped over. The options I have are 1.) Dagger Bayou 2, which is 7-8 years old and has been used a LOT. 2.) Almost brand-new Pelican Alliance 136T. I know Dagger is generally a better brand, but it’s been used a LOT more than the Pelican. The Pelican is about $100 more, and I’m okay with that if that’s the better choice. Reviews for both kayaks are great. If anyone can help me, I’d really appreciate it! Thanks!

Why is the seller getting rid of a little used boat? Getting rid of a dog to paddle?
Dagger would be embarrassed to be in the same sentence as Pelican.
Check the Dagger for soft/ thin spots on the hull . Is it badly sun faded? What condition are the hatches in? Do they seal? Are they soft and mushy?
If not, negotiate the price down on general condition.

Thanks for your response! He’s getting rid of the Pelican because he doesn’t need a tandem anymore. I haven’t seen the Dagger yet but now I definitely know what to look for. Thanks again!

I recently bought a 17-year-old plastic kayak. It had a ton of use but had been stored all its life inside a garage. It’s in fine shape despite its age and I expect to get many more years of use from it.

Have you considered a sot tandem, that can be paddled single from a mid seat?

Given a choice, remember that Pelican is an Entry Level Boat. They are cheaply made and designed to get people into the sport without spending a lot of money. THEN, if you like paddling, you upgrade to a better boat.
Daggers have a proven record but cost more.
Here are some pics of the bottom of a Pelican taken at a kayak event last Spring. EVERY kayak in that fleet was like this! 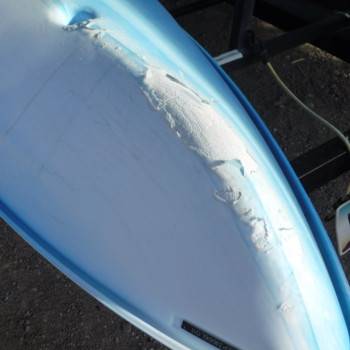 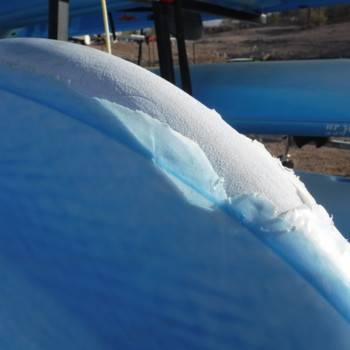 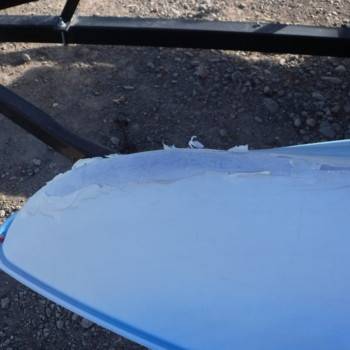 Pelicans show heavy use / abuse real fast from beaching and dragging.
Almost considered a disposable ksyak. If care is taken in use they will last years without problem.

I have a couple tandom pelican kayaks for family trips and they still look brand new. As long as you take care or your belongings you’ll be okay. They are sot barges and could float a car. The kids love them because they can stand, and jump on and off with vigor.
Not as nice as a Dagger but I paid $299 for each on sale at Academy Sports. Store them inside and you’ll be fine.