I have 4 wilderness system pungos that I am looking to make a little easier to strap down to my trailer’s J-bars. Has anyone used the Sea To Summit Carabiner Tie Down straps? I am looking for opinions as I do not see much for reviews on them. That makes me think that there aren’t a lot of people that like them. They look like they would be MUCH quicker to strap down using J-bars than having to run the strap thru a cam buckle each time. The only issue I can see is that there would only be one line of webbing over the kayak in each place versus the regular two, but they are rated at 600lbs so wouldn’t they be strong enough?

I have used the regular cam straps for years now. They are fine but very slow. I am sure that others will disagree with that, but it is the case with me. I hate spending the time looping them over and threading them back thru the buckles for each kayak. The carabiners seem like they would work great. Thanks for the opinions.

Maybe because it would cost you about $70 to tie down one boat! I can get Yakima or Thule tie downs for $30 a pair.

Actually, the straps are only $28 for a pair brand new on Ebay. If they were more, I wouldn’t be considering them either.

And here I thought that I had invented the idea.
I make my own by cutting the original hook free, resewing the strap into a loop then using CLIMBING carabiners to hold the strap to my bars.
I find that normal carabiners are too weak for the stress.

Just out of curiosity, I took a look at the caribiner tie downs on Sea to Summit.

Speaking for myself; I view the caribiners as suspect at best for hauling a load.
They appear to be rather puny (maybe a step or 2 above the crappy little key ring biners you find in Weird World), and the gates don’t lock.

The more components you add to a system; the more likely you are to experience a failure.

I’d personally save the money the Sea to Summits cost & use Yakima, or Thule straps.

Oh, four Pungos on a trailer. If you mount short straps on the bars it won’t take so long. That way you don’t have to string them each time. If you want to use those caribiners go ahead. Just remember that the aluminum ones are not rated for much strength and the steel snaps corrode. If you use ratchet straps you can over tighten the strap deforming the boats.

If you had racing shells or (narrow) sea kayaks and wanted a good rack with FAST tie down time YouTube “Good Boy rack” . The rack might cost more than the kayak… :o , but its fast.

I appreciate the comments. I was also considering making my own and using climbing biners but figured the failing point would be my sewing. And also figured that by the time I bought the biners, I would have about the same amount of money invested as the pre-made ones from Sea to Summit. Currently I leave my Thule straps attached to the bars and just loosen them and slide the kayaks out but it becomes a two person job putting the kayak back on trying to get it under the straps while holding it … not to mention having to then leave them unattended on the trailer while out on the lakes.

I guess at this point, it is either buy and try them or make my own.

Perhaps your problem is 4 pungos and only one person tying them down.

Well, actually, two of the pungos belong to my 9 and 11 year old … kids in general are practically useless

The other belongs to the wife who is usually unpacking all the boats from the trip and getting the stuff into the truck. More likely my problem is that I am impatient. I would rather to be on the water or moving to a new spot versus the time lost packing things up. Many might disagree, but I am usually looking for ways to spend more times doing the enjoyable things

Useless 9 and 11 year old?
Sorry, I couldn’t let that slide…

If kids that age are useless; it is only because they have been allowed to be useless.
I’ve paddled with my daughter, nieces, nephews, and paddling buddies kids at that age, and younger. They had responsibilities, just like other paddlers; no matter what their age.

Pictured is one of those kids.
A great young paddler who helps with boats & gear too. 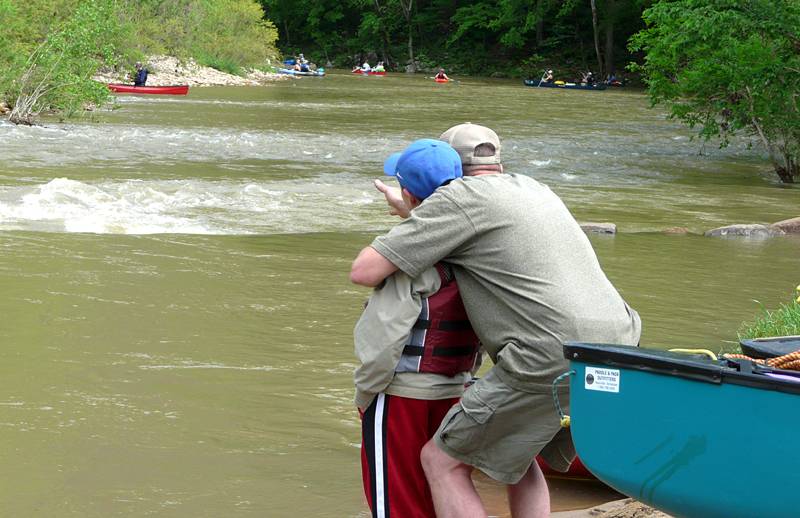 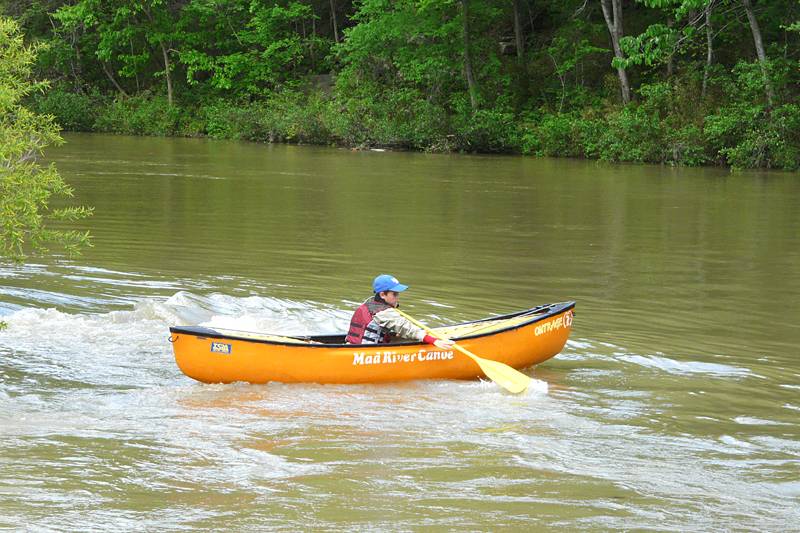 Was a joke … I have great boys. But I will clear out of here I guess. It might be too serious of a group for my taste.

My statement was not a putdown directed at you or your boys specifically.

Having worked over 20 years as a Youth Specialist, and Rehabilitation Counselor, I have heard more than my share of “useless kid comments”. Some are jesting; some are not. What you read was my typical retort to those type of statements.

If you “clear out of here” that is certainly your option, but you would lose a great source of instruction. advice. suggestions, and assistance regarding anything to do with paddling.

Thule Express Surf Straps. They are a bit pricey. I use these as a quick tie down for my wheeleez kayak cart and they work great. They work just as well on a car. Take your time strapping them down though, you don’t want those flying off the car.

@dundug32 said:
Was a joke … I have great boys. But I will clear out of here I guess. It might be too serious of a group for my taste.

Bob can be serious, but far more often than not, he’s the biggest jokester you are ever likely to meet. If we started a thread about humorous happenings among p-netters where Bob was the instigator, it could drag out a long time!

“figured the failing point would be my sewing”

I have a heavy-duty sewing machine and I use Dacron thread and oversew the thing. Never had any problems. 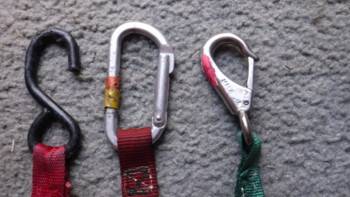 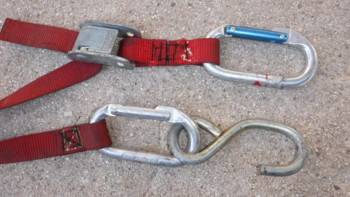 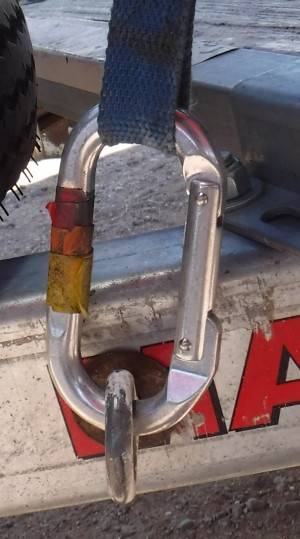 Thanks for the pics of your straps … was going to ask you before if you minded posting some. They look great and I wouldn’t hesitate if I had a good sewing machine. Maybe it is time to get one as I know I would use it a lot. What do you have for a machine?

Canvas shop could stitch up what ever you want for cheap

@dundug32 said:
…if I had a good sewing machine. Maybe it is time to get one as I know I would use it a lot. What do you have for a machine?

Just go to the local sewing machine store and tell the person that you want a simple, no-frills workhorse machine that will sew nylon webbing.
I don’t recall what brand mine is but it has NO computer! The only settings are: a dial with 6 different stitches, a dial that changes stitch length and that is it.
I cannot program it to enbroider my name on anything but for basic sewing, it works fine and is so strong, even I cannot break it.
I use D-50 Dacron from my bowstring making kit as that is strong and does not rot away like cotton thread. Plus if I need to melt a hole through the webbing, the Dacrom melts to the webbing ands seals the stitches. I also oversew the straps with multiple passes.

THE IMPORTANT thing is to use strong carabiners or clips. I use mountain climbing carabiners or at the hardware store, a good strong steel clip. All those cheap aluminum carabiners are worse than useless as they will snap on the freeway and there goes your boat, through someone’s windshield.
Also, if the straps loosen up, the carabiner remains attached to the tie-down point while the hook flies free.

Great info … thanks for the advice

If you have room for one in your house, old Singer treadle sewing machines are terrific for stitching webbing and heavy outdoor fabrics. The ones from the late 1910’s to mid 1920’s are the best as they use a standard modern round bobbin. Add a modern hinged presser foot and they can sew through 6 layers of denim or canvas. I have a 1919 model 15-30 and a 1922 model 66. I have sewn everything from tents and down sleeping bags to the heavy rubberized skins of folding kayaks and triple layers of nylon webbing with them.