I was just thinking back about five years ago when my paddling partners and I were on a 17-day trip along BC’s outer coast. Our route would take us from Bella Bella to Prince Rupert and was not a popular route for several reasons, which only made it more attractive to us. Three days in we learned an expensive lesson. 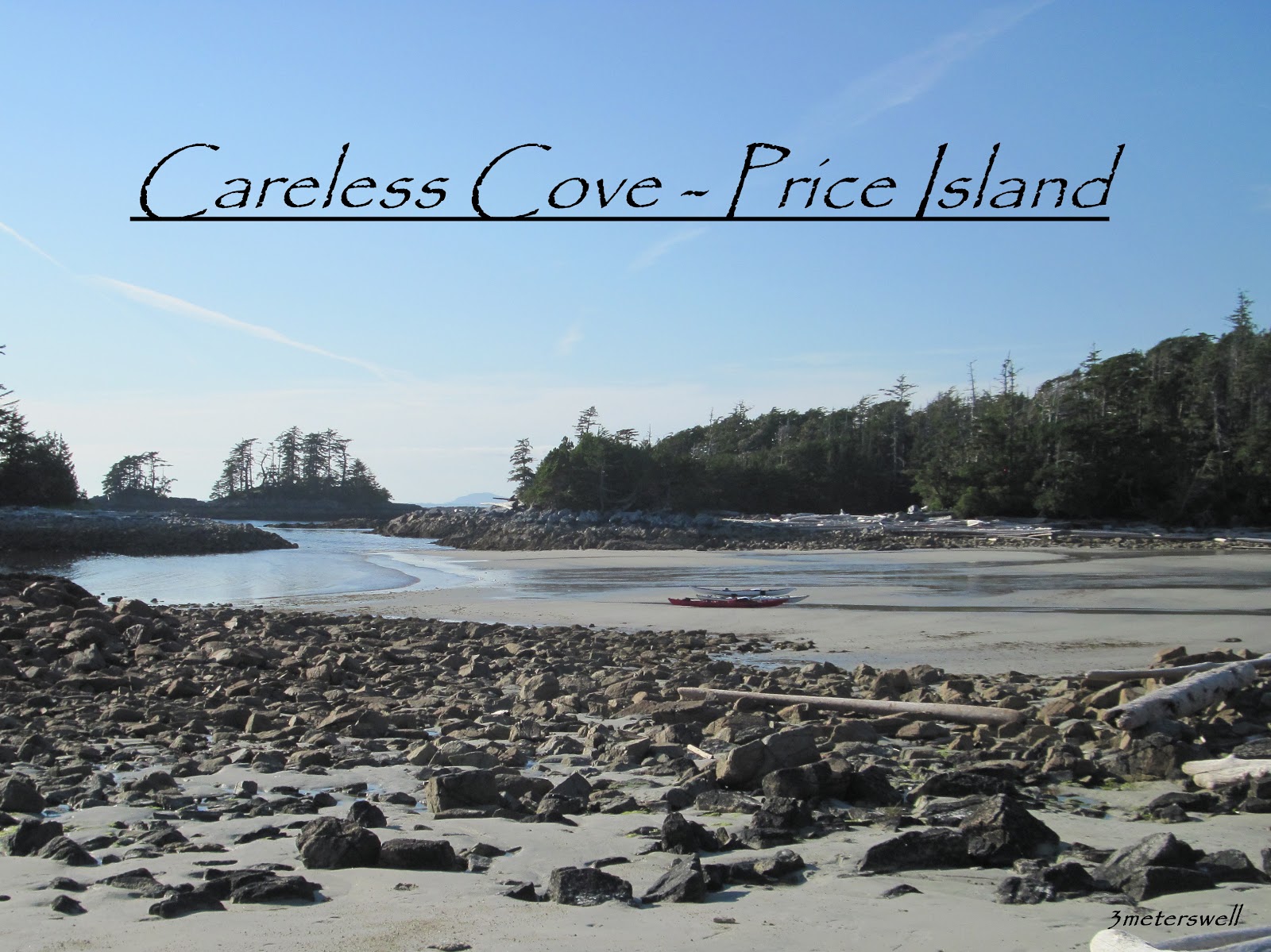 Martin Ryer’s account of having his boat and paddle taken by the evening tide while camped on Spring Island serves as a cautionary tale for all paddlers. It’s easy to say “That won’t happen to me”, which is what I thought until it did. 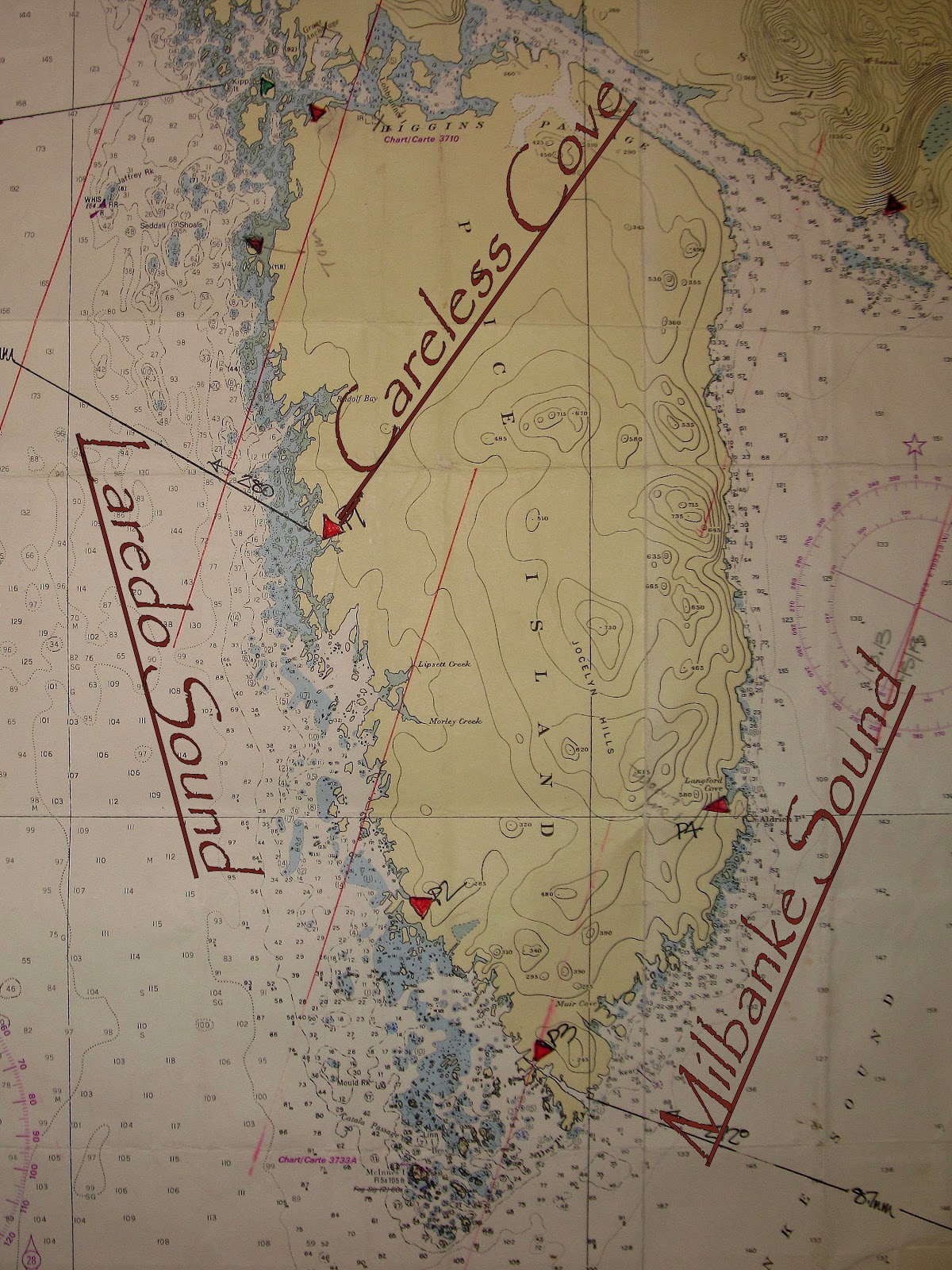 Dave, Greg and I were camped on the western shore of Price Island at a site called “P1” in the “West Coast Aristazabal, Price & Athlone Islands - Field Guide for Paddlers”. It’s a sizable and protected beach that is choked with large drift logs. There are no openings into the forested uplands that line the beach. We were expecting a 15.7 foot tide so camping on the sand was not an option. About 75 meters to the south and over some sharp rocks is a very camp-able area where we set up our tents. Not wanting to carry our boats across the rocks we left them on the main beach. 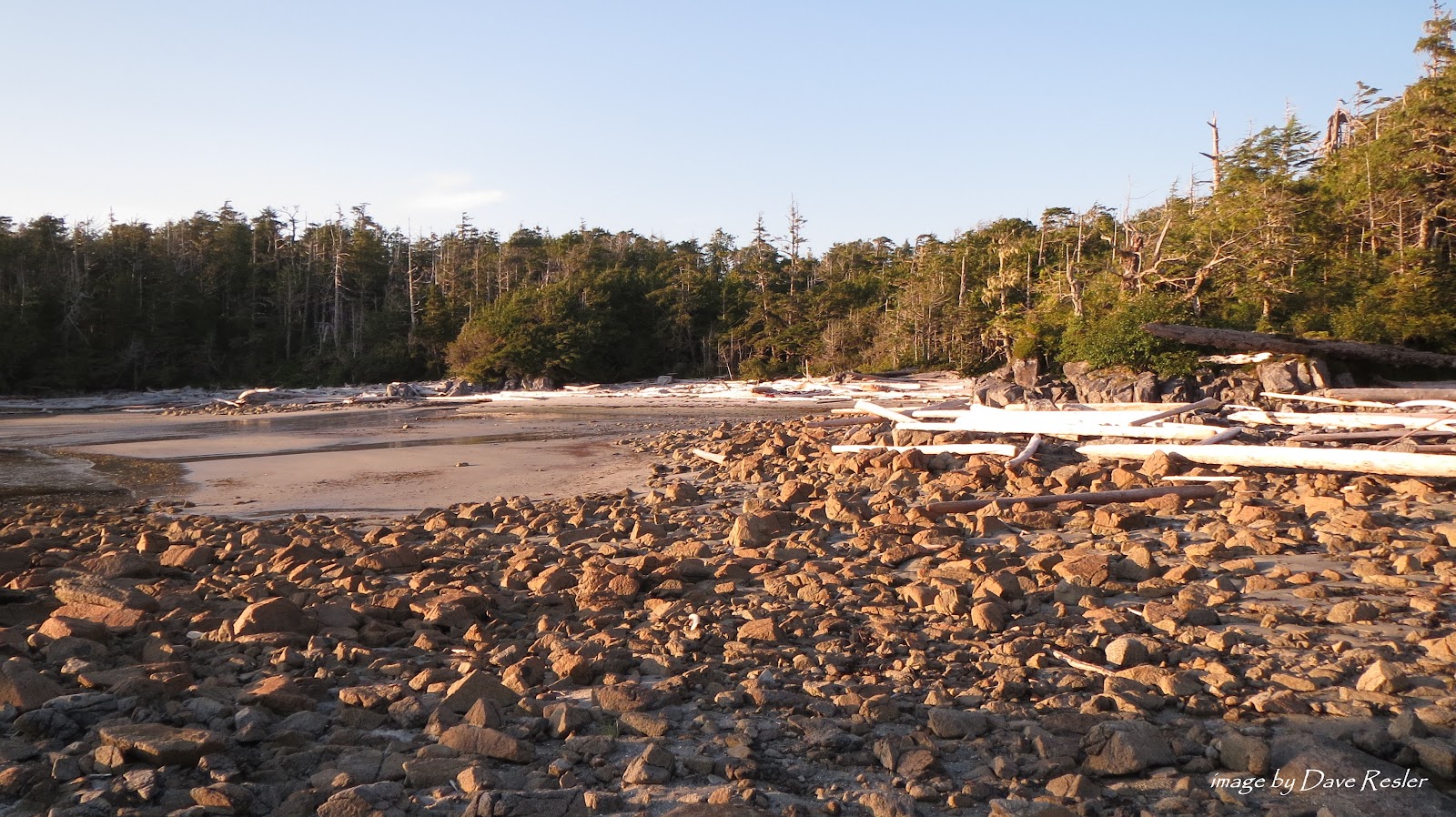 Examining the previous night’s high tide line we took into account the predicted rise of 3/10 foot and added a comfortable margin. The log that we set our sterns on was at least 3.5 feet in diameter and 1/3 buried in sand that was above the point that the tide could possibly reach. There were no winds in the forecast, seas and barometric pressure were flat. I tied the decklines of all three boats to a log well up the beach using my tow line. 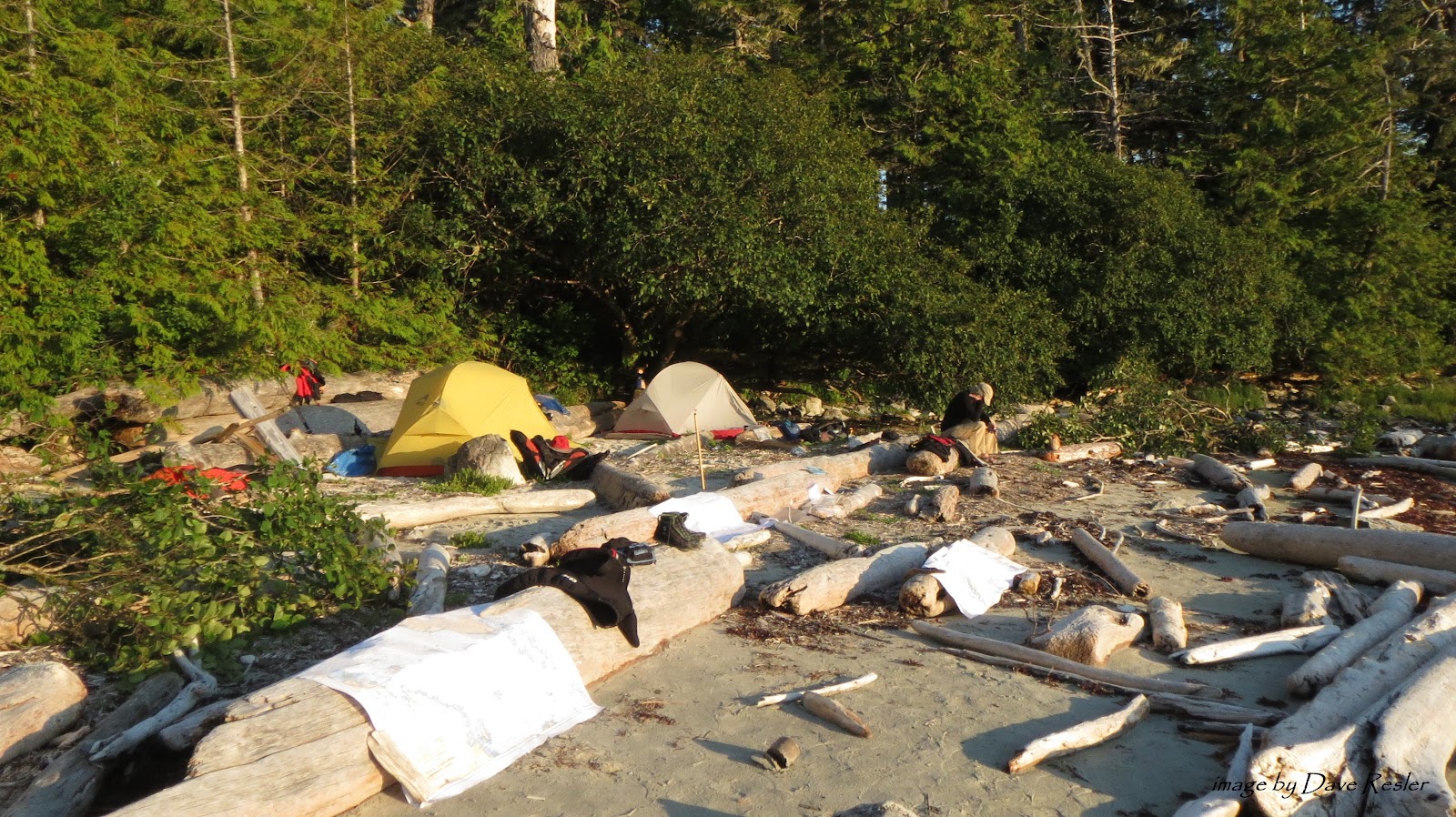 We spread our wet gear out to dry at camp, ate dinner and turned in for a quiet night of slumber. 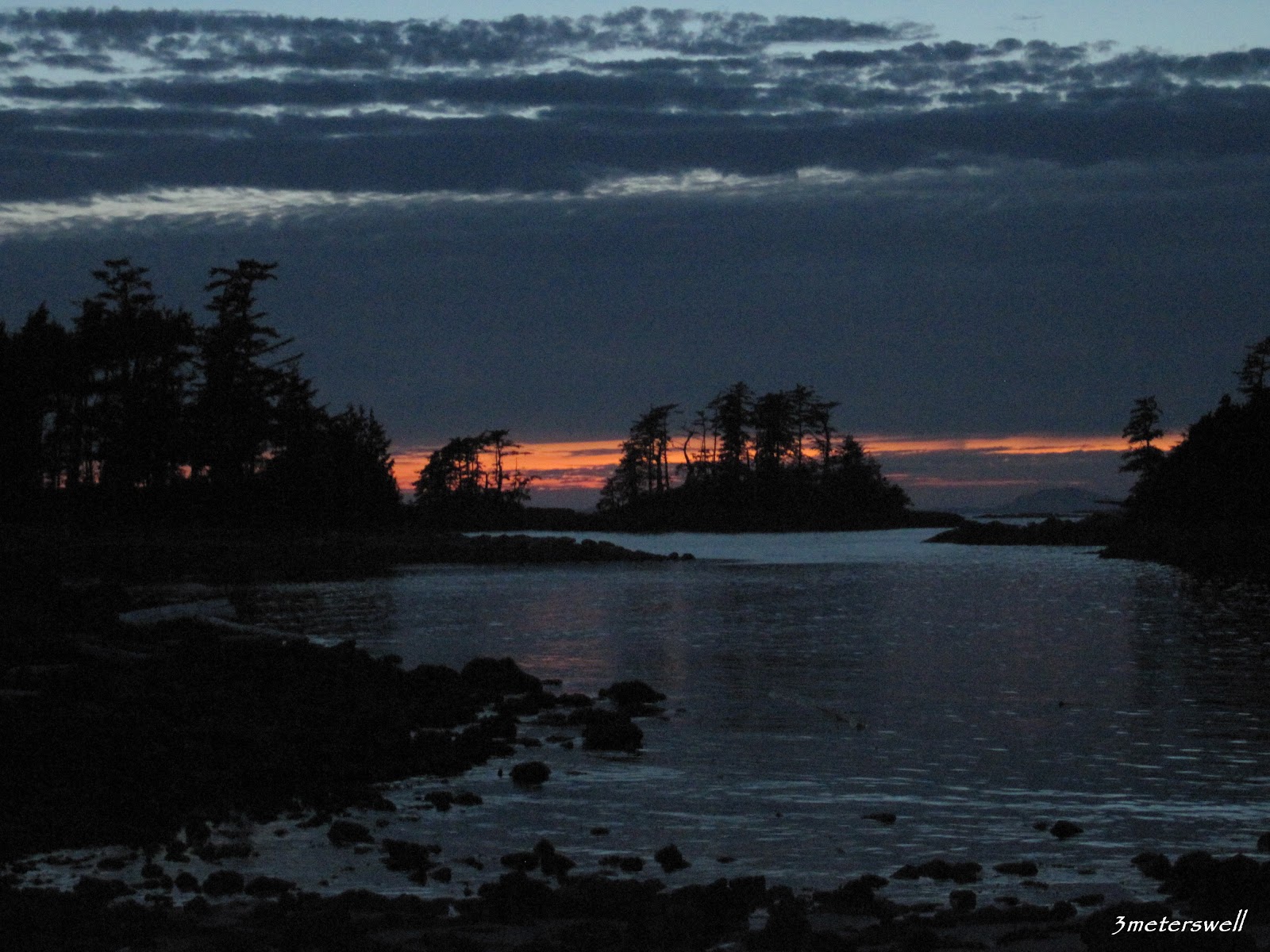 We were up at 5:00 AM, ate breakfast and started carrying our gear 75 meters over rocks from our campsite to the adjacent cove where we had secured our boats. Dropping the first load I looked 100 meters up the beach and saw that our boats were no longer on top of the logs. They were still there but Dave’s Grand Illusion was against the logs pointing north, Greg’s Tempest was pointing south and mine was between them, sideways with the stern up on a large boulder! It looked like a yard sale. We had obviously miscalculated the evening’s high tide.

I went to investigate and saw that I had neglected to put my cockpit cover on. Consequently, my boat was full of water and wet sand. I was relieved to see my four paddle halves and chart case poking up through the wet concrete. My helmet was packed with sand and weighed as much as a bowling ball. I hoped that my hull hadn’t cracked over the boulder. Greg’s boat was tipped on its side and half full of sand and water. His chart case, containing most of Dave’s charts, was hanging from the deck lines like a water balloon full of tan confetti. It had spent some time in the washing machine along with his GPS. Dave’s boat was fine with the cockpit cover in place. Nothing was missing and the cockpit was clean.

I had tied the boats together and my knot had done its job but how did we miss this? We had examined the previous night’s tide line and thought we had taken 3/10 foot well into account. The sterns had rested on a large log that was at least 1/3 buried in sand and above the point the water could possibly reach. Even if the water did touch the log it couldn’t possibly float it…yet it had. The tide had somehow floated it, pulled it out from under our boats and sent them on a yahoo ride. This was with totally calm seas on a protected beach. Pretty sobering.

Dave had lost seven charts costing $140 USD. We gently emptied the water out of the case, pressed the confetti flat and strapped it back to the deck intent on salvaging some of the larger pieces. Greg’s GPSmap76CSx would no longer acquire satellites and was toast. The good news was that my chart case hadn’t leaked and I had brought my back-up GPS along. My hull was fine and all of my gear intact but cleaning wet sand out of the cockpit, helmet, etc. took a while and continues to this day.

Eventually we were ready to launch and it was then that Greg realized his graphite Werner was MIA. He had propped it between some logs near the bows of our boats and hung laundry on it to dry. His laundry and paddle were gone. We spent about 45 minutes combing the cove for that paddle before giving up, tucking our tails between our legs and accepting that the $800+ lesson we had just experienced was a cheap slap in the face that we had well deserved.

The Spring Island site where Martin lost his paddle probably has a different significance to him now than it did before. Likewise, “P1” was just a mark on my chart where I intended to camp. I thought that I had this figured out.

“P1” will forever be “Careless Cove” to me and my experience there has altered my behaviors, hopefully, forever.

Good report. Sorry about your losses.

Did he have a backup paddle?

Yes. We each carried a spare paddle so all wasn’t lost.

Great story, Chodups. I always enjoy reading about your adventures.

I try to include lessons learned and, hopefully, encourage thought.

Question for the heck of it about responsibility.

The place I rent has campsites on an adjacent island and a variety of basic kayaks and canoes around for camper use. At half tide and up the land bridge disappears plus it is a long and icky walk to get to the sites that way. One summer recently a particularly high tide took out two canoes and a kayak at one of the high tide days. The owners found the canoes floating happily about 2 miles out and I located two or three of the paddles in the rocks below my rental.

The missing kayak was never found. It was a privately owned boat by someone who had paid to join a weekend of guided paddling organized by a well known outfitter. It was also apparently loaded with a significant portion of the owner’s gear.

Per usual the highest tide in the cycle had come in overnight, when people were in their tents. And it was a pretty high max - as fully predicted in the US Harbors tide chart for a nearby harbor.

Here is the question for entertainment. The owners of the place tell everyone who rents to always tie off the boats they have borrowed. The high tide was predicted on charts that anyone familiar with sea kayaking should have been looking at. While it is likely the person whose kayak went missing did not understand the height of these tides, they had paid monies to be guided by an outfitter based in Maine.

So was it an unfortunate act of Ma Nature, the outfitter’s responsibility, or the kayaker’s to know those tide charts and make sure the boat was tied off to protect against not knowing that shoreline well?

I found myself disagreeing with some on this one as we talked after. I weighed in on the side of greater personal responsibility. My husband and I started out in cheapo toy rafts and then Swifties, but missing the tide like this was a mistake we never made.

Yes, but it makes so many good stories when things go wrong.

Tides are what makes the NW Coast so difficult. That and the cold water, the weather and critters and remoteness. Otherwise it is great paddling country.

Thanks for sharing your misfortunes. A great reminder for the rest of us to stay vigilant.

We managed the AMC camp over in Knubble Bay from 89-2001. Very common story; losing a boat to a 13 foot tide ( tides range from 11 -24 feet in Maine) The renters were advised twice. In writing and over the phone. Some of them never listened. We guided trips too and learned that there was always one not listening during the safety briefing. Hence off boats went solo sans paddlers down the Sasanoa River through Goose Rocks Passage where they were often found by the CG out of Boothbay. Heck we also had kayak hitching posts at base cabin and also Beal Island. How did paddlers miss those?

We rented canoes during those days and the renters of those were particularly egregious in ignorance. There was one marked DO NOT PADDLE and set aside away from the others… We went to check on camp… Sure enough DO NOT PADDLE was out on the water.
You never can be sure the eyes and ears are engaged. So I agree that it is personal responsibility.

But our first trip to Wheat Island near Isle Au Haut we brought our boats up on the rock above high tide line. We were Maine enough savvy then even though we did not yet live there. Our lesson was coming. We were cooking dinner near our tent and looked over at our kayaks nicely up on the rock… With four feet of water now between us and them. We had not followed the high tide mark all the way around the rocks!