With all of your valuable advice and assistance, I was able to securely transport my Old Town Cayuga 110 on my factory-roof rack on a Hyundai Santa Fe. I even felt good about it!

Fast forward a few days… Now I have TWO kayaks. Both are Old Town sit-ins and are 10 feet and change. They will just definitely not fit lying side by side on my roof.

My gf bought a Malone J-rack for $180. Of course, you can only put one kayak in a set of 2. The owner of the store, told her that one kayak can go in the J-rack and the other can be strapped down on the roof rack next to it. I’m not entirely thrilled with that suggestion. I’m 5’3" and she’s 5’4," and I’m trying to figure out the best way to load 2 kayaks on my roof.

I’ve been looking on Amazon and I’ve found some foldable J-racks are about half the price, which are reviewed very well. I’m not sure if it’s something to consider. Has anyone used non-Malone/Thule racks?

I live in an area where there are lots of rec kayaks in the 10’ and shorter range getting moved around and it is very common to see two sets of J hooks on a rail setup and two boats going down the road on some small cars.

I also watched a couple try and load them up like that a week ago and they were clearly struggling with the setup. We have a 14’7” OT canoe and a 10’ OT kayak similar to yours and my DIY rack is only 4’ wide and it is good for one or the other. When we haul both I made a extension wider bar I quickly bolt on and it hangs out over both sides of our little KIA Soul and holds both with cam straps and bow and stern lines. I have had it going 60mph and it was very secure, but I normally don’t go that far or that fast. We got ours loaded and were out of there before they even had the first one strapped down. I have no idea if they knew what they were doing to be honest it just seemed the boats on edge were very high and they were having trouble reaching things.

We stopped for ice cream and there was a car with two on J hooks and I wanted to go find the driver and tell him they were going to fall off with the crazy way they had the straps around the boats. She told me no its not my job to be the boat police.

The only thing with extensions is you have to be careful not to smack your head into them. We leave the car at out take out spot and I was worried someone would run into them so I made the ends round and smooth and painted them blaze orange.

They are long enough to haul 2 canoes. I will post a picture.

That’s how I solved the problem for us and I have seen as many as 5 rec kayaks piled on a roof and straps running around the pile. Have also seen pickups with too many to count piled in the bed. 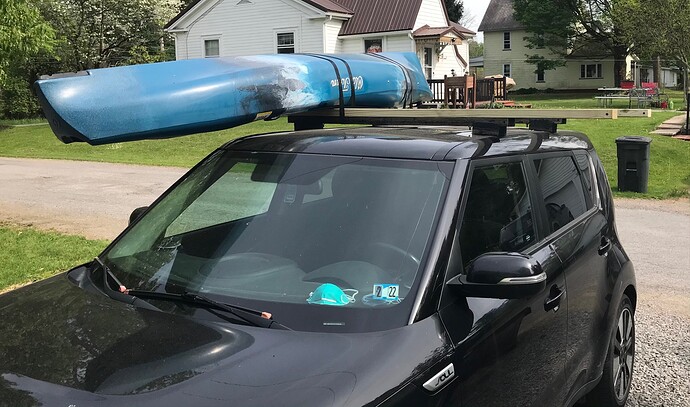 How do you have the lumber bolted down and is it bolted down onto the factory rack of your vehicle? Interesting setup!

I made the lower black rack out of pressure treated wood and painted it black. The Soul didn’t have rails but there are little plastic covers you snap out and under them are four 6mm thread holes I used to attach it to the car.

Why spend big bucks it only cost me 20 bucks to make. The long bars go on and off and each bar is held to the black rail with two 3/8 bolts. I counter bored the holes so the heads didn’t stick up. Putting them on takes less than 5 minutes.

I use 12’ cam straps for the kayak and 15’ for the canoe. Then I have loops under the hood I pull out for the front lines and a DIY thing for the back that I slam the hatchback on. I will post a pic of that.

i’m sure you could add extenders to your crossbars somehow.

Nice thing is if I need to buy some sheets of plywood I can strap them down as well.

When I take the boats off I leave the cam loop straps on the bars and take the extra strap and put it in the back door and close the door on them. When I lock the car the straps are still wrapped around the rails but are locked up. When we go to load the boats up I lay two of the straps down the windshield and onto the hood and two of them down the back of the car. Set the boats on the car and take the loops up and over the boats and around the bars. She does her kayak and I do the canoe. Then a cam strap from each bow and each stern to the loops and we are on the road. All the gear goes in the back seat.

With two people and two boats we each grab an end and lift them up sharing the weight. We are fairly tall I’m 6’ she is 5’10” so we don’t have a problem. If the car was higher or with shorter people a couple milk crates would work. Get the real ones not those dollar store look-alikes that break.

When I go alone I made a rig to help with the 80lb canoe.

With two sets of Malone SeaWings, you can carry your boats side by side, hull down. Much easier to load and unload than J-racks.

And just toss a small step ladder in the car. It’s always a good idea to have it and it makes life easier for car-topping.

Many shorter people with a taller car find J-racks more difficult to load then saddles, as these don’t usually have the various load assist options that can be used with an add-on rack system. If using factory crossbars, you also have to keep in mind the load limits, which may be exceeded with two boats.

Although financially painful, the best solution may be quality add-on crossbars with saddles. The crossbars are available in numerous lengths and mount to most factory rails… 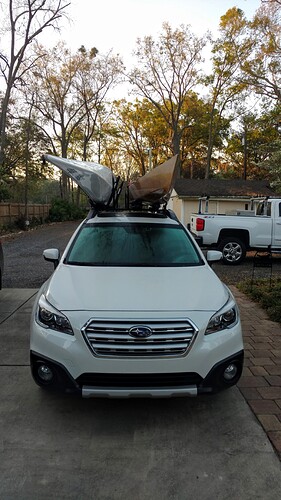 Approach the car carrying boat about 45 degrees to car. Put the boat on the back j rack , push stern down, swing bow into the J-rack. Of course your 10 is a little short it might not over hang much.