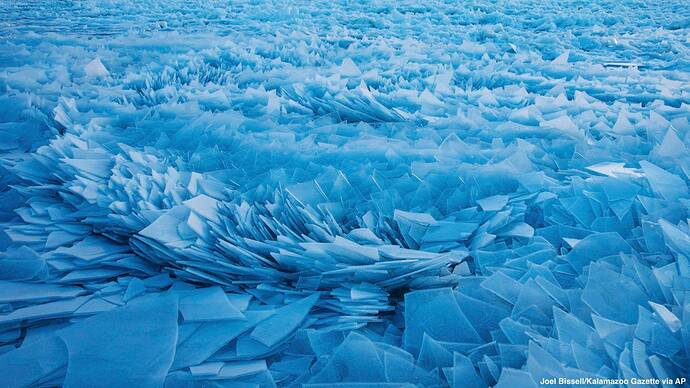 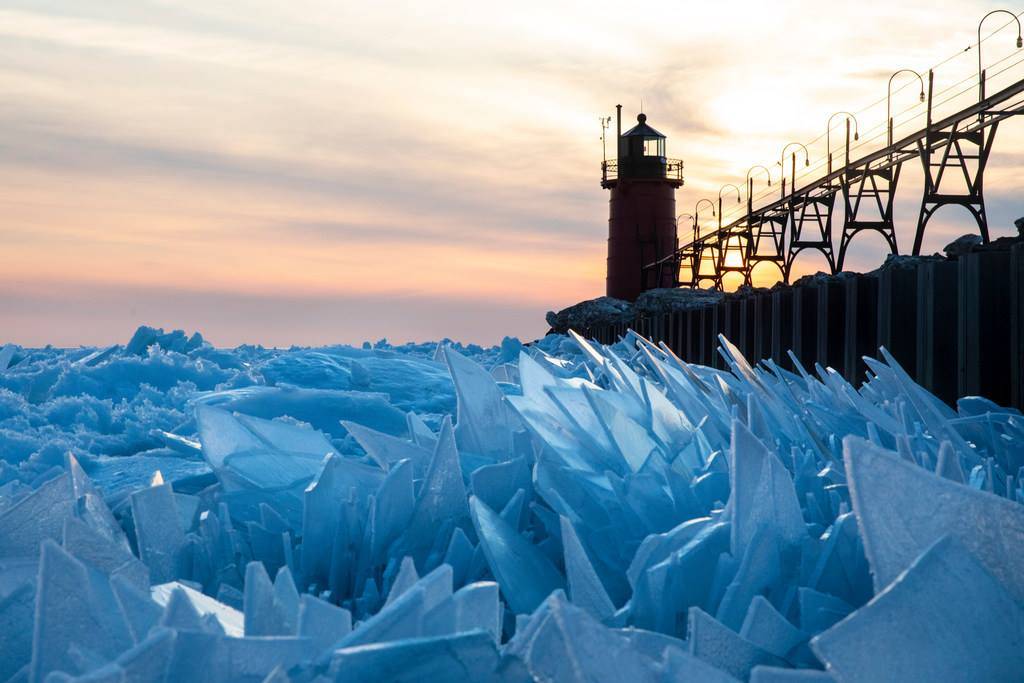 Using a filter or photoshop to get the blue color?

Maybe they should have had the icebreaker paddle from the other thread there?

I snagged the pics from an AP news site (Kalamazoo Gazette) so I have no idea what filters might have been used. But I can recall seeing ice that intense of a color blue along Lake Michigan at twilight (lived near the lake for 8 years.)

Because the sun sets behind the lake directly west in line of the dead flat I-96 corridor on which I used to commute to work from Grand Rapids to Muskegon and because I would sometimes drive out to the beach to watch the sunset before heading home, I got to see a lot of spectacular light refraction displays year round, from blood-red and purple sunsets (some of which made the lake waters look like molten gold) to intensely saturated double rainbows and even the legendary “green flash”.

I’ve lived in Norway where I’ve seen lots of wierd ice patterns on fjords and rivers - the blue color is something I have not seen before but believe it would be possible with the right angle of sun and sky coloring. I suspect it was just done by augmenting the blue color intensity in a digital photograph, still looks cool though. I lived in Michigan for five years and every year I visited lake michigan or lake superior in winter they were always massively gray and white and very lonely, nobody at all around the ice piles. The ice formations on the great lakes can be trully amazing. I’ve also seen the green flash but only on the surface of the water in a kayak. People try to see it here in San Diego all the time, but I have seen it reproducibly near winter solstice sunsets, somewhere I have a video I saved.

Plan to drive to my favorite launch site on Saturday (Sturgeon Bay) in the hope enough ice has come off the beach so it’s walkable. Always fascinating to see how the power of water and ice changes the landscape.

Wow. That is awesome!

Grand Haven is one of my favorite places in the midwest and is where I would move if I wanted to move back. What a fun and quaint little beach community. All of western and northern michgan is on my top 5 favorite places in america. The Grand Haven river mouth area is super cool and very unique. Also gets some pretty epic waves

West Michigan does have fantastic beaches and lakeshore. Unfortunately, I found I could not tolerate living there (even though I have deep family roots in the state and spent my summers with Muskegon grandparents when I was a kid – a park in that town is named for my grandfather and a street for my late uncle, a World War II pilot who died in action.) The pollution is so bad throughout the state and they have so little regard for their incredible coastline, plus the social and political backwardness, clannishness and antipathy to “outsiders” makes it a very unpleasant atmosphere. Too many sanctimonious Republicans and phony “Christians”, a lack of diversity and widespread intolerance. I found it ironic that so many people I met in West Michigan considered me an “outsider” and were so resistant to friendship as a result, when both sides of my family went back to the early 1800’s in the state – our clan has a Centennial farm near Williamston dating back to 1832. During the 8 years I lived there, from 1996 to 2004, the only friends I found were other “outsiders” like me who had moved there from other states or eastern MI.

I loved kayaking when I lived there but mostly had to do it alone. Several summers the beaches were un-usable due to either coliform pollution (from the BilMar foods Mr. Turkey plant near Holland) or to the massive alewive fish die-offs. And Muskegon, which has some incredible beaches, has much of their lakefront and harbor made disgusting by industry, coal fired power plants and the vomitous stench of paper pulp mills. Most struggling towns of that size would kill to have such an amazing geographic feature as that lakeshore, yet Muskegon has historically failed to protect it or effectively cultivate it as a tourism gem. Of course the frequent lousy weather is a problem, but that has not stopped places in other parts of the country from profiting from a coastal location. Muskegon is, and always has been, a depressing dump.

@willowleaf said:
West Michigan does have fantastic beaches and lakeshore. Unfortunately, I found I could not tolerate living there (even though I have deep family roots in the state and spent my summers with Muskegon grandparents when I was a kid …

LOL. I was born in Muskegon. My grandparents lived there. My parents fled to the eastern side of the state, ultimately to Ann Arbor (an evil town where everyone is going straight to hell). I found my Dutch Reformed relatives to be a real trip. The first thing they would ask me when we visited was, “When was the last time you went to church?” Seriously! Not, “How are you?” Not, “You’re looking great!” They were a social group that needed the teachings of Jesus the most yet exemplified it the least. But then, these are the same folks that brought us Apartheid in South Africa, so yeah. (I shouldn’t slam a whole religion but my “Hollander” relatives were truly racist and narrow-minded. And they were not atypical. It was my Swedish relatives that knew how to let loose and have fun.)

Michigan does have great natural beauty and I have many wonderful memories growing up sailing on the inland waters and Great Lakes. I’ve relocated to the Pacific Northwest with no regrets (nor bitterness) and traded sailing for kayaking.