I’m going to be on the Virginia side of the Potomac, near the Coan River, for a week in early May and wondered if people have any suggestions about favorite places to paddle or any recommended day trips in that area or in Chesapeake in general.

We’ll have dry suits but also curious about what people wear usually on trips–the water looks like it will just be on the cusp of wetsuit season.

I grew up on the Bay. We were young and hearty and started swimming in early May on warm days. It was cold but tolerable. You could safely use a shorty wet suit or Farmer John if you are paddling near shore. We used to camp on islands a lot.

I grew up on the bay too and we were water skiing in May in cutoff shorts. The water in the creeks is shallow and warms up fast, but it might be a little chilly in deep water. My concern in the spring would be power boat and Jet Ski traffic, so make sure you are visible.

The Coan River is pretty, and has a marked public put-in. Probably the Yeocomico, the next small river off the Potomac to the west, is good too. My favorites are the Little Wicomico and the Great Wicomico. You can put in the “Little River” at the Smith Point Marina at the end of Smith Pt. Rd, near the mouth of the river, and then paddle upriver or across the river to Krogh Island, a state owned peninsula, really. Good beach for a picnic plus a swamp and woods to explore on foot. Upriver they’d probably let you take a break at Cockrell’s Marina. Careful around the main channel that goes out into the Bay; many powerboaters are careless of small craft. The Potomac itself is big water and can be tricky with storms coming up quickly, though that’s more in the summer, and when the current and tide are against each other that’s not fun. But I’m a pretty conservative paddler. I know of two places to put in the Great Wicomico. There’s Cooper’s Landing at the end of Cooper’s Landing Road, and farther down the creek, a put in and fishing spot on the south end of Tiper’s bridge. If you want to put in near the mouth of the river, there’s Ingram Bay Marina, very nice people there. You could explore the Dameron Marsh from there.

Thanks for all of this great advice! Are there any outfitters or guides in area that people recommend too? Might want to work on rolling while in the area if water is warming enough.

Also curious how paddling the Potomac compares to the Hudson, which I’m familiar with. It sounds like in the summer it is more temperamental.

A lot of information about the Chesapeake can be found here and specifically for the Coan River here.

As the Potomac is over 7 miles wide around there and the Chesapeake Bay over 30 miles wide, kayaking in open water is more like paddling in the ocean with huge fetch. Ocean going ships have sunk in storms. On warmer days pop-up thunderstorms are not uncommon and weather can change rapidly. A VHF radio with weather alert is advised. As with many near coastal areas, the winds can build during the day.

I’ve paddled quite a bit on the Maryland side of the Potomac and the Maryland Chesapeake Bay in that area, including Smith and Tangier Islands, but have not paddled the Virginia side where you will be. A bit of a long drive for me for a day trip. However, that area is not overpopulated and the rivers look like they will be very nice.

For an example of paddling on the open Bay in that area, the majority of paddlers going to Smith and Tangier Island take the ferry from Crisfield, MD across to the islands with their kayaks. It’s considered an advanced skills paddle highly dependent on the weather and tides.

That tides4fising.com site great. Thanks for sharing!

Thanks RStevens! All of this is super helpful.

Do people tend to stick to coastal paddling for the most part? We were thinking of primarily hugging close to shore so we could explore all of the smaller tributaries and inlets on the Virginia side, instead of doing any crossings but maybe one day we can get up early and drive to the Maryland side to do the same there is you have any recommendations.

I used to paddle the upper Eastern Shore quite a bit from the Bohemia to the Wye and rarely ventured into the main Bay. The rivers and creeks are much more interesting and you can literally spend a lifetime exploring them. A friend I paddled with had a rule that we had to go up any creek until we ran out of water or couldn’t turn around.

We traverse the mouth of the Potomac in our bigger boat frequently and as others mentioned, it’s wide and any wind against current creates a really nasty chop that is very unpleasant in our boat much less a kayak. Anywhere on the Bay when wind hits around 15 knots and up there is likely steep three foot, short period waves.

Somewhere off the Chester River: 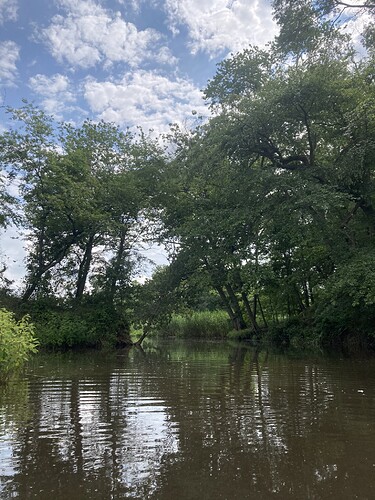 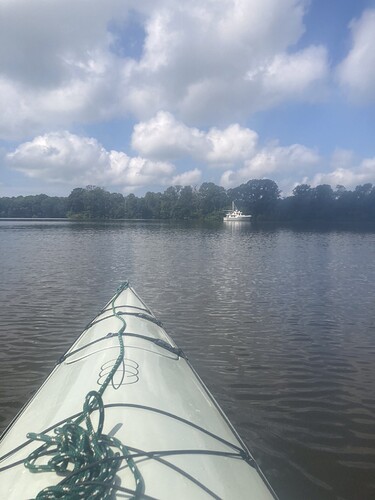 Are you back from your trip yet? Would love to hear a brief trip report.

The shoreline is where the interesting things to see are.
Terps are looking good in the NCAA Lacrosse Championships. It makes me think of MD all the time.