It has been a crazy winter here in southern New England – it’s the middle of February and nothing is frozen. Last weekend the forecast was chilly on Saturday, but warming on Sunday, so Sunday was the day to paddle. Fortunately, I have a couple of friends that I can always count on to join me. We wanted to stay local so we decided to paddle the Providence River through downtown Providence, RI.

We put in at the Bold Point in East Providence and headed out across Providence Harbor towards the Fox Point Hurricane Barrier. The water was calm with just a slight hint of wind-blown waves. Rounding Fox Point and entering into the Providence River we passed some tugboats before paddling through the hurricane barrier. From there it is a pleasant urban paddle. Walkways line the river through Providence, and there were a fair number of people out and about, but we were the only ones on the river.

Me and Bill, and another view of the Providence skyline 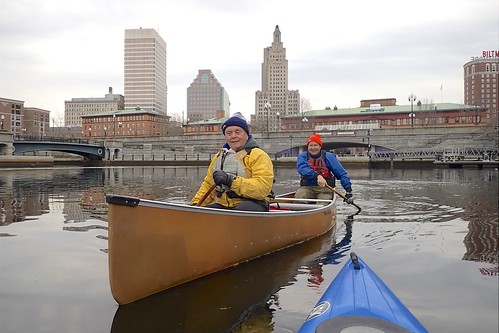 Can’t compare with the Hudson or East River around Manhattan, but still a nice city paddle. Few more pictures here:

I imagine it would be cool to do that trip on one of the Firefest nights! The bike and walkways, as well as sitting areas, downstream of downtown and RISD have gotten much improved when I was down there a couple of months ago. I stayed at the Hilton at India Point Park and pretty much kickscooted my way around town on the bikeways the whole weekend. I am looking forward to biking the East Bay Bike Path again, now that it is connected to India Point (and the hotel) with the new bike bridge.

I imagine it would be cool to do that trip on one of the Firefest nights!

I’ve never heard of anyone paddling there during Waterfire nights. There is one night that people paddle around with lighted fish mounted to their boats, but they pay for the privilege.

The bike and walkways, as well as sitting areas, downstream of downtown and RISD have gotten much improved when I was down there a couple of months ago.

The Riverwalk is nice, and the RISD campus comes right down to the river now. They are almost done with the new pedestrian bridge across the river that sits on the piers from the old I-195 bridge (you can see it in the top picture above). $2M bucks, but hey its only money. At least our taxes are not subsidizing the PawSox baseball stadium.

I stumbled onto Waterfire one night when I went down there to have dinner with a friend. There were performances by RISD, art displays, etc. Then a boat came down the river, lighting up the intermittent piles of wood on the stands in the middle of the river. Saw the folks going up and down in the gondolas. Was thinking I would much rather paddle myself. Too bad if that is banned. But, probably makes sense. I imagine and idiot in a paddle craft, getting too close, catching fire and needing a rescue! LOL!

Investments in pedestrian and bike infrastructure get poo-pooed by car-oriented crowds, even though enough studies have now show that these infrastructure approaches not only improved the quality of life for those living in the cities but actually generate more economic activities and benefits.

Speaking for me, I go down to Providence for weekend get-aways (if no surfing is available). I rode the length of the East Bay BIke Path a number of times, kickscoot/walk around the city, see the shows at Trinity Rep and have had some great dinners out. I actually enjoyed the city’s changes over the years. It was a much difference place from when I was teen and regularly do down to compete in MA and boxing comps (then, Providence was better known as the home of the New England Mafia).