I’ve been trying to get clean resin lines around my fiberglass patches by taping the perimeter with blue painter’s tape.

When I try to lift the painter’s tape after the resin has cured, however, there’s a tendency for the entire resin sheet to lift as well, unless the painter’s tape rips first. I messed up a major repair somewhat by getting air under my patch so that I had to patch the patch.

After that mistake, I tried using a utility knife to cut the resin along the painter’s tape edge, but that is difficult to do and easily gouges the boat.

I could lift the tape before the resin is cured but that implies lifting the peel ply that sits on top first without leaving an uncured mess on the patch.

Any tips or tricks?

After you have finished the patch use a piece of stiff plastic , (like overhead projector film or loose leaf page protectors) and tape it over the patch. Get it as tight as you can. The next day peel it off. Don’t worry about it sticking to the epoxy. It will come right off and if you did a good job there will be no or very little sanding .

I think Jack has the right idea, but I have to wonder why you’re able to lift the resin from your repair. It sounds like you aren’t getting very good adhesion to the original surface.

Rather than trying to peel off the tape down its length, try first lifting the tape at the side opposite the patch, then peeling it up in a lateral direction until you get to its edge. If there are any thick overruns of epoxy or any fiberglass fibers overlapping the patch, you may still need to cut them with a sharp knife, but I find it is sometimes easier to do so this way without scratching the hull. Using transparent plastic is just an alternative to using peelply.

Why do you want a sharp edge in the first place? Typically, you want to blend the patched area into the existing surface.

bnystrom: I tape the perimeter in order to avoid long resin runs down the hull.

There are plenty of other applications in which a sharp and smooth edge to your epoxy/fabric line is desirable, such as when applying abrasion plates, keel strips, rub rails, etc.

I use tape to mask the surface too, but whether it comes off cleanly or not is irrelevant because I’m going to be blending the patch into the existing surface. Any tape edges that tear off will be removed when I scrape and sand to blend the patch.

For things like keel strips, score along the edge of the tape when the epoxy is still “green” and it will leave a clean edge. With epoxy, you can use the green plastic painter’s tape rather than paper tape, which is stronger and makes it easier to get a clean line. I don’t think it will work with gelcoat or polyester/vinylester resin, but I haven’t tried it.

@bnystrom said:
I use tape to mask the surface too, but whether it comes off cleanly or not is irrelevant because I’m going to be blending the patch into the existing surface. Any tape edges that tear off will be removed when I scrape and sand to blend the patch.

I agree that applying a same-color patch as shown in your nice online tutorial doesn’t need sharp resin lines since it is blended into the hull.

I’m not sure I want to wait to apply the peel ply till after the epoxy has gelled a bit…I think next time I’ll just carefully peel it back just enough to fully expose the painter’s tape, then peel the painter’s tape off for a clean resin line before finally pressing the peeled-off portion of peel ply back down.

I’m finally getting around to posting some pictures: 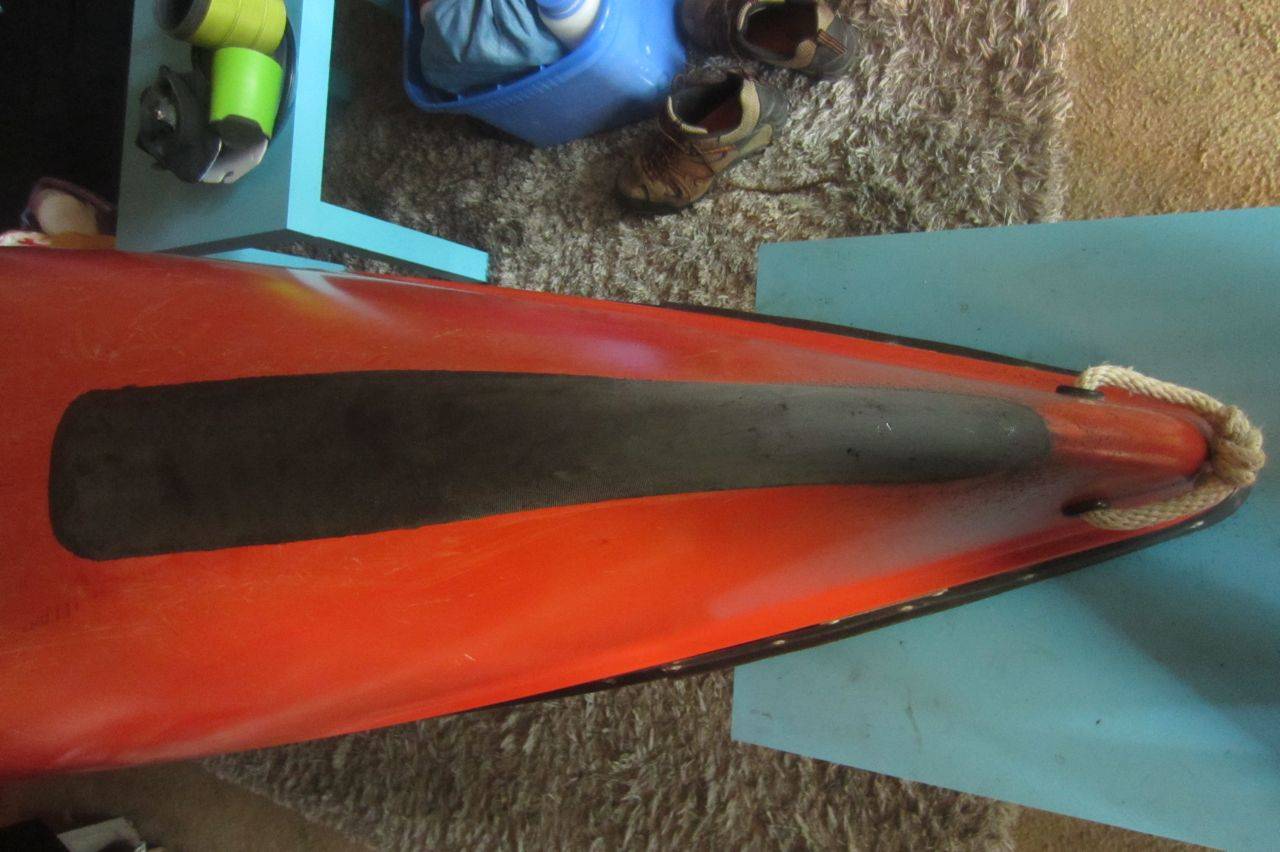 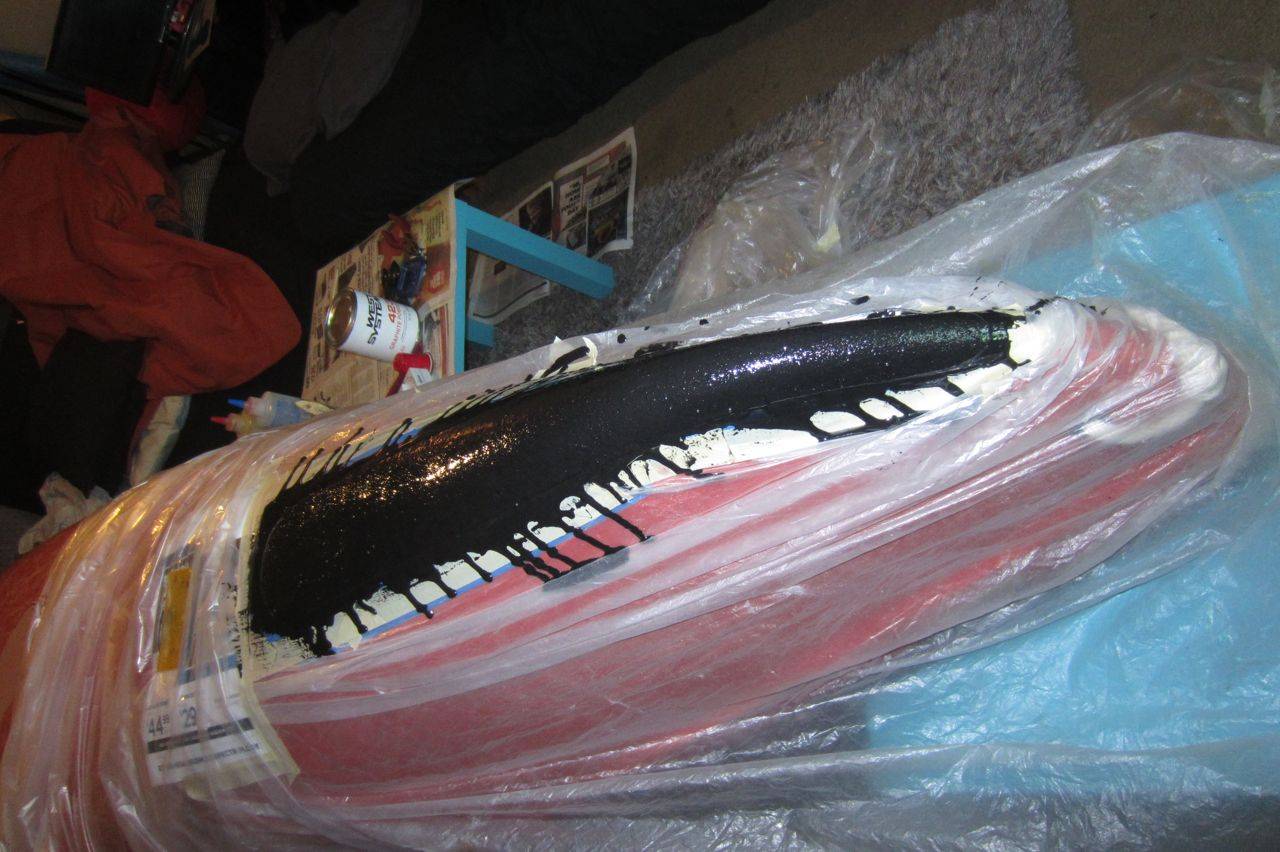 I mixed resin with graphite powder but not black pigment. I pulled the tape about 2 hours after applying the resin rather than the next day and got clean lines but had to watch out for gooey black resin threads that didn’t want to let go of the painter’s tape. I then applied the peel ply afterwards, again watching out that no black resin went outside the boundaries. Pulled that the next day.

I had to sand some afterwards as the resin seemed thicker than normal and didn’t quite level as nicely, probably because of the graphite powder.