Close encounter with a cormorant

So I’m paddling on the Paw Paw river and I go around a bend and as I’m paddling along I see something come up to the surface right alongside my canoe. I assumed it must be a fish or turtle but then saw it was brown and furry so figured it must be some kind of mammal. Then before I even realized that the fur was feathers it just rose up out of the water and flew away. I really appreciate close encounters with critters.

Snake heads or vampire birds - there are lots of them down around Point Judith (RI) where I go for vacation. 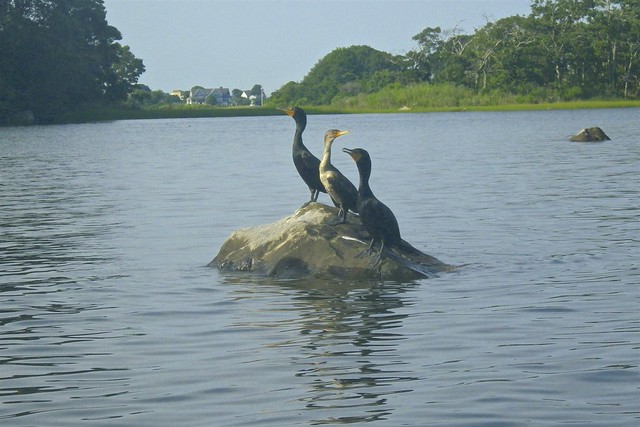 It is something to see them take off from the water - it is almost like they are running on the water until they get up in the air. 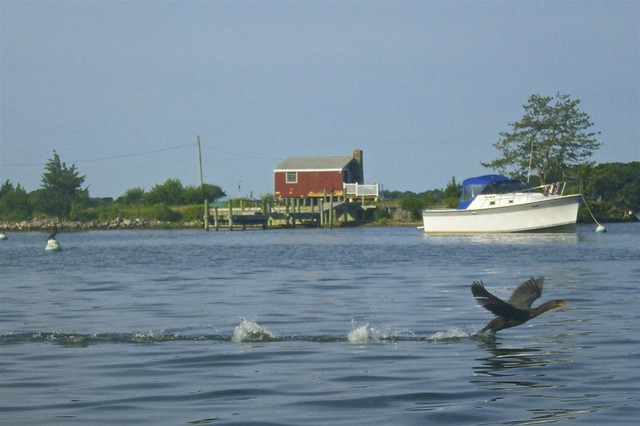 This one photo-bombed my picture. 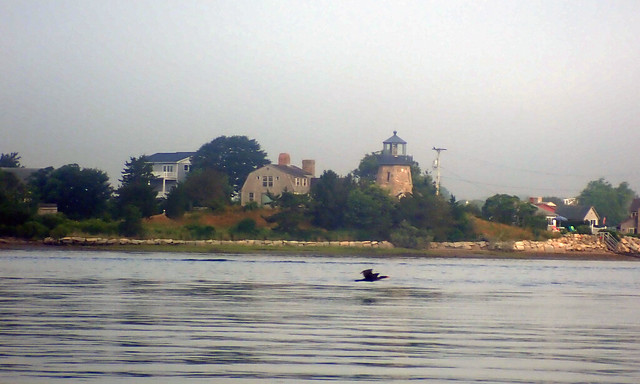 Visiting the rocky and boulder studded lairs of the ocean cormorant flocks offers quite the malodorous experience. Not recommended for those who are olfactorily sensitive.

Offers an additional challenge for the paddling “rock gardeners.”

And never paddle underneath a cormorant

The rock in my first picture is white for a reason.

I have seen a large gulp (flock) of cormorants in flight on Lake Marion, SC while kayaking there. The photos are just a portion of the total number that flew by. 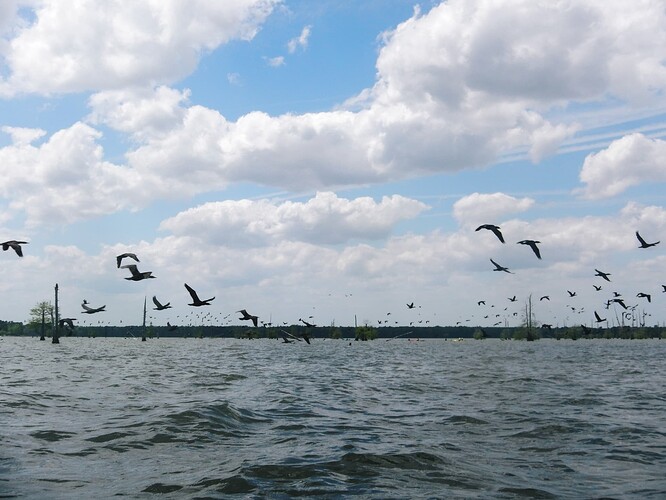 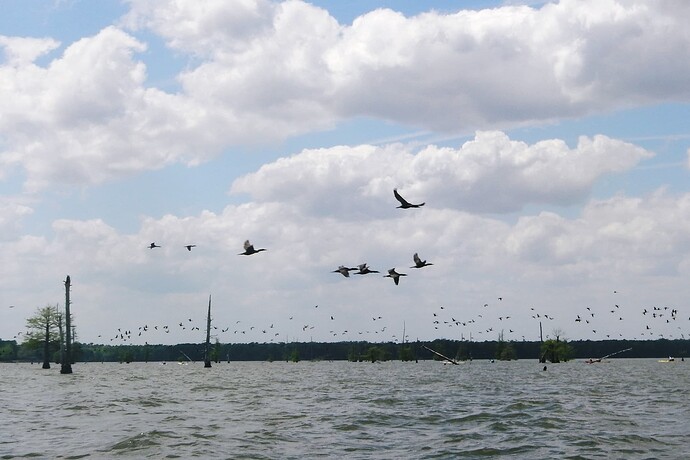 Growing up in Florida we called Anhinga’s Snakebirds because they swim with just their head and neck out of the water. They don’t have an oil gland so have to dry their waterlogged feathers after swimming. 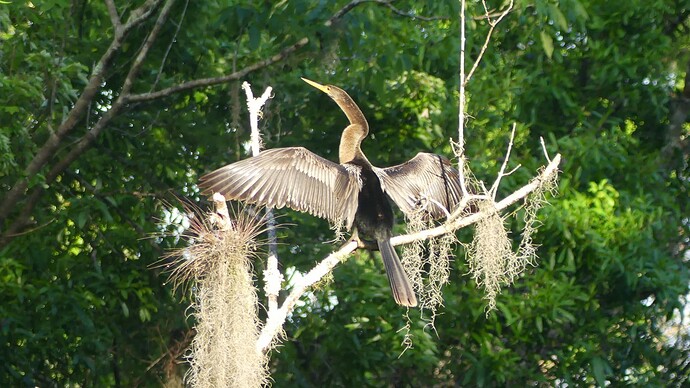 A large flight going somewhere else. 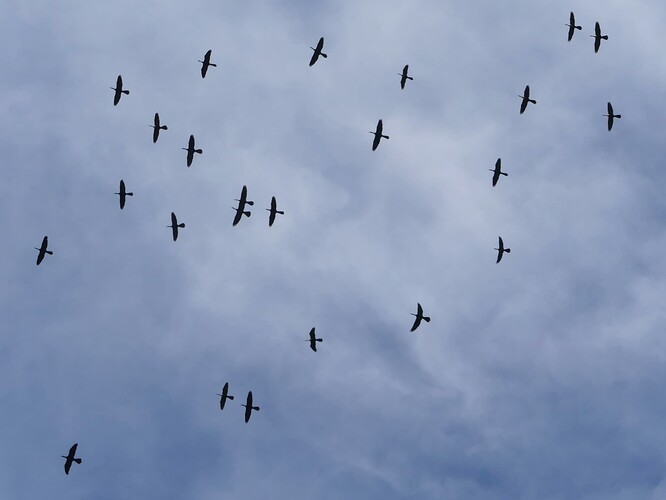 Here in St Pete there is a group of cormorants around Fort Desoto and Shell Key Preserve that have learned to follow paddlers in shallow water to catch the fish that the shadow of the boats scare up. It’s pretty cool to watch them and they are quite successful, often coming up with a fish. Unfortunately for me, I paddle too fast and they have to fly to catch up with me after every dive which is startling when they suddenly plop out of the sky right next to or in front of my boat. I’ve had them land almost within touching distance. They aren’t the most graceful in the air.

Just a point of interest, both cormorants and anhingas are in the same family of birds, so are related, as you might expect looking at them.

Cormorants and anhinga rest on several high power lines above a wide bayou where I paddle occassionally (and water skied as a youngster). One learned early in life not to do anything to cause the 25 - 200+ birds to go into flight as they would release causing a messy, carpet bombing event. It only took once as a teenager many, many years ago to learn that lesson. Luckily they missed that day, but not by much.

One learned early in life not to do anything to cause the 25 - 200+ birds to go into flight as they would release causing a messy, carpet bombing event.

Wow. Not a pretty mental picture.

My Dad and I were on the Cooper River near Charleston in his power boat. We encountered a huge raft of coots. Just for fun he drove through the raft. All the birds took off and were flying a few feet above the water.
He had his face above the windshield when one in front of us cut loose. He got a face full . I thought it was really funny, he didn’t.

Thanks for teaching me that a group of cormorants is called a GULP! I love that.

I too enjoy learning the group names for animals. I think the names are kind of fun. Here are a few others I can remember off hand.
Pelicans= squadron or scoop
Geese= gaggle
Turkeys= rafter (They do like to roost together in trees)

Thanks, those are all good too, but I think gulp still wins!

Some call them Water Turkeys. It’s not because they’re good with cranberry sauce and pumpkin pie.

and never paddle behind a rockbound cormorants…explosion of an expulsion, not hip nor hop, but cormorants rap to “guano rock.”

Karma is a facefull…

The cor
mor rants
with lack
of pants

And many crowed, “It’s Murder out there!” 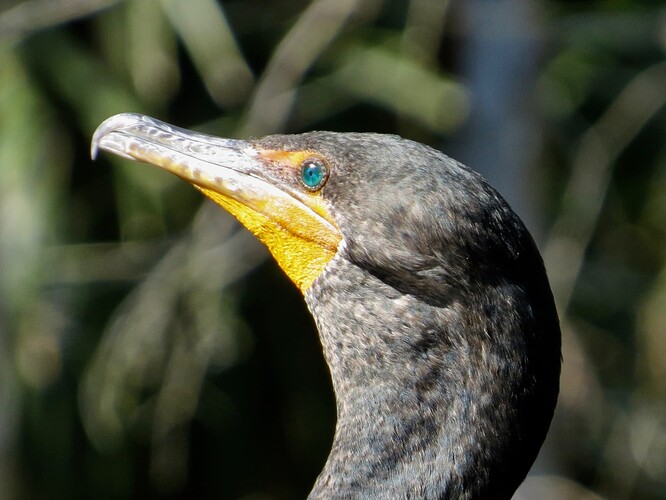 Before a tanzanite eye
menhaden many from school try,
to flash away from flying gem
that draws its bead with beak on them.