Color considerations for canoe - any thoughts?

I’ve been sea kayaking for decades. My two color considerations are (1) aesthetics and the emotional impact looking at the deck (which is why I like a nice vibrant blue) and safety/visibility which is why I would consider bright red or something along the lines of coast guard/tern orange (I have mostly gone with the former with the exception of deck seam and relied on high-viz PFD and apparel for the latter). I am now considering a canoe (well, a pack boat actually which I guess is a bit different). I mostly won’t see the hull and there is no deck. And I don’t think high-viz is as much of a consideration as I mostly wouldn’t be using it in big open areas where I would want zipping-about motor boats and PWCs to not run me over, and the coast guard to find me as quickly as possible if it were to come to that. I am wondering if there are any wildlife considerations. Like, do deer or ducks or moose, for example, react sooner or differently to bright red vs green watercraft (two of my 3 choices - the other being black [carbon fiber]). Should I just go with what I like the looks of the most? Appreciate any thoughts. Thanks.

I would not worry about color for wildlife. Ducks are going to react to glare and movement. Your face will stand out more to a duck than your boat. As will the flash of a wet paddle. Moose have poor eyesight and use hearing and smell to their advantage. Deer have all kinds of crazy eyesight pros and cons but are still considered to have poor vision. (they see dark color better than bright)
Visibility to the human animal would be more crucial.

It’s mostly aesthetics. There is some point to having a contrasting / very visible color if you might find yourself inadvertently separated from the canoe in a remote location. Dark green might not be the best color in that situation. That said, my tandem wilderness canoe is Dark Green.

I’m opinionating here from personal experience. When I want to be found, I want to be visible. When working in the wilderness, our canoes were always yellow. If we were to be the subject of an air search, any dark colour (even red), would be detrimental. I’ve noticed that some manufacturers now offer a two-tone canoe, with the hull bottom being white. My own canoe (Swift Mattawa) is off-white and my kayak (Riot Edge) is a mixture of hi-vis colours.

Yellow is the most visible color at sea.
Red or bright white shows up readily.
Dark green makes boats disappear. It makes them hard to find under water.

I may be playing the contrarian role here… but I agree, its largely a question of aesthetics. And aesthetically I prefer a canoe that doesn’t say FU right in the eyeballs. I think a canoe, or a campsite for that matter, should look like it fits into its environment. Dark greens, reds, blues, even battleship grey blends into the environment. Canary yellow or insignia white, not so much. A camp or a canoe shouldn’t look like the circus has come to the north woods and being visible from sky lab isn’t a desirable thing, in my opinion. But camo is going too far.

If there were any remote possibility, as in sea kayaking, of possibly needing to be rescued on big open water by a helicopter or CG cutter or something, sure high vis is desirable. But that’s not at all a likely scenario in a BWCA lake situation or on a river - the kinds of places a canoe is usually used. You could be treading water for a long long time before someone even thinks about maybe even needing to rescue you. By then the color of your boat doesn’t matter. If you want to be found, a chartreuse vest, a smokey campfire, flares, a bright strobe light - something like that is more what I’d want to count on to attract rescuers.

Tradition plays a role in aesthetics, too. A friend of mine had a wood canvas canoe re-canvased by a Canadian (I think) boat builder. The builder asked what color the finished project should be painted. My friend asked what the builder would recommend for a boat of that type and vintage.
“Well,” the rather taciturn builder replied, “Some folks like red canoes. Others prefer green.”

For many of a traditionalist bent, there really aren’t a lot of other colors to waste time considering.

…being visible from sky lab isn’t a desirable thing, in my opinion

This made me laugh out loud - which dated both of us, I think. Thanks for the chuckle…

I’m fond of my typical dark green canoe. My goal is to blend in not stand out. My PFD is the one exception.

If you paddle big water their are power boats around. There can be ships and bad weather and fog. Bright colors can save your life.
On a river paddling with other people, especially big rivers, it is much easier to keep track of other boats if they show up instead of blend in.

I want my camp to have some bright colors so I can find it after going out hiking.

Some people seem to live in crowded places and talk about stealth camping. It is natural for them to want to blend in.

I mostly backpack and boat camp where there is no one around, so I like bright colors. Easy to see from the air and the water.

everyone knows that red is always faster. red cars are faster, and so are red canoes.

Some people seem to live in crowded places and talk about stealth camping. It is natural for them to want to blend in.

Stealth living too - maybe someone thinks this looks crowded, but most don’t. 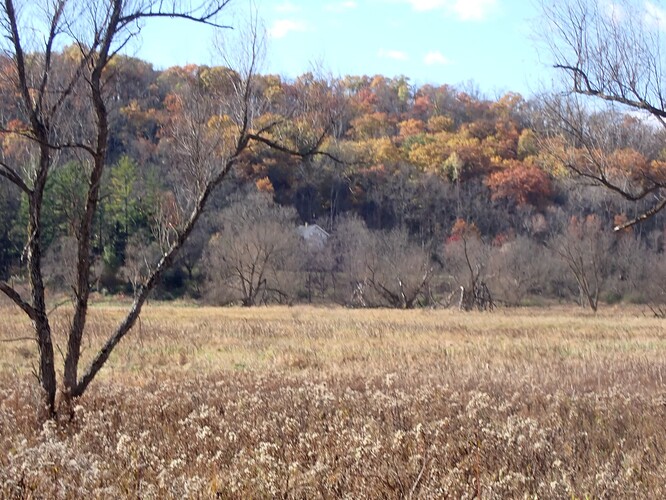 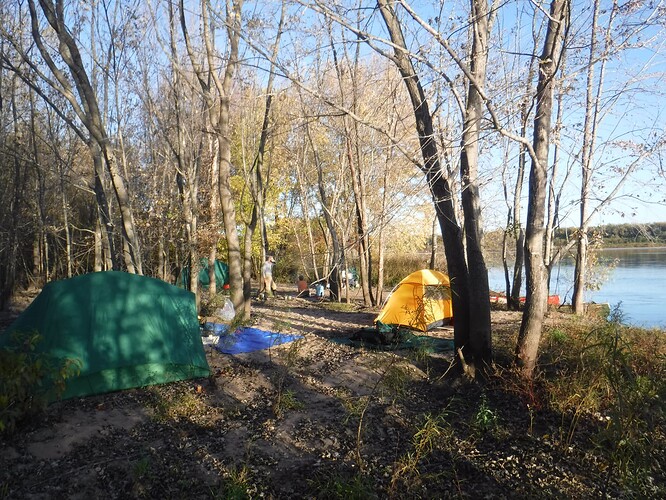 I’m getting older, true enough. I can’t always recall if its a sky lab or an international space station. I sometimes forget what I came into the room for, but thus far have been able to find my way back to my house or my camp simply by remembering where I left it. Maybe some day I’ll need a colorful visual aid to find my way back, but thus far I’m getting by without.

Red. Canoes should be red because forests are green and water is blue, so for the best “pop” in photos, red is the colour of choice.

That is a consideration that had not at all occurred to me. I ended up getting a carbon/kevlar boat that is basically black - looks very nice in person but probably doesn’t pop too much in photos.

If you can’t decide on a colour, there’s only one way to go:

Blue it make you camouflage to the fish.