What are you folks carrying for a compact vhf radio? 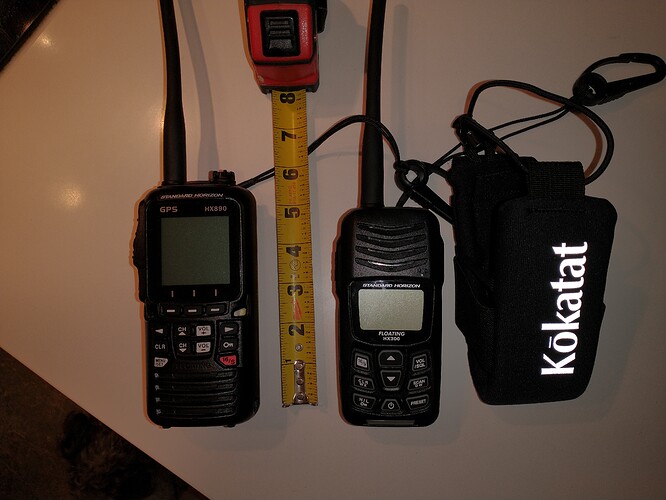 Thanks. Do you guys use them offshore and inland?

My use would only be inland

No more than ten miles offshore in boat. Kayak near shore.

Also during Symposiums (back in the day)

I’ve used a Horizon 270s for ~15 years. I think that I’ll replace it this year. Doubt that I’ll shop too hard. Probably get another Standard Horizon with similar features but probably one that floats.

Standard Horizon HX300 for me too.

It’s submersible, floats, works well, is relatively inexpensive and is rechargeable via USB so I can charge it from a wall unit, a computer, a car, etc.

When I carry one, it’s my Standard Horizon HX870. VHF/DSC and it floats. Not as compact as others, but it fits nicely in my Tactic Pack.

Note: the radio manufacturers do not want you to know this. They bury this information deep inside the user manuals. They put the big, dazzling battery capacity number in amp-hours out front where you can see it, but that number is meaningless unless you know the voltage.

I currently have two thanks to a bad packing job for Maine a couple of years ago. One is a Standard Horizon that floats and has a good submersible rating, other is an ICOM w same features, one has a DSC button and I think it is the Standard Horizon. But I would have to open the box to check. Note the one with the DSC button is also the most daunting to make work the way I want, in fact I also carry the other one for all day out because it is easier to set up the weather alert to work the way I am used to.

Neither of these do much of anything for me inland, cell phones there.

I have a Uniden Atlantis 155, one of the least expensive units you’ll find. It’s low powered at only 2.5 Watts, but we’re so low on the water in a kayak that I think we’re range-limited regardless of power. It’s a bit bulky but submersible, floats and uses regular rechargeable AAA batteries (no special battery pack) that can be charged in the unit. You can use disposable Alkalines as a backup.

I’m looking into getting a handheld for use around the Chesapeake. A lot of folks here seem to like the Standard Horizon brand. I was looking at a Uniden that was advertised with “water activated MOB”. Not ideal on a wet boat, especially if I want to roll to cool off. Is that a common feature I need to look out for, and if so is there usually a way to disable it?

I don’t do multi-day excursions so running out of battery power has never been an issue. Plus, I’m typically always within phone range, which would probably be my primary communications method. For me at least, the ability to recharge it from just about anywhere via USB (including from my car) without a special charger outweighs any potential power consumption disadvantages.

Standard Horizons has MOB you need to do it yourself. Floats and light goes on if in the water. I’ll always go with higher watts. I think my SH are 6 watts.

I wasn’t fully up to speed on the MOB feature. I was worried it was a “call out the calvary!” that would have the Coast Guard chopper hovering over me as I come up from a roll. Now I see it’s not that, and would be a minor annoyance at most if it was automated.

I’ve only done a casual google search, but it seems like most of what I came across are 6 watt radios.

Although the FCC recently relaxed requirements regarding shore based use of VHF radios, they are still restricted to ship to shore use only. They are not to be used like a land based communications device.