Does anyone have a way of illuminating a 70p compass?

It’s the standard Brunton compass that fits in the recess on foredeck of many Brit style sea kayaks.

Googling revealed there is (or was) a light kit available, but it may be old info as I can’t locate it online.

Compass "light"
If you can’t find the light kit, you could replace the whole compass. I seem to remember a lighted version. Or you could go techy and drill holes in your boat, mount a cool little cowled light on deck, run wires, mount switch & battery box, blah blah. My solution is not techy or cool. On the infrequent times I need a compass at night (doing a before dawn crossing, etc.), I duct tape a light stick (I prefer red for this) next to my compass. I put a strip of tape on the light stick so it doesn’t shine back in my eyes, only forward onto the compass. So it’s not elegant, but it’s easy, cheap, works fine, and doesn’t malfunction.

I Would Think…
a headlamp would be the easiest, least expensive solution.

Sylvania make a battery operated glow-stik (google it). Loop the tether around the deck line, then proceed to duct-tape-cover most (leave a wide slit facing the compass) of the light. Attach the light just aft of the compass with duct tape on the ends.

Works like a charm, and dual purposes another implement.

I have the same question as the OP and would like a more graceful solution than wiring systems or duct tape. This would be for a deck mounted compass, not a strap-on.

Don’t they make the old light that the OP referred to? May have to call Brunton…

Ahhh…it just occurred to me…the original lighting system referred to was probably for tying into a boats 12V system and not some super compact wireless kayak alternative.

Hmmm…there’;s the Silva 70UNE but it wont fit in my recess which is another requirement

Red light on my waterproof headlamp.

I have a light kit around here somewhere. It was sold by GRO back in the day. It doesn’t hook into any boat 12 v system it’s a self contained LED for a 70 P compass . It’s still in its package , I’ve never installed it, Instead Ive always used my headlamp. I also have a compass made by silva that came with it’s own light {red} but it fits in a mount that is screwed to the deck and not in the recess

That must be the 70UNE you have. I take you felt that the GRO light wasn’t worth installing? A headlamp works fine too, unless it doesn’t work at all. Ideally there would be a light on the compass you could turn on with the paddle for us paddlers, and have the headlamp for backup.

If you come across that GRO someday, post a pic of it. I’m curious what they look like. It probably wouldnt be hard to jury rig something with the wide variety of led’s on the market today.

@roym said:
I have a light kit around here somewhere. It was sold by GRO back in the day. It doesn’t hook into any boat 12 v system it’s a self contained LED for a 70 P compass . It’s still in its package , I’ve never installed it, Instead Ive always used my headlamp. I also have a compass made by silva that came with it’s own light {red} but it fits in a mount that is screwed to the deck and not in the recess

I had the GRO light in my hands a couple of weeks ago…not sure where it is right now. I put it someplace safe

if I find it in the near future , I’ll post it. I have several spare compasses. I have to go out to the shed , where I store them,to see what numbers are on the lighted one.

I got caught in fog one night while four miles out in Lake Superior. I hadn’t planned a night paddle, but did have a headlight with me. I used the light so I could see the compass. The problem was, I was totally blinded by the light shining into the fog. Total white out. I could have paddled into a buoy or anything else. Ended up just turning on the light for a quick look at the compass, then dousing it.

The point of the story is relying on a headlight to see the compass isn’t the best idea. Back home, I followed instructions similar to what Johnnysmoke posted. The resulting compass is illuminated with a red glow. It works very nicely and won’t produce night blindness like you will have if you use a headlamp. It’s not built in, so not what the OP is looking for, but I can read that compass at night, and that can be a life saver.

I think the red headlamp is better than white for night, but I’m not sure it would be any better in fog. You’d probably have a total red out.

I like that little led in the clip though. I wonder if that would work if mounted in front of a recessed deck mount compass. It might be possible to rig it so you can turn it off and on with a paddle somehow

I have done my share of night paddling, and I think that headlamps for night paddling can really spoil the fun and destroy your night vision.

While I don’t have an illuminated compass, it is on my wish list because I would have to turn on my head lamp less often if I had one.

@Allan Olesen said:
I have done my share of night paddling, and I think that headlamps for night paddling can really spoil the fun and destroy your night vision.

While I don’t have an illuminated compass, it is on my wish list because I would have to turn on my head lamp less often if I had one.

That’s why I’d prefer the compass to be lit and not use a headlamp. The theory behind using red light is that it doesn’t affect your night vision, but I’ve been doing some reasearch on that and it doesn’t seem to be a unversally accepted theory. It may be one of those things everyone needs to test for themselves. But yah, compass light is preferable.

Do y’all find that red light works better for YOU?

I have spent at lot of time in the woods after dark. Red doesn’t leave me without night vision when I turn it off and walk in the dark. If in the fog night vision isn’t of much use anyway. Though I haven’t paddled at night in the fog. Yes a lit compass would be nice. My GPS works well at night, and with a compass as back up, and the requirement for a light at night when I wear a waterproof headlamp that only gets used when needed I feel comfortable. One should also make sure that there isn’t any interference with the compass from any metal gear under or on the deck.

Here is the GRO light kit 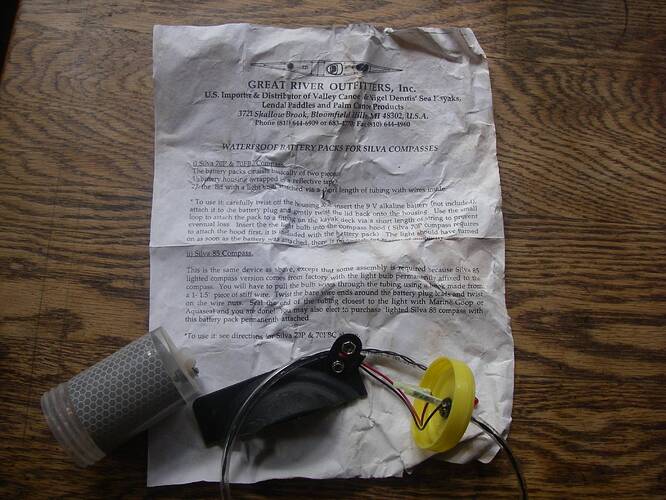 The commercially illuminated compasses that I have owned were very hard to read at night. The Silva 70UNE is pretty good, but still hard for my eyes to read.

Using an eGear light, such as shown by Leon Somme in the video, looks like a good idea for a compatible surface mount compass. Thanks for posting that! I have a love/hate relationship with eGear lights and they have failed me often, but are lightweight and convenient.

For long Watertribe events, that often require paddling through the night, I usually just rely on my headlight to read my compass. Not all headlights are created equal! I have gotten good service from Zebra lights. They have a “moonlight mode” of less than one lumen that work well for reading a compass at night (or for getting out of your tent to pee at 3AM) without blinding yourself or losing your night vision. Battery life in “moonlight mode” is days to months.

Usually for racing I will also have a GPS following a precise route, and include my Magnetic bearing, showing in the display to allow both the GPS and the compass to complement each other. If the compass is easily visible I prefer to look at the compass and transfer my bearing to a cloud/star/etc in the sky, and repeat often on a “fresh” target.

Thanks for posting that, Roym.Now that I’ve seen it I no longer want one!

That button-battery powered light or something similar looks like the way to go. Now that I think of it, I have a detachable red led bicycle taillight that might work, and can be turned on and off by pressing it. Pressing would work better than turning for a light that’s out of hand reach. Not sure how waterproof it is though.