Could an anchor replace a paddle float? physics question 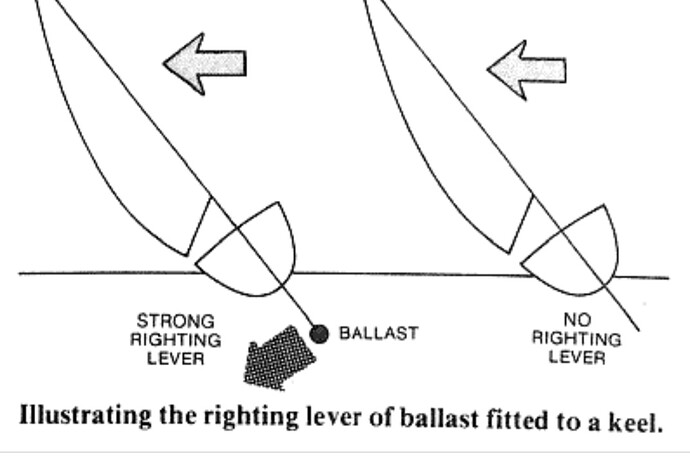 The further from center of gravity, the greater th effectiveness. Then you sacrifice speed and draft. I’d rather learn to roll.

15 pounds …boat weighs 60 pounds and your propose carrying that much, 25% dead weight? AND your expect to deploy it from ? Somewhere? Onboard when you are in the water. Y’all need to stop thinking so hard and get in the water.

Anchored…to the beam? Every wave when the rope gets tight the gunwhale goes down.

Anchor just hanging…how much weight hanging off the beam is enough to capsize the craft?

if i lowered the diving belt under the kayak with a rope (with some sort of harness so it is under the centre of the boat) , would the deeper i let it go down increase stability,

Sailboat analogy…What is important stability or kayak ability? A bulb keel would make for less rolling, but at what cost? Shallow draft? Ability to edge? Surf? Loss of “lively” in waves? Speed?

Harness…maybe but who wants to carry the weight and deploy it…previous comment.

cowboy scramble in a choppy sea.

Cowboy scramble…isn’t that coming up over the stern without the use of a paddle float? 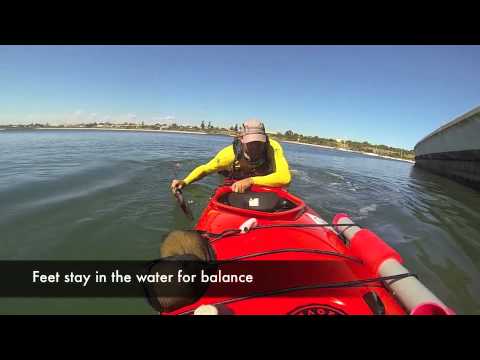 What part of this dosen’t include “fiddling around” ?

So playing with the idea of a weight, rope, and harness:
If you had a long kayak-

I think an older foam northwater paddle float had a waterfillable bag attached so that upon uprighting, one wouldn’t accidentally roll over the other side - giving a related type of stability.

so taking that weight idea only, and thinking of a reverse paddle ‘float’ motion:

we all know that the higher you load up your kayak, the easier it is to tip over.
if i took a 15lb diving belt and held it over my head on a kayak, i would cause a stability issue.

i am wondering if the opposite is true, if i lowered the diving belt under the kayak with a rope (with some sort of harness so it is under the centre of the boat) , would the deeper i let it go down increase stability, or is there a point where this maxes out?

if you do experiment at all, i for one would love to hear the results. my guesses: something rigidly fixed would work better than one hanging by a rope; small weights dangling from each side, rather than just under the middle, might serve you better; i’m sure fore-aft positioning would be as significant as above-below water-line positioning. I’d be curious what you find in the real world.

The length of the rope is completely irrelevant. What’s more important is that it’s completely impractical to carry enough weight to provide any meaningful aid to self rescue. The basic idea is flawed and speculating about it is a waste of time.

The basic idea is flawed and speculating about it is a waste of time.

I agree wholeheartedly, and experimenting with it would be an even bigger waste of time…

Now what if the small anchor was attached to an upside down parachute or something similar and attached to the side of the boat such that it would take it down and then it would open like an umbrella. It would react to a sudden pull but yield slowly to a gentle pull. It could even have a second rope attached to the other end for retrieval. I have my anchor set up like this for my canoe as it is light in weight but catches and hooks to hold me. pulling from the bottom end causes it to release.
The action of lifting yourself out of the water would have to be fast enough that the light sea anchor would hold the far side down.

Just a wild idea now that we have determined a anchor alone won’t work.

One of the rolls demonstrated in Greenland qajaq competitions is hand rolling while holding a brick. Anyone here ever tried it?

Saw a guy do it eating a candy bar.

I’m wondering if the weight of the brick is used to assist with angular momentum in the roll. Swing it to the side to get the roll started, then pull it straight in, like a figure skater spinning faster when they pull their arms in.

There’s a specific technique for doing it, but I can’t recall it at the moment. Try Googling “brick roll”.

One of the rolls demonstrated in Greenland qajaq competitions is hand rolling while holding a brick. Anyone here ever tried it?

Very likely, Gstamer can do it or has tried since he competed in Greenland. A couple of the past Walden “Pond Scum” (Greenland enthusiasts) can do it, but they don’t hang in these forums.

I’ve not tried it but I have watched Doug VanDoren roll with a bowling ball.

Exactly. It would have to be attached in a solid fashion to the boat. And at some point if the “arm” gets too long it would just create a drag issue and catch a lot of weeds. People ballast sea kayaks all the time for just this reason…but they do it inside the hatch.

Yeah, I could have decided to get back into skiing. Instead the desire to paddle struck in January.