Could an anchor replace a paddle float? physics question

we all know that the higher you load up your kayak, the easier it is to tip over.
if i took a 15lb diving belt and held it over my head on a kayak, i would cause a stability issue.

i am wondering if the opposite is true, if i lowered the diving belt under the kayak with a rope (with some sort of harness so it is under the centre of the boat) , would the deeper i let it go down increase stability, or is there a point where this maxes out?

some sort of lead weight. my idea , if this theory is plausible, is to use the smallest amount if lead, with a very long rope

Then it becomes just an anchor.

Ray Goodwin uses something like a sea anchor for self recuse in a canoe… see:

The weight would work best on a rigid fin like a sailboat keel. The further the weight got away from the centerline. The greater the righting force. Yet that would create other problems with draft and drag.

Yes the weight needs to be rigidly attached to the hull in order to provide righting moment. I don’t see how just hanging a weight in the water would do anything to improve stability.

Ballasted sailboats all have rigid keels for this purpose. (That’s 7,000 lb of lead in the case of my boat in the pics!) Notice that the keel has a bulb at the bottom to lower the center of gravity as much as possible. 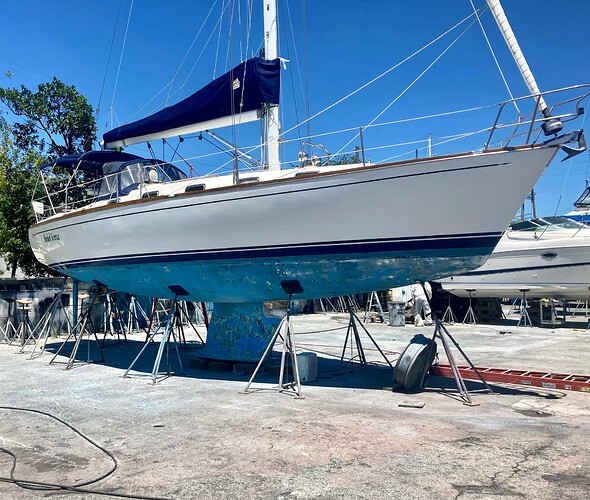 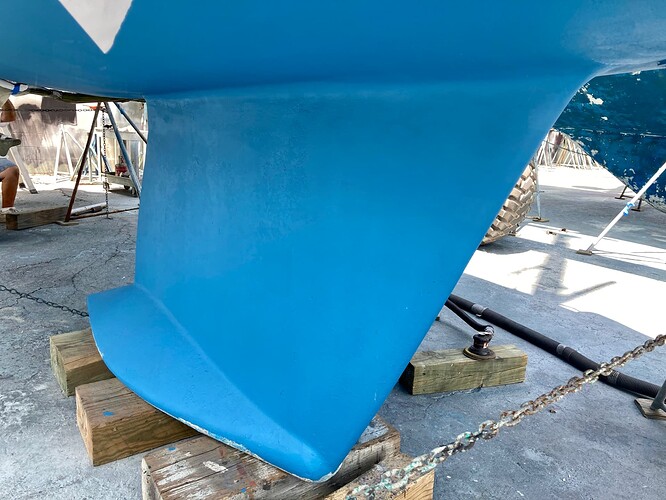 Gotta ask how Rocket Science got its name…

I’m a science and space nerd, and it’s a pretty quick boat, at least compared to my previous sailboats. Plus it’s a good conversation starter!

The boat was named “Outlaw” when I bought it. I seem to have a habit of buying sailboats with terrible names so I have had to rename most of them.

if i lowered the diving belt under the kayak with a rope (with some sort of harness so it is under the centre of the boat) , would the deeper i let it go down increase stability, or is there a point where this maxes out?

First off, I fail to see how this could be less fiddly than a paddle float. Second, with a weight attached to a rope, any off-center pressure on your kayak would just cause it to act like a pulley and “wind up” the weight. The righting force of a 15# weight would be negligible, certainly not enough to aid reentry in any meaningful way. If you’re lucky, it might right an empty kayak.

Probably also set up swinging like a pedulum and disrupt stability. Like a tethered load on a helicopter. If I’m saying that right.

Then there are the Giant Brains.

I don’t have no rockets and been told I ain’t got no brains. I’m happy with that. Remember that Mama Jyak always told me I was too smart for my own good.

@Randall I’m pretty new to kayaking and I haven’t actually used a paddle float yet (planning to buy one soon) but in all the videos and things I’ve watched, the point of the paddle float isn’t only to provide stability to the kayak to prevent it from flipping. It’s also to have another point of floatation that can be used to help get yourself up and back into the kayak. Sometimes hooking a leg over it, or using it to help boost their body up onto the kayak deck.

A weight under the kayak would not offer any of that assistance, and a weight on a long rope could create a risk of entanglement.

I don’t see how the length of the rope would matter. 15 pounds is 15 pounds no matter how long the rope. It seems like it would be a battle between your weight trying to pull the boat over on it’s side versus the weight-on-a-rope trying to keep the boat upright. Theoretically it might give you a little more stability but I suspect any improvement would be nominal (insofar as you weigh significantly more than the diving belt). It’s an empirical question though. Give it a try. I’m going to be doing a few experiments along these lines myself when the water warms up.

Would it be possible to use a dead horse instead of a weight.

Seems to me you ether need flotation on one side or weight on the other. The greater distance ether is placed the less you need of it. So if weight is the tool of choice then hanging it from the side is going to counteract your weight better than it in the center. The amount of weight needed is not going to be practical to carry and harder to deploy than floatation that has almost no weight and uses air that is always around.

My idea for weigh was to use the weight of a second companion boat pulled along side and attached with a stirrup that only joins the boats when the actual reentry is happening. I posted about it but it had little favor.

Would it be possible to use a dead horse instead of a weight.

But those float, don’t they?

Seriously, any weight hung from the boat needs a moment arm to help - half the beam of the boat won’t create much of a moment. Also, the buoyancy force on any submerged weight reduces its effective weight, making it even less effective. Also, the minimal effect of the weight and the buoyant force on it do not depend on how deep the weight might be.