Could I turn this into a whitewater tandem?

I picked up an old mohawk canoe. Confirmed it is a mohawk rouge from 1988. It’s 14ft ish long and the rocker is decent. 15 deep in the middle and 21 at the ends. I can find almost no information on it on the net. I am just wondering about freeboard at about 400lbs. It wide enough at about 31ish for me to think that it might be ok for tandem?

Its longer and wider than the esquif blast, but 15 deep rather than 16 of the blast.

Has anyone paddled this boat in tandem set up? It’s royalex and extremely heavy.

I was thinking of putting on this kit from mikeyee:

Or similar + a pump.

**Edit: It appears my measurements are wrong (I did it quickly). Beam sounds to 33 from other forums re: this boat. 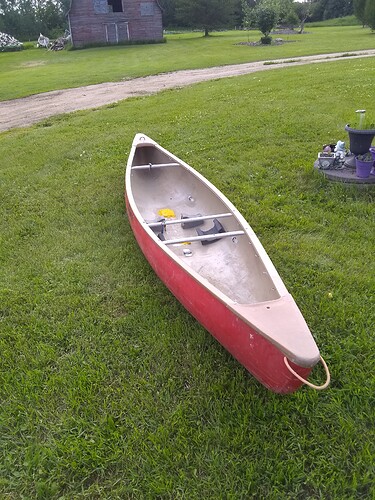 Sure. My Whitesell Piranha is 14’3", so length is good. You could even set it up with a triple saddle if you wanted to keep the option open to paddle it solo.

go for it, make sure the pump batteries are charged up, and bring a couple bailers. Getting soaked is half the fun. I converted a Whitesell Pirana into a tandem, and my son and I were about 400 combined. The Whitesell had a lot more volume than your Rogue, but we were amazingly dry in cl. 3 with it. We put pedestals close together, which helped handling at the expense of comfort for the rear paddler. In the end, we both really preferred solo, and I’d suggest a triple saddle arrangement, allowing tandem and solo.We did do a few nutty runs as a team, and seeing that barge buried to the gunwales both sides was a hoot.

A short narrow canoe does not really have the flotation to be used as a tandem boat. Maybe two smaller paddlers on a day trip. Good for kids, one person and a dog.

I like to take smaller tandems and turn them into solo boats. I just changed the seats and thwarts in a 15’7" OT Canadienne to solo. It works great.

when my son and I started soloing, he was paddling a Dagger Reflection 15 at age 11, and I was soloing a Swift Dumoine. Those boats really taught us to plan our lines or pay the consequences, but transitioning to a pair of Encores was like going from a school bus to a Lamborghini. That’s when the bigger boats became our poling choices.

You must have deep pockets, and a good amount of disposable income, if you’re considering doing a complete Mike Yee outfitting.
Probably cost you more, than what you paid for the boat.
Oh yeah! Mike Yee outfitting is quality alright, but are you gonna yank it all out, a year or two down the road when you decide that canoe is NOT the canoe you really want.
If I were you; I’d try to set my sights quite a bit lower on outfitting.

But, your boat, your pockets, your decision.
Good luck.

Yes, Whitesell Piranha works well for big adult, and a kid, or small lady, or a big dog up in the bow. So will a Mohawk XL 13, or a Dagger Caper. 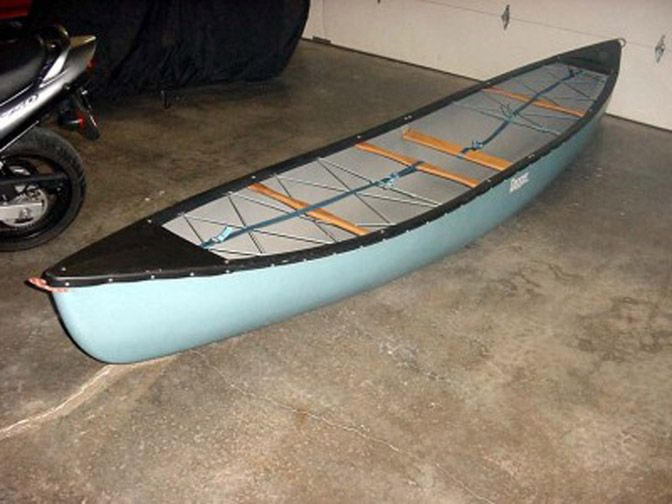 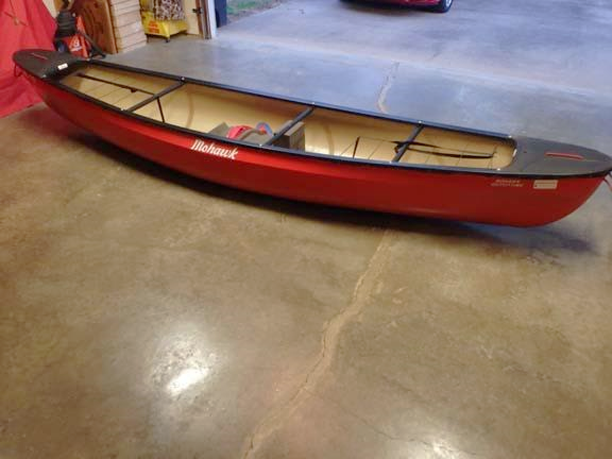 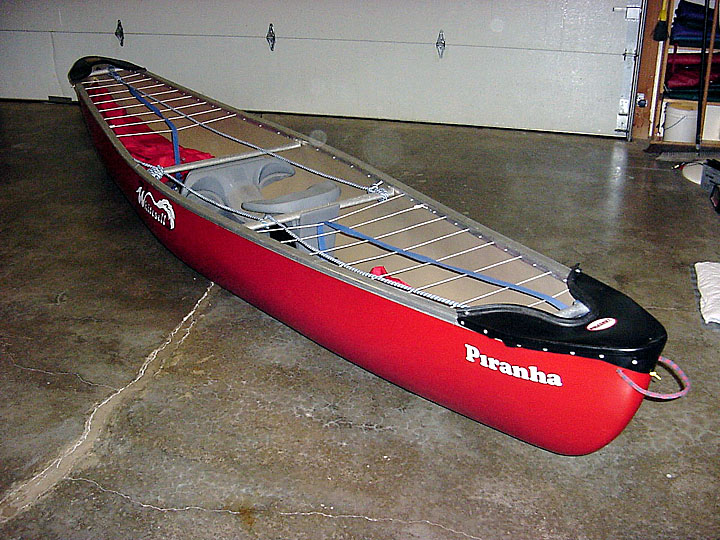 So only spend the money if the canoe costs more, then, you end up spending more money?? I don’t follow your logic.

OK; just forget about what you paid for the boat, and how much Mike Yee outfitting will cost you.

I’m guessing you got the boat cheap, and now you want to turn it into something it is not; a tandem. You can do that with some of the larger, high volume solos, and “maybe” the one you bought will work?

What class water did you try it on either solo or with a passenger?
Total amount of seat time you have in it?
And you’ve already decided on Mike Yee outfitting with the paddling season soon winding down. Your money, your decision.

How about test paddling some other canoes as the season winds down, and holding off on buying any outfitting at all?

How about doing some research on less expensive outfitting that will work? May not look as great as the Yee outfitting, but would work.

Maybe get some seat time in your new canoe with whomever you intend to paddle with? What kind of skills do you have? How about skill level of your proposed partner?

It’s not about how expensive your canoe is?
I’ve seen paddlers in a 15 hundred dollar canoe, with 6 hundred dollars of outfitting, a 2 hundred dollar paddle, and a hundred dollar helmet who couldn’t make a one boat eddy on a class 2+ river, if their live depended on it. Their boat and gear sure looked good, but they couldn’t paddle worth a damn! 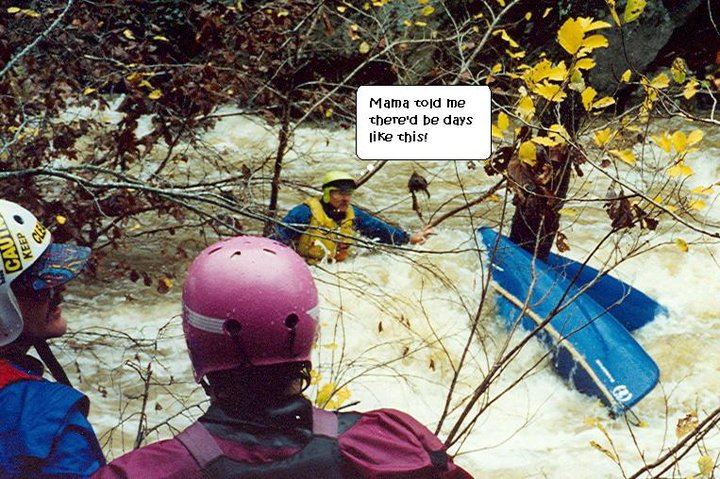 You want Mike Yee outfitting?
Go for it.
Post some photos, and let us know how it works for you.

Carol from Benscreek Canoe Club says it can be set up as a tandem.

Its about the same size as a Dagger Caption, and a Caption is frequently set up as a tandem. 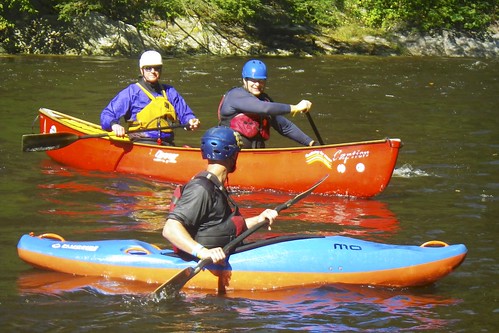 I couldn’t find much on the boat, but here is what cboats had:

I don’t see a lot of Mohawk canoes up here in the northeast, and when you do they are usually XL’s or Probes. If there’s enough room up front for the bow paddler to get their knees in comfortably I’d go for it.

If you have the money and a tandem partner then go for it.

By the way, those old Mohawks are tough boats. I wrapped my Whitewater 16 around a rock. 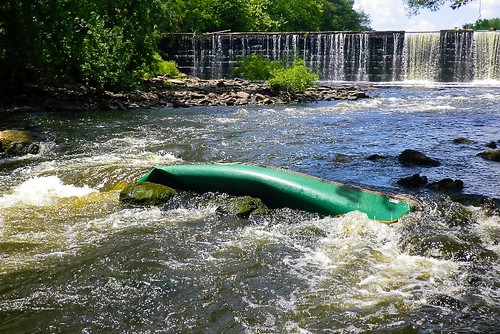 Took us three hours to get it out, but one foot stomp and it popped right back. I’ve been paddling it that way ever since.

Get some foam pedestals that you will likely use regardless of the final project. Place them loose in the boat (or use double sided carpet tape) and go test paddle it on flat water. Test the stability, test the tracking and turning. You should be able to get a sense of the boat before buying the Mike Yee kit.

Cue the music, “I like big boats (butts) I can not lie”. I never had a satisfying result paddling anything under 15" tandem in ww. Tried it just a few times. We had an old glass c2 we cut the middle hatch section out and put back together- definately a one and done paddling the “trout”. A regular swim fest trying to run laps at fayette station (New River). I also didn’t really care for how the madriver ME handled tandem (although I think it was just over 15 feet). Shorter canoes tend to be an “aggressive and wet ride” when paddled tandem. For me a short tandem handled better when both paddlers moved toward the center of the boat, but then vision became an issue for the moved up “stern” paddler to see around the “moved back” bow paddler.

Have you paddled a Dagger Caper, Dagger Caption, or Esquif Vertige X tandem, Tony? They are all very capable whitewater boats of around 14’ or a little more. They all do require the paddlers to be in a relatively close together “Gemini” position and in a kneeling posture. All are considerably drier than an ME or a Whitesell Piranha paddled tandem.

I never had the opportunity to paddle a Mohawk Probe 14 set up tandem but I have heard it fairly highly praised by a few whitewater open boaters I know.

Have you paddled a Dagger Caper, Dagger Caption, or Esquif Vertige X tandem, Tony? They are all very capable whitewater boats of around 14’ or a little more. They all do require the paddlers to be in a relatively close together “Gemini” position and in a kneeling posture.

I paddled in the front of the Caption once (well actually 3 runs on the upper section of the West in Jamaica VT), and it was a blast. Paddling a more traditional tripping canoe in whitewater is fun too, but different than a dedicated WW boat with pedestals. Truth is I am not very good at picking lines, so I would probably be better in the stern, but it is a lot more fun in the bow.

I haven’t gotten to paddle tandem bow on whitewater much but I agree it is a blast. All of the features are really “up close and personal” in that position, and if something bad is about to happen, the bow paddler always knows about it first. Stability is sometimes a little compromised because the bow paddler usually can’t spread their knees as much. Very quick cuts can be made from the bow station if the bow paddler is good with Duffeks and cross-Duffeks.

I find back ferries in strong current to be a bit of a challenge for the bow paddler as the downstream paddler is far and away in the best position to set and adjust the ferry angle. But looking forward from the bow the angle of the boat to the current is much harder to judge than looking down the length of the boat from the stern. So the bow paddler often has to look back over their shoulder while maintaining or correcting the ferry angle. Some people are good at that, but I get dyslexic when looking backward.

Very quick cuts can be made from the bow station if the bow paddler is good with Duffeks and cross-Duffeks.

You’re not kidding - plant the paddle and lean and the boat flies into eddies. We never tries a back ferry - we’d usually just spin the boat and paddle forward.

Yes, with today’s highly rockered and short whitewater canoes it is usually quicker, or at least as quick to spin the boat into a forward ferry. Which is in fact, one of the advantages of a short, whitewater tandem.

I pretty much missed out on the more modern “short canoes”. Although I did have a flashback and taurea for a while and struggled with them at times. My tandem paddling mostly involved tripping canoes but we ran some whitewater in them. Even today I have a poly mr adventurer but wouldn’t hesitate to take it out on a bit of class II + water although not designed for that. But the truth is that i rarely canoe anymore. Kneeling is no longer appealing… In general, ww canoes are a bit more difficult to carry and load. The last time I had the canoe out was an overnight a few years ago- it’s was just easier to throw stuff into the canoe than actually pack a kayak.

In terms of paddling style I think I do both 1) going slow, utilizing back ferries, giving the bow time to rise up over features (Bill Mason/Cliff Jacobson) or 2) using a more modern, aggressive approach(slalom based) that utilizes speed and punching through or across features. It’s all good. Even in a kayak you can back ferry and ride up over stuff. Mostly though I’m a “float and brace” kinda guy.

I’ve open boated the kayak a few times- forgot the sprayskirt and ran the dry lines. I’m a kayaker that doesn’t mind a little water sloshin’ around in the boat. It’s all good! What is special about your boat, whatever type it is, it’s getting you out on the water. So do what you like and have fun. Be a legend in your own mind and enjoy it. Versatile ww paddlers can adjust their style to different craft and different styles of water. I’m not really great at anything, but hey I can paddle anything a little bit…well maybe not a sea kayak, but hey, I’m willing to learn!