Are there any downsides to converting my rudder to a fixed “skeg” somehow, assuming I don’t want to use the rudder as intended? I know (assume?) it won’t function the same as an internally mounted skeg, as it will sit more aft. But external skegs are not uncommon, and I’d occasionally like help with weathercocking, etc. when it arises. One challenge I forsee is getting the blade aligned perfectly in the neutral position. But otherwise, any reasons not to do this?

Well it shouldn’t be hard to put something on that has a channel to hold it in one place, kayak construction and rudder design being key to how to do it. Something like a V block that the rudder sits in when fully deployed. Unlike a skeg you won’t have a lot of ability to adjust the depth it’s at easily since usually rudders are free swinging up and down with a rope. It should be easy to somehow lock the pedals in place as a temporary measure to see how it works before doing a more permanent change.

Interesting idea to lock the pedals in place beforehand. I’ll want to lock them in place eventually as foot braces anyway. Thanks for that.

I had thought with the rope I’d add a clam or skeg line cleat that allows you to regulate how much rope you let out. I think my current rudder is spring-loaded to stay down, so an equally opposing force might keep it in place at the desired angle.

If it is a flip down rudder,you likely could just find a way to lock the cables in place with rudder straight and be good to go. The rudder if flipped down, it would be a skeg. Whether up or down, any slider pedals would be locked in place.

On my Prijon Taifun (whitewater) a previous owner installed a fixed rudder-skeg. And now it hardly wants to turn. So my advice… try paddling with the rudder straight and see how she turns.

I’ve used external skegs near the stern before, and they will make a kayak very hard to turn if fully deployed. And in any breeze, the kayak will turn downwind and nothing else. With the fixed “rudder as skeg” idea, you can overcome this by deploying the rudder only partially so there is less blade in the water, maybe with it at a 45 degree angle off the stern. But dialing in just the right amount of deployment so that the kayak doesn’t weathercock but also goes in the intended direction is touchy. A quarter inch up or down on the retract/deploy line can completely change the kayak’s behavior. Also note that a rudder only deployed part way will have a lot more force trying to make it turn on its pivot, so whatever mechanism fixes it in the straight position will have to resist this.

Thanks, all, for the helpful replies. Nothing I’m doing is irreversible. Hopefully, I can get out on the Bay this weekend and test what I’ve come up with and report back. Cheers.

With a fixed skeg take into consideration what will happen when launching and landing as well as if you hit a submerged object. OEM skegs and rudders are designed to kick up to prevent damage if you forget to retract them.

The rudder/skeg will kick up as it always does. It’ll just be fixed from side-to-side movement.

Will you be able to adjust your rudder into any position between fully up and fully down? If not, I think you will not get the benefit you intend.

I don’t really understand the desire to change a rudder to a skeg. Although a rudder can be used to steer a kayak, its true purpose, like with a skeg, is to compensate for the effects of wind and current and keep the boat going straight without having to compensate by uneven paddling on both sides or edging the boat, thus increasing efficiency.

If the issue is that you have a boat with sliding rudder pegs to control the rudder, then why not upgrade to a “gas pedal” design with fixed pedals like these.

A significant number of people I know consider rudders to be more reliable as they don’t jam and result in a kinked cable. A temporary repair for a broken rudder cable is usually simpler than a temporary skeg repair. Of course a lot of my friends prefer skegs as well. One of the great debates in kayaking.

I made two adjustable “stops” (see the image) that prevent the rudder from pivoting left or right. That should be sturdy enough to give it a go.

Thanks for the replies, all. 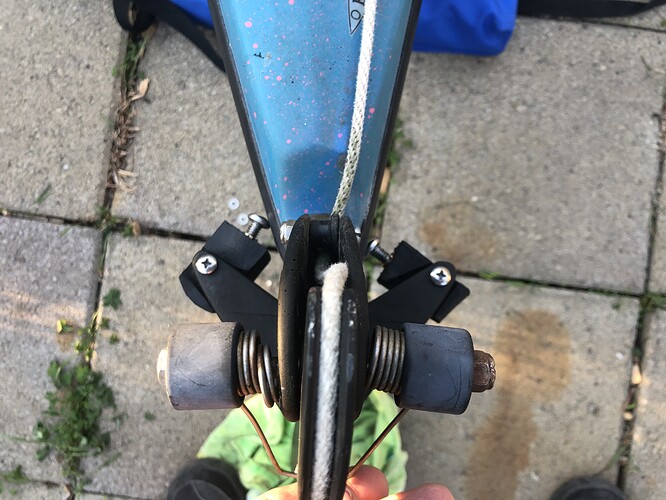 Thanks for the replies, all.

It’s fun to experiment, so let us know what you find.

Be an interesting experiment. A couple of things to consider.

With your new skeg actually behind the kayak, rather than about two thirds back, the increased lever arm will may cause a large difference in how it tracks with relatively small changes in how far it is deployed.

Especially when partially deployed the amount of skeg in the water will be constantly changing if you paddle in all but dead calm water. In my ruddered boat, with short steep waves and a strong stern quartering wind, the rudder will occasionally be totally out of the water. It can be interesting as the rudder clears the water, the stern starts to swing around, and then the rudder suddenly catches again. A boat with an OEM skeg located on the bottom of the hull does not suffer this effect.

Took it out today. Deployed the rudder/skeg in pretty calm waters. Boat immediately pulled hard left, probably due to the fact that it’s nigh impossible to get something that is intended to swivel back and forth to point perfectly straight. As I moved into wind and the boat started weathercocking some, dropping the skeg helped tremendously, but it did matter how much I dipped the blade in the water (obviously). And it was at the cost of some drag and turning.

So it sort of worked; it did successfully mitigate weathercocking in some circumstances without my having to fuss with sliding peddles, and that was welcome. But the rudder goes back to normal. If I decide I want to use it, I’ll invest in the “gas pedal” controllers.

Thanks all for playing along.

But on a 17’ boat, it’s hard to see that far back to know what is going on. Trial and error helped some, but fine-tuning such a heavy, spring-loaded mechanism (my old rudder is heavy, anyway) with a rope and a clam cleat seemed elusive.

This was my exact thought when I asked. The mechanism is made for moving the rudder from parked position to deployed position in one go. It has never been intended as a mechanism for partial deployment, and consequently I would not expect it to be very usable for that purpose.