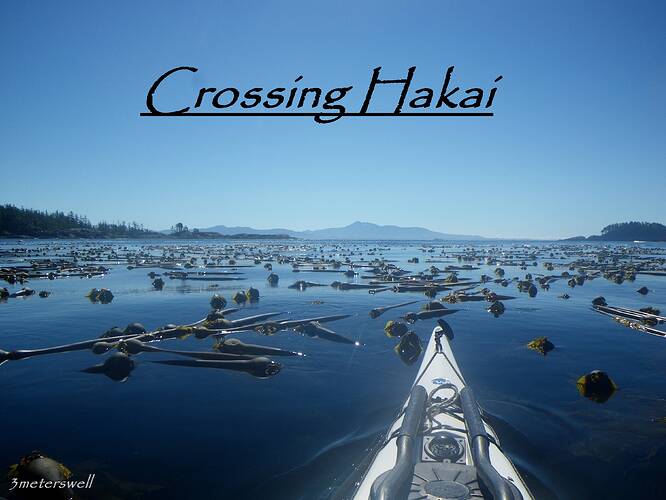 I was traveling southeast along the Central BC Coast from Triquet to Calvert Island. Conditions were NW @ 10-15 knots with swells at 2 meter topped with windwaves. The route I chose to the Choked Passage complex was 8.5 NM of open water across Kildidt Sound and my crossing of Hakai Passage ended up being further west than intended. That wasn’t a big deal as conditions were mostly at my back and I was having a really good time. The wind was increasing and stacking wind waves on the swell but I expected things to lay down a bit in Hakai with the wind, current and swell all trending in the same general direction. 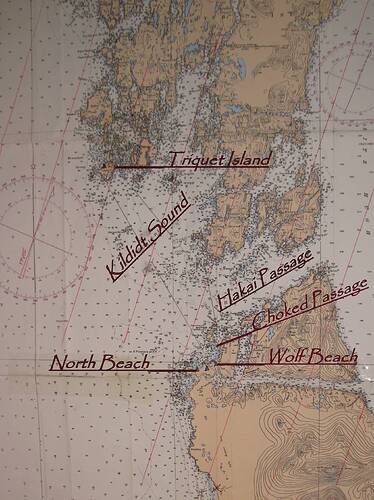 About midway across Hakai I could see the sun reflecting differently off of the surface of the water indicating a change in texture, the harbinger of large westward flowing rips that lay in my path. It was nearing high slack and I was expecting to find conditions optimal for the time of day so this surprised me. The chop associated with the rip was above my head. Paddling was “active” and enjoyable but it went on for too long. I was at least 2 miles from anything, feeling exposed and was ready to do something else before it was ready to be done with me. Once past the first rip things laid down but then picked up again as I crossed two more large rips with peaky waves over my head.

I was pleasantly surprised to find a significant current flowing out of Choked Passage directly into the wind and swell that formed up into very nice, steeply-faced waves that spilled but didn’t break. I rode them directly into the bay in front of North Beach and then paused to get my bearings. 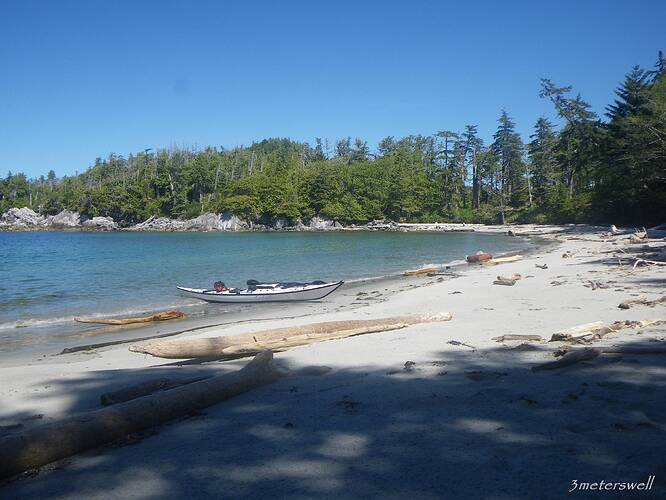 At about 200 meters in length No-Name is small by Calvert Island standards and has a very right-sized feel but the foreshore is shallow and rocky making comings and goings at low tides complicated at best. I would be leaving in the morning near low slack and that made camping at No-Name a non-starter. After lunch I paddled around the headland that separates No-Name from Wolf Beach and camped at its west end. 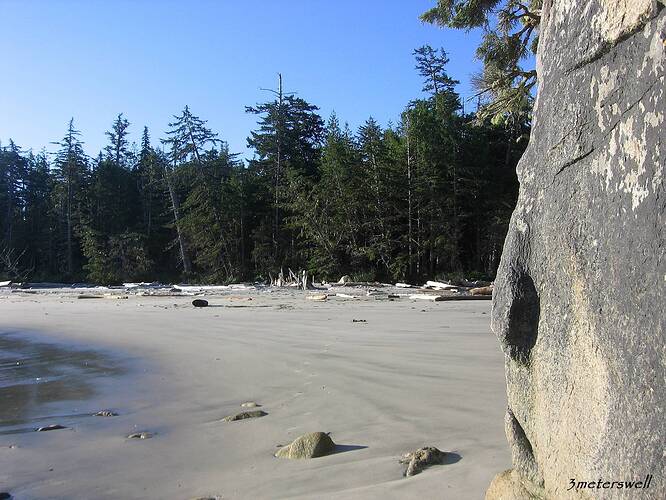 I’ve crossed Hakai Passage on five occasions and it always has my respect and gains my full attention. On the best of times it isn’t scary but simply bigger than anything else nearby. The conditions this day were near perfect yet those rips were totally unexpected and reminiscent of paddling in a washing machine.

Went to Google Maps for a better look. Such a beautiful area. What is floating in the water in your first photo? How did you get to Triquet Island?

@Rookie said:
Went to Google Maps for a better look. Such a beautiful area. What is floating in the water in your first photo? How did you get to Triquet Island?

That is Bull Kelp. It grows in areas that are less than 90 feet deep. It’s a super critical component of the coastal ecosystem. A real pain if you have to paddle through it but a gift when conditions get big and you need a place to hide. It robs the swell of energy so when things get big you can find a safe place where things are going up and down but no longer breaking. It is also edible though not particularly tasty and it has a carb that we don’t process so you may get a stomach ache. You won’t starve, though.

I started at Klemtu and took about a week to reach Triquet, though, I was weathered in at the Goose Group for a day or so. You can get to Triquet from Bella Bella in 2 or 3 days depending on tides and weather. I know some guys who got there in a very long day but conditions aligned and their goal was getting to Port Hardy as fast as possible.

If you are interested in the history of human occupation of North America take a look at Triquet and Calvert Islands. Both figure prominently and the primary campsite on Triquet is at the site of habitation dating back 14,400 years. Calvert discoveries date back to 13,000+ years or so. Throughout the Central and North BC Coastline historical remnants of First Nations occupation support their verbal history of ice-free areas and continuous occupation.

@Chodups
Thanks for that info, Such a fascinating planet we have. Appreciate the suggestion to read about Triquet and Calvert Islands. Intriguing places; it must be quite an experience to visit them.

Wow - that is impressive - I’m such a wimp when it comes to ocean paddling.

Thanks for sharing. Added to my list of places to visit.