Curious how do you get back in a canoe? 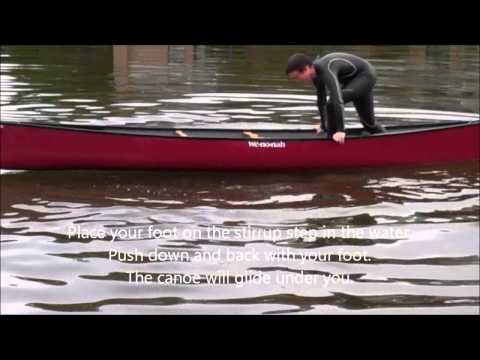 Laughed out loud thinking about an old guy I know with belly doing that. (Trying to do).

If the guy was my size the stern would be underwater.

99% of the time it involves getting to shore ( by swimming or getting towed by other paddlers). Dumping the water out of the boat (it is easier to do this if you don’t pull the boat all the way up on shore but roll it over and drag one end up, then raise the other end up that is still in the water) and then climb back in where it is shallow or using the shoreline to step back in.

We used to practice climbing back in the boat while still remaining in the water (over our head). Again, it is helpful to have others to assist. They can help hold the boat while you climb in.

Tandem was easier than solo. You could both scramble in at the same time and the other paddler acts as a counter weight. If the boat is swamped it is easier to reenter but very difficult to paddle to shore. Some canoes want to roll back over when swamped.

People do canoe over canoe rescues to get the water out and help hold the boat while the swimmers reenter. All of this is a bit academic if the reason why you capsized was “rough conditions”. In that case you may find yourself using the boat as flotation as you get blown to shore or may actually help swim the boat to shore. You won’t find me trying to empty your boat with a canoe over canoe rescue on a windy lake. Self preservation being key.

Something that doesn’t seem to make it into the “how to” manuals is rafting up. Tying a bunch of boats together- even swamped boats become stable and pulling in swimmers becomes much easier and the swamped boat can be bailed out. I discovered this canoe sailing with multiple canoes tied into a single group and hoisting a dining fly. “Canoe sailing” was actually a pretty safe option when you had the wind working with you but encountered whitecaps or rollers. When I did it for safety we just never put up the sail (dining fly) and we would sometimes still swamp out if things became too rough but we were stable and all together.

If the wind was against us and rough then we were simply windbound. The usual strategy was to leave in the early am the next day. The situation you wanted to avoid was paddling with strong head or cross winds where waves would pick up. Not only was it frustrating to make progress but the danger of people getting scattered and capsizing, and swimming made you think twice. An ounce of prevention is worth a pound of cure.

If I have gear in the boat, I can climb in over the stern, but the best part about paddling in Texas is if you turn over, you can usually just stand up and sit back down in the boat.

There are several techniques recommended by reputable institutions online, and lots of YouTube demos, some good, some bad, some misinformed. As suggested, I have a hard time believing many of these would work when a capsize is most likely, i.e. in ‘rough conditions’ on a open water body.

Most important is to try with your canoe in conditions you may encounter. Different body types and strengths will have different abilities. Some folks are capable of things I am not, and canoe weights and buoyancies differ widely.

I have discovered that my canoe is neutrally buoyant, and the middle of the gunnel rides below water level when it swamps, so trying to empty it out with a bailer, pump, etc is not going to happen without extra flotation. I’ve played around with adding flotation but decided that, again, when I’m likely to flip, conditions would warrant A LOT of floatation to execute a mid-lake self-rescue. As a result, when I paddle alone, I paddle within a quick swim of shore.

Me too. I can do a heel hook or use a stirrup if someone is counterbalancing… Not everything works for everyone

actually most capsizes don’t happen in rough water. Sure they can happen but most happen when someone is not paying attention to the position of their head in relation to the water. Turning your head to look in back of you is a very common cause. That said rough water should be in everyone’s mind. If you can’t get back in in calm water, sit in camp when its rough.

The most common capsize scenario? And we have all done it. Entering or exiting the canoe. Fortunately this is not life threating just plain embarrassing.

I was young and strong then …and skinnier.

So many factors go into reentry of a canoe starting with self or assisted. Then you have what prior risk assessments you made prior based around if the reentry will be assisted or self. How you have your canoe outfitted in terms of additional flotation is also a factor and if it took on water in the process of you exiting it or not. Then there is the environmental factors, depth or water, temp of water, temp of air, speed of water, distance from land and how you are dressed for conditions.

In my case I have bow and stern floatation inside the canoe in the form of airbags. They help the canoe ride higher in the event of taking on water that after reentry it will be high enough to be bailed. I have two methods for bailing a scoop and a hand operated pump. They also leave you high enough to still paddle if you take that route. Bow and stern flotation do nothing to prevent capsizing, but do aid in righting the boat although you will take on water doing it. Side bags inside the canoe will greatly help on righting without taking on much water.

After a lot of thought on this matter it is my opinion that sponsons placed above the water line and below the gunwale enough to not interfere with paddling could be of great assistance in conjunction with bow and stern airbag for a complete system for casual rec-canoeing.

I have a type of entry ladder/stirrup that uses the rafting concept mentioned above for assisted reentry. It uses the idea of stirrup that reaches across the canoe and a hook to grab the gunwale of the assisting canoe. In this way when weight is transferred to the stirrup it pulls the two boats together and the second person doesn’t have to lean into the canoe to hold it down they can remain balanced as once the person reenters their canoe the rafting effect is gone. I started a thread on the concept and it got mixed reviews.

Many feel a stirrup is used as a method of climbing straight out of the water like a pool ladder and I find it is more of giving you something to push on with a leg while trying to do the belly flop over the gunwale just one more point of contact. Here is the link.
Assisted Rescue Stirrup

I have a couple friends that have Sportspal canoes with sponsons they use for hunting and fishing and they love the sponsons and their purpose. Others I know take them off not liking the added width and them snagging on stuff. For me and my usage of the canoe I have I don’t feel the need for extra extreme stability but would be nice for solo reentry stability, but seldom needed with our usage. Like someone pointed out above much of our paddling is in water depth you can stand on the bottom and if not a short swim to shore and in that case my painter lines are the important item.

This would be a lot more difficult if he was WEARING A PFD!!

Good advice, spoken from experience. Whether it’s canoes or kayaks, when the odd squall blows through, rafting up has a lot of advantages, not the least of which is stability and sticking together.

Me too. Hop back in like a bunny rabbit, quick as a wink. Fast forward 50 years and comedy central could film it as sea slug attempts reentry. What was a real challenge was dealing with a fully loaded, capsized canoe. Always an ugly mess.